Share All sharing options for: Bands Of The Pac-10: Washington State Cougars

[Taking a review of the bands of the Pac-10, just in time for the Pac-10 to no longer exist:  Already looked at UW]

Today, let’s take a gander at the Washington State Marching Band.  There is definitely a black hole of information about Washington State.  Very few people know a lot about Pullman, Wa.  In fact, elementary school students recently told me that it took them 45 minutes for them to find Pullman, Wa on a map.

Then again, it’s so tough to find that place all tucked away down there.

So, I thought I’d continue our poorly timed discussion of the bands of the Pac-10 (sorry Utah and Colorado) by taking a closer look at the WSU Marching Band.  Oddly enough, this post is incredibly sarcastic.  I didn’t intend for that to be the case, I really just wanted to do a straight review of the band and then totally bash it in the penultimate section.  However, everytime I read something about the WSU band, it jumped out at me as eminently mockable.  Let me be the first to apologize to the WSU band, but, seriously, how can you have a big "tradition" where the Sousaphones march with their flies down and expect me to sit on my hands?  I’m only human!  I don’t know why Pullman is an irony free zone, but it appears that it is.

After the jump, we continue our slow march through the Bands of the Pac-10 with the Washington State University Marching Band!  GO BEARS!

OK, this is the oddest thing ever.  I can’t find anything on the history of the WSU marching band.  Search after search - nothing.  The actual WSU band website:  bupkis.

Do you think its possible that the WSU Marching Band is a series of replicants sent from the future to destroy America one version of "Don’t Stop Believing" at a time?  Perhaps.  It seems more likely than not.

Bottom line:  Keep all energon cubes away from Eastern Washington and hopefully, the WSU Marching Band will run out of juice.

If anybody knows where to find the history of the WSU Marching Band, don’t hesitate to drop that info in the comments.  Otherwise, I am going to assume that time travelers from the future really, really, REALLY suck at football.

And yes, it did even happen to the WSU marching band sousaphones.

3. Flies Down Show
- Once a season we pick a game and march the half time show with our flies down, it's very cold and reminds us that we are cougars, unfortunately the new uniforms make it impossible to do this tradition so it is dying out last occurrence of the FDS was 2000.

Yes, que disasteridad.  Their flies down show, where they march with their flies down (and remember all the fans are so far away from the band during performances they can barely see if somebody is in uniform let alone has their fly down), has died out.  DAMN YOU, NEW UNIFORMS!  DAMN YOU ALL TO HECK!  WHY MUST YOU TAUNT THE WSU BAND SOUSAPHONES???  WHAT DID THE WSU BAND SOUSAPHONES EVER DO TO YOU!??!!?

ALL THEY EVER WANTED TO DO WAS MARCH AROUND A FIELD AT A FAST PACE HUNDREDS OF FEET AWAY FROM THE FANS WITH THEIR ZIPPER 3 INCHES LOWER THAN MOST OTHER SHOWS!?!?!?

One of the traditions of the WSU marching band is to give you nightmares each evening: 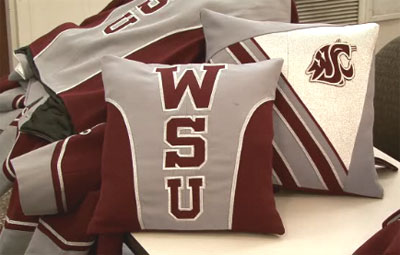 Those are made from real marching band uniforms!  What the what??  Any parent who gives those to their child should be investigated by CPS!  Do you think that each year the WSU Marching Band members slough off their exoskeleton to be used in the creation of these skin pillows??????????  I have no evidence that they DON’T!  Honestly, I have yet to find a single piece of information that the WSU Marching Band is compromised of actual human beings.

Here is another tradition of the WSU trumpet section:

We Don’t Sit
During every rehearsal, we stand. No one in the Trumpet Section sits like the Flute or Clarinet Sections. We play "balls to the wall" sometimes, and in order to do this, it is vital to stand when attempting to achieve the trumpet wall of sound. In other words, take your part up!

Ya~!  Hardcore!  Standing!  Trumpets!  Unlike every other trumpet section, which, actually, no they stand, too.  Fuck, I think the Cal Band Trumpets practice in the Crow yoga pose.

But why should I put the trumpets down.  I mean they do play "balls to the wall" sometimes.  Other times?  They don’t try.  I guess they put other body parts to the wall.  Arms.  Legs.  Foreheads.

They have professional staff here.

But they also have some student staff, including not one, but two drum majors.

What is it with the state of Washington?  Everybody has to have 2 drum majors.  Thats like a 200% increase over Cal’s 1 drum major (note:  Humanities major attempting basic math).  Why do the people in Washington need so many Drum Majors?  What are they trying to hide? What they overcompensating for?  We get the job done with 1 Drum Major and that’s the way we like it!

And that’s the Vice President!  Gotta do the slideshow.  That and break ties in the Band Senate.  But mostly the side show.  They have a full year to come up with the sideshow.  This  must be the greatest frigging sideshow of all time.  I actually really want to see the sideshow now.  I bet you its like 3D with Michael Bay-style special FX.

"I don’t remember Transformers attacking the band in the middle of a giant terrorist attack.  And where did all these scantily clad hot band babes come from?  Believe me, they’re definitely not students at WSU.  That much we know!"

I wonder what happens if the WSU Band Council President gets assassinated and the Vice President steps into their shoes.  WHO WILL TAKE CARE OF THE SLIDESHOW?!?!?!?

According to Wikipedia, they have about 250 members with the following instrumentation:

Similar to the Cal Band instrumentation, although I am not entirely certain what a Euphonium is.  One would think that it is an instrument based on a Euphonia, but I don’t know what that word means. A recent google search indicated that the Euphonia is a type of Finch bird with a delightful color scheme:

Most euphonias are dark metallic blue above and bright yellow below.

So, I am going to go on the working assumption that the WSU marching band is physically abusing Cal colored birds on the field.  Why would they do this?  I guess living in Eastern Washington turns you.  It just turns you, man.  You can’t understand it.  Or, again, they are demon orcs sent from the center of Hades itself.  That would explain all the red.

They are all so good!

Although I must admit that I do enjoy the intro to this version:

The Fight Song was written in 1919 as part of a class project for some students.  Wonder what grade they got on that?    Here are the lyrics:

Why The Cal Band Is Superior

Before you read any further, ask yourself "Would you have to be paid to root for Cal?"  The answer, most likely, is no.  If the answer is yes, go back to ATQ and seek professional psychiatric help immediately.

Well, if you are WSU, I guess you do have to get paid to root for the Cougars:

They get paid to be in the band!!!!  I mean I guess that makes sense.  You’d have to pay me to root for Washington State.  Why would the WSU students be any different?  I watch one WSU game a year and I can barely handle it.  They have to watch like at least, what, 3 games a year?  There isn’t enough money in Zimbabwe for anybody to do that!

Are there other benefits to playing in the Marching Band?
One of the advantages of membership in the Marching Band is the friendships that are made with the other students. The Freshmen Band members will automatically have over 200 new friends before classes begin.

Do they clip your mittens to your jacket before each Marching Band practice, too?  Do they write your name on the collar of your shirt?  Yay!  200 new friends!  I can’t get friends otherwise, I know I’ll join the WSU band.  Then, they’ll be FORCED to be my friend!!

In the Cal band, everybody is your enemy and that is how it should be!  You are in constant fear of getting pantsed or, worse, somebody yelling "Hey [Twist], your mom called, she said you suck!"  Speaking of which, my mother had never actually called a single one of those times.  People were just making it up every time!  And that soul crushing experience is the way it SHOULD be!  See, marching band shouldn’t be like kindergarten.

"Dear Johnny’s teacher, Johnny has major social anxiety issues, won’t share, and has trouble making friends, can you make sure to put him in time out or, failing that, help him join the WSU band."


Finally, most importantly, the #1 reason that the Cal band is better than the WSU band:  We memorize our goddamned music:

With so many different shows, does the band memorize the music and moves?
Music memorization is only required for the Drumline. However, the entire band is pushed to memorize pep tunes such as those played during pregame. 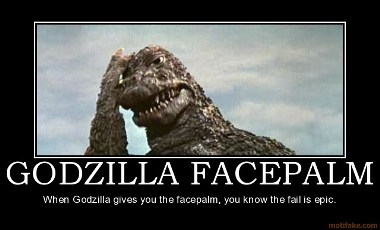 None.  Nobody has ever seen the WSU band in action.  I swear to everything holy, they don’t exist!  THEY ARE TRYING TO BURROW INTO OUR BRAINS AND EAT THE DELICIOUS GOO INSIDE!!! IF YOU SEE A WASHINGTON STATE FUTURE ALIEN PIRATE NINJA COMING YOUR WAY, JUST RUN!  YOU WON’T HAVE A MOMENT TO THINK IT OVER, JUST MAKE A BREAK FOR IT!

You can thank me later.