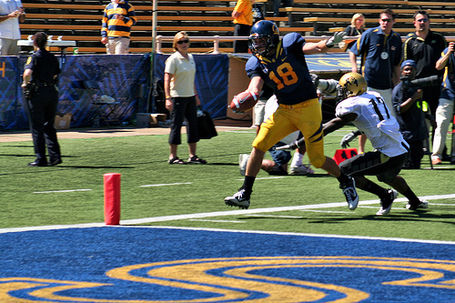 Apparently John Elway didn't come to the Big Game to just root on Andrew Luck and the Furd.

Mike Mohamed gets to join his old battery-mate Syd'Quan Thompson, as he gets picked up by the Denver Broncos in the sixth round of the 2011 NFL Draft. Mohamed is all-around solid and has a high IQ that could be essential to his survival in the league, plus he's able to make plays on the ball and occasionally get pressure on the quarterback. He's one of the most productive Cal linebackers of all time, and it's hard to not see him fitting somewhere in the league in the near future.

Mohamed has his work cut out for him in Denver. The linebacking corps is stuffed, and he'll have to perform very well in training camp to earn a spot. But a good performance could ensure that he ends up playing somewhere, whether on the practice squad or on the 53 man roster this season (if there is a season)

Cal fans, let Broncos fans know about the type of player they got in Mohamed at our Denver SB Nation site, Mile High Report!  For Broncos fans dropping by, check out our posts on Mohamed.