Share All sharing options for: Cameron Jordan Heading To The Big Easy: New Orleans Saints Take Him With 24th Pick 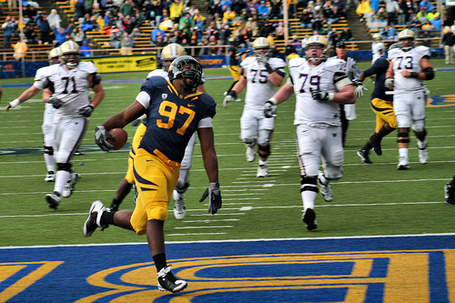 Jordan's athleticism made him an early favorite among NFL general managers. His ability to play multiple positions, rush the passer, stuff the run, and strip the ball makes him the sort of playmaker that can instantly upgrade a weak run defense. His familiarity with both the 3-4 and 4-3 schemes should help plug him in with his new team, and he should be in good shape.

For those reading the site for the first time, check out all our awesome posts on Jordan.

Discuss Jordan and the pick here! (To discuss the rest of the NFL first round, go to the open thread). To pump up the pick to Saints fans, head to their SB Nation site, Canal Street Chronicles. GO BEARS!