Share All sharing options for: Remembering The Seniors: Darian Hagan

We are looking back at some of the contributions of players leaving the Cal football team.  We've looked at Cameron Jordan, Kevin Riley, Mike Mohamed, Shane Vereen, Chris Conte, Jeremy Ross, and today Darian Hagan.]

TwistNHook:  The first thing that pops to mind about Darian Hagan is the emotional situation surrounding his daughter's health.  His daughter was battling a rare form of cancer.  He did not actually tell anybody on the team.  Fortunately, she survived.  He emerged from that unsettling situation this past season and played so well in light of what he had gone through.  I wish him nothing but the best with his life and his family.

What are your memories of Darian Hagan?

OhioBear: Darian Hagan had an inauspicious start as a Cal Bear.  He was put in the game as a redshirt freshman in the Colorado State game in the 2007 season with Cal holding a seemingly comfortable 34-14 lead with under 5 minutes remaining.  Hagan proceeded to get burned for a long TD, gave us a slight scare in the last few minutes, and (I got the feeling) got himself in the doghouse with the defensive coaching staff.

But then in 2008, Hagan improved greatly.  He left an impression right from the beginning in the Michigan State game.  Yeah, Mark Dell went for a couple of hundy receiving in that game, but Hagan still showed flashes of improvement in his cover skills.  By the time 2008 ended (a season featuring one of Cal's best defenses in recent memory), Hagan was a strength of the secondary, holding his own as other teams stayed away from Syd'Quan Thompson on the other side.  After the way he played in 2008, I thought Hagan was destined to be "next" to SQT as Cal's next shutdown corner.  Really, I thought that.
But then 2009 seemed to be a step back.  Now we know that Hagan had much more important things than football on his mind.  Hagan never quite got back to the level of his 2008 season.  But I will still remember him as a guy who overcame some adversity and stuck with the program

Kodiak:  Darian Hagan makes me think "what might have been."  He was a highly acclaimed recruit and seemed to flash an incredible amount of promise as a soph.  Thanks to Follett's ability to provide a persistent pass-rushing threat, Hagan teamed up w/ Syd to form an incredible ball-hawking duo.  The future looked really bright.  But his junior year just didn't work out.  Not only did we lack a pass-rush, but there were holes all over our pass defense due to inexperienced players at LB and S.  Hagan's performance really suffered and he ended up being in and out of the lineup.  Many of us suspected injury.  It was only after the fact that the tragic news of his daughter's health struggles came out.  As a father of two little girls, I can't imagine how hard it would have been to juggle Cal academics along with trying to play at a Div-I level.  If nothing else, we should appreciate his strength in working through this and being able to still play for us as a senior.

Solarise: Agree w/ Ohio Bear on the memories of Hagan.  Let me just add that under Coach P last season, Darian got a chance to flash his speed on corner blitzes.  His sacks on Kevin Prince of UCLA stood out in my mind.  The Bears defensive backs rarely get the chance to pressure QBs.  Hagan made the best out of his opportunities putting Prince on the ground on a glorious day. 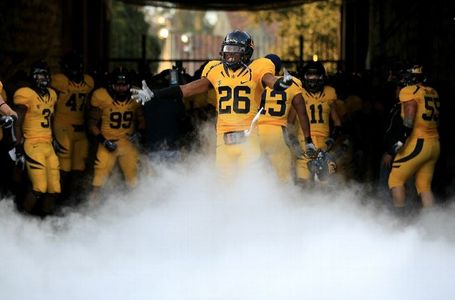 TwistNHook:  Of course, another memory that pops into my head with Hagan is how frustratingly well he played against Arizona in 2010.  He really helped shut down that high powered Air Raid Offense at Arizona!  He even played near flawless D on a desperation long bomb at the end of the game.  Unfortunately, the Arizona WR came down with the ball and Arizona went on to win the game.  It just reminded me that Cal can play near perfect and we'll still get our hearts crushed.

Solarise:  The AZ WR you speak of is Juron Criner, arguably the best Pac-10 receiver in 2010. Hagan had blanked Criner all day until that last drive. I don't blame him for biting on the fade & cutback resulting in Criner's TD. The offense had a significant advantage in that situation 1on1.

NorCalNick:  In retrospect, his fumble return touchdown against Colorado might have been the high point of the year in Cal football, and likely the highlight moment of Hagan's Cal career.  The game wasn't long after news of his daughter's illness came out, and Hagan's family has connections to the Colorado program, so he was focused on that week.  Sure, 2010 didn't end great, but when you're dealing with real problems off the field, there can't be many things better than getting to play football and scoring a touchdown.  So that'll be the play I remember Darian Hagan by.

OhioBear:  Best nickname that never caught on:  DARIAN THE BARBARIAN!

TwistNHook:  Any thoughts on where Hagan's career will take him?

Kodiak:  He'll probably get invited to camp somewhere.  But, he'll have to get really lucky in order to stick.  I'm afraid he's most likely to continue his career outside of professional football.  I wish him and his little girl the best.