Remember when JJ Arrington compiled up 2018 yards behind one of the best offensive lines in the country? Well, Shane Vereen picking up 1376 all-purpose yards last season felt almost as impressive, considering that the man was often working behind beef jerky rather than than the big slabs that once swallowed up opposing defenses. Imagine if Vereen had been given the bulk of the Furd to run behind, and there's your next 2000 yard season right there for Cal. Alas.

I'm not sure if that number is the biggest point in his favor for succeeding in the pros, or these ones are.

Number of times Vereen was caught smoking a cigarette pensively at Henry's: Zero.
Number of offensive linemen found in this montage: Zero.

Shane Vereen reminds me of a stronger, more built version of Justin Forsett. Both of them were outshone by their athletically talented counterparts. Both of them proved their worth when their tailback partners left for the pros. They both have the same sort of shiftiness that allows them to keep moving outside of tackles. And most importantly, both of them proved they could handle the majority of the carries without losing any of their offensive potency. Forsett's 305 carries in 2007 are the most by a running back in the Tedford era; Arrington's 289 carries are second, Vereen's 231 are third--and of the three, Vereen's offense was the unit that saw the ball the least.

Forsett is the closest thing to an everydown durable back in the pros that Ron Gould has produced. So why can't Vereen? 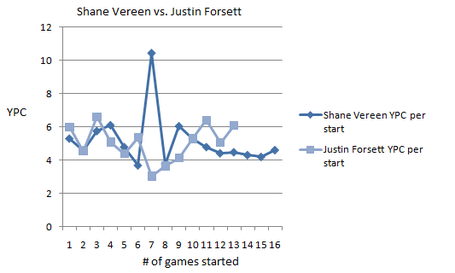 What matters most in the pros is consistency in the run department, and both these guys displayed it. Other than an aberration against UCLA, Forsett generally averaged between four to six yards per carry. Vereen only dipped under four yards per carry once after Best went down to injury, and as the season wore on he leveled off at a steady and reliable four yards-plus per carry.  Forsett was in an advantageous position too; he had one of the best receiving corps in the country to team up with offensively. Those last four games for Vereen came with Brock Mansion at quarterback and two of the five best teams in the country boxing up to stop Shane, making his production all the more impressive--his offense kept Cal in two games where the passing game could barely complete forward passes, and everyone knew the ball would end up in his hands on enough occasions.

There is some curious perception that Vereen is a fumble machine, which is far from true. He coughed up the ball five times and lost one (a costly one, but only one) in 2010; those aren't the greatest numbers, but they aren't terrible either. One of those fumbles came from the offensive line blowing things up on a 2nd and long and Vereen trying his best to cut back and make something out of a negative play. Another two came from leaning forward, placing his body a little bit forward and trying to pick up extra yardage, with a defender being in the right place to strip him--it's a bit of an error, but easily correctable. It should be noted Vereen was the first person back to the ball on half those fumbles.

Vereen is a compact runner. He can get low to the body without having to worry about losing it. He handles the ball extremely well and close to his body, and can shift it from the arm most prone to stripping to the other arm mid-run. Solid technique, and he's very good at striding forward with a one hand grip.

Likewise, his footwork is very strong. His feet are always running and moving, and its his biggest weapon to keeping . Having active feet is a great way to stay up and going in the NFL, because tacklers are not going to be missing you on too many occasions. Stopping and popping is not a practice that'll sustain itself. Vereen churns churns churns; you have to move with him to get to him, and disciplined enough not to overrun him to get to him.

Vereen also brings power. He can manage his way through the holes and change direction and speed quite ably to garner yards. Like Forsett, he is incredibly elusive to bring down if the blocking is adequate.  Taking him down is no easy task. I've seen about a hundred defenders try to go low and grab him by the legs, only to see him hop his way forward for an extra yard or two, or break out of it completely and curve his way around for an extra few yards or first downs/touchdowns. He doesn't have the greatest stiff-arm, but he's taken a few guys down and kept the feet churning.

In the open field, Vereen doesn't have the incredible stop and stutter move that Best has, but he has a more deceptive change of pace where he shifts inside before bouncing outside. Best would take that first step; Vereen will start shifting his weight as to indicate he'll cut toward the interior, then shift his weight back and work his way toward the sideline. It's far from flashy, but it can be very effective once Shane gets to the open field.

In terms of pass blocking, it's hard to say. Shane wasn't the type of guy who stepped up and blocked that much, but I'd say he improved modestly enough from a decent first year. The offensive line was so poor last season it was really hard for Vereen to block out the blitzer ... because he often spent his time having to pick up 280-300 pound D-linemen who the front five missed.

Pass catching though? Exceptional. Vereen played out of the slot and ran wheel routes to the corner of the end zone, as well as executing some curls. He was a solid enough swing pattern, although his quarterbacks struggled to throw those passes. He also adjusted to off-target throws on several occasions and made some great grabs. Vereen ran a lot of different routes last year, and should be able to catch up fairly quickly to the NFL acumen of pass patterns.

People who've been around these parts know that I really appreciate Shane. The dude arguably had the weakest group of talent around him in the Tedford era, and he STILL could be a worldbeater despite all the other deficiencies of his squad. It's hard adjusting from being on a great team to a good team to a mediocre team, and Vereen not only held his own, he kept his Bears afloat all year long. That sort of tough mindset will serve him well at the next level, and the team that grabs him will appreciate him for that.

I don't really know if a pro football team will have a dominant rush attack with Shane Vereen as their mainstay option. But will he produce in whatever role he's handed? I have no doubts.