In case you missed it, here is our awesome interview with Cameron Jordan. You've already seen a hundred different draft profiles on him (check out the official CGB draft profile). Today I break down one of his patented pass rush techniques, the swim move.

The swim move is one of the classic pass rush moves defensive linemen like to employ to get past their man without engaging in full body contact. Modern times have slightly downgraded its usage in the NFL, but in the college it's plenty effective, and Jordan might be able to make it work for him because of his athletic talents. The idea behind the swim is you place your outside arm on the back of the lineman that's defending you, then swim your inside arm over his shoulder to eventually get around him and to the quarterback. Less engagement and more quick power moves help to earn a defensive linemen a better shot at getting elusive sacks.

That's a painfully simple explanation, but after the jump, I'll detail it more after progressing step-by-step through one of Jordan's best plays of the season, his forced fumble of Nick Foles in the Arizona game.

Near the end of the first quarter, Arizona is facing a 3rd and long. Jordan is lined way outside in a five technique.

However, his job on the play is to shoot the gap and engage the guard, #70 Vaughn Dotsy on the play. 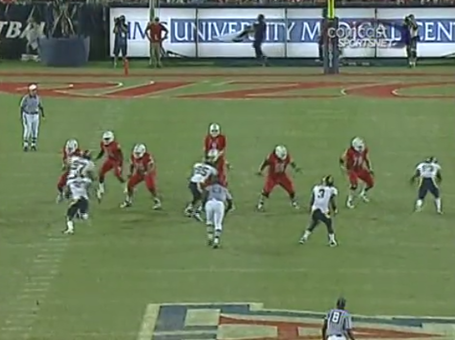 Jordan does a good job with his feet of keeping himself level with Dotsy as he gets ready to engage. 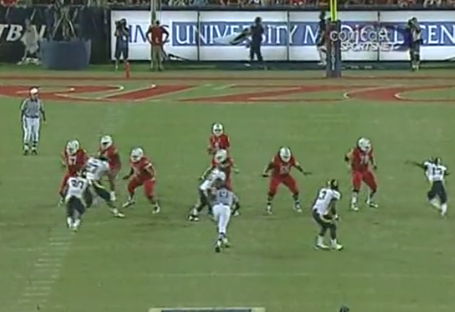 Jordan begins to stutter step toward the inside to try and feint the guard away from where Jordan wants to attack (Dotsy's outside shoulder). The stutter/hitch causes Jordan's hips to sink a little. The effect seems minimal, but take a look at the below photo and you'll see how important it is to get the swim move to work. 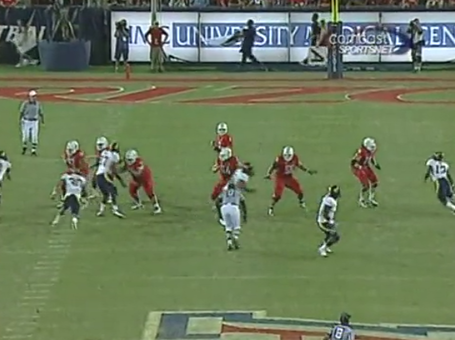 Now take a look at Dotsy's shoulders. They're also sinking closer to the ground along with Jordan's hips. The hitch dupes him into thinking Jordan is either going to bull rush or simply engage the tackler on the play. Dotsy has to go down to try and engage Jordan or risk not containing him at all and getting blown by with his speed. Again, he's too far away to really make sure he's got him locked down.

This subtle movement by Dotsy leaves him plenty prone to the swim move from Jordan. 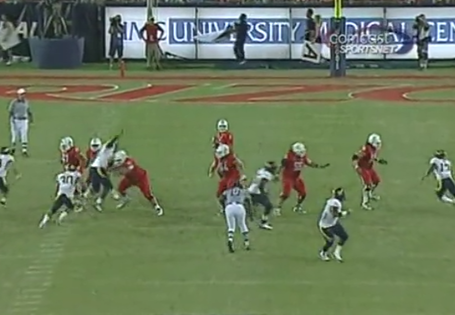 Once Dotsy goes low, Jordan anchors his left hand in an open palm on the side of Dotsy's right shoulder to pull it down and give himself more room with which to swing his arm. When Dotsy comes to push off, Jordan swings his other arm right over Dotsy and blows right by him. 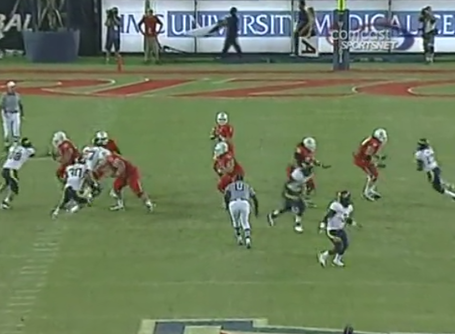 Dotsy is about 50 pounds up on Jordan, but he is totally out matched to counter Cam's athleticism and speed on this play. Jordan is able to get past him and has a clear path to the quarterback.

The most critical part of the swim move is that Jordan's inside foot is situated right behind Dotsy's outside foot, and thus doesn't have to worry about being slowed down by leg entanglements and keep on pressing toward the quarterback at full speed. 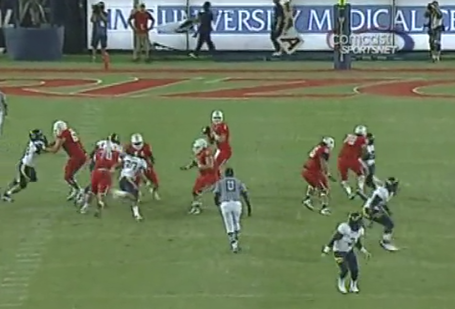 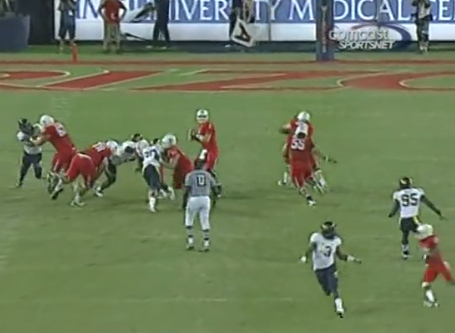 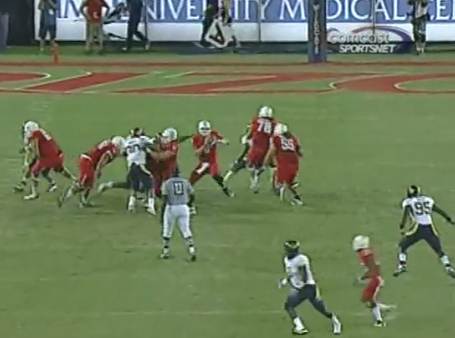 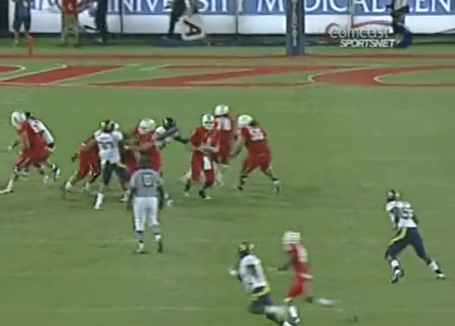 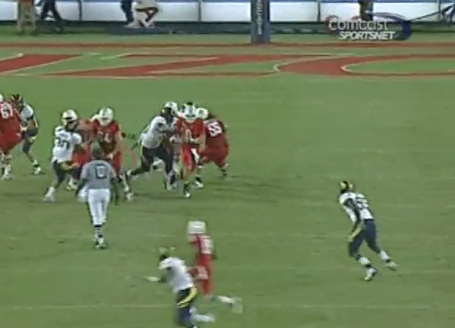 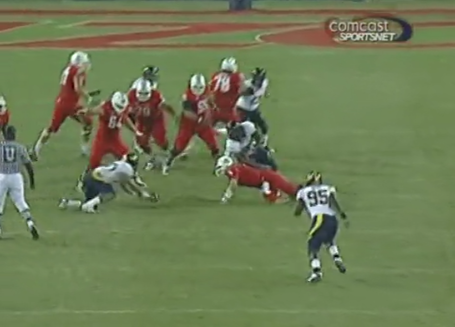 Eventually Jordan pursues Foles out of the pocket and forces the fumble along the way, again using those long arms to wrap up the quarterback's throwing arm and strip him of the football.

What makes the swim technique so effective for Jordan is his incredible wingspan. Usually it's not advised for a defensive linemen to swim his inside arm over the helmet of his man (it's preferred to swing it just over the shoulder, because otherwise the body contorts and its easier for the offensive lineman to recover from the initial move), but Jordan can motor that thing right over opposing helmets without missing a beat or losing too much of his balance. He'll lose some of his lateral quickness, but he can make up for it by his ability to reach out and grab and find the quarterback, like he did on the Foles forced fumble.

Again, the big question is whether he can pull off that move against pro linemen. I'm going to venture that if NFL coaches can find the right position and scheme for him to succeed in, he will be able to get pressure on the quarterback. It's worth noting that Jordan was most effective utilizing the move (with some other combinations that I'll hopefully cover later on) against slower guards rather than the more agile tackles. The swim move is not as commonly used as it was before because offensive tackles are too tall to move around, but if Jordan is deployed to rush against the slower, shorter guards like he was as a 3-4 defensive end? I could see success there with him shooting the gap with the swim move.

This is not Jordan's only type of move though, so don't be so quick to dismiss him if the swim move is defeated by pro linemen more often than not. Just because he doesn't get a lot of sacks doesn't imply he's incapable of getting none at all. I'm sure offensive linemen don't want to deal with Jordan's left arm hitting their back, glimpsing briefly at the right arm, then catching up from behind as he hunts their quarterback. Ignore his abilities at your own peril.