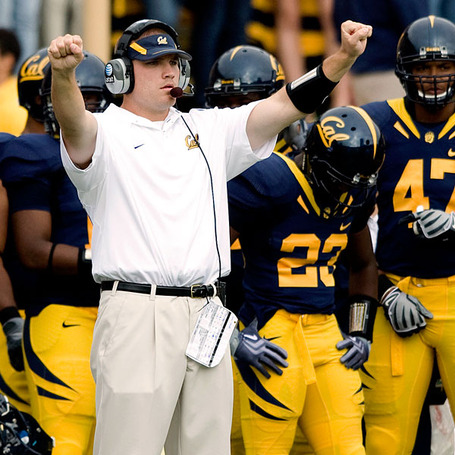 My list is in no way comprehensive. Coaches should be hitting the recruiting trail following the conclusion of spring practice. Feel free to discuss other prominent recruits in the comments section.

Byron did not attend Cal's Valley Christian open practice. He was visiting Cameron, his brother, at ASU [2]. Byron is one of the more important recruits since Cal will most likely only take 1 or 2 RBs in the 2012 class. His strength, vision, and track speed will be a tremendous asset.

Armstead is the consensus 5 star recruit in the 2012 class. He can be an outstanding OT or DT w/ his size & athleticism. Arik's preference is to play defense if I recall correctly. I've seen Arik at a couple of home games. He always seemed to enjoy his unofficial visits to Berkeley. Armond, Arik's brother, does play for USC though. The Trojans are formidable in the recruiting game. If Arik eventually decides to come to Cal it'd be a coup for NorCal football.

JCF is a physical specimen. He and Arik have been friends from football & basketball. Cal is in good position to land one of the more coveted TEs from the West Coast.

A former teammate of Brendon Bigelow, Shepard verbally committed to the Irish w/o visiting. Tee came to visit Berkeley unofficially last year and during the Elite Junior Day. National Signing Day is still months away. Brendon and the coaches have plenty of time to convince his former teammate and Army All-American to change his mind.

One of the fast rising recruits on the national scene, Shittu received his Cal scholarship offer when he visited Berkeley unofficially. Tiny Moala could be getting some new friends in the future.  Aziz's strength & quick feet will allow him to get into the backfield to pressure QBs and stop RBs.

A big target for his QBs, Payton looks to have an extra gear that creates separation. Jordan came to Cal's Elite Junior Day and there's a chance that Cal can sway him away from the Trojans.

Kyle possesses exceptional strength to bury opposing linemen and pave the way for his RB. He has been busy this spring visiting USC, Stanford, Oregon, and Cal. Coach M can shore up one of the best OT classes in recent memory by focusing on the Cali recruits.

"The first thing that stood out to me about Simmons was his skinny ankles,'' said Tom Luginbill, ESPN.com's national director of scouting. "He is nimble-footed and very athletic, given his size. But he is not a tackle, strictly a guard. For a 300-pounder, he moves around nicely and showed a bit of a competitive streak as well [3].''

Ellis is runner-up to Aziz Shittu for defensive linemen MVP honors at NFTC USC. He looks to have speed and skills to play DT or DE to help Coach P pressure QBs.

Taylor & JCF make up the one-two punch for West Coast TEs in 2012. He visited Berkeley unofficially a couple of weekends ago [$4] and had a great time. Cal is in a good position to land both JCF & McNamara. With Richard Rodgers Jr and Jacob Wark in the mix, the future at TE appears promising.

Cal seems to be in the mix w/ FSU, Florida, Miami, USC, and MD for the WR/S prospect who looks up to DJax. A mature route runner w/ speed to spare, Diggs could emerge as the second coming of KA21. The loss of Tevin Carter should open up plenty of opportunities for Stefon if and should he decide to play offense.

Josh is the son of former Husky Scott Garnett. He is a versatile athlete recruit who can grow into playing tackle at the college level. A fair number of Washington recruits leave the state. Deandre Coleman is now competing for a staring spot on the Golden Bears defensive line. W/ the current offensive line situation Josh will be a fine project for the future.

Russell is the lightning to Byron Marshall's thunder. A RB who's adapt at turning the corner and murder defenses in open space, KeiVarae has talked about joining Byron at Cal as the future 1-2 punch. Hope the coaches will take a chance on both Byron & KeiVarae.

Banner received both football & basketball scholarship offers from Cal. Coach Tedford & Monty are flexible enough to let him try both sports. We could be looking at some football/basketball crossovers in the future w/ Zach & Richard Rodgers.