[We are looking back at some of the contributions of players leaving the Cal football team.  We've looked at Cameron Jordan, Kevin Riley, Mike Mohamed, and now Shane Vereen]

TwistNHook:  Shane Vereen might be the most interesting runner of the Tedford era.  He always had Jahvid Best ahead of him, but in the tail end of 2009 and 2010 managed to show why there was no real drop off from Best to Vereen.

Watching the game in person, you didn't really have an opportunity to reflect on how amazing a day Vereen had.  He took the ball every which way, including multiple Wildcat options.  He scored 3 TDs and willed Cal to victory that day.

What are your memories of Shane Vereen? 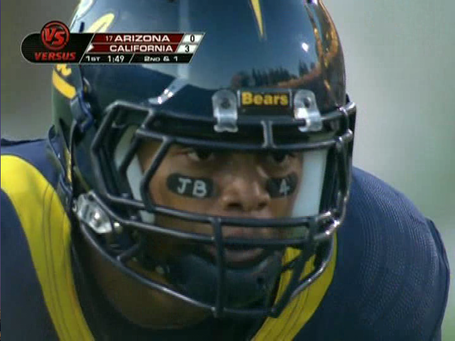 Shane's coming out party was actually one week before, Senior Day against Arizona: 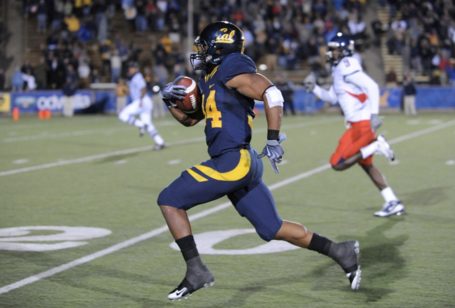 Afterwards, Riley & Vereen shared a nice moment huggin' it out as King Tyce watched on: 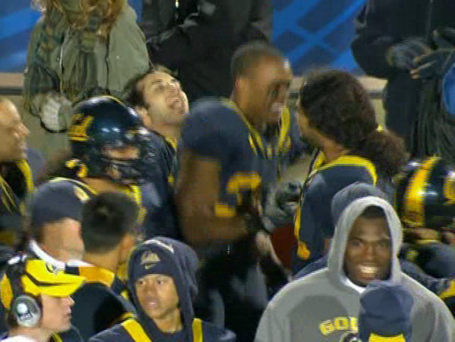 That's the way I'll remember Shane Vereen, a friend, a warrior, and a closer.

Berkelium97:  My fondest memory of Shane Vereen will always be the legendary 2009 Big Game.  But my first memory of him was the Michigan State game in '08.  I was quite excited to see him play in his first game--particularly since he played high school a couple miles from where I grew up.  In fact he was one of the highest recruited players ever to come out of Valencia High School, so I was really looking forward to seeing him hit the field.  Anyway, back to 2008.  Throughout the second half of the game, it seemed like Cal was never quite able to put the game away.  With just under 5 minutes to go, Michigan State once again made it a one-possession game.  Best returned the kickoff, so Vereen was the RB sent out for Cal's play on offense.  I remember thinking that all we had to do was burn the clock.  A five-minute drive would seal the game and certainly seemed possible.  Vereen, of course, had other plans.  He didn't burn the clock.  Instead, he burned the entire Michigan State defense with an 81-yard run that sealed the victory.  It was clear after that day that we had a lightning and lightning combination at running back--two guys who were capable of breaking free on any given run.

Four weeks later Vereen gave us a first glimpse of his incredible durability--a trait we often felt was lacking in Best.  Against ASU Vereen ran the ball 27 times and caught 5 passes.  In his entire career at Cal Best never topped 27 carries.  Vereen did it in his first start and kept the offense chugging along.  Vereen was an excellent complement to Best because he could take a pounding and still churn out yards.  The Best-Vereen tandem might have been the best of the Tedford era, thanks to the unique combination of skills they had.

HydroTech:  My earliest memories of Shane Vereen always seemed to be: this guy is slow!  But I think that thought was usually only occurring because I was used to seeing Jahvid Best zip across the field like lightning.  Shane certainly wasn't slow, but what he lacked in speed he made up with his tenacity and determination to move piles.

Also, another Shane Vereen memory I will always treasure is watching Shane try to throw footballs but being pretty bad at it.  I think Shane was like 0/2 in his career, right?
Berkelium97:  That's right, he never completed a pass (he was 0/3 in his career).  That wobbling duck of a pass he threw out of the wildcat against ASU in 2009 took five years off my life.  Burfict was thisclose to intercepting it and ending the game.

OhioBear:  Wow, I can't really say it any better than these guys have.  I, too, will remember Shane Vereen for his tireless durability.  The 2009 Big Game will live in Big Game lore as one of the grittiest, greatest performances in the rivalry's history.  42 carries?  For 193 yards?  Are you kidding me?  And then we found out later that he did it all on a torn (?) meniscus.  Incredible.

Then there are the big plays.  The aforementioned daggers against Michigan State and Arizona are obviously part of any dossier of Vereen's career.  But there are also the "I can't believe he just did that" plays that he made.  Like the big gainer around the left side that he ran against Stanfurd out of the Wildbear formation in the 2009 Big Game.  Or the 1st quarter TD run off an option look at Ucla in 2009, when it just seemed like a couple of Bruins' defenders had an angle on him.  Or his hesitation-at-the-line, stop, and then run around right end touchdown against ASU in 2010.
Reliable.  Durable.  Dependable.  That's Shane Vereen.  He was a great running back for us and we should count ourselves lucky to have had a 1-2 punch of Best and Vereen when those two shared the tailback position.
On top of that, Shane graduated with one year of football eligibility remaining.  What's not to like about Shane Vereen?

Kodiak:  I was impressed by Shane's vision and always fall-forward style.  I think Avinash has pointed this out before in previous discussions, but Shane's running style really embodied the best of Coach Ron Gould's instruction with a blend of balance, patience, and pad level.  The heart was all him, however.  From a stats perspective, he had the misfortune of splitting carries with a superstar and then playing within a couple of the more inconsistent offenses of the Tedford era.  Some pro team is going to get a steal - I think that he has the potential to be one of those backs whose pro-career far exceeds his college numbers.

Solarise:  Shane Vereen off the field is just as impressive as his accomplishments on the field.  He spent a summer interning at CSN Bay Area and earned lauded praise for his maturity and work ethic:

More than a star player on the field, Shane Vereen was the epitome of a Cal student athlete.
OhioBear:  Good point by Kodiak.  Vereen -- and you could say the same about Best -- had the target on his back because we lacked a truly consistent passing game during his time as the No. 1 running back.  Also, Vereen -- and you could say the same about Best in 2009 -- had to run behind an offensive line that was not the caliber of the lines that Echemandu, Arrington, Lynch, and Forsett had to work with.
One other thing about Vereen that I liked: he rarely fumbled.  I remember him losing a fumble in the 2008 Oregon game (the rainy day at Memorial).  I don't remember him losing a fumble again until the 2010 Oregon game.
TwistNHook:  Where do you see Shane Vereen's career going?
OhioBear:  To the NFL.  In today's NFL, teams love to have two quality running backs to carry the load, a guy with Shane's ability, competitiveness, and work ethic should have a place.  In the right situation, I could see him becoming like Ryan Grant became in Green Bay.

LeonPowe:  Regardless if Shane makes an impact or not in the NFL, through his character and intelligence, he will no doubt be a success in whatever he does. (I can see him being an excellent 3rd down back for an NFL team - with his speed, hands and vision) - I don't know if he's got the size to be an every down back, he doesn't seem as solid as J-Force, but he has the talent to contribute at a high level in the NFL though. Assuming the lockout ends.

HydroTech:  I see Vereen getting drafted between the 3rd and 4th rounds of this year's draft.  I think he's going to be a solid contributor for whichever NFL team drafts him.  I'm not sold that Vereen can be a #1 RB in the NFL, but I think can definitely be a great #2.