Share All sharing options for: Cal-USC Football 2010 Game Review: The Inside Zone Run

(We continue our look back at USC 48, Cal 14. Painful, yes, but it gets better the third or fourth time you watch this catastrophe. Any of you ever watched Manos Hands of Fate? By the third viewing, you're totally dead inside. This is what this Cal-USC game is like to me now. There are no feelings left, just process and synthesize.)

In our first post on the subject of the USC run attack vs. the Cal run defense, we took a look at outside zone running and how the Trojans were able to utilize cutback lanes to gain steady yardage early on in the contest. USC's offensive linemen were very good at winning one-on-one battles, which opened up plenty of opportunities for Cal down the field.

Now we turn to a real killer for USC in the rush attack, particularly the Inside Zone. What went wrong? What happened?

After the jump, more on the inside zone run that the Trojans deployed, plus one such examples of how USC beat us at the point of attack. 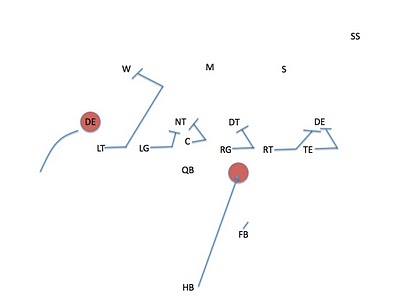 (image courtesy of rufio of Dawgs by Nature)

When a defense has success with the outside zone run, the other predominant running scheme they employ is the inside zone. The technique is similar to the outside zone; blockers take a lateral step in the direction the ball carrier will be running to once he gets the ball. However, instead of working more to the outside to try and seal defenders away from the running lanes, they tend to just straight up drive forward to pave the way for inside running lanes.The inside zone is effective because it can be disguised early in the play as an OZ run, fooling defenders and running them out of position.

(One other cue to distinguish which zone play is being run is where the running back takes his initial steps. If his trajectory is more to the outside, think outside zone run; if he aims inside in his first few steps, think inside zone.)

With the Bears thinking between the tackles in a short yardage situation, seems like the perfect time to try hitting the outside. 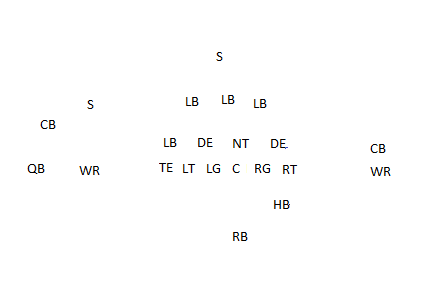 USC pulls out the Wildcat, something they did a little bit more of last year (Trojan Football Analysis did a good job breaking down all their Wildcat runs in 2010). Here they work inside zone to perfection and use an excellent cutback lane to pick up big yardage on the play. 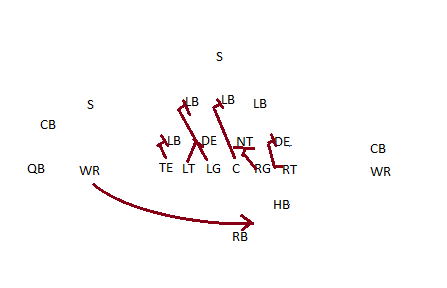 RG Khaled Holmes and C Kristofer O'Dowd initially double-team Derrick Hill, but this time O'Dowd moves to the second level to take out one of the ILBs.  In addition, in comparison to the last running play, this time there's a TE in to handle Mychal Kendricks, and the LT puts Ernest Owusu down on his knees. The center O'Dowd blocks D.J. Holt, while the left guard Lewis takes Mike Mohamed.  Tyron Smith takes Cameron Jordan one-on-one and Stanley Havili comes in with some extra blocking.

This is a great double-team by Havili and Smith. First Smith gets the initial job done by standing up Cameron Jordan, but Jordan gets his right arm somewhere on Smith's pads and is able to turn himself to the outside of Smith. Smith does keep his right arm locked on Jordan's left waist, but Jordan seems ready to break free until Havili unleashes a perfect pin block that traps Jordan between the two Trojans. Tyler now has the seal to break outside. 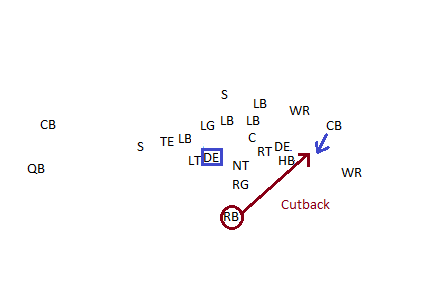 However, again, just like on the first running play of the game (from our first post), the nose tackle disrupts the inside running lanes. Hill tries to straight bull rush toward the running back by going through the guard. O'Dowd gives him a little shove from the side, but this is mostly Holmes doing the work. First, he attacks him from one side and tangles his hands to ensure the nose tackle doesn't lumber into the backfield. Hill drops his arm, and Holmes is able to put his left palm on Hill's numbers and his right arm on Hill's left back area. Hill no longer has any place to leverage himself on the play, and gets thrown to the ground.

So Tyler is forced to hit the cutback lane on the backside. How does that go for him? Check out the video below.

As you can probably guess, the mistake here is on Marc Anthony, who had originally good job not biting on the sweep from Woods and tries to contain the running backs. Unfortunately, he ends up botching the outside contain, as Tyler only needed to bounce to the outside to get to the sideline. As a cornerback, you should never ever let a running back get to your outside and hit the sidelines.

As the only freed linebacker on the play, Browner probably should have been tilting more outside once he read the seal instead of focusing inside, but this is mostly on #2 for shifting his feet too far inside and trying to make the stuff rather than forcing him back to the help linebacker. Sometimes you have to concede the first down and work to fight the next battle rather than venturing forward in search of new worlds, only to end up adrift in space.

The little juke and bounce by Tyler, the backline support of Josh Hill running up to the LoS and taking himself out of the play, and the excellent blocking by the Trojans (including downfield by the receivers) results in the first of many huge gains for USC. Mistakes like this in the secondary were commonplace that Saturday, and are part of the reason Al Simmons is now at UTEP.

USC only used the Wildcat three times against Cal, but all three times the Trojans picked up HUGE yards (25, 8 and 11 yard gains). Fun times.