OPINION: Cal Really Needs To Sell Out To The Man More

Share All sharing options for: OPINION: Cal Really Needs To Sell Out To The Man More

This is not going to be a popular post, I do not think.  And I think some people will believe I am just joking around.  However, I serious with this.

It is happening all over.  Now, athletics departments have to look at themselves like self-sustaining, almost private businesses.  The problem is that as a business, athletics departments in general have a terrible business model.  Just terrible.  Pretty much all but two of their products lose money.  And a lot of it!  What business could run under similar circumstances?  When you have to make enough money from two of your products to offset the other 26 or so, the odds are always against you.

We know that here at Cal, things are perilous.  Teams, like baseball, looked like they were going to be cut.  Now, it appears they are reinstated thanks to private donations.  That is great news!  Bully for everybody!  We can't just sit around and hope that the private donations keep rolling in.  Otherwise, we could find ourselves right back in the same boat.  Further, men's gymnastics' future is still in doubt.

That's why I think it is high time that Cal sold out to the man as much as humanly possible.  I know it is distasteful,  I get that.  It is gauche.  But it should be done.  It is time for the term "non-revenue" sport to become an extinct one.  They might never be able to make a lot of money or even money at all.  However, perhaps they can minimize their losses enough that the pressure on private donations or revenue sports is lessened.  That, in and of itself, is a strong value.  Lambast me all you want, but unfortunately, the time for dignity is over and the time for making as much money as possible to avoid disaster is upon us.  It doesn't bring me great joy to write this, but it is what it is.  Join me after the jump to take a closer look at this situation.

A recent BearTerritory article on the reinstatement of baseball noted that plans are in the works to start selling out:

But the journey is far from over, despite Chancellor Robert Birgeneau's announcement that the program will represent the campus as an Intercollegiate Athletics sport, now and into the future. There is still plenty of work to be done to turn the program into a revenue-generating enterprise.

"One thing we're trying to do is to work out an arrangement for us to be able to have advertising on our outfield fences, because a lot of colleges throughout the country have major advertising on their fences just like they do in the pros," Gordon said. "Ours are bare. There's a lot of room there for advertising, and Larry Baer of the Giants and others have been very helpful in lining up some advertisers for us if we get the approval from the University to be able to do that.

This is a perfect idea and one that I've discussed idly with friends over the years.  The Cal baseball experience is almost too good to be true.  Tickets are ridiculously inexpensive.  You can sit mere feet from home plate.  A truly idyllic setting.  It harkens back to an earlier time before you could barely afford a Giants ticket or even a bottle of water at an A's game.

That is all well and good, but Cal is leaving a lot of money on the table here.  They first need to increase interest in the baseball team by greater marketing.  Ads for the team on radio or TV.  Hopefully, the new Pac-12 media deal will get some of the games on TV.  Then, once you've increased interest, raise ticket prices.  They are now $8.00.  I bet you could double that number and still see a similar turn out.  It is much cheaper than other professional options in the Bay.

Then, once you've raised interest, slather the place with advertisements.  Have the announcers read out advertisements in between innings.  They hand out roster cards for free when people come in.  Put ads on those roster sheets!  I know you are thinking "This is terrible!  Commercialization!"  But they don't have to be ads from Chevron, Goldman Sachs, and Xe.  I am sure there are a lot of local Berkeley or Bay Area business that would be interested in advertising with Cal sports.  Berkeley helping Berkeley!

This won't be enough probably to immediately put baseball, for example, into the black.  However, it's a start.  It is better than the status quo.  And it will help work with private donations and revenue from other sources to alleviate the current disastrous budget situation.  Those are just some ideas for raising revenue for the baseball team.  I am sure there are many others. 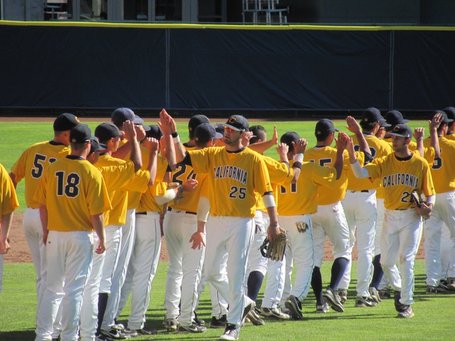 Cal demanded that Save Cal Baseball raise $10 million, because that would mean about 7-10 years worth of money for the future.  So, it looks like it costs about $1 million or more a year to fund the Cal baseball team.  Are we going to get $1 million a year from these advertisements and ticket sales?  Probably not.  At least, not initially.  But 7-10 years from now, we might be in the same situation, hoping against hope that MLB players, Cal baseball alums, and other interested fans will shell out more money.  Maybe they will.  Maybe they won't.  The earlier we start building a stable financial base for Cal baseball, the less Cal will need to demand from Save Cal Baseball and other organizations.

This kind of concept can be repeated for other Cal sporting teams.  Soccer is an increasingly popular sport in America.  The Cal men's team last season did amazingly well.  5 of the members of the team were drafted onto Major League Soccer teams.  That seems good to me!  So, get some marketing out there.  It'll cost some money, yes, but sometimes you have to spend money to make money.  If we can raise further interest in more of the sports, we can charge some amounts or greater amounts of money for tickets.  We can charge money for advertisers, either visual or aural.  We have so many amazing sports teams at Cal.  Teams winning national championships.  Teams with Olympic champions!  We are not taking advantage of the opportunities to sufficiently monetize these sporting events.  Like I said, it probably won't make these sports entirely self-sufficient, but it will at least make the Cal athletics budget situation improved going forward.

Further, this might relax some of the pressure on football and men's basketball.  There is a lot of pressure on these two sports, football especially, to make as much money as possible.  So, ticket prices go up and they slather that place with advertisings.  Now, the marching band can barely get a song in edgewise in between Odwalla Races on the BearVision. GO PURPLE!  Maybe if we can make more money from the so-called non-revenue sports, then we will be able to get more time for the Cal band to play at football games.

I know this whole post doesn't taste good.  I understand.  There is already a huge throng of people feeling ever more uncomfortable about the professionalization of football and men's basketball.  It seems antithetical to the very nature of collegiate sports.  We have to move past that.  We live in interesting times, my friends.  We just stared down an abyss into which none of us would ever want to travel.  Let's do what we can to avoid that again.  If we don't, there might not even be sports to enjoy.  That might seem extreme, but I think the facts of the last few months are obvious on their face.  Now, having heard my rant, tell me why I'm wrong in the comments.  GO BEARS!