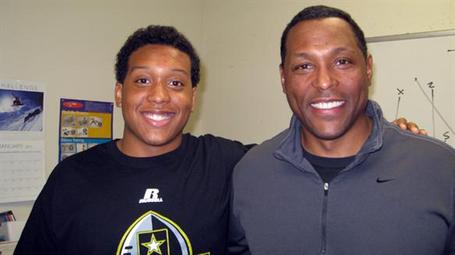 Notes: Hardy Nickerson Jr is a speedy linebacker prospect from Bay Area's very own Bishop O'Dowd. His father Hardy Sr should require no introduction to Cal fans (video link - where did the nickname the Dragon come from?). Similar to other aforementioned Golden Recruits, Hardy Jr. earned Cal-Hi Sports/ESPN RISE's 1st-Team CA All-State Underclassmen selection  [1]. The emphasis on academics is strong in the Nickerson household as Hardy Jr made Bishop O'Dowd's All-Academic Team.

Ben Enos, Reporter of Contra Costa Times, once again answered CGB's questions regarding Hardy Jr. If you haven't done so, make sure you follow Ben @ East Bay Prep Corner and Twitter if you want to learn more about Hardy Jr and the East Bay high school sports scene.

Coach Kenwick Thompson recently spoke at a Southern California event regarding recruiting players that fit Cal's brand & character.  What do you think about Hardy Jr's fit?

Ben: I saw Hardy Jr. play as a sophomore, and when we worked on a season preview before his junior season, I talked with Hardy Sr. about leadership and his son was one of the ones he talked about as leaders on his Bishop O'Dowd team. Given the background Hardy Sr. has, it's not hard to imagine his son as a natural leader on the field and that would fit at any school.

What are Hardy Jr's strengths as a player on the football field?

Ben: Quickness. Leadership. Ability to be in the right place at the right time, which speaks to a high football IQ. With the coaching he's had, you're getting a pretty polished player right off the bat.

What do you think Hardy Jr will need to improve upon to succeed at the next level?

Ben: His is a common answer for high school players looking to make the jump to the next level. He just needs to keep getting bigger and stronger. I think from a technical standpoint he'll still continue to get better and better and I think he just needs to do what any high school player would, that being getting into a college program and adapting to the speed of the game.

Looks like Hardy Jr attended a 7on7 Tournament at Berkeley recently.  Are you aware of other unofficial Hardy Jr has taken to Cal or his impression of the school?

Ben: I couldn't tell you if he's taken any visits. With Hardy Sr. being a Cal grad, I'm sure there's no lack of information on the school in that house. They'll go through the process like any other family and make the decision that's best for them.

Looks like the Dragons had a somewhat mediocre season last year.  What is your outlook for the Bishop O'Dowd this season?

Ben: They're only going to get better. Last year, they had to transition into a new coaching staff after losing one of the East Bay's winningest coaches, Paul Perenon. That takes time, especially when you also have a new offensive system and a new quarterback. I expect the Dragons to do very well next season.

There's some talk regarding Hardy Jr that he might be better suited for the safety position in college.  What is your opinion on Hardy Jr play safety vs. linebacker?

Ben: That's always something you hear discussed if a linebacker is perceived to be a little undersized. I think this is again a situation where you're recruiting a football player rather than a position. With a guy like Hardy Jr, you focus on the skills he brings to the table and then determine where he fits once he gets on campus. He's a smart player, and that makes a switch like that easier.

How solid is Hardy Jr? Is he versatile, or does he have a particular skill that he showcases the most?

Ben: Probably just the fact that he flies around the field and always was at the right spot at the right time.  Keep in mind that I saw him as a sophomore and he was going to get better as a junior and a senior.

How does Hardy Jr. feel about the his family legacy.  Does he feel any pressure?

Ben: I'm sure he knows about it, but as with any kid being coached by his dad, I'm sure he'll do just fine building his own reputation over time. That kind of coaching can only help.

How does Hardy Jr.'s skill set compare to his father?

Ben: I actually didn't see a ton of Hardy Sr.'s career, so I couldn't really say.

Thank you Ben for taking the time to answer CGB's questions. Dunno about y'all but I'd certainly like to see the Nickersons in the fall at Memorial Stadium on Saturdays. If you want to keep up w/ Hardy Jr and Dragons football this fall, don't forget to follow Ben @ East Bay Prep Corner and Twitter.