Share All sharing options for: Cal-USC Football 2010 Game Review: The Outside Zone Run

I continue the review of the Cal-USC debacle looking at particular elements of this game, first focusing on the run game.

Normally, Cal's run defense has been stout to the task at limiting the Trojan rush attack to modest levels.  That was not the case this past season.  The Trojans rushed for around 170 yards in 2009, but it took them 44 carries to get to that total. In 2010, USC rushed for 124 yards in the first half alone on 15 carries for over eight yards a carry. There were multiple 10+ yard runs that went for first downs on multiple drives.

So what happened? Let's start by focusing on the Trojan playbook and how Cal struggled to counter plays we've seen for years, starting with one of their staples, the outside zone run.

The Trojans used it on several occasions in different variations in their first half demolition of Cal. A better description of the play, plus two such examples of the play, follow after the jump. 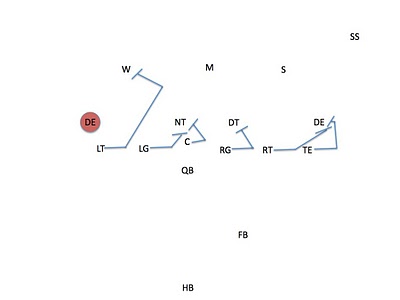 The outside zone run is USC's bread and butter running play. For those not familiar with the outside zone run, it's when offensive linemen flow in one direction to give the running back holes on the outside to attack. If the offensive linemen have defensive linemen situated in their proximity, they block them. If they're unblocked on the play, they help out their linemen with double teams before moving to the second level and taking out linebackers.They then try to place their bodies between the man they're blocking and the sideline to give the tailback and outside crease to attack  to get to open spaces.

If all the defenders crash to the playside, a cutback lane should open to the backside (opposite of where the play is going) and the running back should be able to get a nice gain up the field. Multiple options, multiple opportunities.

(Notice a defensive end is left unblocked here--usually one outside defender is left alone on the play and is either blocked out by the H-Back or is forced to read the play. He will have to watch for play action or a bootleg with the quarterback rolling out, or the H-Back leaking out of the pocket. If it works, this will open up a larger cutback lane for the ball carrier.)

Thanks to the excellence of their offensive lines and their ability to handle most Pac-10 defenders at bay, it has become a deadly element of their game.

First play of the game for the USC offense

Cal defends this one fairly well. 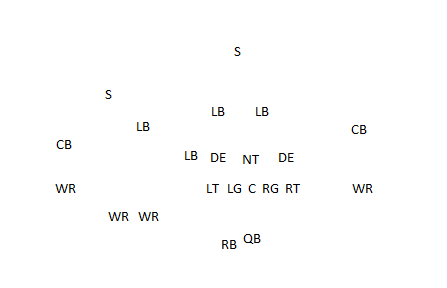 USC: Wildcat originally with trips left, Matt Barkley comes back to the LoS in shotgun.
Cal: 3-4. Mike Mohamed is out guarding the inside receiver on the left. Chris Conte is guarding the middle man, Darian Hagan the outside guy. 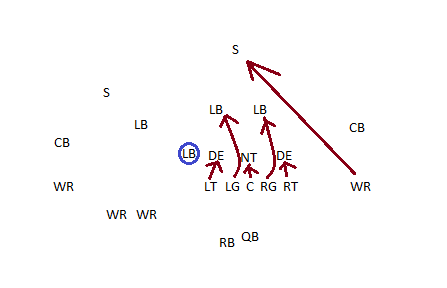 The design of this play is outside zone the entire way (although those arrows are not indicative of the amount of lateral movement the linemen make, they're flowing and trying to seal), even though the quarterback is usually under center. Here Barkley simulates the handoff and takes off running in one direction to try and feint out the unblocked linebacker (circled above) on the weakside, Mychal Kendricks. USC puts the left tackle Matt Kalil on weakside defensive end Ernest Owusu, has the center Kristofer O'Dowd placed on Derrick Hill and right tackle Tyron Smith engaging with strongside defensive end Cameron Jordan. The guards Butch Lewis and Khaled Holmes leak to the second level to take on D.J. Holt and Keith Browner. 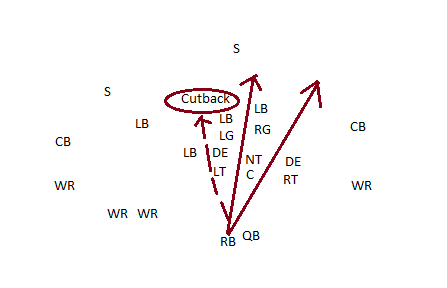 The strength with this type of run is that it creates multiple holes for a tailback to attack and exploit (as opposed to the power run game, where teams design one gaping hole for a running back to try and move through), meaning that a good runner between the tackles should be able to cause all sorts of issues for the Trojans. You see a cutback lane appearing here. 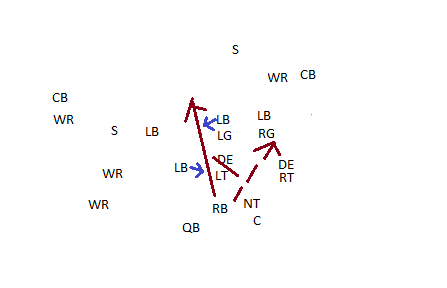 However, the ideal situation isn't what plays out on this situation. It all starts with the Cal nose tackle on this play Derrick Hill. Hill is able to straight up man-beast O'Dowd into the backfield. This limits the opportunities for Bradford, as he now has only one real lane inside, which would probably end up with him being swallowed into the trash. He is forced toward a cutback lane, which in this case is a straight run up the middle.

Thankfully for the Trojans, Kalil has pushed Owusu off-balance enough that Bradford has a big enough lane for him to burst through for some gain on the play. The unblocked Kendricks trips him up before he gets tackled by Holt and Browner for a three yard gain.

Here's a replay of the run (at 50% speed) to allow you to digest the play better.

Credit Kendricks for doing a great job on the edge, reading the play and ensuring he is equally between quarterback and running back when he goes to make the tackle.

So what does an ideal outside zone run look like? Well, let's take a look at what a running back can do when he gets good running lanes to attack. 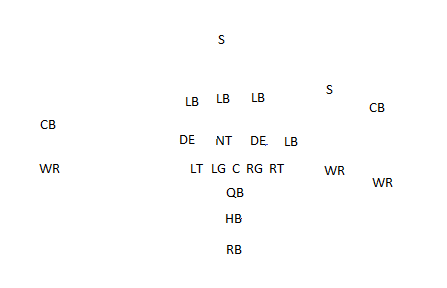 A more successful attempt at an outside zone run play, and all that's needed is one distinct difference in personnel--nose tackle. Payne is in for Hill at the line of scrimmage, and he gets taken out of the play. 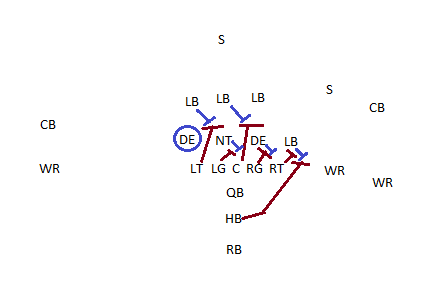 You'll see that the play is flowing to the right, as defenders get entangled in blocks. Stanley Havili comes in and helps Tyron Smith to pin Mychal Kendricks on the edge, and Khaled Holmes and Cameron Jordan tango just long enough to prevent him from blasting the play up.

The backside of the play is the key here, as the O-linemen execute their jobs perfectly. They leave Ernest Owusu (circled in blue) unblocked, then move to take out other defenders. The squares indicate two successful cutblocks by the LT Kalil on Browner, and the LG Lewis on Payne, pretty much taking them out of the play. The squares below indicate players that are on the ground when Bradford gets ready to hit the inside or cut back to the outside. 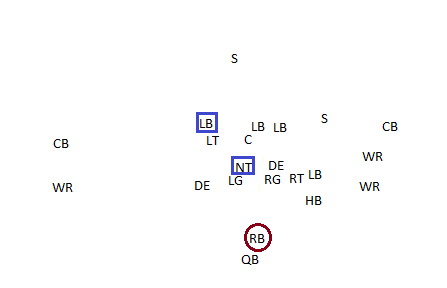 This play is a bust for the Cal defense the moment Payne hits the turf. The nose tackle must be able to hold their blocks, but most importantly occupy space and prevent the USC offense from getting clear lanes. When Payne hits the ground, USC now has a gigantic inside hole on the backside to exploit. There's your cutback lane, which is wide and gaping with the two backside defenders now on the ground. 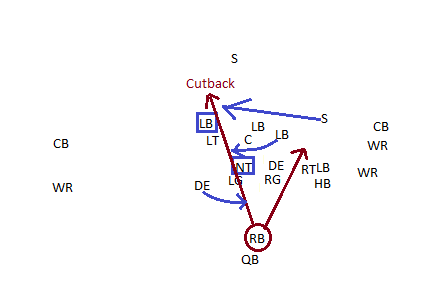 Owusu (who is watching for the bootleg) isn't able to make up all that space and pursue from the backside, so only Payne making some contact while on the ground with Bradford and a good adjustment by Mike Mohamed (who was flowing with the play) coming back from the inside prevent a first down.

Still, it's a successful play. Six yards might not seem like much, but the difference between a 3rd and short and a 3rd and middle is so crucial in college football, and runs like these helped set up ideal 3rd down situations for Matt Barkley and the Trojan offense all of the first half.

Check out the play from the sideline camera and particularly the end zone camera replay, again at 50% speed. You'll probably see the crucial error Payne makes that takes him out of the play.

You can see that the defense moves to the playside. But Payne doesn't engage his blocker, the left guard Butch Lewis. Instead he turns his shoulder, tries to shoot the gap and go straight for the running back rather than trying to fight off the block. You can see both Cameron Jordan and Mychal Kendricks both doing their job on the playside, forming that wall, keeping themselves straight up and trying to force Bradford into a tight running lane on the outside. By going straight for the ball carrier, Payne allows Lewis to cut block him, taking him out of the play and opening up that wide cutback lane. Kudos to Mohamed for keeping this play from becoming a disaster.

This is a recurring theme in this game: Players aren't able to win their one-on-one assignments, or make mental mistakes (or schematic mistakes, depending on what the DC tells them to do on the play), and at some points get straight beat and big openings for the offense. This leads to steady gains like the one above.

Unfortunately, this is only the tip of the iceberg in terms of good offensive plays for the Men of Troy, and far from the worst of the run attack that USC would flash in this one. More on this in future posts.

(HT to HydroTech from additional insight, and from keeping me from confusing inside with outside zone again.)