I can't imagine a more perfect setting for a Cal spring practice.  It was a beautiful, sunny day in the low 60s with an occasional, cool breeze.  A sizable crowd of knowledgeable Cal fans was on hand, plus a cavalcade of recognizable figures from the past and (hopefully) the future.  And the entire day took place on a backdrop of blue and gold.  I hope somebody associated with the remodeling of Memorial Stadium was on hand, because I think we should incorporate Grant's bleacher styling.  Blue benches and gold steps?  Sign me up!  Pacers 4 life!

Practice of course began with the usual position drills.  I happened to have a front row seat watching Coach Gould instruct Cal's stable of running backs.  It's always interesting to watch someone working when you know they're the best at what they do: 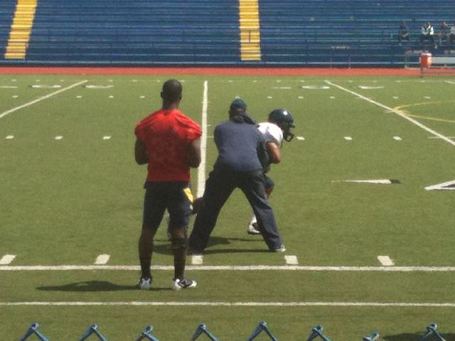 Ron Gould, pictured with unnamed back set to run for 1,000 yards at some point over the next 1-4 years.

But to be honest, routine position drills don't thrill me, so I spent much of my time star watching.  Look!  It's Brendan Bigelow! 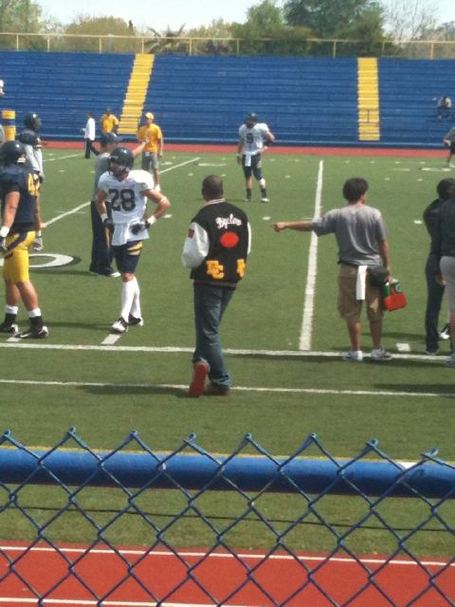 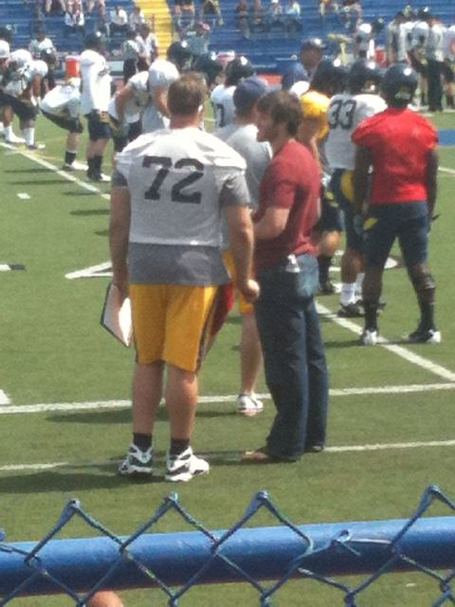 But enough of star-gazing - football is serious business!  And nothing is more serious than a spring scrimmage!  Now, at this point many practice reports have been written by a variety of knowledgeable and qualified writers.  So rather than break down the exact minutia of a very limited amount of data, I'm going to talk about the major storylines that have already developed and offer my take.  Will I buy or sell?

Storyline One:  Allan Bridgford was the big winner in the quarterback derby

Tenatively buying -I don't think it's inaccurate to say that Bridgford had the best day amongst QBs on Saturday - if nothing else, he was the only QB to not throw an interception.  But I'll admit that I'm worried Cal fans are already placing all of their hopes on him to resurrect Cal's struggling offense.  Bridgford threw three touchdowns and probably had the three or four best passes of the day.  I was particularly impressed with two throws.  One was a sideline throw while he rolled right under pressure that he put up high where only the receiver could get to the ball.  Theother throw was to a WR running a crossing pattern that hit the receiver in the hands just ahead of rather tight coverage.  The throws were there, he seemed confident in the pocket, and there were no truly head scratching decisions.

Having said that, I don't think Bridgford ever played against the first team defense (if he did, it was very briefly) that's been so fierce so far this spring, and that gives him a sizable advantage over his competitors.  I only recall a couple plays when Bridgford faced serious pressure, whereas Mansion and Maynard seemed to be constantly under siege.  That and the consideration that it was only 11 throws will stop me from prematurely calling anything.

After a pretty bad interception on an overthrown bubble screen while under pressure, Mansion stepped up and ran the offense pretty well.  He certainly looked much more poised than he did last year, and seemed to be going through his progressions pretty well.  He looked good on the move (lots of designed bootlegs) and was reasonably accurate in the process.  And I didn't even mention Zach Maynard, who admittedly had a very rough day.  But I'm not going to bury a guy with Division 1 starting experience because of two bad spring football series in a new offense.  This battle is far from decided.

Storyline Two:  Walk-on Mike Manuel has forced himself into the conversation at starting runningback

Tenatively selling - Cal fans just aren't sold on Isi Sofele.  After eight years of simply phenomenal production from the runningback position, Sofele hasn't seemed quite like all of those illustrious backs who constantly juked defenders, broke tackles, and ate up yards like crazy.  And so, when an unknown player comes out of nowhere with a few hot spring performances, it's not surprising that some would want to seize on it as the next big thing.

Now, I'm reasonably confident that Manuel will absolutely be a part of the tailback rotation in the fall - Cal has too many injuries and question marks for a solid performer to get stuck on the bench.  But at the same time, pre-season scrimmages can easily get overblown.  I remember watching Cal's spring scrimmage in 2009 and thinking 'Alex Lagemann is going to be awesome!'  Now, Lagemann certainly contributed that year, and was a perfectly solid 5th WR.  But he was arguably the star of the spring game, and on a team that was shallow at the receiver position I thought he'd end up starting.  If you would prefer an example from a different sport, think about how Bak Bak looked like a shooting star during the basketball team's open practice.

It's quite possible I'm underselling Manuel.  Despite being a walk-on he had a previous commitment to Cincinnati and it's possible that high school eligibility issues caused a truly talented player to fall through the cracks.  And goodness knows Tosh Lupoi (who found him) deserves the benefit of the doubt.  But a first year walk-on starting at running back would be unprecedented, and Tedford has already gone on record with a firm vote of confidence for Isi Sofele.

Storyline Three:  The defense is dominating the offense and will be excellent this year

Buying - Duh.  Part of the reason nobody was hyped about Isi on Saturday is because he got the same treatment that Shane Vereen got last year - constant defenders in the backfield.  The first team defense was fierce, and every unit got off some vicious, vicious hits that you wouldn't normally expect to see in a friendly scrimmage.  And the defense also forced four turnovers, a pretty good total for the equivalent of about one half of football.  The five sacks were all pretty legit - I think only once did the QB have a decent chance to throw the ball away.  And those sacks don't count all of the times the quarterbacks were flushed out of the pocket or went on designed rollouts.  Plays that ended with a Cal quarterback throwing the ball from the pocket under zero pressure were few and far between.

None of this is surprising.  It's normal for the defense to be ahead of the offense in the spring.  We already knew that Cal had a great defense last year, has been recruiting dynamite players on the defense the last two years, and has a complement of defensive players that are healthy, at least along the line.  That couldn't be said for the offensive line, which was missing at least Mitchell Schwartz . 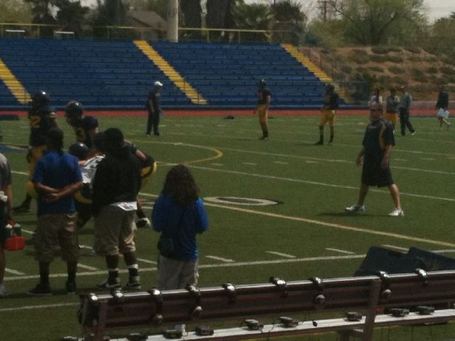 In Tosh We Trust!

-Anger and Tavecchio both looked solid.  I think Cal fans will appreciate having two senior specialists on special teams this year.  Of course, I've been out as a Giorgio apologist for a while now.

-WRs had an excellent day.  I don't recall any drops, and there were lots of good adjustments and catches on balls that weren't perfectly thrown.  Marvin Jones and Spencer Hagan in particular had good days (Spencer sustained a rib injury towards the end of practice.  Get well soon Spencer!)

-It's always fun to watch the halfback option play, but I hope the play we saw wasn't representative of Isi's throwing arm!

-Is it football season yet?