When we left off, SMC had played incredibly well in the first half.  They kept the pressure on our Golden Bears and pushed the Bears to the brink several times.  SMC did actually tie the game briefly at 15, but then Cal scored twice in the waning moments of the first half to push it to 27-15 at half.

With a short halftime concluded, we were off in Moraga! 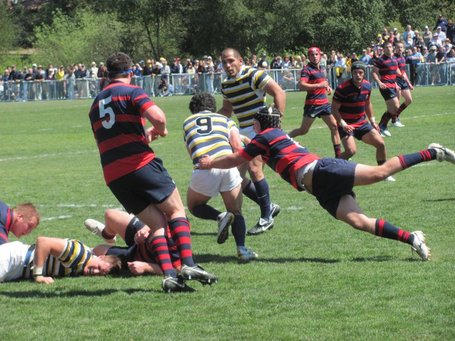 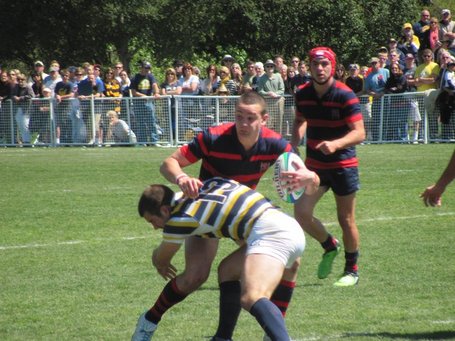 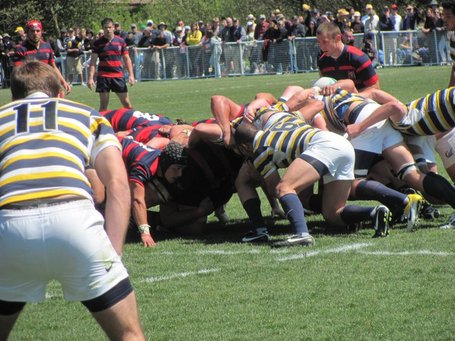 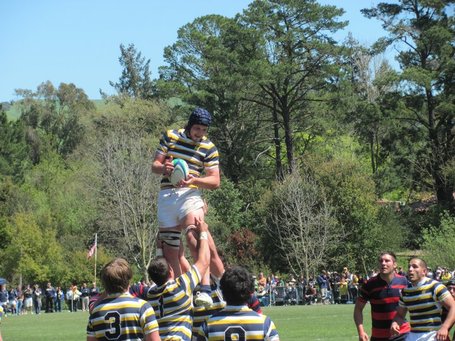 See this photo of the SMC guy trying to catch up with Cal.  That is kind of the perfect encapsulation of the second half.  Cal flat out dominated.  They were faster.  They passed better.  They won the scrums.  They were more powerful.  They scored early and often, quickly building a 20-30 point lead.  SMC fought valiantly, but could not stop the onslaught. 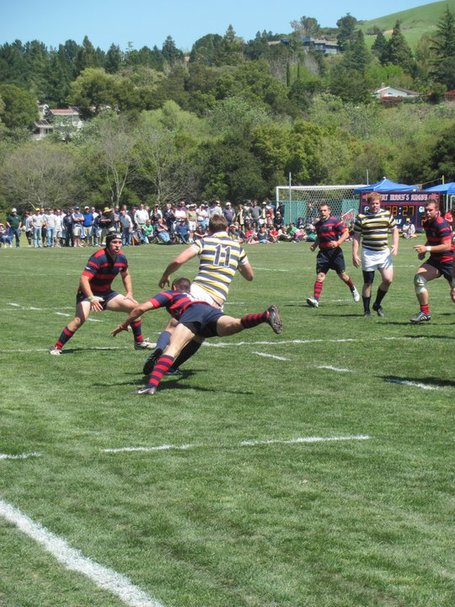 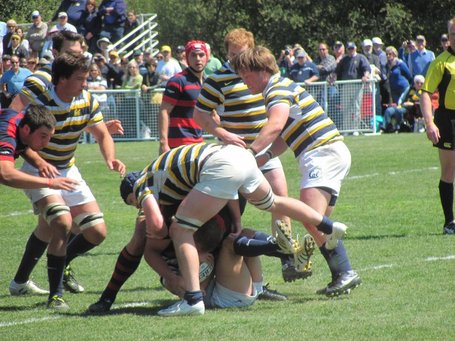 The scrums have always looked incredibly painful to me.  This is why I stuck with marching band! 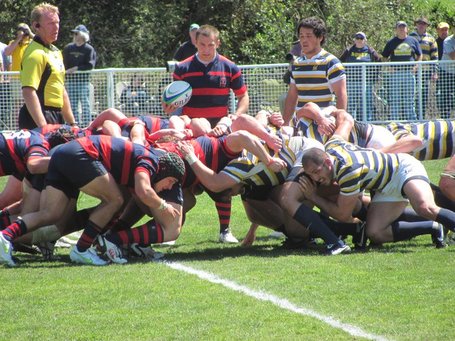 I am not 100% certain, but I think these are called rucks.  It always seems that when we have situations like this there is a player facing backwards.  There is perhaps strategy there, but I do not know it.  Sorry.  I am too stupid! 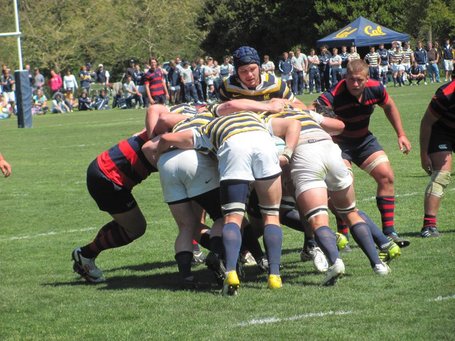 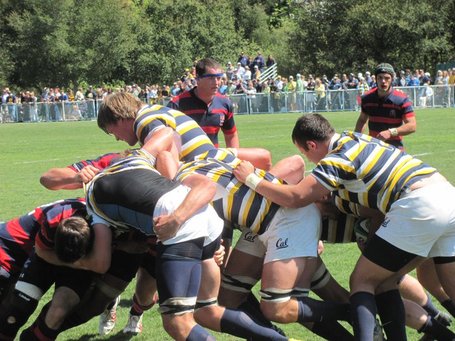 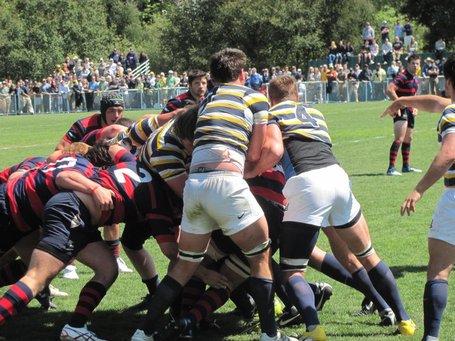 I thought that the SMC guys were going to get the Cal player here, but the Cal guys just keep pushing forward. 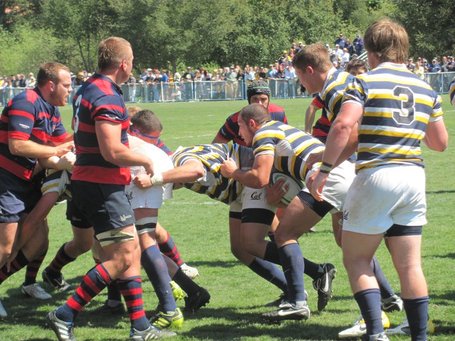 At one point, a SMC player went down.  He seemed really hurt and some staff members came out onto the field.  Oddly, play did not stop.  Cal ended up scoring a try (potentially because they had a numbers advantage?).  The medical staff put a big towel over his face and walked him off the field.  The player's hand was covered in blood.  Apparently, he had an incredibly deep cut.  Terrible.  Hope he is recovering.  I wonder why play did not stop, even though non-athletes had entered the field of play.

Here, some Cal players wait for the ball to be kicked back to them after scoring. 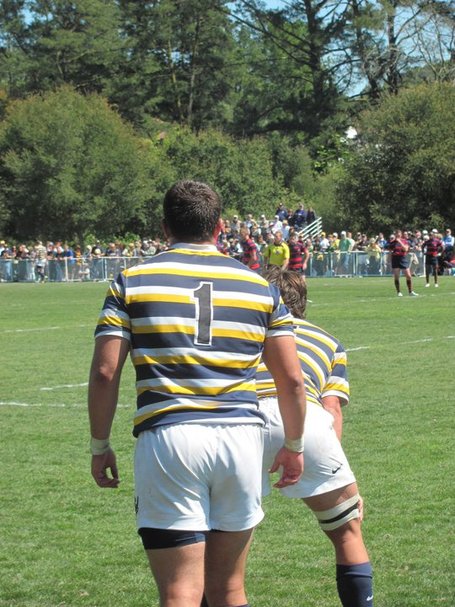 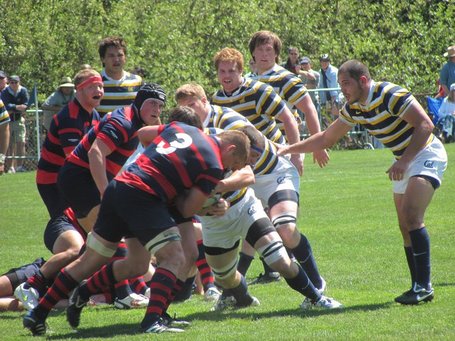 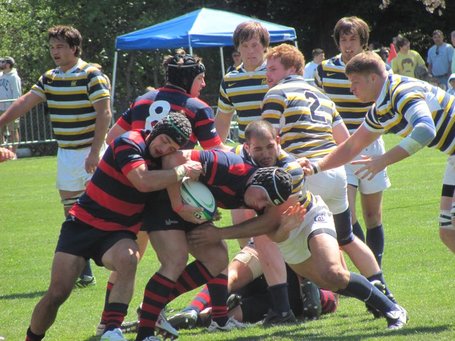 Half the game looks like this to me where a giant pile of bodies wriggle around and then the ball pops loose.  At some point, I'll know the rules!  At some point. 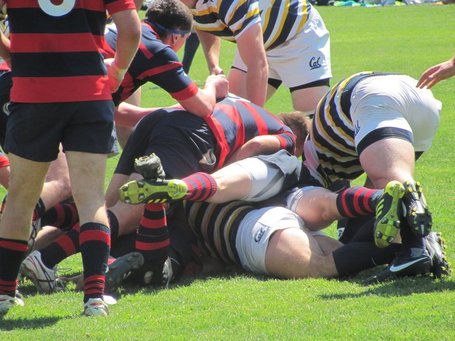 Here we go.  With Cal up BIG, SMC finally scored.  BULLY FOR THEM!  The fans were going crazy. 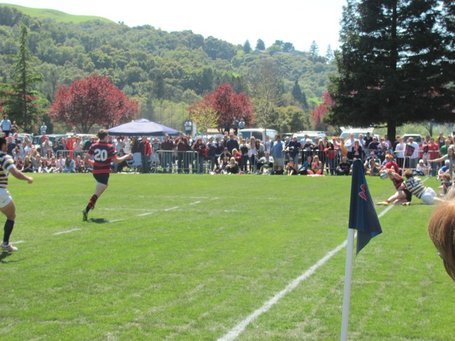 This is when I learned some etiquette.  The kickers always seem to take a lot of time to kick.  And then one or two of the opposing players can run TOWARDS the kicker and try to block it.  So, I waited until right before the kicker for SMC was about to make the kick attempt and just as he barreled forward, I yelled "C'mon, Bears!"  To me, this seemed fairly innocuous.  All the time in other sports, you try to ice the kicker or yell at the free throw attempts.  Apparently, in rugby not so much.  Apparently, in rugby, you have class.  As any dedicated reader of this site knows, class is not always my strong suit.

This was not helped by the fact that, as I stated in the last post, we had inadvertently ended up on the SMC side.  We were SURROUNDED by rabid SMC fans.  So, as soon as I yelled that out (and the kick was over) they started screaming at me for trying to break the kicker's concentration.  Yes, I was immediately public enemy #1.

"YOU CALL THAT SPORTSMANSHIP?  THAT IS UNCALLED FOR!"

"GO TO THE OTHER SIDE OF THE FIELD"

I am not making this up.  It was Gaels Gone Wild, Moraga Style!!  An entire crowd of random people who I do not know started jeering me!  This stuff only happens to me.  AND THE GUY MADE THE KICK!  If he had missed it, I probably would have been drawn and quartered by the crowd as I yelled "I WAS ONCE ONE OF YOU!"

So....it was awkward.  Not gonna lie.  So, lesson learned.  Rugby etiquette, don't try to jinx the kicker.  Got it!

I did feel genuinely bad.  Nobody wants a crowd of angry Moragans yelling at them.  Nobody.  We're the worst!  Especially after the SMC basketball team flamed out in the NIT.  So, I tried to keep my head down.  Not yell something obnoxious like "NIT SECOND ROUND!  NIT SECOND ROUND!"

Also, one of the SMC fans tried to jinx me out later!  I was taking a photo with NorCalNick and YesWeCannon, who also attended the game, and just as the photo was about to be taken, one of the SMC fan starting screaming at me.  BUT NO!  I'm made of hardier stuff than that.  My smile never quivered, my eyes never wavered! 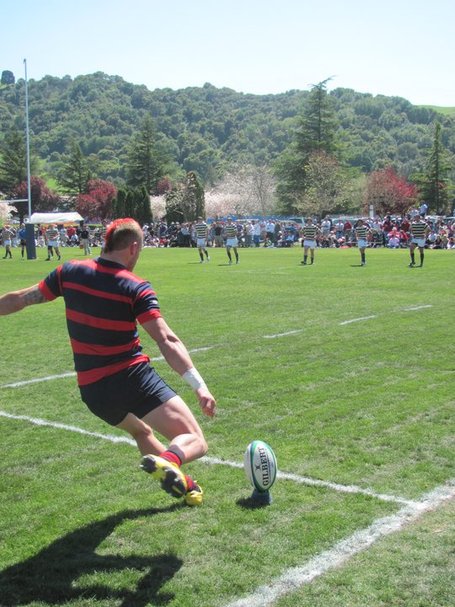 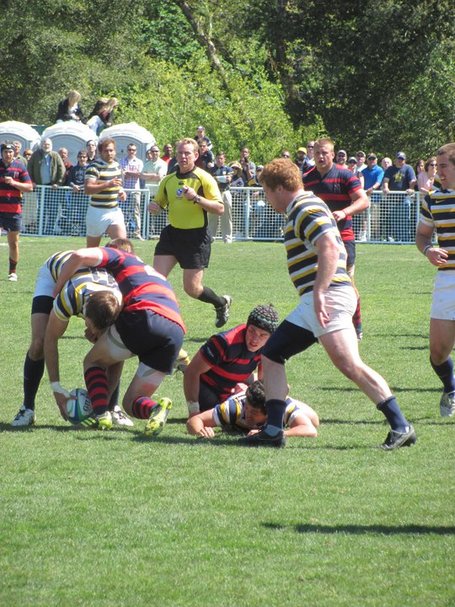 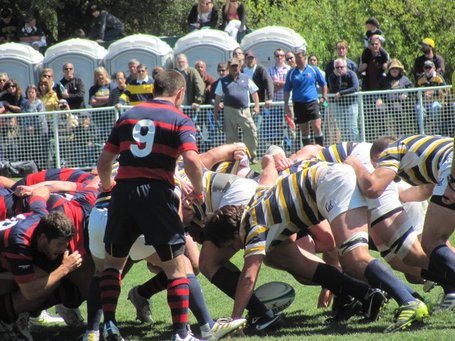 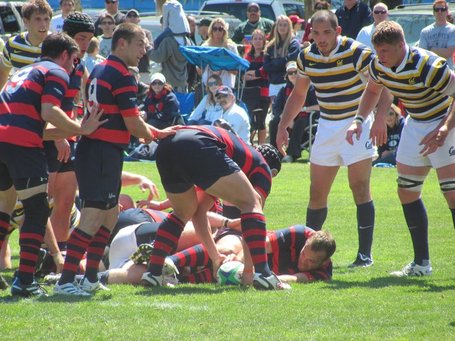 SMC scored a few late tries to make it 60-34.  Then, more classiness ensued! 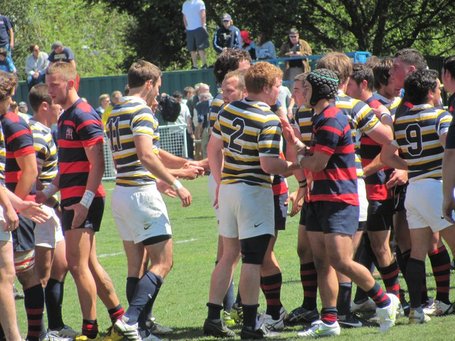 Even Coach Clark got in the action. 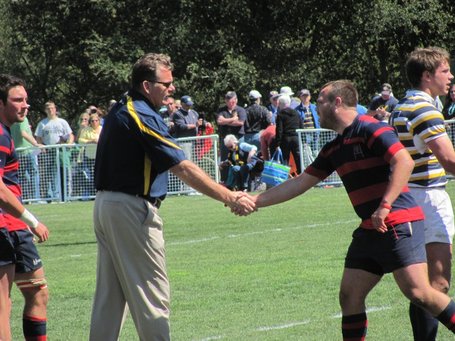 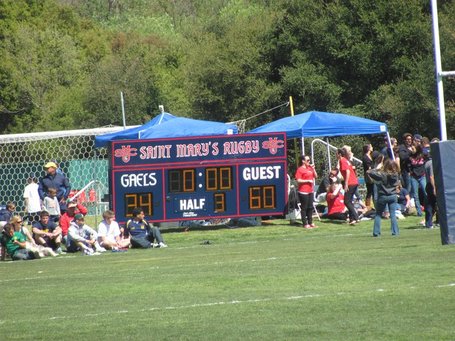 So, there you go.  Cal dominated another opponent.  I represented Cal either incredibly well or incredibly poorly.  And it was absolutely gorgeous!  GO BEARS!