What a gorgeous day in Moraga, CA!  With Witter Field currently being used for football purposes, our beloved Golden Bear Rugby team has become nomadic.  A few "home" games have been played on Treasure Island and some have seen those games.  For most, however, they have been unable to take in a game, because of the itinerant nature of the team.

The game between St. Mary's and Cal in Moraga on 4.10.11 was the closest many were going to get to a home Cal rugby game.  St. Mary's College is a beautiful campus in an idyllic setting.  With all the rains, the campus was alive with the cotton-candy hue of this tree and many other flowers. 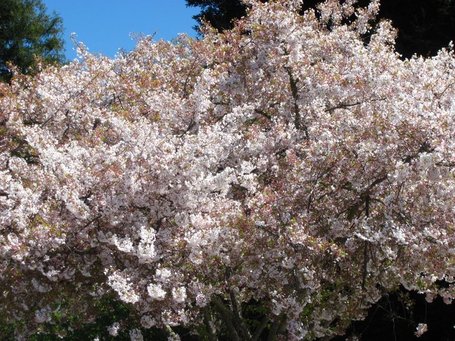 Surrounding by this physical beauty was the physical game itself.  Let's take a look at the first half where St. Mary's really held strong against Cal.  After the jump, more photos.  GO BEARS!

First things first, I accidentally snuck into the game.  I didn't realize that there was an entrance fee.  The entrance looked packed, so we parked a few blocks away from the campus and then walked.  We entered from the soccer field side (they have a rugby field and soccer field in a giant fenced area) and so, unwittingly, we just jumped the fence.  I'M AN OUTLAW WHO PLAYS BY NOBODY'S RULES!  ACCIDENTALLY!

SMC actually jumped out to an early 3-0 lead.  Cal committed a penalty of some sort and SMC got a kick, which they converted.  I am getting a better understanding of the rules, but I still have no idea what penalties the refs are calling. 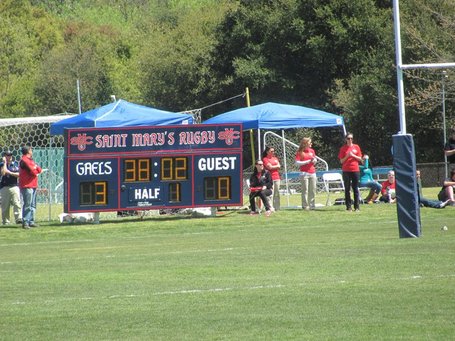 When you score, the opposing team kicks off to you, so here is Cal kicking back to SMC after their kick.  Of course, every kick is an onside kick. 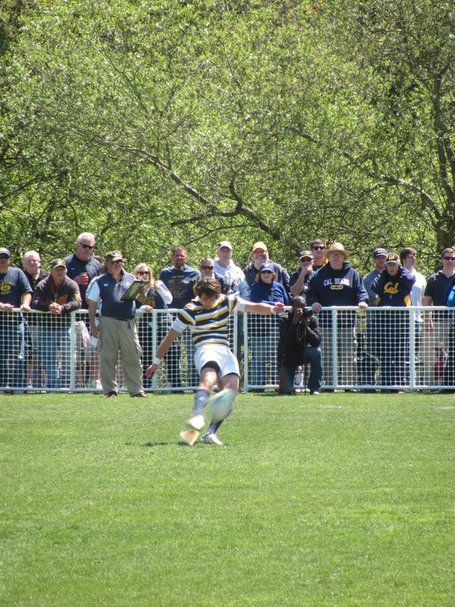 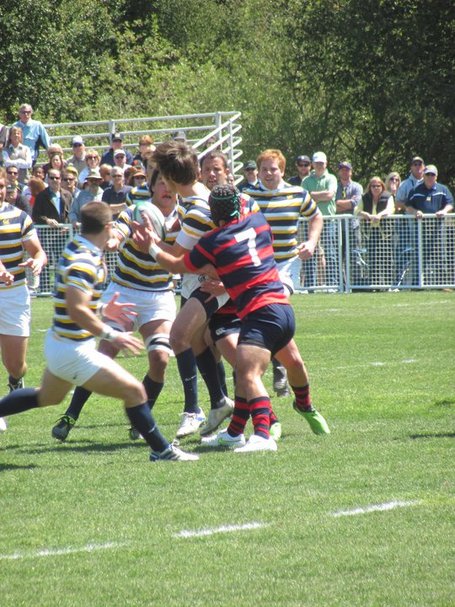 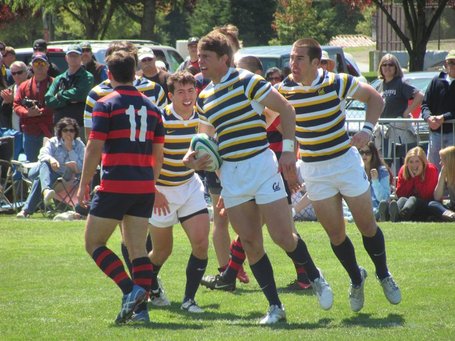 The try is worth 5 points and then you get a 2 point kick attempt.  The location of the kick depends on where you scored the try, so often times people will run into the end zone area and then run towards the middle of the end zone to get a better kick angle. 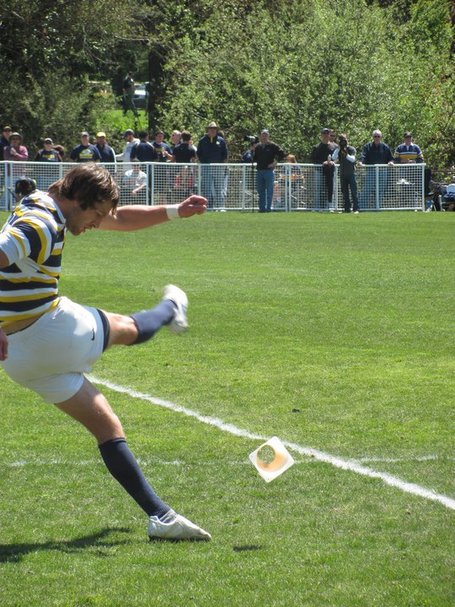 Cal got up 8-3 when they missed the kick after their first try. 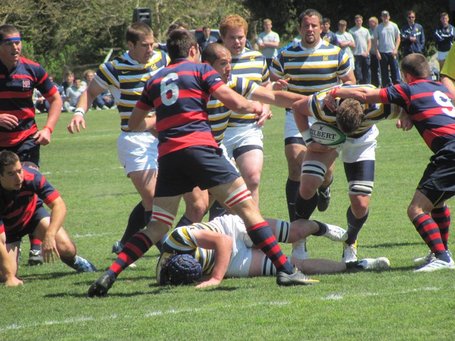 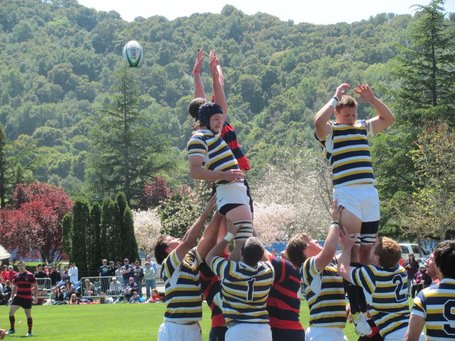 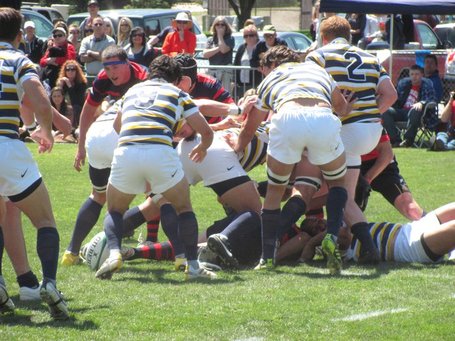 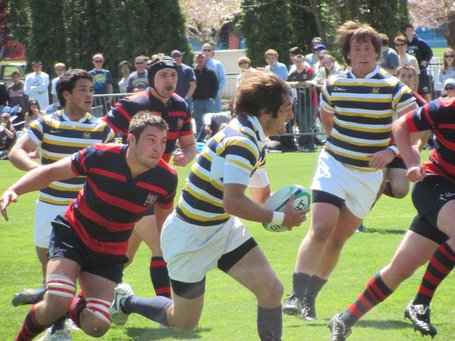 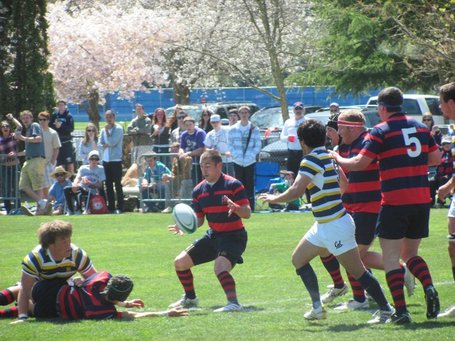 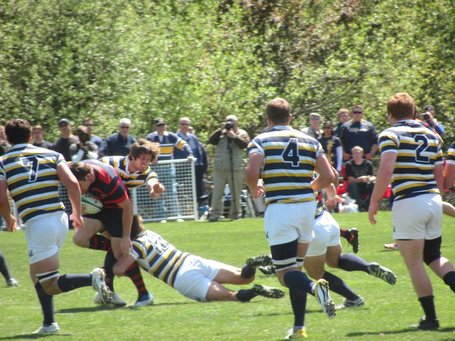 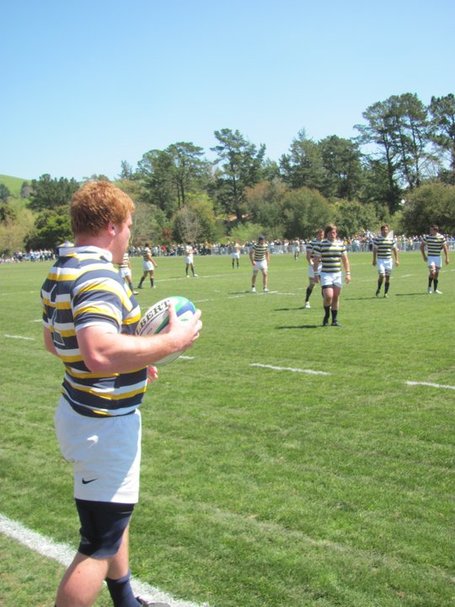 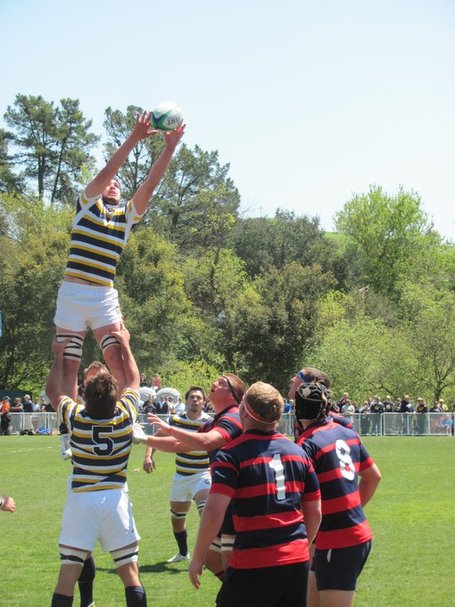 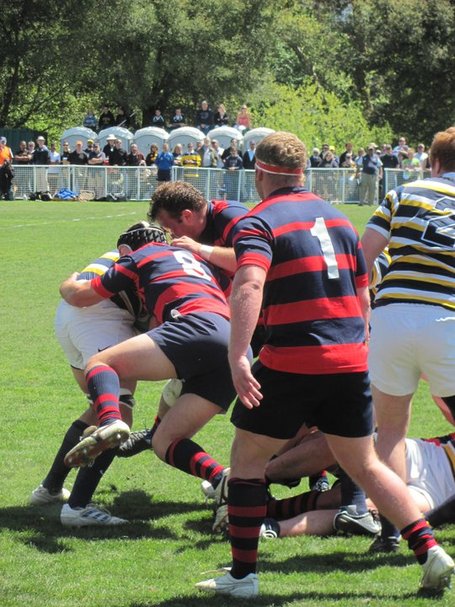 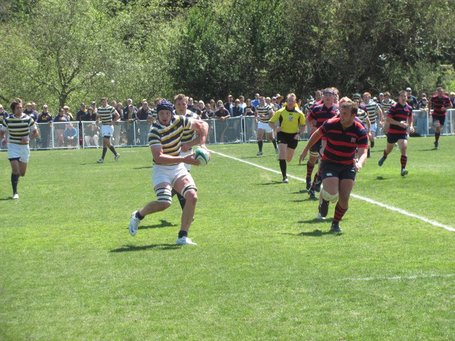 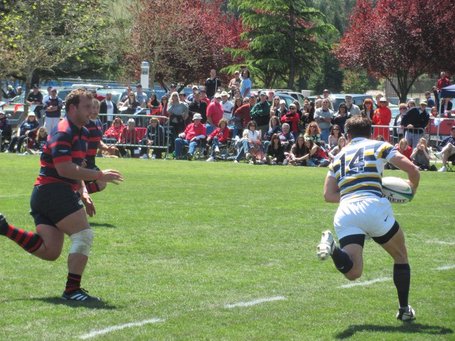 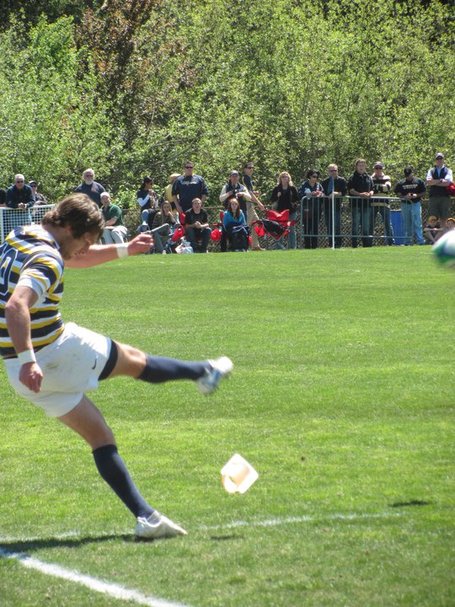 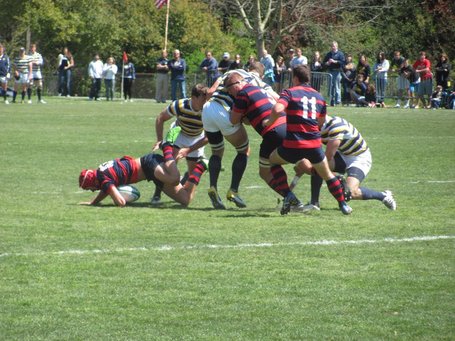 Notice the blood coming out of the ear of the guy on the right.  Most of the play in the first half actually took place closer to the SMC end zone.  Cal jumped out to that 15-3 lead, but then SMC was very aggressive.  I didn't get many photos, because I was at the other endzone area.  But SMC just kept pounding it against Cal.  They spent like 10 minutes right at the goal line before they eventually scored a try.  Cal doesn't give up anything easy. 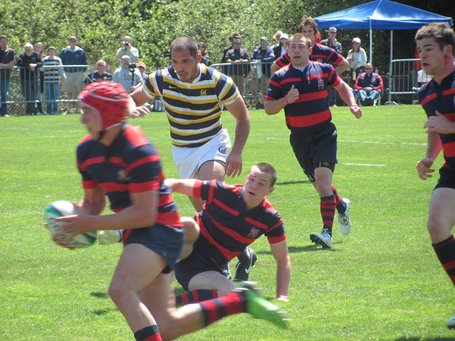 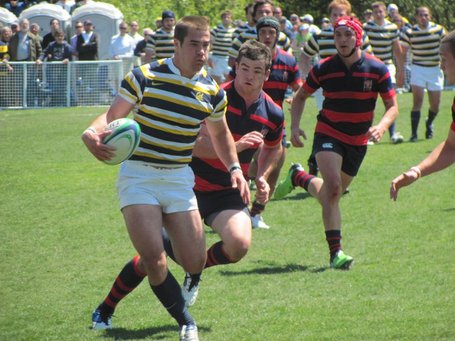 We kinda ended up on the SMC side.  There were some very ferocious SMC fans around us.  They were yelling at the ref for making some bad calls.  They yelled at one of the Cal players for getting a drink of water during a kick.  "Water is for halftime!!!"  Remember this for later, OK? 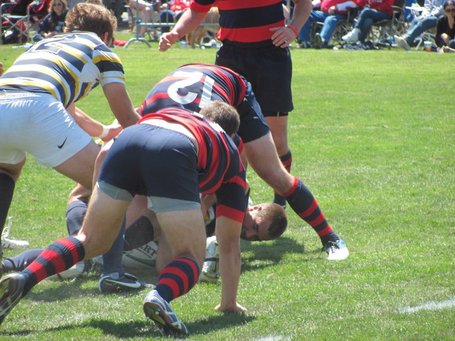 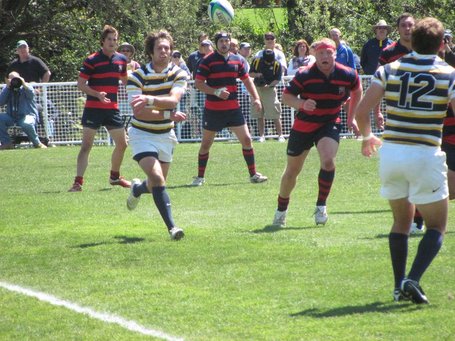 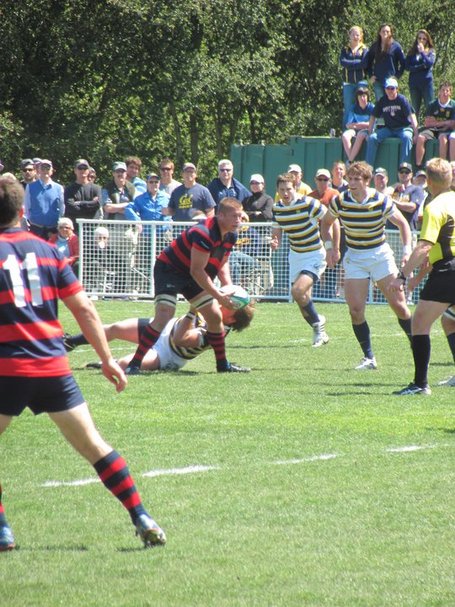 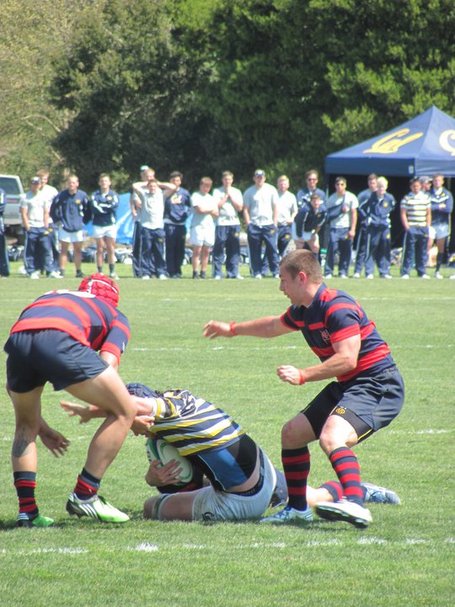 Like I said, although these photos do not reflect it, SMC was on the attack most of the first half.  They even broke through and tied the game at 15.  The SMC fans were enthusiastic! 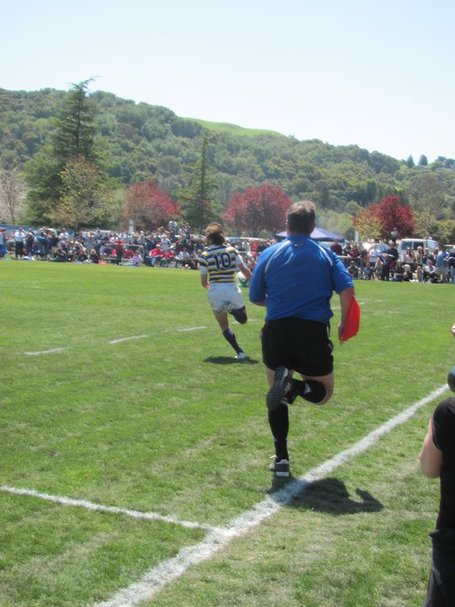 And then Cal immediately scored again!  We needed that.  Cal would score really quickly, just bowling people over. Weaving through traffic.  SMC would struggle for minutes on end to get a score.  Interestingly enough, Cal dominated the final moments of the first half.  They even scored in the one minute long stoppage time after the 40 minute clock ended.  You can see how the SMC player here seems incredibly upset by the fact that they just had to slow the Cal player down by a few seconds and the try wouldn't have mattered. 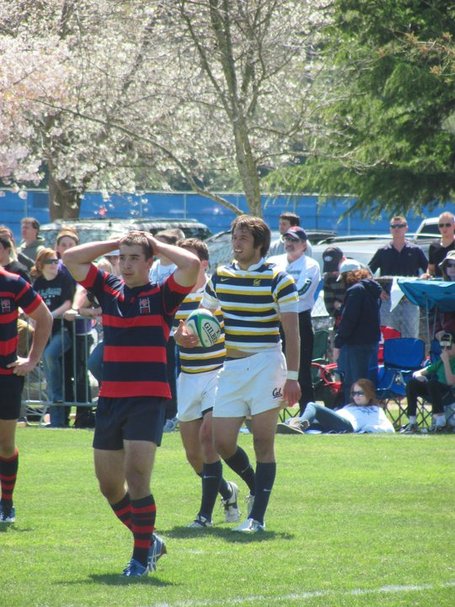 I even heard the SMC coach yell "He saw the guy, but he didn't react to that!"  He was referring to the fact that the Cal guy basically ran past everybody.  Pure speed.  Loved it!

So, what was potentially a tie game going into halftime was a 27-15 game thanks to 2 late tries by the Golden Bears. 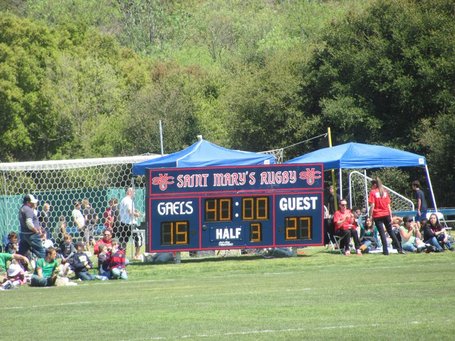 So, there we go.  The first half.  SMC probably won time of possession, but didn't come away with enough points.  The question would be, did they have the depth to keep up with the Cal athletes in the second half?  Check in soon for more photos, more essays, and a story too unbelievable to be true.  GO BEARS!