OK, so today we have our first matchup from the Brick Mueller regional. This region, anchored by DeSean, has some great footballers clumped up in the upper portion of it. We're looking at part of that today.

We have Scott Fujita, a former Cal walk on turned SuperBowl Champion. In many ways, he embodies all of the Cal spirit. Intelligence, compassion, bravery, diversity, competitiveness. He is the total package.

There is another former California Golden Bear currently in the NFL taking him on: Thomas DeCoud. He rose to prominence based off of a massive block early in his Cal career, but then showed consistency at that level. Now, he plies his trade for the Atlanta Falcons, representing Cal with the same level of dignity as Fujita.

However, only one of them can move on. The winner will face JJ Arrington or Jon Zuber. Who shall it be?

You can see the entire bracket here. Vote, vote, vote and vote. The voting ends on Friday, April 15, at noon. GO BEARS! 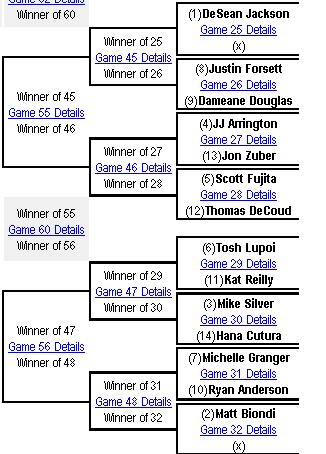 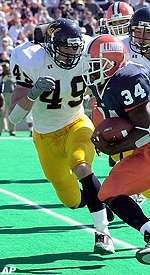 Fujita redshirted his freshman year, but not before blowing away coaches in his first camp by helping out the injury-plagued Bears at safety even though both of his hands were clubbed up with tape—one because it was broken, the other because of a nasty gash. The Bears gave him a scholarship the next spring, and he added 20 pounds to his 6'5" frame while switching from safety to linebacker. But as a sophomore in 1999, he was plagued by nerve stingers in his neck. Following the season, he had career-threatening surgery that put him in the ICU for three days and a neck halo for a week. That was March. By August, he was cracking skulls again in live practice drills. Two seasons later, he was among Cal's leading tacklers. "I call it Pat Tillman syndrome," says former Cal defensive coordinator Lyle Setencich, now at Texas Tech. "There are a few players you come across who give their heart and soul to the game. That's Pat Tillman, and that's Scott Fujita. 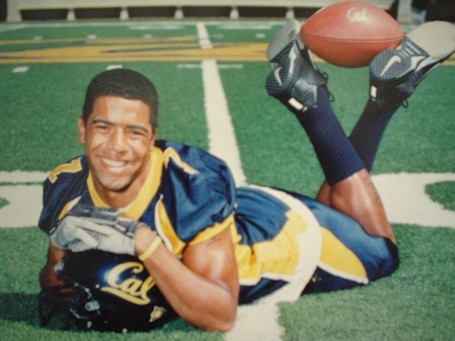 So if you do a Google image search of Thomas Decoud, you end up with this infamous photo. Freshman hazing, FTW! (Or is it, FTL?) Yeah, yeah, yeah. Laugh all you want. You know who's not laughing at Thomas Decoud? Every offensive player ever!

Thomas Decoud might not be the most impactful Cal player, but one such blogger made a great case for his reliability.

Solid. That’s what you can say about Thomas DeCoud. He found receiver. He saw receiver made catch. He tackled said receiver. And the pattern repeated itself. Even when Cal slid, he didn’t slide along with them. DeCoud hit double digits in tackles in four of Cal’s losses, although some of that could be accounted for a defensive line collapse. Nevertheless, his effort was solid from beginning to end, in spite of the other shortcomings of Cal’s defense (in 2007).

He was defensive captain (I’m like 90% sure this is true) his senior year, and was our defensive impact player in NCAA Football 08. Honorable mention All-Pac-10 his senior year. 6 games of double digit tackles....He was a very calming presence as a safety because you knew he was always there to make a play if a guy got past everyone else.

He also had that one hit which everyone has seen a million times. Ah hell, let's make it a million and one.

Decoud is now with the Atlanta Falcons, getting the last laugh at those who might still laugh at his epic hazing photo.