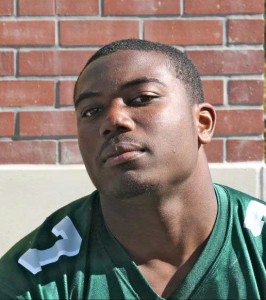 A three-star recruit according to Rivals ... second in the state of California and the NorCal conference leader in rushing as a sophomore in 2010, racking up 1,644 yards and 13 touchdowns (No. 9 California) on 206 rushes for an average of 7.4 yards per rush (No. 10 California) to earn first-team All-America, All-State and All-NorCal Conference honors ... also finished with 1,718 all purpose yards and ranked fourth in the state with an average of 171.8 all purpose yards per game ... rushed for 693 yards and three touchdowns for a 6.1 average as a 2009 freshman when Laney was 8-2 overall ... played every skill position on offense and also defensively at cornerback as a prep standout that led his squad to the playoffs in each of his four varsity seasons, including an appearance in the 2008 Sac-Joaquin section title game ... rushed for nearly 4,000 yards during his high school career when he led his squad to four consecutive playoff appearances, including a spot in the Sac-Joaquin Section title game as a senior in 2008 ... posted 1,297 rushing yards and 20 touchdowns on the ground as a high school junior, while also completing 44 of 91 passes for 785 yards and seven scores ... first Bethel player to sign with a Pac-10 school.

Find out more about CJ and his thoughts on NorCal vs SoCal recruiting, his commitment to get the Bears and NorCal to the top, and his feelings about Leland Jr Farm College.

This is Part 2 of CGB's interview with CJ Anderson. You can find Part 1 here.

Did the prospect of playing in AT&T in 2011 and the renovated Memorial Stadium in 2012 factor into your decision to attend Cal? How about the SAHPC?

CJ: For me, hearing about the high performance center actually being done when I step on campus was just amazing. The high performance center is going to speak for itself. It will probably be one of the best facilities in the country. As far as playing at AT&T Park, we did go to the Emerald Bowl when Jahvid ran all over Miami. We also went to the Emerald Bowl when USC played Boston College. AT&T Park is not a bad place. It’s not really a big part of the decision. It’s not 70,000 fans that I’m used to seeing when I go to Memorial Stadium. It’s not gonna be that big. The big decision comes down to the school. I know that every Bear fan will try to find their way into AT&T Park and make it as loud as they do at Memorial Stadium. That did play a big part into it. I can’t wait for the 2012-13 season when I can actually sit and play at the new Memorial Stadium.

How do you guys feel about coaches and programs that engage in negative recruiting practices (i.e. coaches who disparage other programs)?

CJ: Actually I don’t like that. … That’s not my character. It doesn’t suit well w/ me. I don’t talk down on my teammates and I don’t down talk any other school. Every school, no matter what their record is, they try hard and work hard every day. I mean, that’s preparation to win.

Have you had a chance to hang out with any of the current Cal football players?  It sounds like you hang out w/ Jahvid quite a lot and you guys know each other.

CJ: I have hung out and talk to Jahvid Best. We had fun. I know Chris "CJ" Moncrease who plays safety (#8). The funny thing is, Moncrease went to Laney. My freshman year would’ve been his sophomore year, but he ended up leaving for Cal after one year but I was supposed to play w/ him. It’s kind of ironic that I finally got to play w/ Chris Moncrease. Knowing Chris Moncrease when he went to El Cerrito, playing him in high school, was kind of cool. Playing on the same team w/ him is gonna real fun.

Are there any guys already you're looking forward to playing with?  Which of your fellow recruits are you most excited to see play and why?

CJ: That’s a tough one. Transfer from JC to Division 1 is a different level. For me playing in the toughest conference in JC, San Francisco have 14 different people who signed big time D1. San Mateo had 15 people that signed. We had 8. Butte had 16 too. So for the simple fact that playing against the teams I played against w/ at JC, they’ll be fun.

Also, playing w/ some of the linemen. Seeing 6-8, 6-9 tackles who can move like linebackers is kinda scary, but running behind that is kinda safe. I can’t wait to meet all the linemen and meet everybody and work my way in.

What are you most excited about when it comes to being a Cal Bear?  What is the #1 thing you are looking forward to at Cal?

CJ: The number 1 thing is to bring the City of Berkeley and the Bears family a championship. Get the team back in contention. That’s the biggest thing I want to do.

There are a lot of blogs of people who don’t know me and where I came from. To the fans – just sit back and wait. I promise they will be happy w/ what they got. I’m a hard worker. I’m very humble. I like to compete. I like to win. Cal for the first time in 9 years not making to a bowl game and going 5-7 is hardly ever heard of. Not having an 8 or 9 win season at Cal is kind of a crazy story. Just telling the Bear fans: sit back and relax. We are gonna make a push to the top. That’s where we want to be. We are gonna get things right behind closed doors. When the lights are on and the stage is set, we are gonna put on a show.

We already talk about the Rose Bowl before. The fans’ perspective really comes from whether you appreciate the importance of the ROSE BOWL for devoted and passionate Cal fans, young and old? Do you realize that winning a Rose Bowl would make you and your teammates pretty much immortal in the hearts of Berkeley alumni everywhere?

CJ: It’s a huge business. It’s in fact a goal. It’s like trying to climb the Eiffel Tower. We are gonna have to take it one step at a time. I’m not gonna sit here and say that I promise to get Cal to the Rose Bowl. That’s something not for me to say but it’s the mentality I have.

Getting to the Rose Bowl is a huge factor. What’s personal for me also is that Coach Tedford is always been an offensive-minded guru. He was a great offensive coordinator at Oregon. He had a great team and great players going through Cal. They were robbed in ’03 when Aaron Rodgers, Marshawn, and JJ  beat USC and only had one loss. They were robbed for not making the Rose Bowl. For the simple fact that you hear Coach Tedford’s job being on the line, this is the first time he’s not been to a bowl game. Making it to the Rose Bowl for him would fend off all the rumor and telling everybody in the country that a local Bay Area team can play football.

Why do all the Southern California kids get all the scholarships, get the coaches to go out and see them? In Northern California we play football too! You are kind of a perfect example. Why do you think that is?

CJ: My school is only been there for 13 years. It was a brand new high school when I got there. For the simple fact that they put a lot of great kids at that high school, more in the city of Vallejo period. Napa, Fairfield, there are a lot of great teams. We get skipped because of all the coaches wanna go down on Northern California will put us in the JC ranks. When we do what we do in the JC ranks, that’s when we finally get noticed when we should’ve been noticed in high school. For me a Northern California kid going to Cal, I’ll take care of business and all, just open eyes to the country that there are a lot of Northern California kids you gotta find.

What do you think of the uniforms? Favorite combos?

What do you think of the Cal’s student section?

CJ: Oh you know the student section is phenomenal. In ’08, when I was getting recruited by Cal my junior year, we went to the first game of the season when they played against Mich St. The student section then was just crazy. Standing at the student section at AT&T park and see how they are gonna act, nothing really changes.  Watching them in the hoop game, they are even wilder because you are not allowed to foul. If you foul, you are gonna hate it.

Maybe what you can do is do what Coach Tedford does, wave to the student section before the game. I think students will really appreciate it.

CJ: I was thinking - Auburn has this kind of walk, this cool way. It would be nice before the game to have a built-up for us, walk through the student section on our way to the stadium, on our way to the locker room before we get dressed and everything. An hour or an hour and a half before the game. Recognize the fan for what they are out there for. When we lose, they lose. When we win, they win. Just as straight as that.

How is your sense of disdain for that other school across the bay?  What's the first thing you'll do to make sure you bring back the Axe?

CJ: Hehe it was actually a good deed of me going to Cal. I actually never ever liked Stanford. It was just something about Stanford that I’ve never liked.

When you look at both cities first, you look at Berkeley, there’s a lot of poverty, a lot of homeless around there. You look Palo Alto, everything is nice and everything. The academics is not as huge. Bringing the axe back home where it belongs in Berkeley is exactly where it needs to be. Me going to Cal, there’s definitely will to play well against Stanford.

Don’t get me wrong, Stanford is a good team. They had a good year last year. Coach Harbaugh – I was 10th grade when I watched Coach Harbaugh beat USC for their only win of the year. Now he’s going to the NFL. There’s that sense of buildup. First Cal was just blowing over Stanford. There’s not a lot of chance of letting the other team win. Finally Stanford got the Axe, but they won’t have it for too long ‘cuz we coming to take it back.

I really enjoy your story. Tell us why Cal fans are going to remember your name.  What do you want the Cal community to know about you?

CJ: I am a people person. You can come and approach me. I can’t speak on any other football players because I don’t know what they do. But I’m very approachable. Very friendly and very kind. If you want to come ask me anything or just wanna hang out, just be nice to me and we can have a conversation. Most of the fans don’t even know what I’m gonna produce on the field. Just helping out the community.  If the fans run an organization and they need a head figure for help, I’ll be there to help them. That’s what it is. When it comes to the athletics stuff, that’s what I’m really gonna make my mark on, balling out and having fun doing what I’ve been doing since I was 6 or 7.

I want to leave you w/ CJ's sophomore year highlights at Laney: