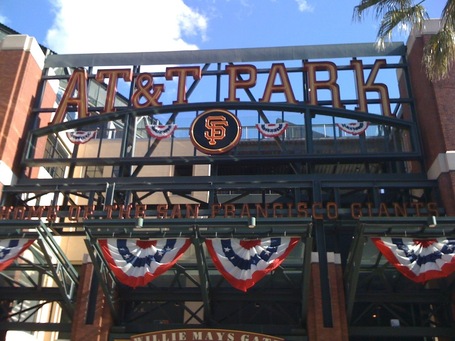 With the 2011 Season almost upon us (only 7 more months!!!), it's about time we all started thinking about the most important question of the year: where am I going to sit for the 2011 Cal Football season in AT&T Park?!

Last Saturday was Cal's AT&T Open House at AT&T Park in San Francisco. For those of you that didn't know about the event, it is basically a day where you can come to the park for the purposes of figuring out where you want to sit for Cal's 2011 college football season home games.

Because I plan on buying season tickets, I decided I should go check out the views from the various stadium seats and give ya'll my humble opinion on where to sit your asses for the 2011 season. I also went because I wanted free food. What can I say? I'm poor.

Upon arriving at AT&T Park I was whisked away via elevator to the Club Level. For those of you who don't like to use fancy words the "Club Level" means the middle level at AT&T Park. It's where the rich people have seats (not to be confused with REALLY rich people who own luxury boxes). The Club level has nice indoor bathrooms, its own food area, indoor restaurant seating, and gold plated toilet seats.

Here's the view from the Club Level: 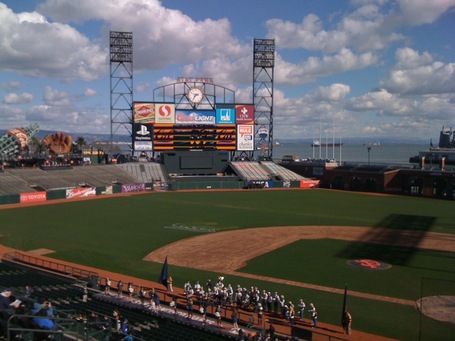 There was a big script Cal on the field in white and yellow, perhaps there to symbolize where mid-field would be. There also seemed to be a faint outline of a sideline running through the field from the first base line across to left field. I'm not really sure if they did that on purpose to sort of outline the field for people, or if it was there for some other reason.

Anyways, before I get into where one might consider sitting for a football game at AT&T Park, I guess we should talk about how the football field will be set up. The field will be set up so it runs east-west. One endzone will be along the first base line, and the other will be in the deep left field. Cal's sideline will be the sideline along the third base line. Bleachers will be installed in the right field so that they flank the opposing team's sideline.

To view what the seating will be like at AT&T Park for the 2011 Cal Football season, please see this diagram (link will open a .pdf file).

So let's get to the good stuff: what are the views like around the stadium???

Well, first off let's just get the obvious out of the way. If you're an ESP purchaser, then you're getting the best seats in the house. These are the Club Level seats from area 220 to 231. From these seats you're high enough to have a clear view of the field, and close enough to the field to not need binoculars. These are the seats to own for the 2011 Cal Football season in AT&T Park.

These are the areas where poor jokes like me are going to have to sit. Why is it such a big problem area? Take a look below. 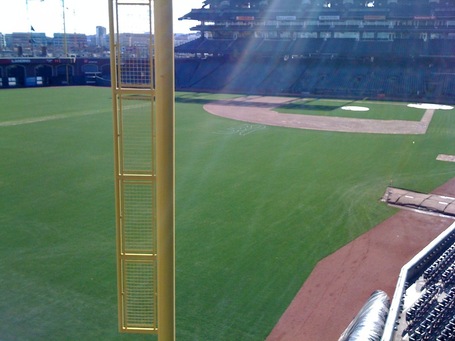 MY WHAT A LOVELY YELLOW POLE IN MY FACE.

For $700, do you really want a giant pole in your face? It's obnoxious, like TwistNHook. It blocks your view of the field like a giant spatula. And it's bright yellow like a school bus full of annoying brats. I personally wouldn't be able to stand watching a football game from here.

Now, your view might not be as bad as Section 232, and Section 233 since those seats are more towards the center of the football field the foul pole will be further off to the left side of your vision. But for people sitting in Section 234, it's going to be bad. Real bad. The view could be pretty decent here if they just removed the foul poles. I don't think that's possible though.

On the bright side, you can easily still view the replay screen off to your left. 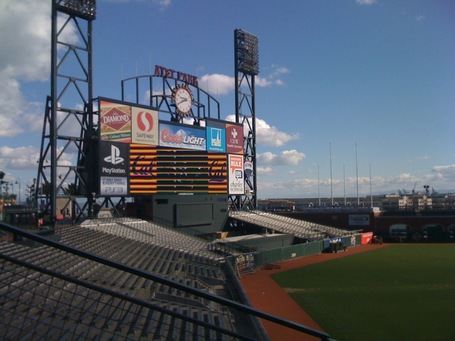 Next stop, was the "View Level," or in normal words it's the upper deck. I'm talking the nose-bleed seats along the third base line in Sections 320 to Section 331. What's the view like from here? Take a gander: 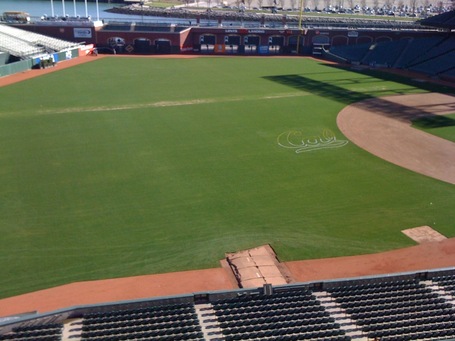 This particular photo was taken from the bottom rows of Section 328. Not bad at all. Depending on how close to the fifty yard line you want to sit, tickets in this area can cost you as low as $350 to as much as $1100 at the fifty yard line. The view isn't bad up here at all. Despite being so high up, you really don't feel that far away from the field.

But what is the view like from the TOP of the View Level? This is it: 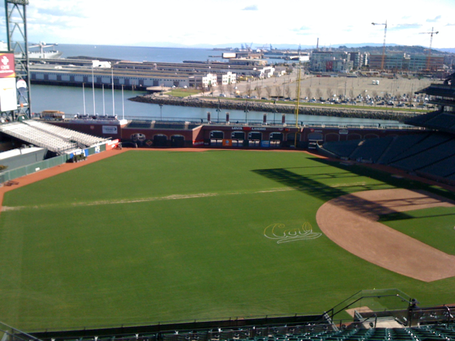 Not much worse at all. You should note that you might not be able to see the Cal sideline from the very top because the seats and other people's heads might get in your way. But other than that, it's still a decent view of the field even from the very top of the View Level (Upper deck).

Next stop on the agenda was the extreme seating views of Section 332 to Section 336. 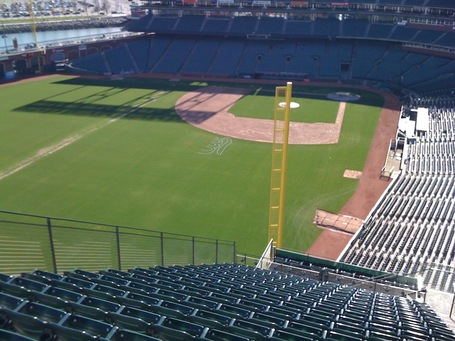 The view from Section 336 while standing.

Okay, so the foul pole is still in your way. Being that you are further away from it, it's not so in your face. But it still sucks having a giant yellow antenna-like object sticking up in front of you. What may be worse than the foul pole though, is the fact that you can't really see the field immediately below you. That area would be the endzone. Thus, when the offense is driving to the east endzone along that deep left field wall, you might not even be able to see half of what is going on! Lame.

What if you get to the very southern edge of Section 336 ? Here's the view: 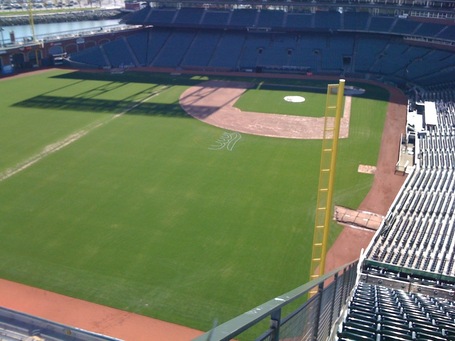 The view from Section 336 while standing.

Now, this isn't too bad. You can still see the entire field (more or less).

But what if your poor legs get tired of standing and you want to sit? 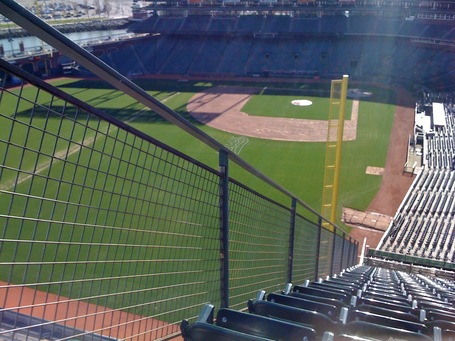 WHAT A WONDERFUL FENCE NEXT TO ME. Obviously, not the ideal seat in the house. That fence can easily be in the way of a third to half of the field. Not sure if you really want to deal with that.

I know this seating report is far from complete without pictures from all over the stadium, but I hope it's somewhat helpful in your decision on where to sit.

Here is my final opinion on the best seats in the house for football games in AT&T Park, descending in order from best to worst:

Cons: Expensive and only available to ESP purchasers.

Pros: Good view. Really high up so it's extremely easy to see player movement on the field. Slightly cheaper than similarly situated seats on the Field Level (lower deck).

Cons: You feel "away from the action" towards the top of the upper deck. May not be able to see the Cal sideline because it's below your field of vision. Can get windy and cold up here, although the very top seats are shaded.

(4) Sections A, B, C of sideline bleachers

Pros: Close to the field. Right on the fifty yard line or close to it. Close to opposing team bench so you can heckle them. Cheaper than similarly situated seats on the Field Level across the field.

Cons: Close to the opposing team bench. Still expensive. No chairbacks and cupholders.

Pros: Endzone view offers great view of running lanes, and passing lanes. You see the field from how the QB sees the field (except for being higher up).

Cons: Action is very hard to see when the play is on the opposite side of the field.

Cons: Action can be hard to see when on the opposite side of the field. Not really a true endzone view so you can't see running lanes or passing lanes that well. Not a real sideline view either.

Pros: High up. The sections directly behind the endzone (Sections 305 to 311) offer cool endzone views to see running and passing lanes. Fantastic view of the East Bay.

Cons: Can be far away from the action. Windy and cold in some areas.

Cons: Low elevation makes it hard to see things. Action can be hard to see when on the opposite side of the field. Costs up to $400 when I think there are better views for cheaper (Sections 321 and 330 are also $400 each and have much better views).

Cons: Can't see part of the endzone below you. The safety fence next to you in Section 336 blocks your view of the field. Foul pole still obscures some of the field.