The Bands Of The Pac-10: Washington

Share All sharing options for: The Bands Of The Pac-10:  Washington

Well, we are looking at the Bands Of The Pac10! This is the first part of our series and today we are looking at the Washington Husky Marching band.  We thought we'd take a look at the bands of the Pac-10 just so people can get a stronger appreciation of the various marching bands that we see over and over again in the Pac-10.  And we're doing this just in time for the Pac-12!  So, yay for timing.  First, I can't beat Chrono Trigger by defeating Lavos at the Millennial Fair and now this.  Time has defeated me yet again.

The marching band is one of the most important differences between the pro and college experience.  It is the quintessential symbol of college sports.  Unless you go to a Baltimore Ravens game, in which case you'll get confused as to where you are.  And having a Harbaugh patrol the sidelines didn't help!

Of course, Cal has the best damn band in the land, but it can't hurt to better understand those other rival bands, right?  At least the other rival bands that don't include the aural assault that is USC.  After the jump, we're looking at a lot of information about the Husky Marching Band, including their marching style, history, and what the hell a Featured Twirler is.  GO BEARS!

Let's see what the Huskies have to say about themselves:

The Husky Band enters 2010 in its 81st season. Since 1929, the world famous Husky Band has been entertaining audiences ranging from the shores of Lake Washington to Australia, China, Japan, and even Norway. Loyal UW Alumni and other band followers can always sing along to the HMB's fight song Bow Down to Washington or Tequila! which is known to Husky Fans as the HMB's signature song.

The first marching band on the campus of the University of Washington was started after two years of exhaustive efforts to establish a campus-wide band. The first rehearsal was held on Tuesday, March 5, 1901 at the University Armory. Students who participated in the band were permitted to miss compulsory military drill when it conflicted with practice. Don Myer, the bandmaster of the Seattle Military Band, led the first group.

In 1929, Walter Welke organized the official 'Husky Marching Band.' Starting with an initial membership of just 34, Welke worked to quickly build up the size of the band that had more than doubled to 70 members in just two years. The new Husky Marching Band took over the ROTC band's duties of performing at football games. Under the direction of Welke, the band adopted its current 'high-stepping' style of marching and became an innovator in the combination of on-field drill and musical performance. It was also noted as being one of the few bands on the west coast that was composed entirely of University students, a point of pride in the newly formed ensemble.

The raising of the flag is a popular tradition with the UW band: 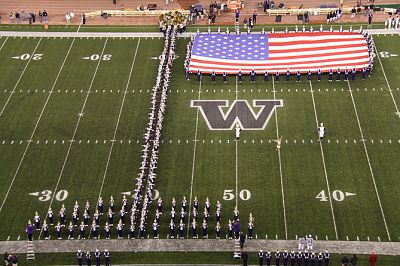 At every home football game, fans are treated to a flag-raising ceremony unique to Husky Stadium - one that always stirs a patriotic heart. As the brass and percussion sections of the Husky Band form a flagpole the width of the field (52 ½ yards), the woodwind sections carry out and unfurl and United States flag that measures 45' by 75', accompanied by a stirring arrangement of America the Beautiful. Once the flag is unfurled, the band plays The Star-Spangled Banner. The enormous flag was made specifically for the Husky Band.

This special ceremony was the idea of former Husky Band Director Bill Bissell (1970-1994) and former Assistant Director Bruce Caldwell (1965-1981). It debuted in 1978, using a wool flag that was also used for the University's commencement ceremonies. Bissell would have two flag ceremonies prepared for each game; one for good weather which would allow for the use of the United States flag, and one for inclement weather, which not involved the large flag. A decision about which ceremony to use would not be made until the morning of the game.

In 1981, a Husky Booster Club donated the money to purchase the present all-weather flag, and the band has used it at every home game since. The Husky Band has also performed this ceremony at the Sun Bowl, the Orange Bowl and also the Rose Bowl.

Here is a video:

After each first down, the band plays a unison note. For each consecutive first down an additional tone is added to the run, half a step higher.

Wow, Tedford would kill the band if they did that!

Since 1921 The Siren has sounded after each Washington score, every Washington victory and upon the entrance of the Purple & Gold into Husky Stadium. Care and operation of The Siren is vested in the band's Equipment Manager.

That makes it sound like there are hordes of orcs trying to steal "The Siren" and the Equipment Manger for the Husky Marching Band is the only thing keeping humanity from being enslaved.  Thank you, Equipment Manger, for helping us avoid a apocalyptic hellscape!  You are the best!

This one is WRONG!  The wave was created at an As game:

Perhaps the bands most celebrated tradition is the worldwide fan phenomenon known as 'The Wave'. Created at Husky Stadium by former director Bill Bissell and yell king Rob Weller, 'The Wave' has gone on to international fame. To perpetuate Husky Stadiums status as 'The Home of the Wave', band members are expected to enthusiastically participate in it when ordered by the Yell King.

Then again, given the disdain most people feel towards the Wave, perhaps we should let UW claim its birth?

According to Wikipedia, the band manages about 240 people currently led by Dr. Brad McDavid since 1994.

Here is the instrumentation:

It looks like they have similar instrumentation to the Cal band.  Sousaphones there refers to the brass instrument that is called the "Basses" in the Cal band, I believe.  Basses refers to the Bass Drum.  Or so I surmise.  They have all the percussion at the bottom.  The list flows from woodwinds to brass to percussion.

They appear to have student leadership in addition to any professional leadership.  It appears that they do not have as extensive a hierarchy as the Cal band, but do have two drum majors.  TWO DRUM MAJORS?!?!  WHAT THE HECK!?!?  WHICH ONE CATCHES THE BATON!  Maybe one Drum Major is thrown up in the air with the baton and the other Drum Major catches them!  IT ALL MAKES SENSE NOW!

The chair step is a type of high step used by marching bands. This step is named because of the resemblance of the leg in action to a leg's position when sitting in a chair. It is primarily used by bands that define themselves as traditional style bands. The bands of the Big Ten athletic conference are most widely known for their chair step.

The chair step emphasizes leg movement with a sharp pop on each step, during which the thigh of the action leg may raise as high as parallel to the ground, with the lower part of the leg and foot remaining out. As with the ankle knee step, the toe is the last part of the foot to leave the ground and the first to reconnect.

If you are thinking to yourself that you’ve seen Chair Style, then you have, because the USC band also uses it.  So, congratulations, Husky Marching Band, you are the same as USC. You have to deal with that the rest of your life.  I'm sorry.

The UW fight song is Bow Down To Washington

Here are some shows of the UW Marching Band.  Lady Gaga:


Here is a pre-game show (ignore the thumbnail, this is the UW band):

Why The Cal Band Is Superior

Well, first and foremost, we don’t have a giant track framing all of our shows!

"Hey, is that a marching band....or the world’s worst steeple chase?  Don’t they know they all have to run the same direction?"

Our fans are much closer to the action, which is great.

Secondly, we don’t play while our team is on offense.  The Husky band plays every time the football team gets a first down.  From the traditions page above:

After each first down, the band plays a unison note. For each consecutive first down an additional tone is added to the run, half a step higher.

"Sorry, guys, I didn’t hear what play we are running, the band was playing its gorgeous BFlat note, wait what’s that we just got a delay of game penalty, I’m sorry I can’t hear you over that delicious GSharp from the band!  What a luscious sound!"

Here’s another key thing to remember about the UW band:

Pre-Game Traditions - Before the Husky Football team takes the field on Saturday afternoons, the Husky Band can be seen performing a traditional pre-game show. The show starts out with the Logo pull-out W, all the while playing Bow Down to Washington. As friendly salute to the visiting team, the HMB performs the opponents fight song. The band continues to play and march, forming a large flag pole and raising a huge American Flag during America the Beautiful and the Star-Spangled Banner.

Sportsmanship has NO place in collegiate sports!

These are anecdotes from real Cal Band Members (their names have been hidden to protect the dorky).  They speak of their experiences with the Husky Marching Band.

DM09 -  The best relationship we have with another band goes to the UW's Husky Marching Band. Every year that we travel up to Seattle, they pull out all the stops to throw us an amazing post-game party, and we do the same for them each year that they come to visit Berkeley. When I was Drum Major last year and we traveled to Seattle I not only had the chance to meet their Drum Majors, but also to challenge them in a "back-bend off" (which I lost) and a "keg-stand off" (which I won).

We also get a chance to hang out with the other bands at the Pac-10 basketball tournament, but again it inevitably comes down to playing favorites and we end up mostly hanging out with UW's band.

oskisunbear - At a band party in 2006, we were ferrying them back to their hotel when the band van was clipped by a 14 year old driver, causing it to flip over the guardrail... no one was hurt.....

When we were up there in 2007.... they have a tradition of playing for frats and dorms the night before a game. A few of us followed them around and capitalized on their beer, making for a fun night.

Calnet - I was lucky enough to visit 8 of the other 9 Pac-10 schools when I was in the Cal Band from 2002-2005. I always had fun meeting people from the other band (except in Los Angeles), but the Husky Band was the best. In 2005, the Husky Band invited the Cal Band to dinner at a burger place the night before the game. Then, a couple of their seniors invited anyone who was 21 to come out to a bar. I remember a few Pac-10 bands inviting us to parties after the football game, but a Husky Band member is the only person from another Pac-10 marching band to buy me a jumbo can of Fosters at a smelly dive bar.

The party after the game that year was great, and we always looked forward to hosting the Husky Band at our parties in Berkeley. I don't remember much (either good or bad) about the Husky Band's marching style, music, uniforms, or any of that stuff but I do remember that the Washington Band was the nicest and the most fun to party with.