The Ultimate Adjusted Yards Per Attempt Rating, Part I: Ranking the 2010 Quarterbacks

Share All sharing options for: The Ultimate Adjusted Yards Per Attempt Rating, Part I: Ranking the 2010 Quarterbacks

Several weeks ago we ran a story where we used the QB Score to rate all the D-1A quarterbacks.  This time, we're kicking it up a notch--we're going to predict the 2011 performances.  But before we look into the future, let's take a look back to last season and see how everyone stacked up with Pro Football Reference's/Neil Payne's "Ultimate Adjusted Yards Per Attempt" (uAYA) measure.  The uAYA not only incorporates passing and passing touchdowns, but it also includes rushing and rushing touchdowns.  This ultimately allows it to be a more complete statistic than the traditional quarterback efficiency rating.  Additionally, it places a heavier penalty on turnovers and ignores completion percentage.  This means those who survive on decent completion percentages, many touchdowns, and many turnovers may not fare so well.  Pro Football Reference broke down the ratings for 2010 NFL quarterbacks (and predicted 2011 performances), but no one has yet used this for the 2010 college football season.  I already had most of the necessary data organized and waiting to be analyzed, so I figured why not see how things turn out?

I crunched the numbers and no matter how you spin it, Kellen Moore could not be topped.  No one's measure even came close to Moore's final rating.

After the jump we take a closer look at the formula for Ultimate Adjusted Yards per Attempt and then we rate all of the nation's quarterbacks.  Check back soon when we predict the 2011 performances.  Until then, find your favorite QB's rating and ponder how he might fare next season.

Before we see how everyone else did, let's break down the uAYA rating.  It's a blend of several measures, including rushing yards and rushing TDs.  Unlike the traditional quarterback efficiency stat, running is just as important as passing to generate the score.  Also, TDs are downweighted, completions are removed, and turnovers are more costly.  See Pro Football Reference's glossary for references to more thorough explanations of the reasoning behind the numbers.

This is a way of combining our Adjusted Net YPA formula with a QB's rushing stats and fumbles. The 18-yard bonus for rushing TDs comes from Chase's post on the value of TDs, and the -25 for fumbles comes from the Hidden Game of Football's 50-yard penalty for fumbles lost + the fact that a fumble is 50-50 whether it will be recovered by the QB's team or the opponent.

What's particularly intriguing is that they not only developed this measure as a way to compare quarterbacks, but they tailored it to be predictive.  Using another of their formulas (which we'll cover next time), you can actually try to predict performances by using metrics over which a QB has the most control.

The ratings generally range from 0 to 10, with the average sitting around 5.75.  Anything above 8 is excellent, 7 is pretty good, 6 is decent, 5 is mediocre, and anything below that is just terrible.  Only a handful managed to score below 3, and some truly special cases were below 1. 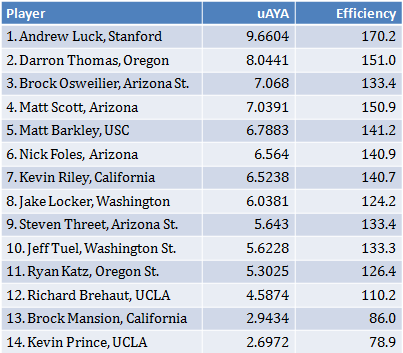 Andrew Luck was by far the most impressive QB in the conference with Darron Thomas trailing distantly (though he had a huge gap on third place).  Despite his limited play time, ASU's Brock Osweiler posted some impressive numbers.  Our own Kevin Riley sits in the middle of the pack while Brock Mansion manages to avoid last place.   It's tough to find some metric that gives Cal fans hope that Brock Mansion will have an impressive 2011 season.  Hopefully Zach Maynard or Allan Bridgford can secure the top spot and put in a commendable season.

As of now, there's not much to give Cal, UCLA, and Oregon State fans much hope about their offenses next season.  Perhaps spring practice will bring some pleasant surprises. 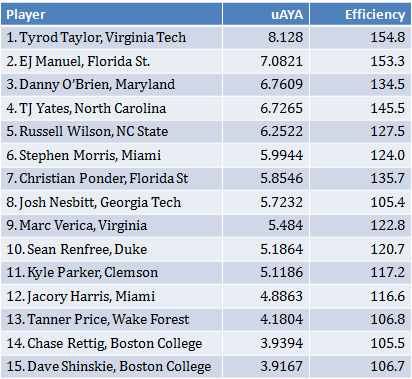 Tyrod Taylor was the class of the conference in the ACC.  Behind him were a couple decent performances and mediocrity as far as the eye can see.  Better luck next season, Boston College. 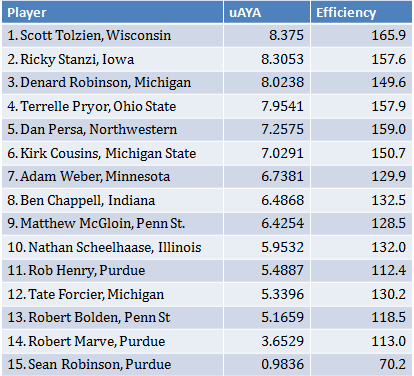 The Big Televen has several very impressive quarterbacks.  In fact, they had the most QBs with ratings above 7--an impressive feat. 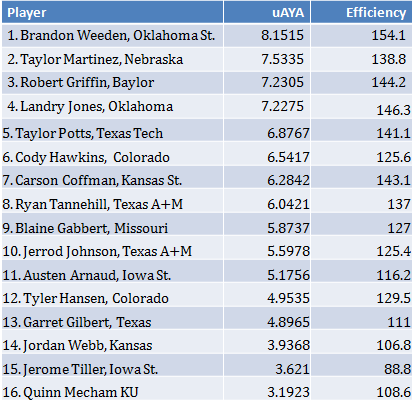 Overall the Big 12 seemed to fare decently, except Texas. 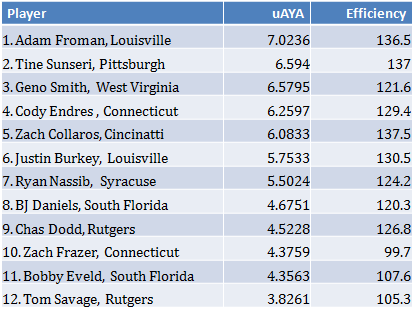 Not bad, not great--a forgettable year for the Big East, who thoroughly embarrassed themselves in a BCS bowl behind Zach Frazer and UConn. 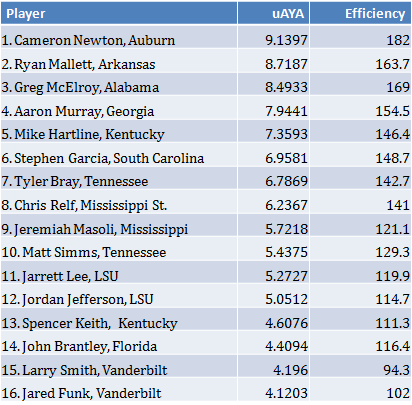 The SEC was among the best conferences for quarterbacks this season.  Even without Heisman-winner Cam Newton, the conference had a very impressive group of quarterbacks.  2011 looks bright for many of these teams...except Florida (and Vandy).

Several respectable performances, but nothing spectacular.

Now, onto the non-BCS schools. 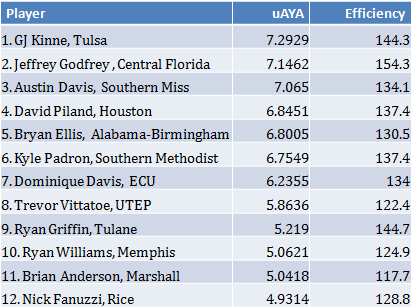 The level of insight I'll provide into the non-BCS schools is minimal.  I'll let the numbers speak for themselves. 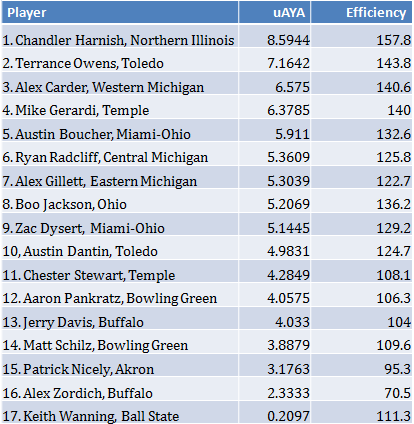 Keith Wenning turns in the nation's worst performance!  How he turned in a 111.3 is a testament to the flaws of the quarterback efficiency statistic--lousy play can be masked by enough touchdowns. 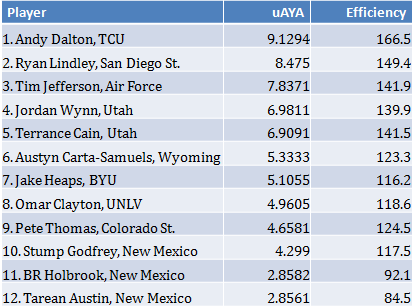 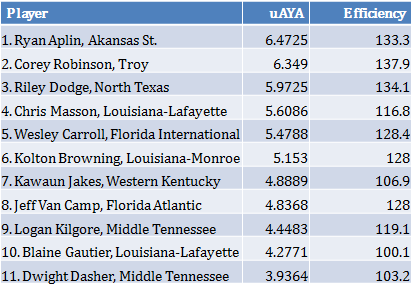 A very average set of scores. 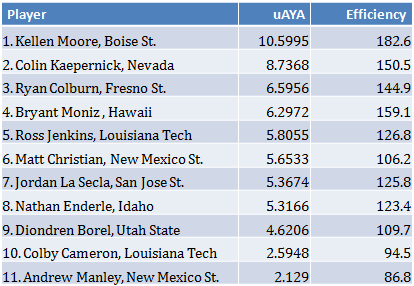 In our final conference we have two of the nation's top-5 quarterbacks in Kellen Moore and Colin Kaepernick.

Check back later for the 2011 predictions!  You might be surprised...