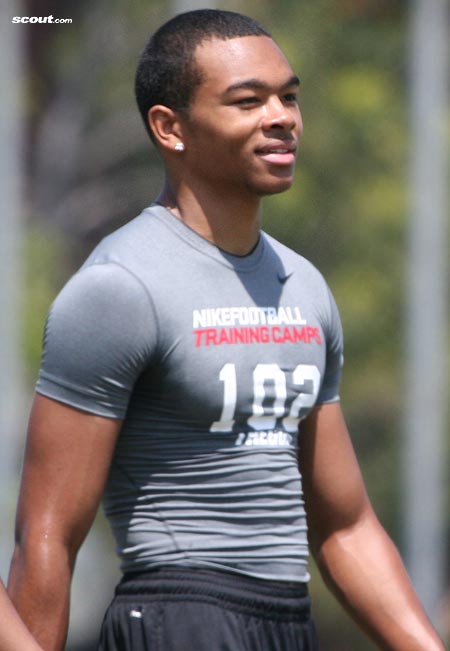 "I’ve always had my eye on Notre Dame," Treggs said. "Because of the tradition basically. Everybody knows about them, so it was good to get the offer. I plan to go to South Bend for the Blue-Gold Game on April 16, so I am looking forward to getting out there then."

"He’s a great guy," Treggs said. "He constantly e-mails me. We have good conversations."

This past weekend, Treggs visited California for the Golden Bears junior day. His father Brian Treggs played for Cal from 1988-91 and was a record-setting receiver there.

The competition is heavy for one of the best recruits in the Golden State. Eric Sondheimer, Reporter of LA Times on High School Sports, has kindly taken his time to answer CGB's questions about Bryce. Make sure you follow Eric @ LA Times Preps, Varsity Times Insider, and Twitter for future coverage on Bryce.

Coach Kenwick Thompson recently spoke at booster events regarding recruiting players that fit Cal's brand & character.  What do you think about Bryce's fit as a person to Cal?

Eric: I'm sure Bryce would be a good fit at Cal or any UC school. He has a good attitude, attends a private school known for preparing its students for higher education and has two parents who were both UC graduates.

Any ideas what Bryce's interests are and what he would like to pursue academically?

What are Bryce's strengths as a player on the football field?

Eric: Bryce has terrific hands, good speed and great instincts. I've seen him in practice, and he cares about getting the little things correct. He's very competitive and rises up in the big games.

What do you think Bryce will need to improve upon to be successful at the next level?

Eric: Because he's not particularly tall, he'll have to continue to work on ways to use his size to his advantage, such as relying on quickness and outsmarting defenders.

Bryce came to Passing Downs 7on7 Tournament this year this year and connected w/ Cal's first Class of 2012 verbal commit Zach Kline.  Last year he visited Cal unofficially during the UCLA weekend.  Any idea what his impressions are about Cal?

Eric: I know he keeps getting scholarship offers and is open to a lot of schools. I'm sure it will come down to where he is most comfortable and playing opportunities.

The Braves didn't do too well in their league play last season.  What is your outlook for St John Bosco this season?

Eric: St. John Bosco did much better than people thought. They gave tough games to most of the schools they lost to, particularly in the super competitive Trinity League. One play or one break could have resulted in victory. They will be ranked in The Times' top 25 preseason rankings next season for sure.

When did you first notice Bryce? What really stood out to you when you first met him?

Eric: I attended a seven-on-seven passing tournament at Dana Hills High in which lots of top teams and athletes were participating. He stood out in his pass catching, breaking away from defenders after catching the ball and never slowing up. I was impressed with his determination, his toughness and his durability playing both ways. You could see that teammates fed off him.

How does Bryce feel about the his family legacy?  Does he feel any pressure living up to his dad Brian "Trigger" Treggs who was passionate, competitive, and bigger than life on the Golden Bears squad?

Eric: I don't believe Bryce is afraid of anything. His father helps coach him, and he admires and embraces his father's legacy.

You seem to get out to a few 7on7 Tournaments. How well does Bryce's skills compare to the top-level athletes at these tournaments and how well does he impress in teamplay and connect w/ athletes and coaches?

Eric: I had Bryce ranked among the top receivers in SoCal last season, and it was a great year for receivers. He should be in the top three for 2011, and I expect him to be improved in terms of being stronger and faster based on his work ethic.

Tell me more about Bryce as a person. Do you interview him much? What strikes you the most about Bryce?

Eric: I had one extended interview and was impressed how important he placed on academics. It was passed on from his parents who made it clear good grades are a requirement for playing football. So he understands that academics go with playing sports, which makes him well-rounded.

The Irish green doesn't look good on you Bryce. Come join Richard Rodgers Jr in the Golden Bears' quest for the Roses!