Greif was a 3 year captain and two time selection to the Pac-10 All-Academic First Team.  As a sophomore, Greif was a second team Pac-10 All-Academic selection, and a Pac-10 All-Freshman honorable mention after starting all 32 games her first year.  In Cal's record books, Greif is third in games played (136, including 109 consecutive stars), third in three-pointers made (137) and ninth in three-point percentage (.337).  She is (unofficially) first all time in sock fashion, though I think the black socks are more intimidating to opposing players. 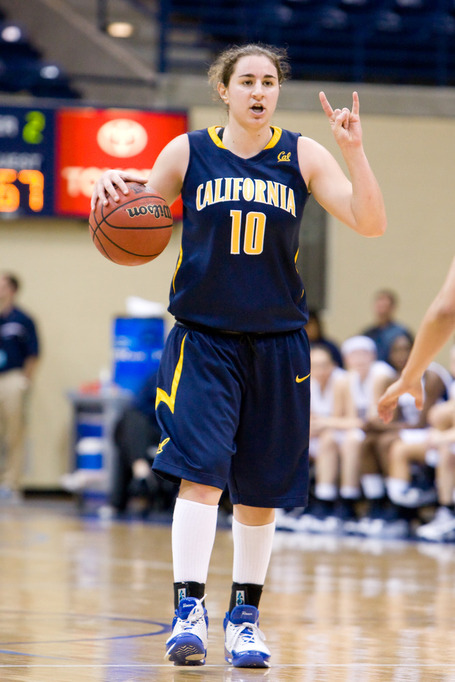 While her NCAA eligibility has expired, Greif continues her involvement with college basketball as a intern coach.  Ironically, she fills this role approximately 45 miles south of Berkeley, at Leland Stanford Junior University.  Lauren graciously took some time out of her busy schedule to answer some questions about Berkeley, Stanford, and Justin Bieber before tomorrow's Cal/Stanford game at Maples.

CaliforniaGoldenBlogs: First off, elephant in the room, let's get it out of the way...Justin Bieber's new haircut, yay or nay?  (Thanks to RemorsefulBruinBabe for answering my question, so I could write the above: "What is something happening in pop culture?")

Lauren Greif: Can’t say that I even knew he got one. Sorry world, I am not keeping up on those important details.

CGB: Ok, the real elephant now - you spent 4 years at Cal, 3 years as a Captain, 3rd ALL TIME in games played - how did it feel coming back to Berkeley not as a player but as a coach, and not for Cal but for our archrival Stanford?

LG: It was a certainly a combination of feelings. First, being in Haas was exciting because I really do love that gym and I have so many good memories of winning tough games, endless practices, great fans and some amazing teammates.

The next feelings I had were of nervousness - not sure how I would be welcomed back and the like – since, as you say, I was working for Cal’s rival.

And then there were feelings of great pride coming back to Berkeley, now part of a very successful Stanford program with fantastic athletes and coaches, who are great role models for me. I am happy to be pursuing a college coaching career and feel like I am training with the best.

CGB: After almost a full season, do you feel more comfortable facing your old team going into Battle of the Bay II at Maples?

LG: Yes and no. It will forever be "weird" to face the Bears because Berkeley is my alma mater and Cal is where I played college ball. Those will always be true and I will always be proud of what my teammates and I accomplished while we were there and very proud of the education I had in Berkeley. At the same time, this far into the season I feel very much at home at Stanford and in Cardinal Red. I also have realized that there is a lot of movement from one university to another, even within conferences – for coaches and in many positions within athletic departments - so many coaches go through the same "weird" feeling of playing against a team they used to play or coach for.

CGB: What are your duties and goals in your position?

LG: This internship is really like graduate school for coaching and I have been offered opportunities and been encouraged to pursue many aspects of the job. I see the daily operations needed to make a team run, learn and contribute to game analysis and strategy, create videos and work with recruiting material. I am involved in coaching meetings, film sessions, scouting and game planning, practices, team management, analyzing players’ statistics, etc. I watch lots of tape, do a bunch of coding and work with different coaches on different projects – sometimes Amy, sometimes Bobbi, sometimes Kate, sometimes Tara. In terms of video, I have learned a number of different computer programs to create fun videos for the Stanford players and fans. I produce a video called "Kerry Cam" (Kerry is one of the Stanford managers) after each road trip to show some of the inside moments players and coaches have as they are on the road. I also do highlight videos after each home game. I also was able to do some radio color analysis for the team on its Arizona road trip. I keep really busy and it’s been a blast.

CGB: Stanford dominated the game at Haas earlier this year - do you expect something similar Thursday, or do our Golden Bears have a shot?

LG: If we knew who was going to win the game- we wouldn’t actually play the games. Everyone has a chance against everyone else and that is the mentality that both teams should go into the game with.

CGB: At the end of your senior season, you won the NIT at Haas, draining some big 3s in the championship game. How did it feel going out like that on your home court?

LG: It was not necessarily the trophy that I was hoping to lift at the end of any of my seasons, but it was great to win my last college game (not many players get to say that) and even better that it was in front of the Cal fans and, most important to me, in front of my family.

CGB: You accomplished a great deal, individually and as a team, during your four seasons. What are some of your best memories while at Cal?

LG: I am truly proud of the things we accomplished during my years there from shocking Stanford at Maples my freshman year to going to the sweet 16 and being up 8 on UConn in my junior season. I think we underachieved some each year – but we charted new ground for Cal. Above all the wins, however, were my teammates- I knew it the weekend I came on my recruiting visit my senior year in high school- these were some good people and some great ballers!! I am happy to have spent so much time with the likes of Ash, Dev, and Trell, Lex, Tash … Kels, Mooch and all my other buddies.

CGB: Is there anything in particular that you miss about Berkeley?

LG: I miss a lot about Berkeley, especially my old roommates and all the amazing places to eat. But I think that the thing I miss most about Cal is being a student-athlete. I loved being part of that group, going to Bear SAAC (Student Athlete Advisory committees) meetings, wearing all my Cal athletic gear with pride around campus, getting ready for games, hearing cheers from fans. Being a student athlete was a very special time for me and I am glad I was able to spend it with good people at Cal.

CGB: Stanford looks poised for a deep postseason run - tell us Cal fans why we should root for our rivals in the NCAA tournament?

LG: Cal fans should root for Stanford because the west coast is always looking for more respect when it comes to Women’s basketball. Stanford is representing the PAC-10 and I think a National Championship from the PAC-10 – from Stanford, this year - would be awesome!

Thanks so much to Lauren for stopping bye to answer these questions.  As much as it pains me to hear a player who was such a leader for our Bears say she's "at home in Cardinal Red", we're all pulling for you in your coaching career.  Just come back to our side some day!