It was an abnormally gorgeous day on Saturday, February 5 in the Bay.  While other parts of the nation/world were being crushed by snow or cyclones, we had a summers day.  Somewhat odd.

While it may have been somewhat abnormal outside of Haas, inside Haas it seemed all too normal again.  After the latter parts of the Braun era stunted basketball enthusiasm, it seemed like the fans just didn't care as much.  Fortunately, last year's Pac10 championship brought Haas back.  On Saturday, it was back.  And in a big way.  The place was absolutely packed and it was rocking.  Even the opposing fans brought their all.

Unfortunately for Cal, things did not go our way.  After a hard fought 55 minutes and 3 OT, Arizona ended up besting our beloved Golden Bears.  Triple le sigh!  But given that this was a so-called rebuilding year, it is not so hard to see the positives.

I feel honored to have attended this game.  Even in losing, this team really grew up.  The future is bright my friends!  Now, let's take a walk through what the 3OT Thriller looked and felt like for those in attendance.

Cal does a great job trying to make the Haas experience full by having a lot of action going on outside.  There are bouncy castles and other various things as you approach.  Plus, the Cal band gives a performance! 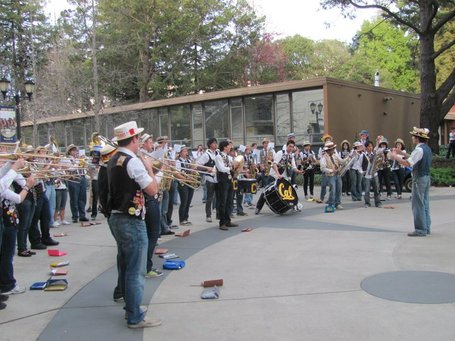 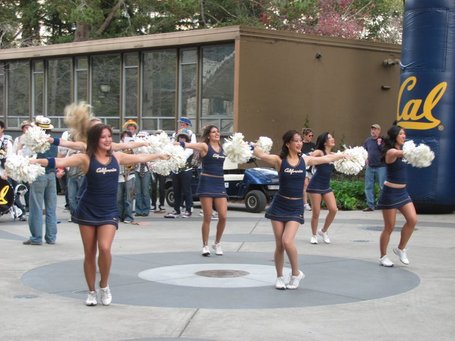 When we got in, Arizona was warming up.  Here is All Galaxy player Derrick Williams.  Note that he has a cast on his arm.  He has a finger injury that loomed large in this game.  He never quite seemed in sync.  Ultimately, he fouled out before OT and was a non factor for the last 15 minutes of the game. 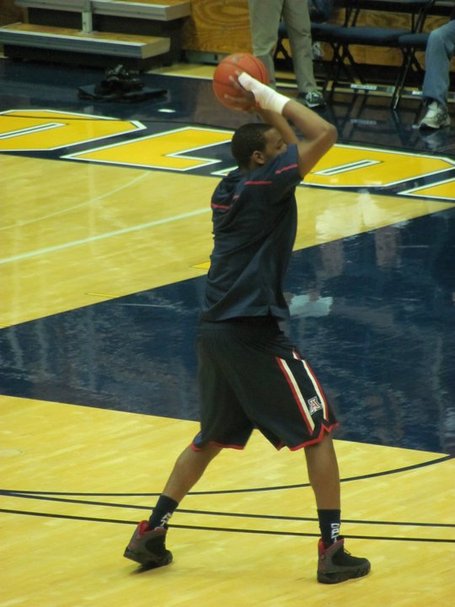 Soon, the Cal team came running out to practice.  They started off with some passing drills. 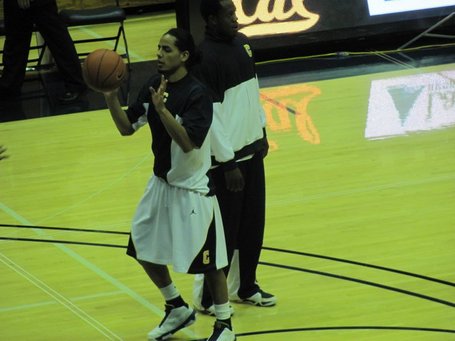 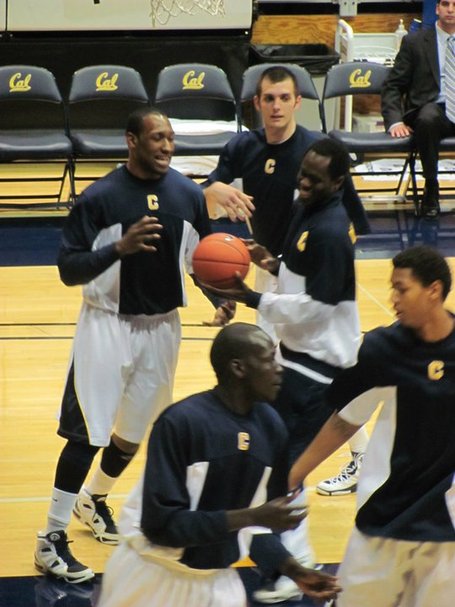 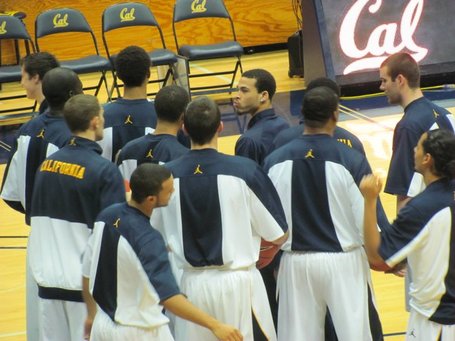 Then, they did the standard lay up drills. 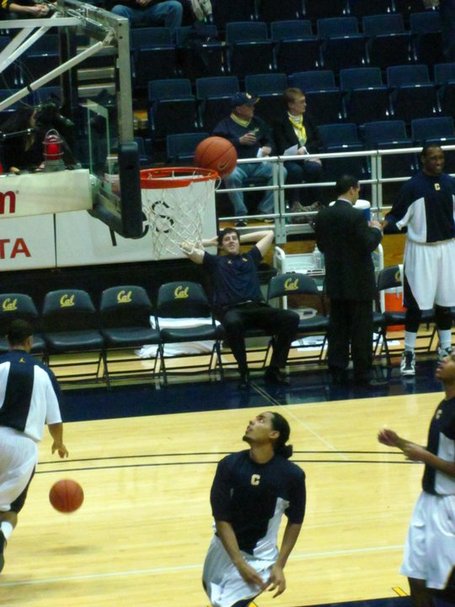 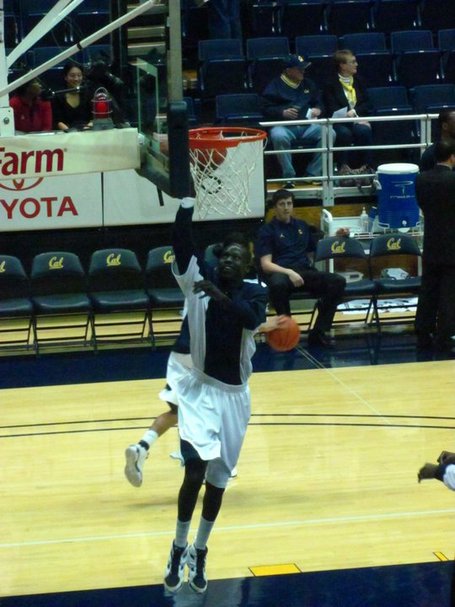 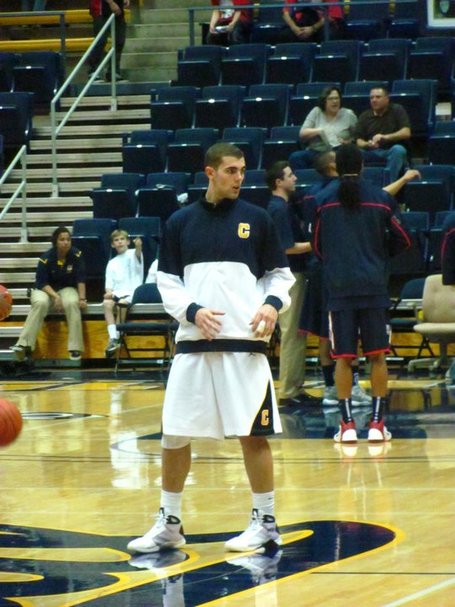 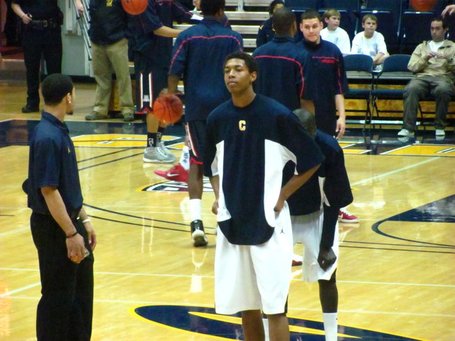 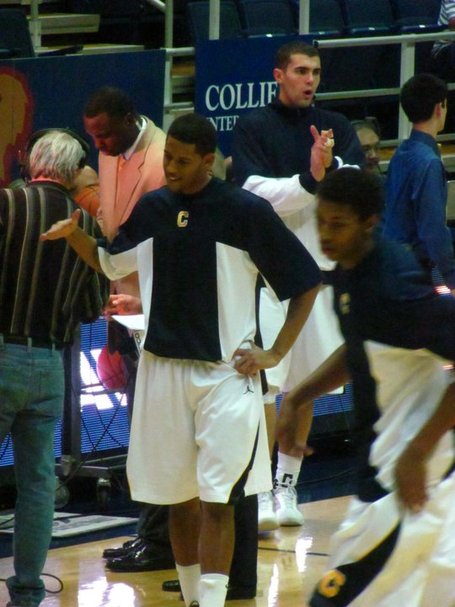 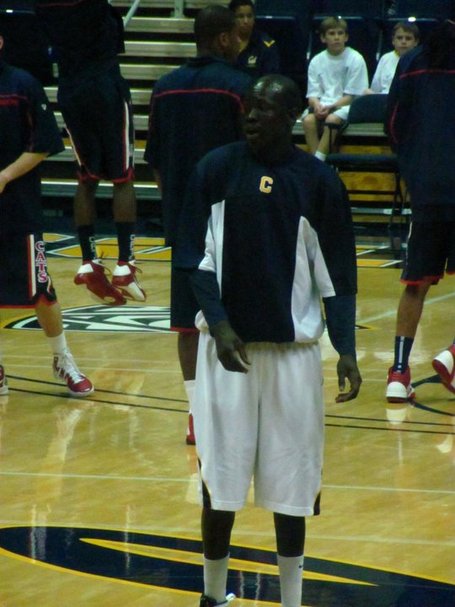 I said Hi to valued CGB reader FrankCohen before the game.  He promised me 100% that Derrick Williams would not lead Arizona to victory.  He was right!

I said that meant there was a 100% chance somebody else would lead Arizona to victory.  Momo Jones is somebody else.  I WAS RIGHT, TOO!

FrankCohen had to run off to be a TV superstar in this promo. 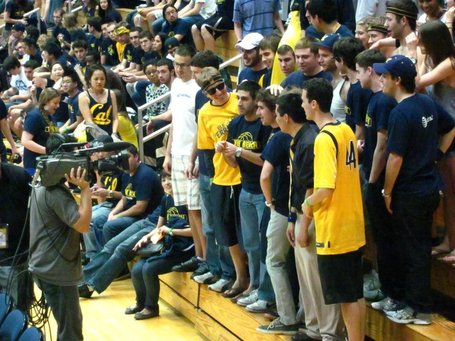 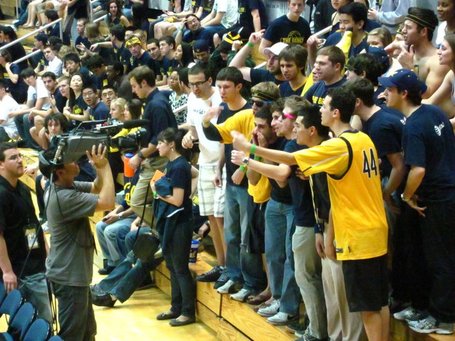 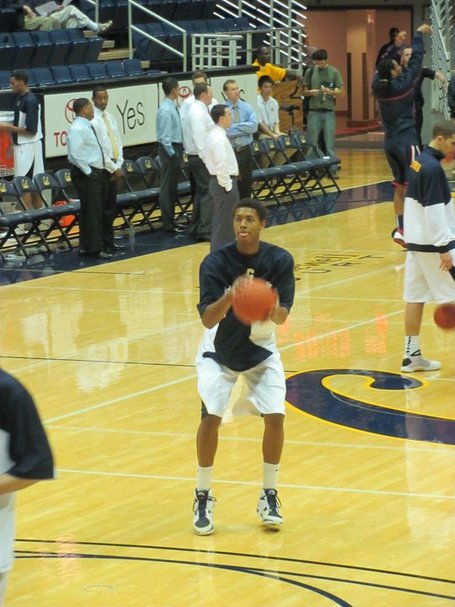 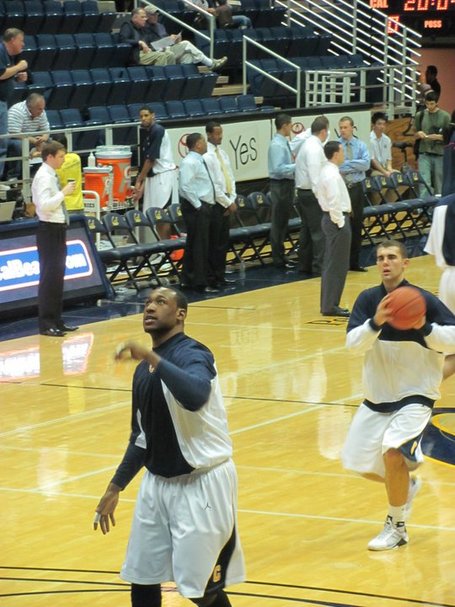 Notice the gorgeous glow of the sun as it passes past the windows on the west side of the pavilion.  It was unbelievable. 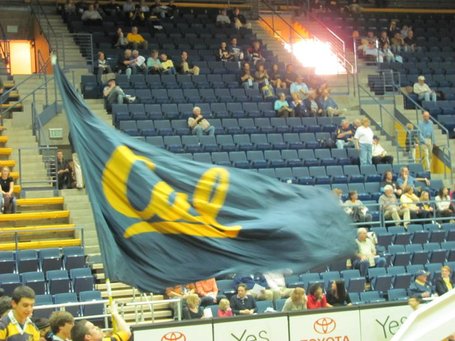 The band came rolling in to start this thing up! 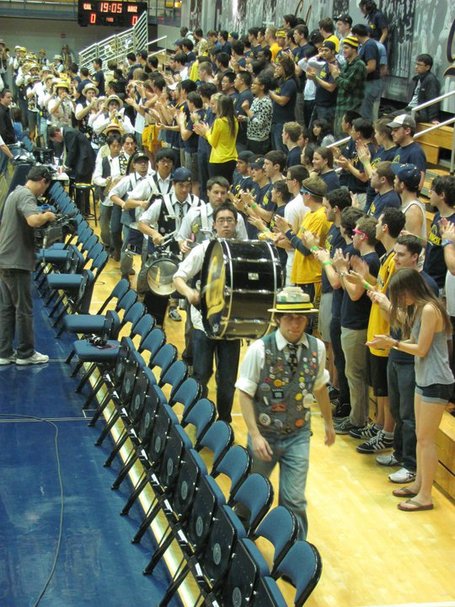 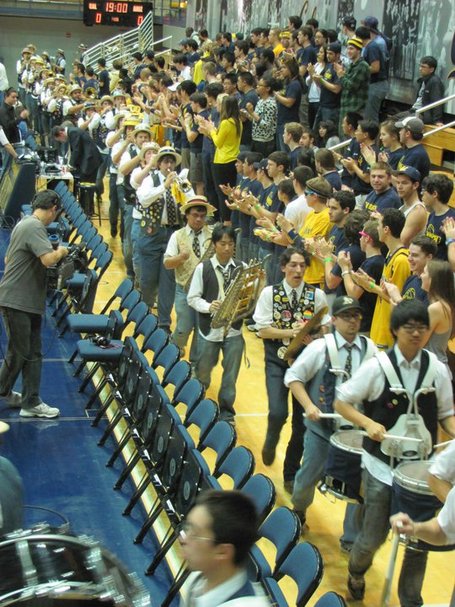 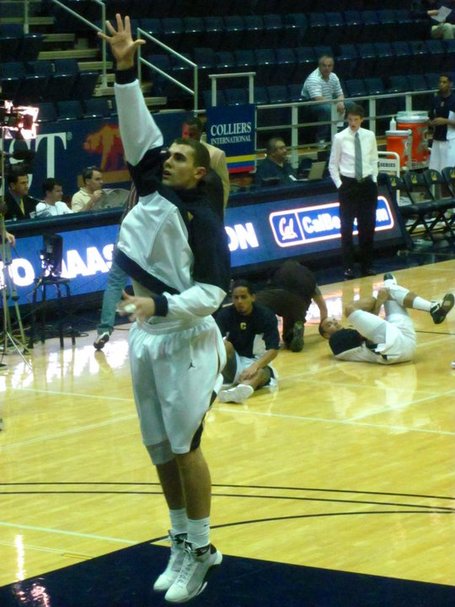 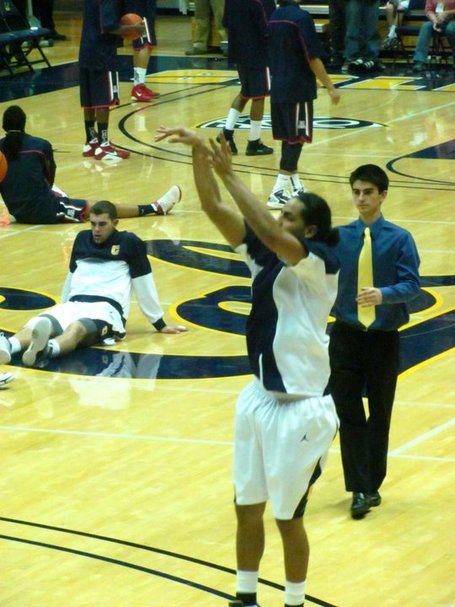 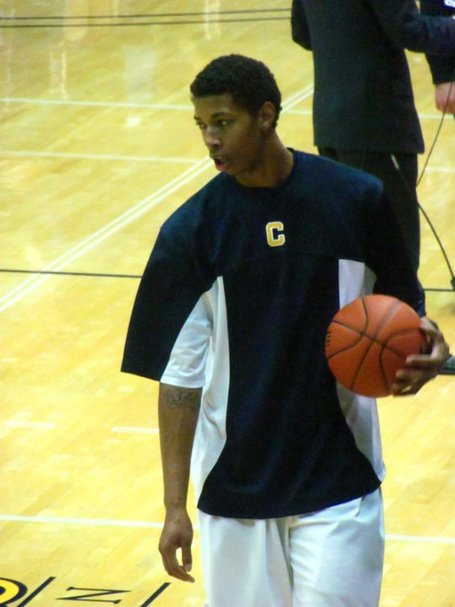 It's an announce off! ANNOUNCE OFF! 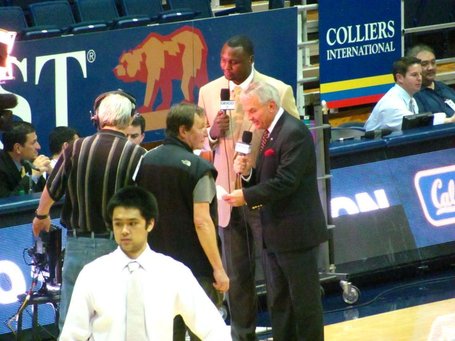 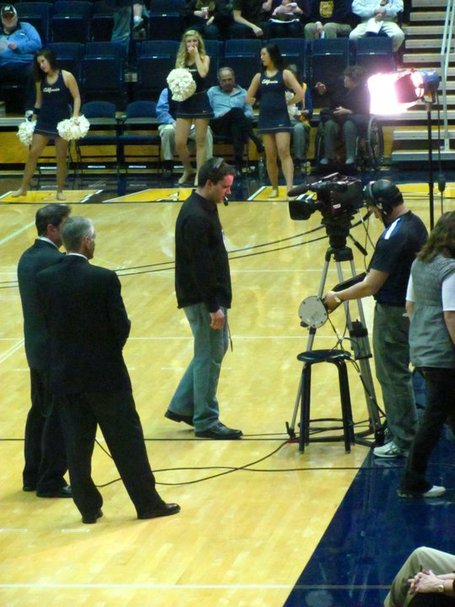 The team captains came to mid court to, I presume, thumb wrestle to see who got the ball first. 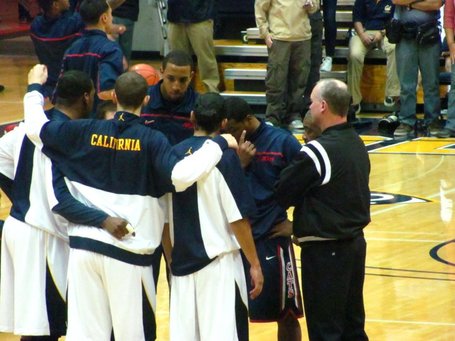 The band did the national anthem and then we all sang Hail To California.  For everybody who hadn't memorized the words, they had them up on the big screen.  That was good, because I thought you just sang "Hail" over and over and over again. 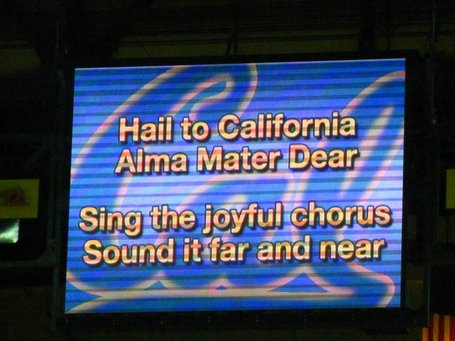 Sandy Barbour gave a game ball to somebody. 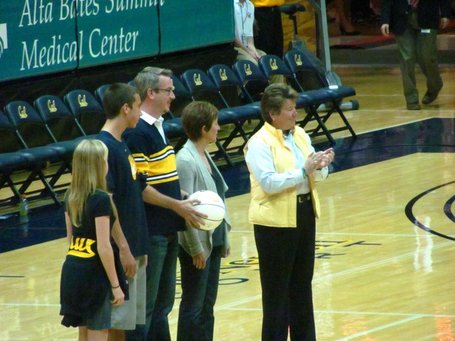 And soon it was time for the game to start.  I don't want to overload with photos.  We can take a look at photos from the game itself in the next post, coming soon.  Thanks for reading.  GO BEARS!