The traditional quarterback rating is not a perfect measure. The NFL formula is a messy, convoluted statistic that some argue places too much emphasis on completion percentages and touchdowns and not enough emphasis on yardage gained. Worse yet, the measure does not take into account yards gained (or lost) on the ground, masking the effectiveness of running QBs. The NCAA quarterback efficiency rating is more straightforward than its NFL counterpart, but it is subject to the same criticisms about completion percentage, touchdowns, and running yards. The NCAA formula is laid out below. For the NFL formula go here (warning, it is one nasty, ugly, intimidating formula).

Utah State sports economist David Berri devised a more intuitive formula that addresses some of the common criticisms lobbed at the passer efficiency rating. Berri calls his measure the QB Score and it looks like this:

The traditional passer efficiency rating tends to take on a "more is better" approach: if players throw a bunch of TDs and hundreds of yards, they can get away with a fairly high turnover rate. Berri's measure has a different philosophy: if you generate yards and avoid turnovers, you will be rewarded. As we will see, comparing the two is an interesting endeavor.

In his book The Wages of Wins,

Berri and several other economists break down several other player efficiency stats in a variety of sports. If you're interested in this topic, it's a worthwhile read.

Anyway, I was intrigued by his QB Score and decided to implement it on quarterbacks from the 2010 college football season. No matter how you crunch the numbers, Kellen Moore and Cam Newton were the two best quarterbacks in college football this year. After those two, things get more interesting when we compare QB score to passing efficiency (who else had never heard of Chandler Harnish?).

After the jump I run the QB score for every quarterback in every conference and compare those score to traditional passing efficiency ratings. The results may surprise you...

Before we look at each conference, let's get a better intuition about how this measure differs from traditional efficiency. As you may have noticed from the top five in QB score, you can build up a decent QB score without having a spectacular passing efficiency rating. Those players simply take care of the ball and generate plenty of positive yardage. You can however, have a decent passing efficiency rating coupled with an awful QB score (and we'll see plenty of those). Those players tend to have turnover issues. Nothing hurts the QB score more than turnovers. Players who turn the ball over at high rates can have okay efficiency ratings, but they tend to have awful QB scores (see Jacory Harris).

Comparing the two scores with words and formulas is nice, but pictures really help tell the story. Let's look at a plot of QB scores plotted against passer efficiency ratings. The SBN-autosized image is a bit tough to read, so go here for a massive 1920x963 version. (Note: I only calculated QB Scores for quarterbacks with 75 or more passes). 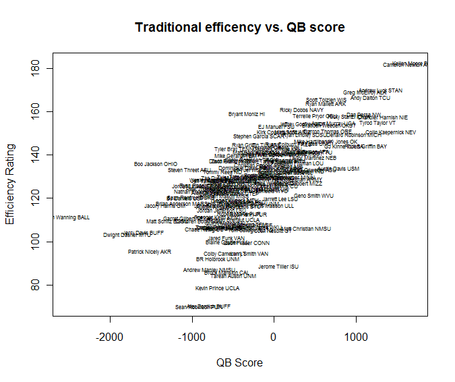 The correlation between the two measures is strong, but not that strong (.690). 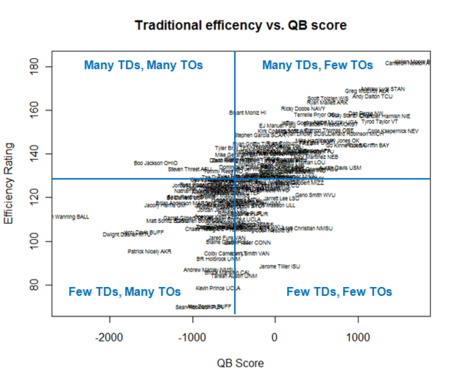 Now, let's look at each conference starting with our own Pac-10:

I'm not surprised to see Luck and Thomas at the top, but Brock Osweiler? He only saw substantial playing time in the final two games, but he's a perfect example of a guy with a solid QB Score and a so-so passing efficiency rating: he may not have a great completion percentage (56.9%), but he generates a lot of yardage (324 per game in his two starts) and didn't have a single turnover.

Another surprise is Matt Barkley. He had the third-highest efficiency rating, but he finished in the bottom half because he does not generate that much yardage and he throws a fair number of interceptions. He's much improved over last year, but he still has work to do.

If Kevin Riley had a functioning O-line, he probably could have finished in the top-5.

Even with a functioning O-line, Brock Mansion probably wouldn't finish in the top-5.

Here's a plot you can actually read because it has only the Pac-10 QBs. Kevin Riley and Matt Barkley are sitting on top of each other. 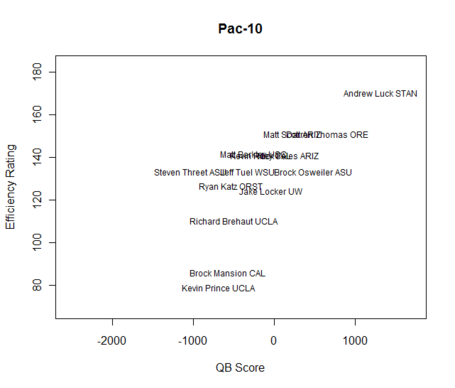 Now, for the rest of the conferences:

Overall, these numbers are pretty bad. Except for Tyrod Taylor and TJ Yates, there was not a whole lot of good quarterbacking going on in the ACC last year.

Jacory Harris has the dubious honor of being the worst (by far) quarterback in the BCS conferences. He is an interception machine and that killed his QB score. A year ago this statement would have been inconceivable, but the 2011 QB battle at Miami should be fierce. 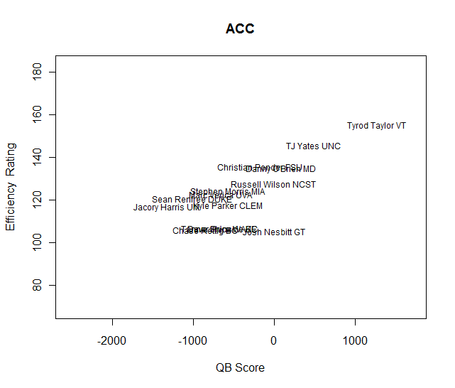 The Big Televen enjoyed a wealth of good quarterbacks last season. If he didn't throw so many interceptions, Denard Robinson would have taken the top spot.

I'm going to guess it was a pretty crappy year at Purdue. 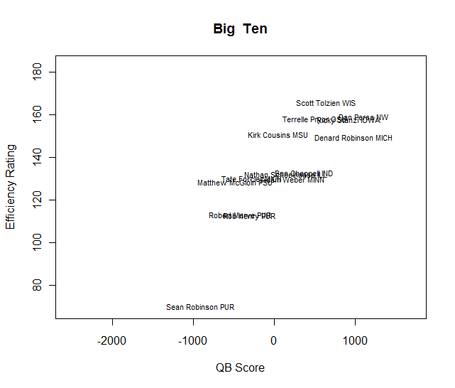 Robert Griffin? I wasn't expecting that. It helps show that with the QB Score, more does not necessarily mean better. Landry Jones' 4718 yards and 38 TDs were not enough to secure the top spot. 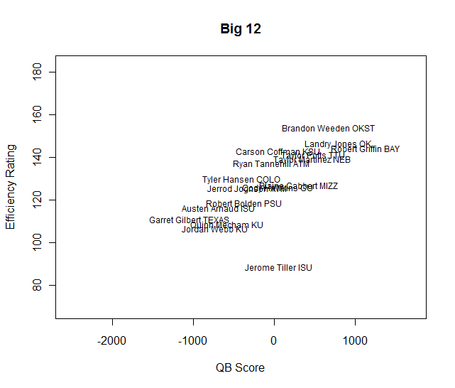 Like the ACC, the Big East also had some pretty bad quarterbacking this season. It must be something in the water out there on the East Coast.

How South Florida won 8 games this year is beyond my comprehension. 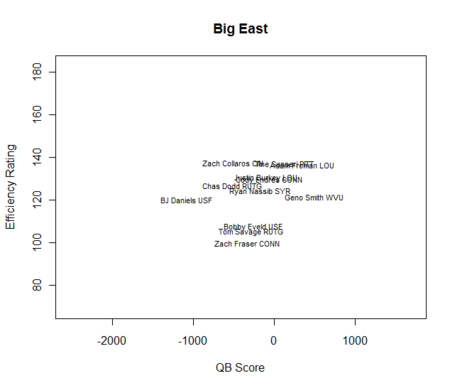 The SEC was stacked with good QBs last year. 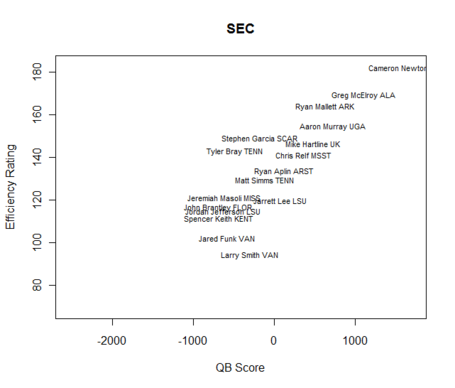 Now, onto the non-BCS conferences and a bunch of QBs no one has ever heard of (except for the independents and a few exceptions from the MWC/WAC). 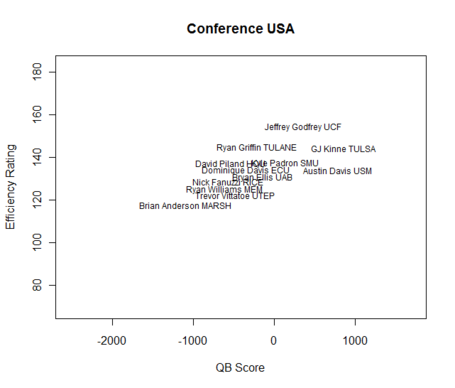 Army and Navy did pretty well this year. The same cannot be said of Notre Dame. 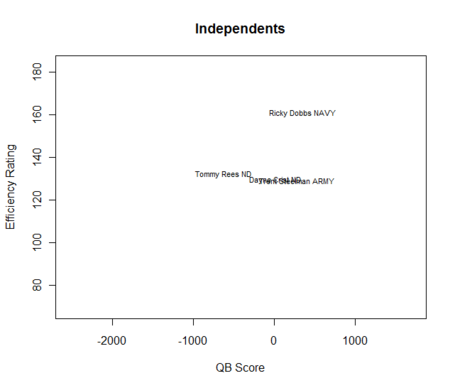 Chandler Harnish quietly put together a spectacular season with 2530 yards, 8.66 yards per attempt, 64.7% completion, 25 TDs, and only 5 interceptions. He also ran for 836 yards and 5 TDs. Look for Harnish to have a spectacular senior season in 2011.

It looks like Buffalo has not exactly adjusted well to the post-Zach Maynard era. 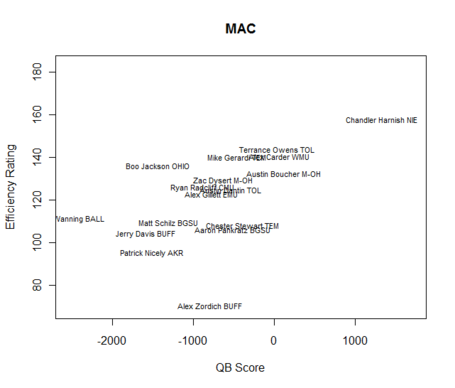 Andy Dalton towered above the rest of the MWC. TCU is going to miss him next year. 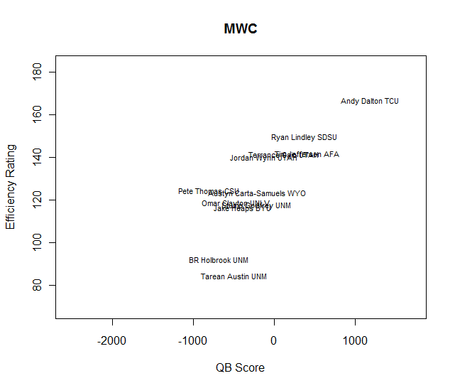 I didn't even know which conference most of these schools were in. 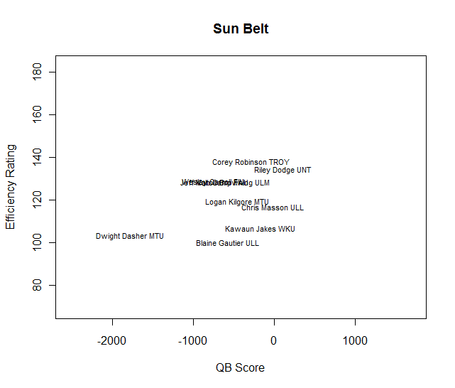 Last and certainly not least is Kellen Moore, the nation's most efficient QB no matter how you spin the numbers. Colin Kaepernick received a nice boost form the QB score for running wild on most of his opponents. 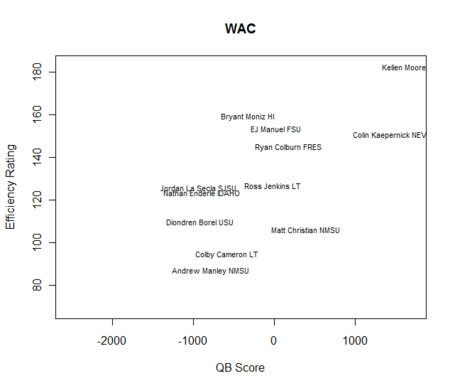 And there you have it, the QB Scores for 155 of the nation's quarterbacks. In many cases players had a decent efficiency rating paired with a sub-par QB Score. Rarer were those with a decent QB Score and a mediocre efficiency rating. Want to defend on rating and critique the other? Did your favorite QB do better or worse than you expected? Let us know in the comments.