Let me help you better understand something.  If the game starts at 7 PM and you order pizza at Jupiter's at 6 PM, you won't get your pizza until 6:40.  And I love scarfing down half a pizza in 8 minutes as much as the next guy, but then it runs the risk that you won't have time to go to Cinnaholic.  Who could pass up their expensive, but ridiculously delicious vegan Cinnabun dealies?  And yes, I realize that vegan Cinnabun dealies is the most Berkeley Berkeley to ever Berkeley.  Oh well!

The moral of this story is that time management was poor and I was unable to make it into Haas for warm ups.  Just as I got there, they were about to introduce the players for Cal. 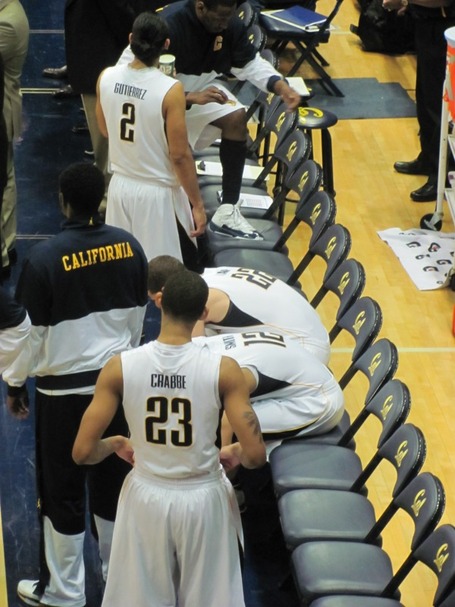 Excited to see Crabbe suited up and ready to go after last week's unfortunate concussion.  After the jump, let's takea  look at some first half game action in Cal's thrilling OT victory over those baby bruins.  GO BEARS! 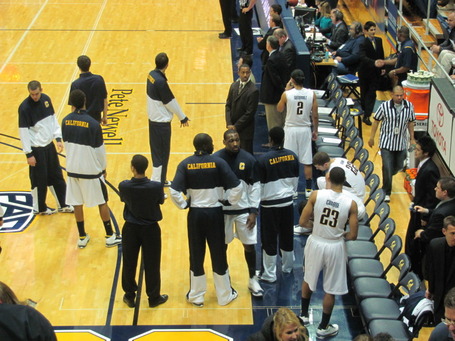 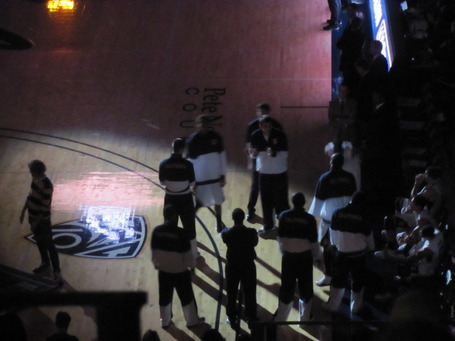 And just as I settled into my seat, Harper Kamp lept into the air! 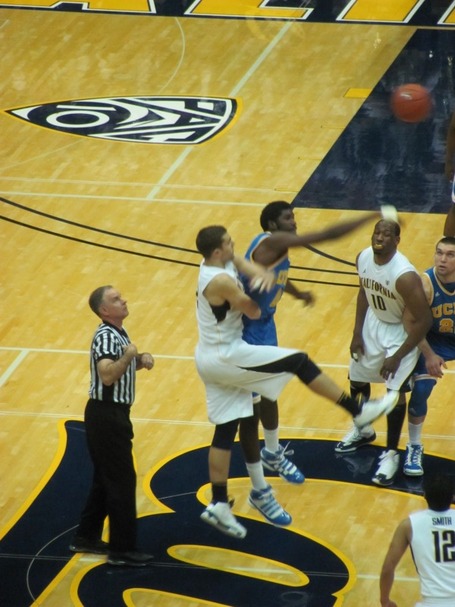 I can't be 100% certain of all this, because I was never in the student section at Cal (save for when they had the band in the middle of the student section well over a decade ago).  I feel like when I was there, every person had to wear their The Bench T-Shirt.  And if you didn't you might get booted.  If that was the case, then it is no longer the case at all.  These gentleman came shirtless in the football-style.

I wonder if people would rather have the uniform The Bench shirt style of yesteryear or are happier to see people allowed the creativity.  We have two separate spell outs, the dude in the banana and, of course, the guy who writes Bak Bak on his biceps. 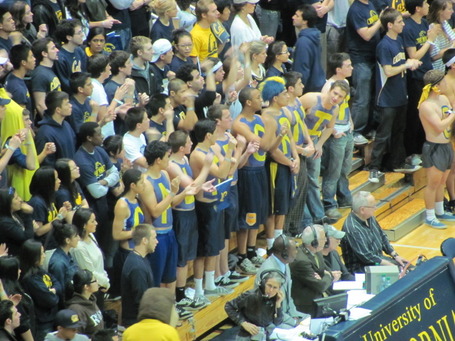 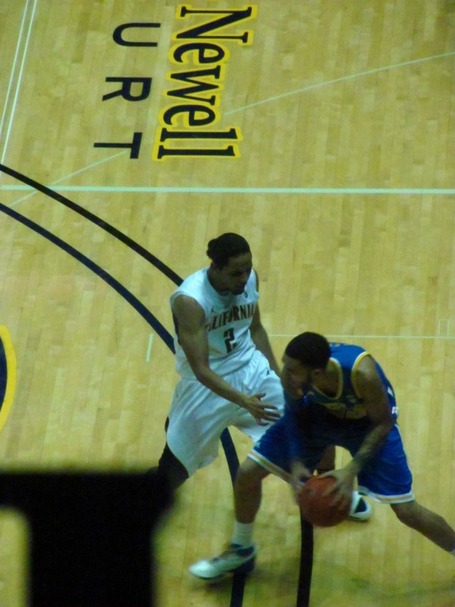 Jorge was all over everybody in this game.  Here, we see some solid D.  This photo was partially blocked by the edge of the railing.  Boo!!! 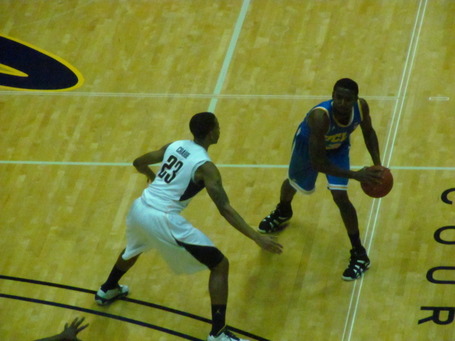 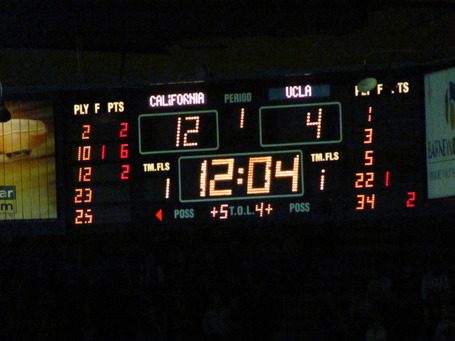 I had a sinking suspicion that a reeling Cal team would get blown out by a streaking UCLA team.  That was especially true if Crabbe couldn't play.  Fortunately, he did play.  And stunningly Cal jumped out to an early lead.  Notice 8 minutes have passed and Cal has only given up 4 points!  Great D.  Cal had some sloppy passing, mostly from Brandon Smith, but were doing much better than UCLA. 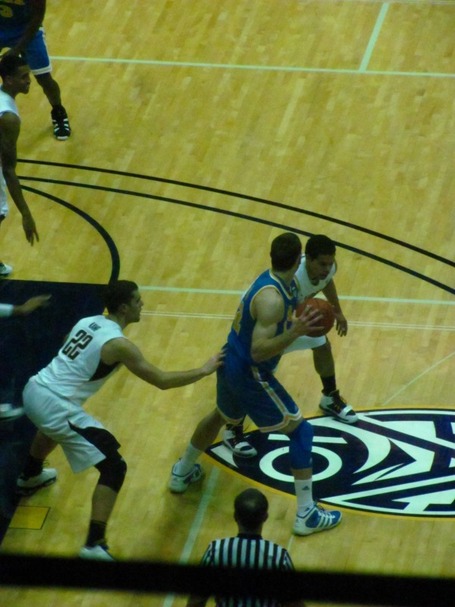 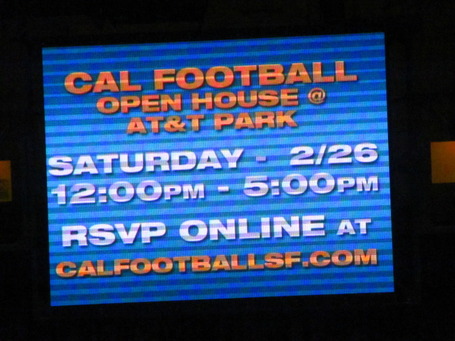 Who else is going? 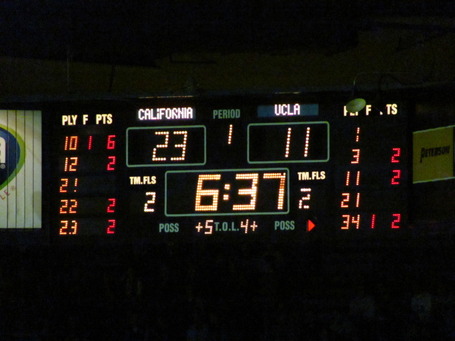 Here we are, well into the game and Cal was maintaining its lead.  UCLA was taking and missing a lot of 3s.  Some of them were not even that contested.  Whether Cal didn't have a lot of respect for the shooter or just was missing assignments on D is unclear to me.

Either way, I was happy to see so many missed 3s by UCLA.  Usually, it seems like Cal is the one making the mistakes and missing the shots.  However, I don't believe Cal could have played much better in the first.  I mean obviously, they could have played better, but how much more can you ask for? 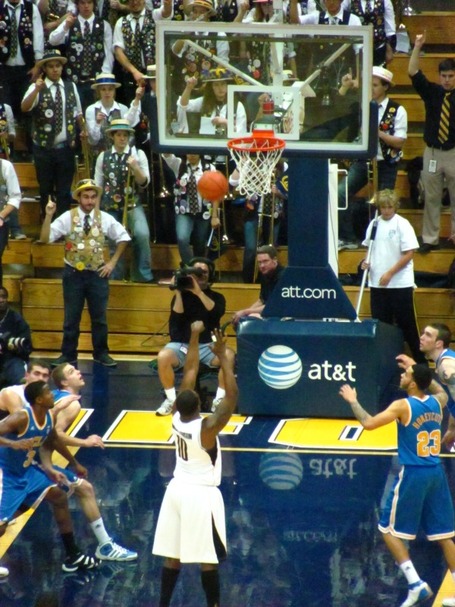 Of course, to be fair, MSF missed about 4 free throws in the game, so that was a weak spot right there. 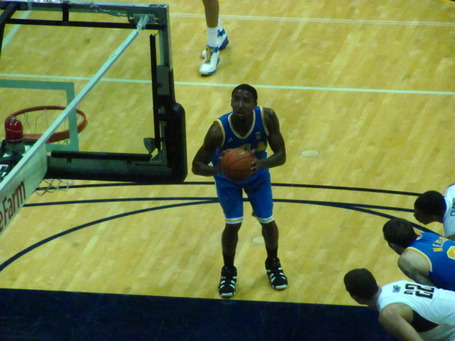 Here is Lee hitting his shots.  I think MSF missed more shots than the entire UCLA team.  Really, the only weak spot that I saw for Cal in the first half. 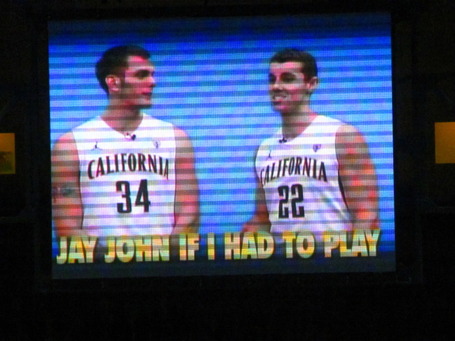 Here, the players were discussing which coach they'd like to take on one and one.  Harper Kamp wanted to take on Jay John!  I bet if I took on Jay John in basketball, he'd definitely beat me.  Although if I took on the exhumed corpse of Supreme Court Justice John Jay, I might have a shot.  Maybe.  Eh, who am I kidding?

During a time out, I noticed that the Cal coaching staff was huddling away from the players.  I wondered what they were discussing that they did not want to broach it with the players first.  Any thoughts? 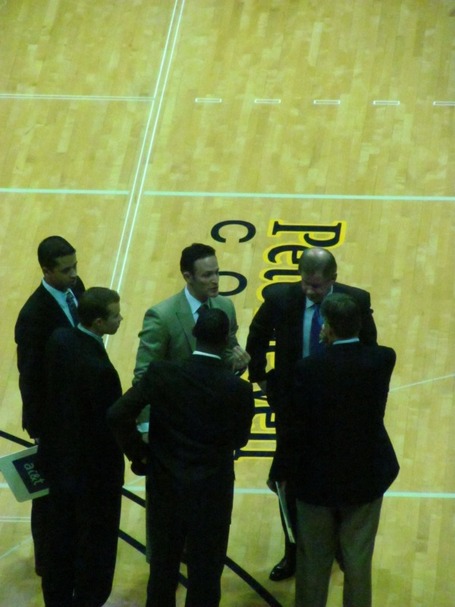 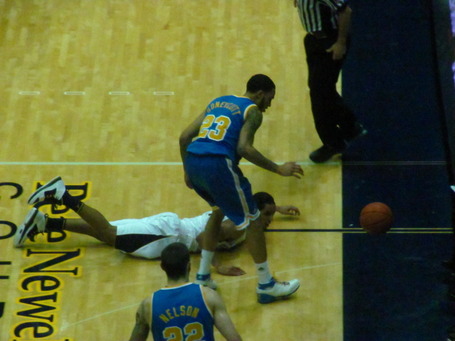 Jorge was absolutely killing it against UCLA.  A lot of stuff doesn't show up in the ledger, though.  Here, Jorge had great D to knock the ball out of bounds.  UCLA retained possession and may have scored on the possession, I cannot remember.  But Jorge has such fast hands.  He did made at least one great steal for a fast break that I remember off the top of my head (and saw on ESPN this morning!).  He was the complete player yesterday! 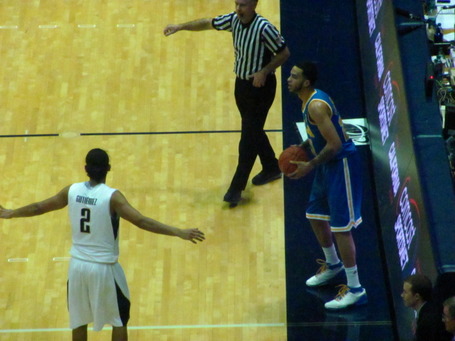 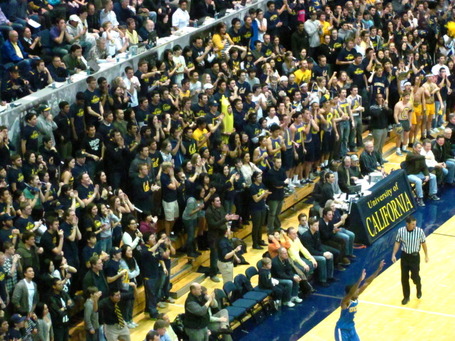 Student section was at about capacity.  That is OK, but it wasn't at complete and total bursting capacity.  I think things are trending the right direction, though.  After the frustration of the latter Braun years and the rise of football on campus, enthusiasm for basketball waned.  However, with the first Pac10 championship in half a century last year, it's coming back.  I'm excited for the future! 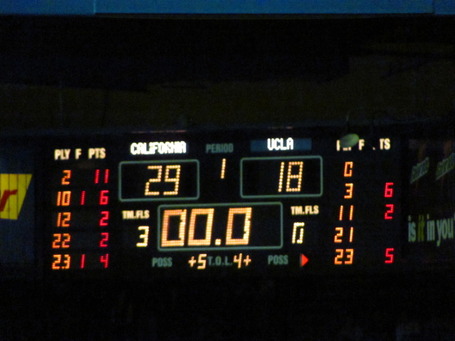 UCLA went on a mini-run (hitting some of those 3s) near the end of the half.  However, Cal had a solid burst right in the last minute or so to retake that double digit lead.  Cal had definitely outplayed UCLA in the first half.  Of course, this is a very tough UCLA team and so nobody was taking the second lightly.  As you'll see in Part II, UCLA played much better in the second half.

A few other notes:

1.  Howland comes WAY out onto the Court.  Even during game action.  Even during game action on his side of the court (which given the speed of the game is really irresponsible).  Lame!  I hate it when coaches do that on Pete Newell Court.  I think that UCLA was just insecure, because of how Newell totally dominated John Wooden back in the day.  Guess Sam Gilbert can't buy every win ever for those Bruins!

I thought the coaches should have teed Howland up for that, but oh well.

3.  When I was at the Arizona game, the Arizona fans would chant "U of A U of A."  We'd chant "USA USA USA" along with them, because we're totally super patriotic like that!  In retrospect, I realized that Arizona players would interpret our USA chants, in time with the U of A chants, to be inspirational to them.  Oy!

For example, here is Cal's Big C.  Notice that the music is staccato.  That means that the notes, in specific a repeating trumpet line, uses pinpoint precision with space in between the individual notes.

Here is UCLA's Sons Of Westwood.  It is about 90% Big C with a few other embellishments, mostly the ending.  Notice how the song is legato, which means that the notes are more connected and there is less space in between them.

So, what this meant is that when the Cal band would try to raise the spirits of the team/crowd with a rousing rendition of Big C, well, the UCLA fans (and presumably team) would cheer along.  UCLA also has a specific cheer they do after the end of Sons Of Westwood.  So, the Cal band would play Big C.  It would be great, as usual.  Then, the song would end.

BUT THE UCLA FANS WOULD KEEP GOING WITH THEIR CHANTS!  Triple Le Sigh.

I tried yelling out the "Eat My Shorts" thing that the band does, because I'm nothing if not trying to relive my glory days.  It was at that point that I realized how lame one person yelling "Eat My Shorts" truly is.

Also, a UCLA fan in front of me turned around and said that I reminded her of USC fans.  Fortunately for me, it appeared that her son was cheering for Cal the entire time!  Take that, random fan's mothering abilities!

As I am no big city lawyer, my seats were not near the court and so I was surrounded by UCLA fans.  My section was lousy with them!  And it meant that their fans sounded just as loud as Cal's fans to me.  Quadruple Le Sigh!