Interview With The Head Of The Axe Committee

Share All sharing options for: Interview With The Head Of The Axe Committee

Today, we have an exciting interview!  Thanks to the impressive Rolodex of Yes We Cannon, we have touched base with Melody, who was the head of Rally Committee in 2008.  Now, that is impressive in and of itself.  However, what is more important is that she was also the head of the Axe Committee for that year (as all heads of Rally Comm are).  We picked 2008, because we felt it interesting to see the perspective of receiving the Axe from Stanford.

Unfortunately, the year prior Stanford had defeated our beloved Golden Bears, so heading into the 2008 Big Game, Stanford had control of the Axe.  We get an interesting and inside angle here on management of the Axe and, in specific, management of the transfer.  Plus, if you've ever wondered why Cal doesn't handcuff itself to the Axe like those Trees to the South, you'll find out to the answer.  So, join me after the jump to read the answers to our hard hitting questions.  Many thanks to Melody not only for her service to Cal, but also for answer our questions.  Her answers are great!  GO BEARS!

1.  What is it like to receive the Axe from Stanford's Axe Comm?

I didn't know how badly I wanted it until I was standing on the sidelines staring at it. Hearing the buzzer and actually grasping the Axe back in my hands has been one of the most exhilarating feelings in my life, to date. It's like someone gave you the Christmas present you've been wishing for since you were a little kid in front of a stadium full of your close friends and jealous adversaries.

Yes, I was Director of Rallies at the time. I had been spoiled up till then. My freshman and sophomore years, we beat Stanford and there was no doubt in my mind that we would beat them again and again. Our Chair that year, Patrick Reilly, gathered his Axe Committee together right before we headed out into Stanford's field and told us, no matter what, if things didn't go our way, make sure not to cry because our faces would be the first ones the cameras would pan in on. I remember laughing in my head. I thought wow, now here's a diehard. Why would I ever cry over a football game and some trophy. It's just an axe nailed onto a piece of very heavy wood. Right? As our last few minutes dwindled, I felt an ebbing wave of anxiety take over me.
The realization of defeat had kicked in and I kept poking my head from out of the line to look at our Axe. We had formed a straight line at the sidelines of the 50 yard mark. I was the last in line, closest to the fans. I poked my head out to see the Axe one last time. Pat's predecessor, Aaron Villaroya, handed the Axe over to Pat [they had been holding it together]. The idea behind it is that year's Chair should be the last Cal person to have touched the Trophy. When the clock ran down to 1 second, Pat stepped forward and handed it to Guillermo Huerta, Stanford's Axe Committee Chair. I felt my heart sink into my stomach. As we walked back to the student section I felt like everything was caving in on me. The walk back from the 50 yard line to our student section was one of the longest walks I've ever had to take. To my left I could see downtrodden Cal fans, children crying, alumni yelling out in anger. Behind me I could hear cheers and cacophonous music being played by the world's most horrendous band. They had our Axe. They had OUR Axe. I wasn't going to cry. It was just a football game. To my right I saw Aaron trying to console Pat. We got to our silent student section and everyone stood up as our band played All Hail. That was it for me. I started balling and turned into one of my friends to hide my face. It was painful.
(TwistNHook Edit:  Now, I am crying!)

3.  How come you don't handcuff yourself to the Axe?

For the most part, it is a really dangerous thing to do. When you have the Axe on the field, at the end of game, thousands of people are rushing in on you. They push, they pull, they stampede. God forbid, you could get crushed underneath it. We also find pride in the fact that we can hold onto it without needing handcuffs. 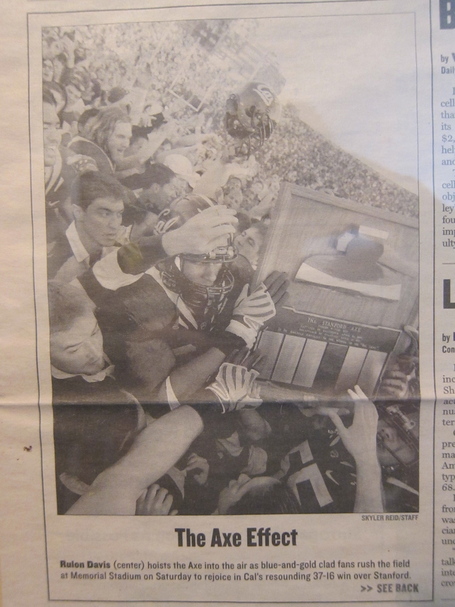 4.  Any interesting or funny stories from your time walking around with the Axe?

In 2007, Stanford hadn't held the Axe since 2002 when they handed it back over to us. They hadn't felt how heavy it was in 5 years. Let's say they forgot a little. When Pat handed the Axe over to Guillermo, there was a tight circle of people around them.The cameras, unfortunately, didn't get to see this wonderful slight of hand. Guillermo wasn't expecting the Axe to be so heavy, it's somewhere around 65 lbs. The Axe slipped straight through the Stanford Axe Chair's hands and if Pat hadn't fell to the ground so quickly and caught it, it would have fallen flat onto the field. How embarrassing!
During my Chairmanship in 2008, we had a lot more UCPD officers than normal. We had decided earlier in the year at a meeting we call "Joint Committee" that in the case of an exchange, I would step forward when the clock was down to 1 second and Guillermo [he was the Stanford Axe Chair again that year] would hand the Axe off to me. The idea is that at zero, my hands are on the Axe and his hands are off. I guess one of the UCPD officers misheard 1 second as 1 minute. It's a really touchy time as a Chair holding your Axe and knowing you're about to give it away to the other side. I felt for Guillermo. (TwistNHook Edit:  I don't!)

The clock went down to 1 minute and the UCPD officer that was placed right behind me pushed me forward to take the Axe. I wasn't expecting to be pushed so I basically almost fell on top of the Stanford Axe Committee and to catch myself from falling straight onto Guillermo, I grabbed the Axe to stop my fall. The look on Guillermo's face was priceless. Officially, I want to say, again, I'm sorry Guillermo for startling you so. He pulled away from me with the Axe and under his teeth growled, "It's not yours, yet!!!" I humbly stepped back and waited his deserved few seconds until he begrudgingly handed it over to me.

5.  When you don't have the Axe, as you didn't in 2008, what do you during the game?  Did the fact that that game turned into a blowout in the 2nd half change your responsibilities?

The only difference is that we're not on the field the whole game. We come out for the coin toss and face Stanford's Axe Committee for the dramatics of it. The rivalry, is, after all, very theatrical. Then we go back to our seats and tend to our normal Game Day Rally Committee duties: card stunts, waving the Cal flags, protecting the California banner, shooting the Cal Victory Cannon, etc. Then at the 5 minute mark we walk our way down to the sidelines at the 50 yard line on the West side of the stadium. Our responsibilities didn't change because of the blowout, our excitement did though.


6.  How does one get onto this particular Axe committee?

Axe Committee is chosen from members of the Committee whom the Chair trusts and thinks deserves the honor. Usually, the selection is made from Senior and Executive Committee members. But, very often members of the general committee are chosen and they can range from freshmen to seniors. It's all about who the Chair knows they can trust in a very tough moment.


7.  What are your various Big Game Week responsibilities when on the Axe committee?

You accompany the Chair to various events the Axe attends during the week and your main responsibility is to protect the trophy.


8.  What are the immediate post Big Game activities for the AxeComm people when we have the Axe?

The Monday after Big Game [if we have won], we have a Axe Rally where we parade around campus and into classes with the Stanford Axe.


9.  What are the various responsibilities of the Rally Comm Chair?

The most fun thing I got to do as Chair was be Custodian of the Axe. It was the most tedious thing, as well. It was an experience that I will never forget. It is a once in a life time opportunity for a student to have the honor and privilege to run such an amazing Committee. Being custodian of the Stanford Axe was one of the most memorable times in my student career, not only for the fantastically amazing things I got to experience with the duty, but the torturously exhausting things that came with protecting it, as well.