Avinash: In case you didn't know, Aaron Rodgers is less than a week away from competing in football's greatest game in Super Bowl XLV.  It seems like the perfect time to reminisce about Aaron's time as a Golden Bear.

What are some of your favorite moments and performances by Aaron? Is there a particular play or characteristic that really separated him from the other quarterbacks you've watched as a Golden Bear?

HydroTech: I know what TwistNHook is going to say: his stunning good looks.

solarise:  When Aaron called out Todd McShay to do film studies. It was a punch in the face 5 years later.

Aaron may forgive, but he never forgets. 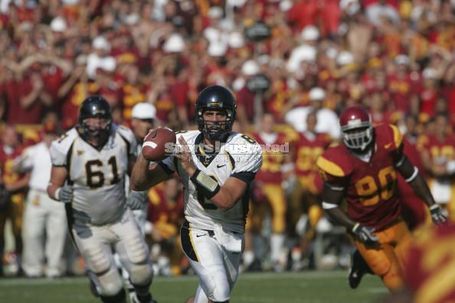 No matter what Aaron does in his NFL career, for Cal fans it might be hard to top 23 consecutive completions with a national championship berth on the line.

Ohio Bear:  Besides 23 consecutive completions, I have many fond memories. Among them:

1. My first true "wow" memories were from the Utah game in 2003, a Thursday night ESPN game. (Utah's QB that night was Alex Smith, BTW.) To that point, Rodgers had been sharing time with Reggie Robertson. Rodgers didn't even play a snap the previous game vs. Colorado State, which seemed strange at the time. Rodgers entered the game with Cal already down 14-0 and sputtering on offense. He proceeded to dazzle Lee Corso and Kirk Herbstreit with his accurate throws on the move. He impressed me, too -- we got back in the game and almost won it. From that point, I figured Rodgers was our starter. And he was.

2. At Illinois 2003 (at which CALumbus Bear and yours truly were in attendance). 1st quarter, Illinois had just scored a TD to go up 7-0. We had a 3rd and 20 in our own territory. Rodgers found Geoff MacArthur for about a 30 yard gain to get the 1st down. Not only as it a key conversion when Illinois was seizing momentum in the game, but Rodgers made it look so effortless. Quick release, BOOM -- a pass on a rope to G-Mac. We later scored on the drive. The Illinois game was where my man crush on Rodgers truly began.

3. USC 2003 (The Upset) -- Yes, Rodgers left the game in the 3d quarter and Reggie came in to finish the job. But Rodgers first half performance was incredible to me. So poised, so unintimidated by SC's great defense.

4. @ UCLA 2003 -- Not a particularly great game from Rodgers, but boy did he come through on the final play of regulation. 33 yard TD pass to Burl Toler with Cal needing a TD and 2-point conversion to tie. Just an absolutely money play from Rodgers (and Toler). We made the 2-point conversion, but, alas, lost in OT. So, okay, that game was quintessential Cal. But Rodgers throwing that TD on the final play of regulation was so un-Cal like.

6. Insight Bowl 2003 -- Rodgers was unstoppable, really. Mark Malone and Mike Golic on the ESPN broadcast were impressed. And so was I.

7. The entire 2004 season, really is a fond memory. Our offense was so good and Aaron Rodgers was the driver. Rodgers was just friggin' good. Particularly memorable plays for me, mostly for the greatness of the throws: TD pass to Garrett Cross in the Ucla game (how did he lay that ball in there like THAT?); TD pass to Craig Stevens in the Oregon game (same question); GW TD pass to MacArthur in the Oregon game (threw it high like he had to; G-Mac went and got it); TD pass to RoJo in the Big Game (great throw by Rodgers, into a small window; great play by RoJo to hang on despite being hit).

8. Calling out Mack Brown. Maybe not his classiest moment, but Mack wasn't classy either. And it showed me how much Aaron Rodgers was a true Bear.

The only thing that stood between Aaron Rodgers and Pasadena was a crooked USC team and a whiny Mack Brown.

Kodiak: My favorite memory was the Insight Bowl onslaught.

He was like a shark with a frickin' laser for an arm.  Deadly accurate and absolutely clutch.

yellow fever: My favorite was wondering why the heck he was on the sidelines as Reggie Robertson beat USC in 2003.

LeonPowe: Didn't he get his bell rung pretty badly in that game?

Mine was being in the BoB while he put up 52 points on Beamer Ball. I went back and read some VTech open thread for that game - and they were becoming really really pissed off because he was smiling the entire 4th quarter while in a neck and neck battle.  We couldn't  stop their offense and they couldn't stop ours.

yellow fever: Actually, I think it he was pulled for ineffectiveness since he had thrown two interceptions in the first half or something, it just wasn't clear from the stands why it was done.

norcalnick: What I recall is that he hurt his finger, and that changed his throwing motion, causing the 2 picks.

Ohio Bear: To the research!

Here's what Coach Tedford said about it after the game:

On Aaron Rodgers: "Aaron (Rodgers) was banged up a little bit. Coming out at halftime, I didn't see it in his eyes that he felt good. I asked him 'What's wrong?' and he said 'I'm really banged up.' I said 'You tell me when you feel like you can't get it done.' After the interception for the touchdown, I went over to him and said 'Do you want to take a couple of series off?' and he said 'Yes.' We put Reggie (Robertson) in and Reggie did a nice job for us."

"(Aaron) will be fine. It was one of those games for a young 19 year old kid. When you play USC, you get battered around pretty good. I know he's disappointed not to be able to finish the football game. But he'll be back; he's our starting quarterback."

"He wasn't himself. He was limping around. I think he felt like he couldn't perform to his ability given his condition. Reggie's done a great job for us. There's not a lot of slack when Reggie comes in for us. We have tremendous confidence in Reggie."

Avinash:  One thing I noticed was how GOOD Rodgers was when moving out of the pocket. He never took off with his legs the way he does with the NFL, but his passes on the run were some of the best I've ever seen in the college level. Riley's a mobile quarterback, but when he left the pocket it didn't seem like his accuracy improved by much.

Rodgers, by contrast, was a sniper. He was pinpoint in his precision in finding all sorts of guys when he scrambled out of the pocket, even throwing back across his body with shocking accuracy. He does the same things he did in college in the pros. What a talent.

TwistNHook: Unfortunately, the two definitive Rodgers plays that jump out of my mind are not positive:

1.  4th down against USC
2.  The throw in the HBowl where a young Robert Jordan volleyball set it up into the air.  I don't know why that one sticks out to me, but it does.

Avinash: It's interesting that you would mark out the mistakes that Rodgers made rather than all the great plays he converted. Perhaps it's because those darker moments stick out because they were so rare.

And it's hard even to call the two plays you mentioned mistakes by Rodgers: Jordan tipped the ball up and Makonnen tripped himself up. Aaron's general method of screwing up involved him throwing an incompletion, since his interception rate is the lowest in Cal football history. His folly has been (to this point in his career) fairly tame.

Hopefully it can stay that way for one more game.