In this film study post, I want to go over Oregon's second touchdown from the 2011 Cal vs. Oregon game. I want to break down this touchdown because I think this play is significant. Why is this play significant? I think it -- once again -- demonstrates the mental chess match going on between an offensive mastermind and a defensive coordinator. 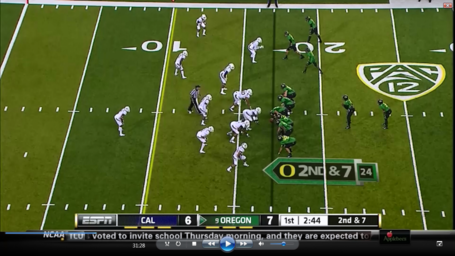 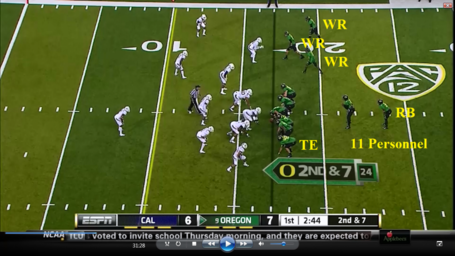 Oregon comes out onto the field in 11 personnel (3 WRs, 1 TE, 1 RB). They're showing a pistol look, with the QB in shotgun and the RB behind the QB. The WRs are in a trips formation to the offense's right. The TE is to the offense's left. 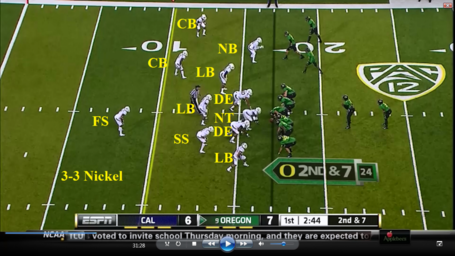 Cal defends with its 3-3 nickel defense. They have 3 defensive linemen, 3 linebackers, and 5 defensive backs. Can anyone guess what defense Cal is playing? 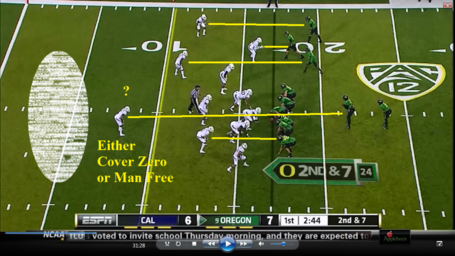 In the picture above, I wrote that Cal's defense was "either Cover Zero or Man Free." First of all, I suppose I should explain what those defenses are. Cover Zero is a defense where no defender plays deep coverage. Every defender on the field has an assignment. Cal played this defense almost exclusively against Oregon in 2010 because it is a great defense (perhaps even the perfect defense) to counter Oregon's option attack. Man Free is another name for the Cover One defense. This defense puts one lone defender in a deep zone; hence the "one" in Cover One. The "man" in Man Free means that the defensive backs (other than the one lone deep defender in zone) are in man coverage.

I wrote that Cal is in "either Cover Zero or Man Free" because the defensive playcall is determined by what the offensive play is. If the offense runs the ball, then the FS aggressively approaches the line of scrimmage to defend the QB on the run -- hence it's a Cover Zero. Alternatively, if the offense play is a pass play, then the FS will drop back into coverage to help defend against the pass -- hence it's a Man Free. As you can see, this places a lot of responsibility on the FS to correctly diagnose the offensive play quickly to determine whether he should attack the line of scrimmage if it's a run, or drop back into coverage if it's a pass. 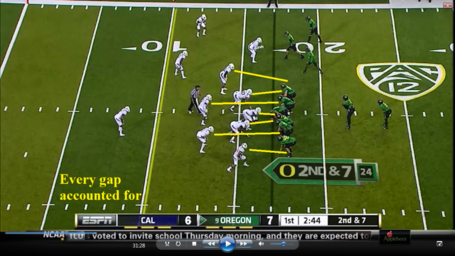 Another important aspect of playing Cover Zero against Oregon is maintaining "gap integrity" or "gap control" -- whatever you would like to call it. I like "gap integrity" personally. But what does this mean? What is a gap? A "gap" is the space between or outside an offensive blocker. Thus, since Oregon has six blockers on the offensive line (1 TE and 5 OL) on this play, there are seven gaps. Please see my little illustration below.

How many defenders does Cal need to fill every gap to prevent the RB from running up a gap? If you guessed seven, you're right!

How many defenders does Cal have playing the run in the picture above? If you guessed seven, you're right. Who are those seven defenders? They are the three Defensive Linemen, the three Linebackers, and the Strong Safety playing next to the linebackers essentially as a fourth linebacker.

In the picture above, I've drawn the gap assignments for these seven Cal defenders if this Oregon play is a run play. As you can see, every gap is accounted for and Cal would *theoretically* be in a great position to stop a run.

This is "assignment football." This is a Cover Zero defense. This is man on man football. This is seven defenders vs. seven offensive dudes.

Remember, the QB is being covered by the FS. That's why the QB isn't in the above equation. Here's the other part of the equation. 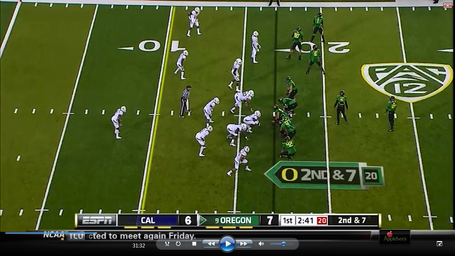 So let's finally get to the play itself! What is it? Even the Oregon players don't know! They only scored 800 on the SATs! On all three subjects! I'm kidding. 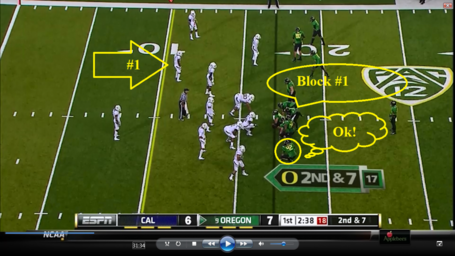 So Oregon must be calling a play to beat the Cover Zero! Hmm... I wonder what play that might be? We're about to find out!

The Oregon QB gets the playcall from the sidelines and spreads the word. The word is that this play is ... well, we've all seen the game so we know it's a REVERSE.

But here's the key. The Oregon QB, aside from telling the offense in super duper secret lingo that the play is a reverse, is also telling the Oregon TE to block Cal Defender #1.

Why is this significant??? We'll see in a moment. 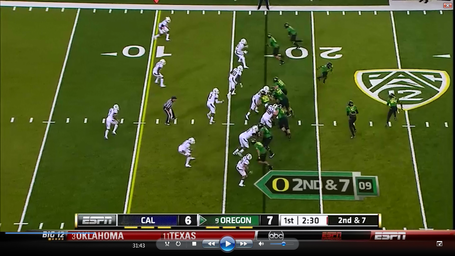 So here's the post-snap picture. The Oregon QB and RB run to their right. 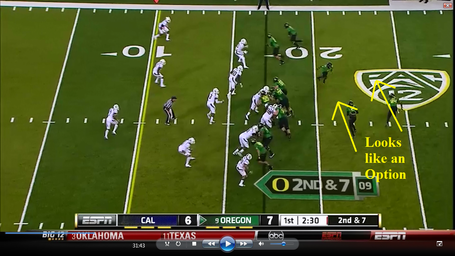 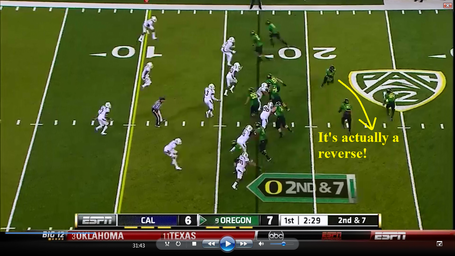 But that slot WR is running back across the flow -- and to the QB! It's a reverse! 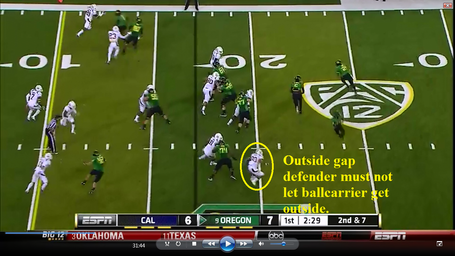 Remember who has responsibility for that outside edge if the play is a run play? (If you need help, go look at the fifth picture in this post to see the gap assignments.)

Who is this player? It is Cal's strong side outside linebacker. In this case, it's Kendricks (Cal LB #30). 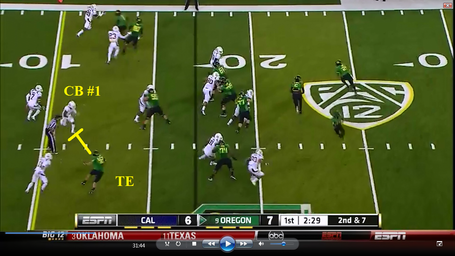 But wait. What else is going on in this play? Remember that Oregon TE? Remember what's significant about that guy? The Oregon QB was telling the TE in the Oregon super secret lingo to block the Cal defender wearing #1 (Cal CB #1 is Steve Williams). And that is what the Oregon TE is doing!

Why is this significant???

And here's where if you truly read my post about last year's game, and you understood the concept I broke down in that analysis post, you say... 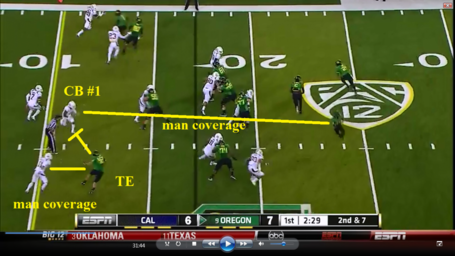 IT'S BECAUSE CAL DEFENDER #1 IS THE GUY PLAYING MAN COVERAGE ON THE BALL CARRIER! If the TE blocks Cal Defender #1 (Cornerback S. Williams), then nobody is covering the ball carrier!

It's so important I'll say it again!

IT'S BECAUSE CAL DEFENDER #1 IS THE GUY PLAYING MAN COVERAGE ON THE BALL CARRIER! If the TE blocks Cal Defender #1 (Cornerback S. Williams), then nobody is covering the ball carrier!

I suppose some of you might point out that it looks like Kendricks (Cal LB #30) is covering the ball carrier from his outside gap spot on the 20 yard line between the hashes, and thus somebody other than Cal Defender #1 is in fact covering the ballcarrier. It looks like it. But technically, his responsibility is to play the Oregon RB. And I know I just said a few pictures earlier that it's his responsibility to play outside containment. Let me explain and clarify.

Kendricks' responsibility is to cover that outside gap on run plays where the QB hands off the ball to the RB, such as a zone read. Remember that gap integrity stuff I talked about earlier? I've reprinted it below:

So in this particular play, it's not really Kendricks' responsibility to pursue the ballcarrier (the slot WR who took the ball on the reverse). Oregon was expecting him to bite hard on the run option to the offense's right and take himself out of the play to defend the reverse -- but unfortunately for them he didn't and he is actually in position to stop this play.

Some of you may also remember that Cal SS #11 (Cattouse) was playing in the box in man coverage against the TE. You may be wondering how come he's not in a position to stop the ballcarrier. Cattouse is not in a position to stop the ball carrier because he's covering the Oregon TE in man coverage. Remember, Cover Zero is a man based defense where everyone has a responsibility. Everyone has to STICK WITH THEIR ASSIGNMENT. Everyone must NOT BREAK OFF THEIR ASSIGNMENT. And everyone must TRUST THEIR OTHER TEAMMATES TO HANDLE THEIR ASSIGNMENTS.

(Kendricks is in a position to stop this play because he sort of broke off of his assignment on the RB. So he did sort of break the rules. But he did so intelligently because he saw that the play was a reverse.) 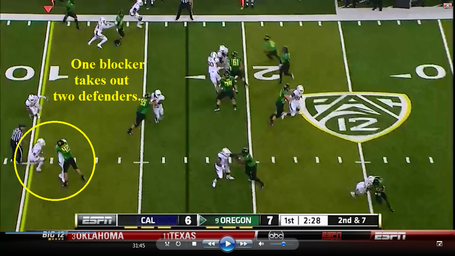 Since Cattouse is covering the TE, and the TE also blocks Williams (Cal Defender #1), that TE is essentially taking out two defenders! Does this sound familiar??? It should! It's the same concept that I showed you in my film study post from last year's game!

In an ideal Cover Zero defense on this play, we would have:

But instead we have: 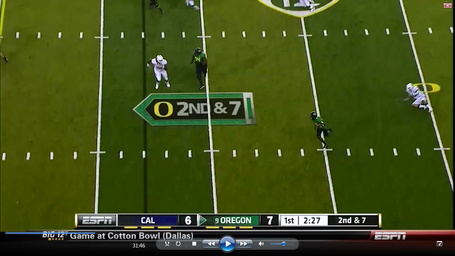 And how does this play end?

Despite the fact that Kendricks came off his assignment to stop the reverse, he missed the tackle. Being that he's the OUTER MOST defender with OUTSIDE CONTAINMENT RESPONSIBILITIES, and he let the ballcarrier get outside of him, and because Oregon blocked Williams (the Cal defender with the responsibility of covering the slot WR on the reverse), the Oregon slot WR runs the ball in for a touchdown.

This play, in its entirety, can be seen in the youtube video below (preset to start at the correct time):

After last year's narrow 15-13 Oregon victory, one of the big questions going into this year's game was whether Oregon head coach Chip Kelly and Cal Defensive Coordinator Clancy Pendergast would change much of anything from their gameplans last year.

Nah, not really. For the most part, both teams were doing the same ol' same ol'. And I've just shown you that same ol' same ol' stuff. The only difference between this play, and play I broke down in last year's game, is merely the formation, and the way the ball was delivered to the ball carrier. But essentially, they are utilizing the same concept: When the defense plays Cover Zero, use a tight end to block the defender who has the responsibility of covering the ball carrier.

Pendergast utilized pretty much the same gameplan as last year, and Chip Kelly had planned out some plays (such as this one) in response to Cal utilizing the same Cover Zero gameplan. Looks like Kelly wins this chessmatch again.

Special thanks to TouchedTheAxeIn82, and everyone else who helps create/seed torrents. Without your help, I couldn't do film study posts like these for everyone to read.