Unfortunately for all of you, I'm filling in for Hydro for this final installment Post-Game Thoughts for the 2011 Cal football season. As a result, this will be devoid of any real in-depth analysis or unique insight. Rather, I'll be highlighting the points that were abundantly clear as we all watched the Texas defense go all Terrible Terry Tate on Zach Maynard and Co. Apologies in advance.

Despite the result and the way in which it unfolded, I found things really weren't all bad. Well, at least one thing wasn't...

They battled like hell, despite Cal's offense offering them little respite. Stats don't lie. Texas converted just 3 of their 14 3rd downs. Texas had 255 total yards, 146 through the air and 109 on the ground (3.1 yards per carry). The bulk of that rush yardage happened on three plays, the biggest one when it looked like we were gonna tackle speedster Marquise Goodwin for a five yard loss. We didn't, and he busted it for 37 yards to set up Texas' last touchdown. A 19 yard scamper by freshman running back Malcolm Brown and a 15 yarder from Jeremy Hills on a pitch where Dave Wilkerson bit badly on an inside fake represented Texas next two longest runs. That's 71 yards out of the 109 surrendered. Similarly through the air, there were the two big plays that padded the Texas numbers significantly. the 30 yard throw to TE Blaine Irby where nobody bothered to cover him and the 47 yard TD bomb to Goodwin where Marc Anthony got flat-out burned. 107 yards out of 146 right there. If those execution errors are eliminated, this effort looks that much better. But we can't go back and undo what was done. Still, I was really proud of the effort. Kendricks had a fine game. Aaron Tipoti absolutely abused Texas' young center. Sad that it wasn't enough.

2. The Texas Defense is better.

Why wasn't it enough? Because Texas' defense was even better. Like, ridiculously better. I knew they would be tough, but damn. They forced 5 turnovers (more on that shortly), sacked Maynard 6 times, recorded 13 tackles for loss, and just generally suffocated the Cal offense. Repeatedly. The byproduct of steady and sustained great recruiting along with a brilliant young defensive coordinator were on full display last night. Talented safety (but real-life jerkoff) Kenny Vaccaro hurdling Isi Sofele to sack Maynard is an image that we will see for the rest of Bowl Season on ESPN. DE Jackson Jeffcoat was too fast for our OL and TE's to handle. Repeatedly. The secondary refused to give up many big plays, keeping Keenan and Marvin in front of them all night. Our running game sputtered between the tackles because a heavy rotation of 8 DL were absolutely crushing our offensive line. As a result, Cal was continually facing 2nd and long (then 3rd and long) situations. Not a recipe for success. The blitzers came fast and frequently from the secondary and the linebackers. If we weren't the team getting our asses handed to us, I might have even enjoyed watching that display. It would have taken an offense as good as Baylor or Okie State to have had a chance against this unit. We're not there.

When you're -5 in turnover margin, it's hard to win. The fact that we only lost by 11 is a testament to the defensive effort (and Texas' offense just not being all that good). But...wow. The first turnover was a Maynard armpunt the likes of which we haven't seen since the UCLA game. He made several other extremely ill-advised throws, but thankfully they all fell to the ground because too many Texas defenders were squabbling over who got to catch it. The second turnover was just a pure execution failure when Zach and CJ Anderson got tangled up on a zone read. The ball fell to the ground, and Texas got it. The third was on Isi. Just as it looked like he might be able to bump a run outside, one of the Texas DT's popped a hand on the ball. Isi, as he has repeatedly done this year, was holdly it too loosely. Out it came. You know what? I don't much feel like re-capping each turnover. That's no fun, and I'm just getting pissed off now. Let me just say that this was an opportunistic defense, and we gave them opportunities. The first two were the most egregious and fault lies with the Cal guys, the last three were plays made by the Texas defense. There could have been more. On the flipside, I was disappointed that our defense couldn't force any turnovers. My only real beef with the defensive effort. 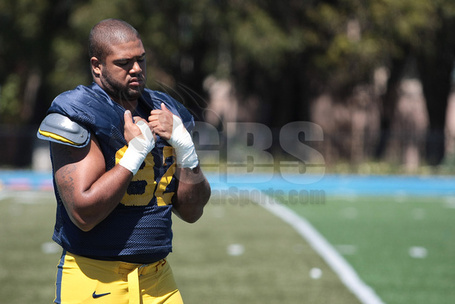 Understatement. They got abused. I thought this could happen, but I foolishly hoped it wouldn't. It bothers me that much blame has been heaped on Maynard, when there's very few (if any?) quarterbacks that could have done anything facing the kind of pressure he did. Galas got worked inside by the Texas interior DL, and once again had a couple awful shotgun snaps. Long time till spring ball, Dom. Let's work on that. MSG had his hands full and looked completely outmatched...because he was. Would love to see him get a chance to move back to guard. But then who gets thrown to the Wolves at tackle? Miller had one catch and an incredibly stupid personal foul that was immediately followed by a sack/fumble on Maynard. Hagen didn't record a catch and had a holding call that negated a nice little catch and run by Marvin. We were outclassed here. I'm a big believer in Coach M, and I think we'll get to a place where OL play can once again be a real team strength. But we're not there yet. MAAAARRRRSHAAALLLL!!!!

Yeah, I think so. I've already covered the Texas defensive effort and scheme. But I think our playcalling was pretty poor. I'm no armchair coach. I don't have a lot of answers as to what I would have done differently. But I trust my eyes. Manny Diaz (the Texas DC) had a good gameplan for our offense. And he blew us the hell up. How much of that can be attributed to better talent, which Texas clearly possessed? I don't know. Probably a lot. But it sure appeared that Texas had an answer for everything we tried on offense.

As for defense, I think this would have looked worse if Texas had a better offense. They still found ways to make plays when they needed to, despite being so clearly limited by a poor OL, a young QB, and injuries at RB. We did a nice job taking away the power running game, but then looked totally out of sorts when Texas went to the air on a couple long passes. I almost crapped my pants when Anthony got beat on the long pass play after Texas had a third and long at their own one-yard line. We were fortunate that Goodwin stepped out of bounds. This happened twice if I remember correctly. In fact, we got lucky a few times on similar plays. 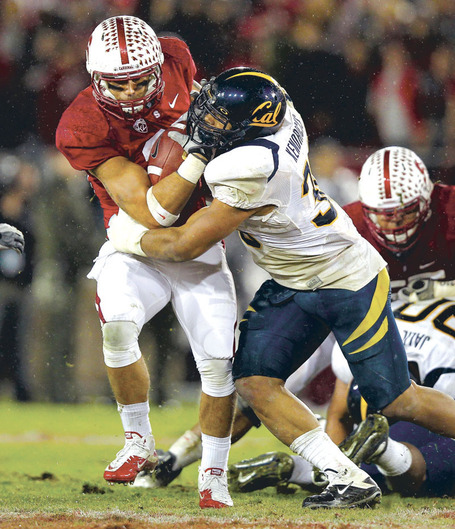 6. Goodbye to our Seniors.

I need to get away from my crappy analysis to finish this off *turns off Angry Bear mode*. We're saying goodbye to a good group of guys. I only wish we could have sent them out on top. Despite all the redundant criticisms that have been leveled at this team, the effort given on Wednesday night cannot be doubted. They gave it everything, and we shouldn't ask any more of our players than that. Marvin Jones fumbling the last time he'd touch the ball as a California Golden Bear broke my damn heart. For all he's given the school and the program, he deserved better. John Breech got a great pic of Tedford and Marvin after the game. Maybe I'm a bit of a softie (okay, I definitely am), but I think its pretty awesome. I'm not going to go through and name every departing senior, but the void they leave will be huge, and they all deserved better. That void will be more tangible for some (Kendricks and Holt for instance), but every guy deserves our respect. I hope we can all take a minute to appreciate this group and what they've given to Cal Football during their time. I know I'll miss them.

I warned you guys this wouldn't be up to snuff. So there. Again, apologies for that and for not really being capable of generating a product of Hydro-level quality. I'm still a little raw over the game and the sad realization that we won't have any more Cal football until Spring (yeah, that counts too!).

I'd love for everyone to add their own feelings and comments below. It would be a great way to compensate for me not doing as much. Go Bears!