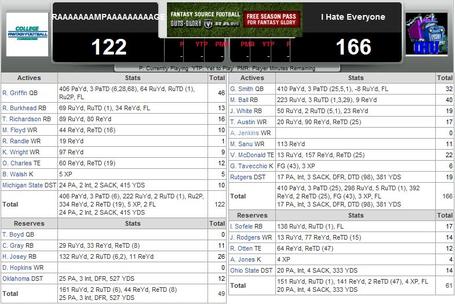 MONTEE BALL!!!!!! Also, V. McDonald too. Thanks, buddy. I really like what Geno Smith and Montee did for me, and honestly I'm a little surprised at how well Rutgers' defense has been playing. Picked up even more points than THE Ohio State University defense has. Robert Griffin rolled up 46 points, but RAAAAMPAGE just couldn't match up otherwise. 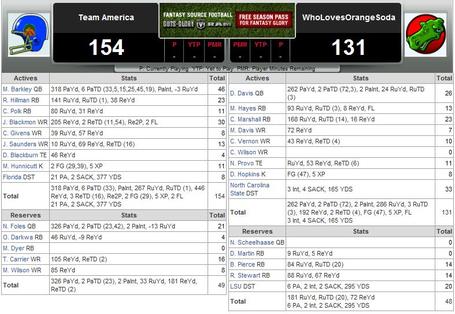 Team America rode Matt Barkley and his 46 points to get past WhoLovesOrangeSoda by a count of 154-131. Justin Blackmon chipped in 30 points to help out, while Orange Soda picked up 33 points from the NC State defense...and not much else. 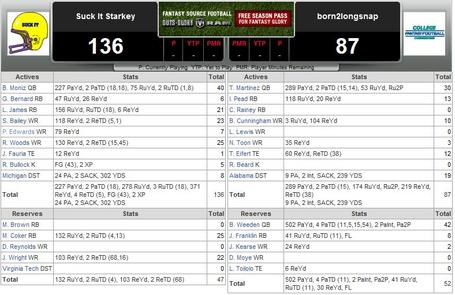 Suck it Starkey cruised by born2longsnap 136-87 on the strength of its passing game, with Bryant Moniz, Robert Woods, and Stedman Bailey going off for 88 points. Which was one more than born2longsnap's entire team mustered. Taylor Martinez did his part, but he was handicapped by getting three big fat zeroes from other roster spots. 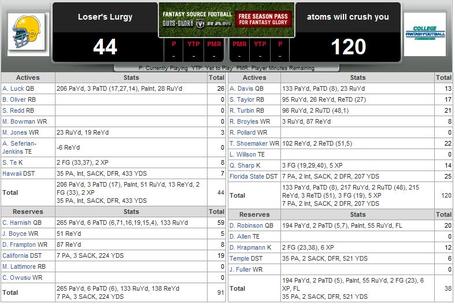 Loser's Lurgy continues to lurge along, falling by the awful score of 120-44. Yeah. Andrew Luck put up 26 points, but it goes without saying he didn't get much help at all otherwise. 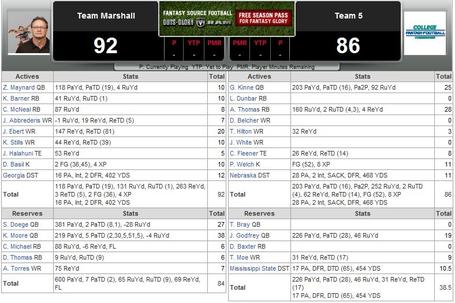 The week's closest matchup went to Team Marshall, in beating Team 5 92-86. And really, any team that is willing to start Zack Maynard over Kellen Moore really deserves to win, don't you think? 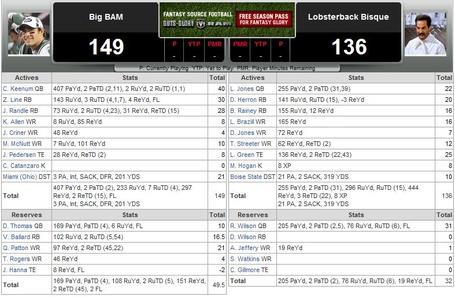 Big BAM dealt Lobsterback Bisque its second straight loss, 149-136, behind the continuing-to-set-records Case Keenum and yeoman's efforts from Zach Line and Joseph Randle. Lobsterback Bisque got strong, decent efforts from the majority of its roster, but didn't have a single player go over 25 points...aside from its backup QB, Russell Wilson.