Cal Football: A Golden Spotlight on the Run Game Against the WSU Cougars

Share All sharing options for: Cal Football: A Golden Spotlight on the Run Game Against the WSU Cougars

The Cal Oline had to be feeling pretty good about themselves this weekend.  318 total rushing yards isn't too shabby, even if it's put up against the movable object which is the Wazzu defense.  (And yes, that is my pre-pictorial conclusion.)

It's 2nd and goal.  Cal just tried to run a sweep to the right and Sofele was tackled right at the goal line.  Cal sets up with their 23 short yardage package featuring 2 backs and three tight ends. (Miller, Ladner, Wark)  WSU is in their goal line defense with a trio of defenders shaded towards Cal's strong side.  Ladner goes in motion towards the left... 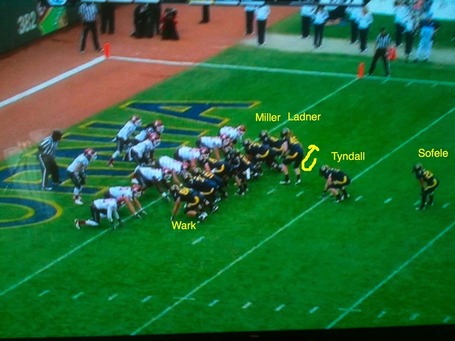 ...The WSU defenders don't move.  Ladner re-sets in his original position setting up a strong formation to the right.  WSU keeps their stacked trio of defenders shaded to match Cal's formation right. 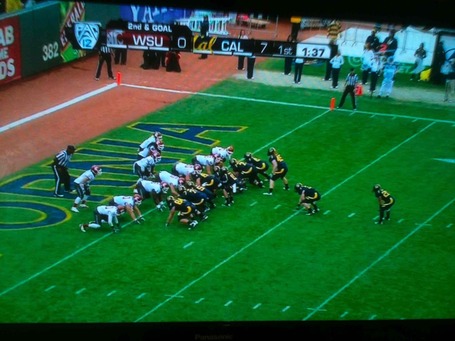 At the snap, Ladner and Tyndall charge forward while the line powers straight ahead.  Sofele pauses in place. 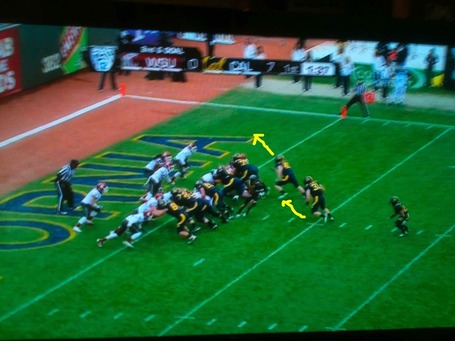 Maynard looks to hand it off to Tyndall on the quick hitter.  Ladner helps Miller seal the edge.  The Cougar defenders sell out to stop Tyndall, including their unblocked backside edge rusher who crashes down the line towards our fullback.  Meanwhile, Sofele starts to drift laterally. 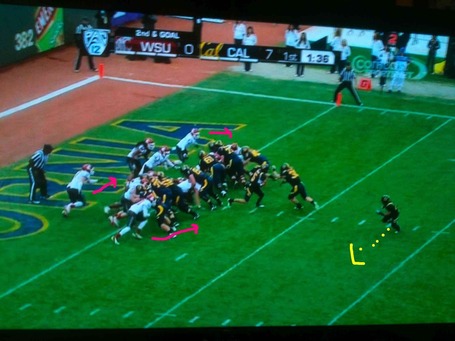 It's a fake!  Maynard flips the ball outside to Sofele.  (This is one of my favorite plays from the early Tedford era.  We haven't used it the past few seasons, so what better time to dust it off than against the mighty Cougars!) 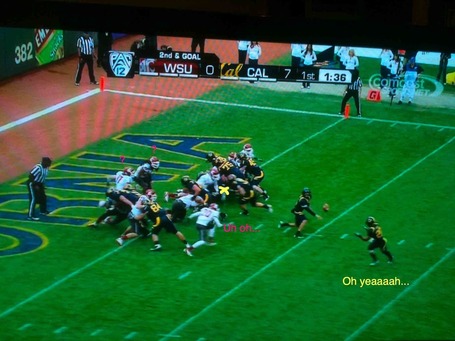 Sofele goes into the endzone untouched.  Although the playcall caught WSU offguard, and the play itself was well-executed, the Cal blockers really showed off their dominance here.  Wark and Ladner still have the edges sealed.  Schwartz and Gates beast-mode their guys and drive them several yards deep into the endzone.  And, Tyndall runs over their gap defender - he would have scored had this been an actual fullback dive.  (Spoiler alert?) Touchdown Bears! 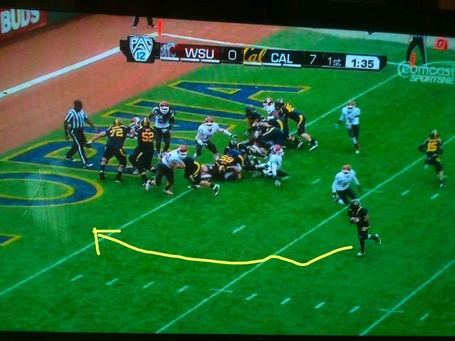 It's 4th and 1 from the Cougar 42 yard line.  Clinging to a slim 23-point lead, Tedford dials up the crazy and decides to go for it.  Did anyone else check their television set?  Cal lines up in 22 personnel, two tight ends and two backs.  WSU puts 10 in the box and leaves one defender in solo man coverage with KA. 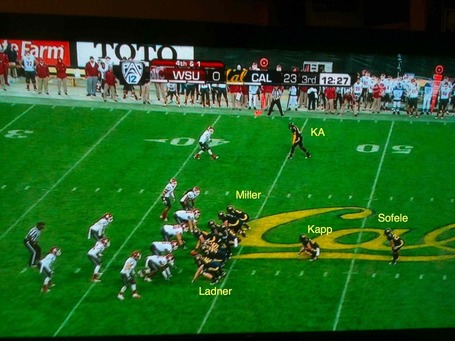 The line surges forward and Sofele immediately puts his hands up.  By Oski, this looks like the same play Cal scored on earlier! 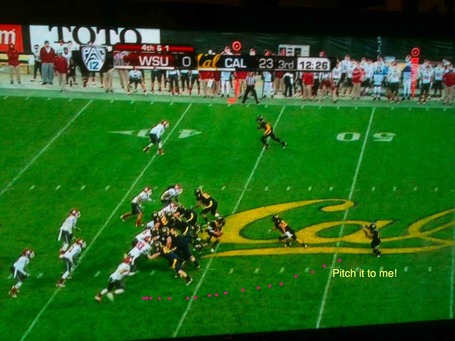 But this time, Maynard really does give the ball to the fullback Kapp.  He still carries out the fake flip and Sofele hunches slightly as if cradling the ball.  Meanwhile, Ladner has sealed the edge and Galas is already at the 2nd level looking to tear someone's head off.  (legally, I assume) 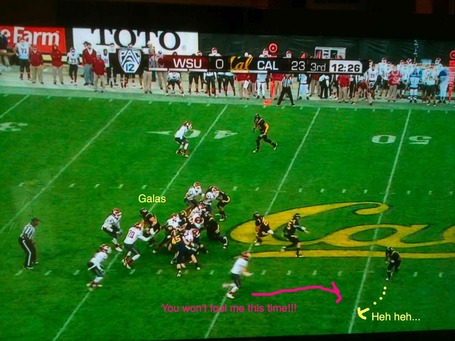 Although WSU's edge defender has been drawn completely out of position by the fake to Sofele, it's not looking as good on the line.  Cheadle and Miller lose leverage and Kapp is forced to bounce outside.  Meanwhile, WSU's solo corner remains fixated on KA.  This might offer some perspective on why we played so much zone last week - if your corners are in man, they can't help as easily against the ground game.  (And no, it doesn't explain why we couldn't hit a gimpy QB.) 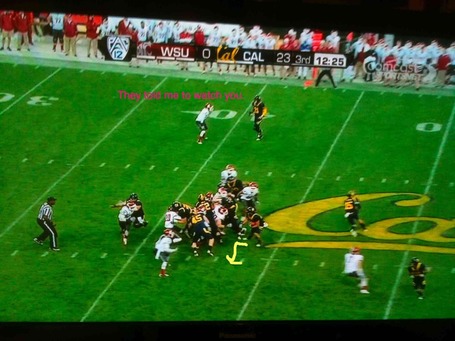 Although Ladner has the edge sealed, Galas is chasing their safety, and Schwartz is driving his man several yards backward, an unblocked Cougar defender has a shot at Kapp before the yardage marker.  Kapp gets low. 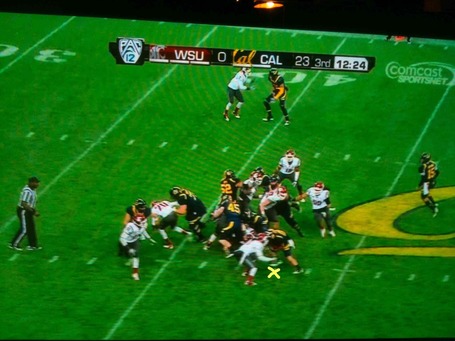 Kapp absorbs the contact, spins, and manages to keep his balance.  Meanwhile, the Cal Oline are still looking for guys to hit. 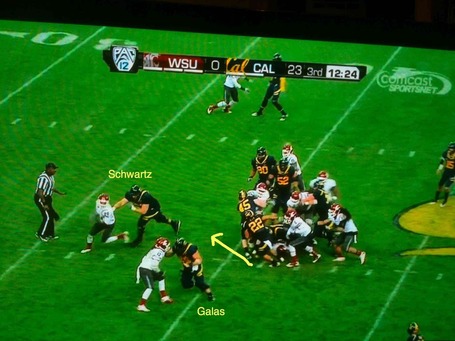 As Kapp heads towards open space, Ladner is doing a great job of sustaining his block.   Both Schwartz and Galas have beads on the remaining defenders. 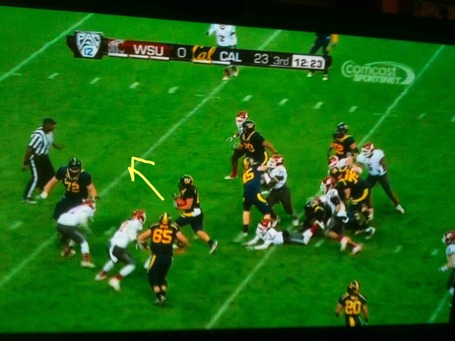 Schwartz clears the way by wiping out two men.  Miller hustles to wall off another defender.  The last Cougar corner finally realizes that it's a run, but he's out of position. 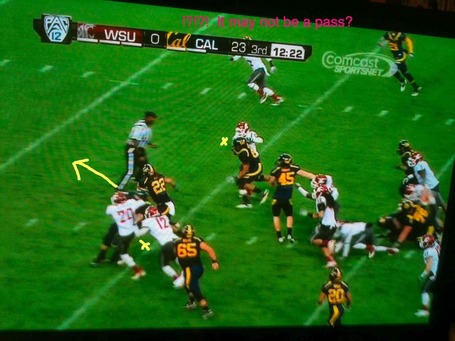 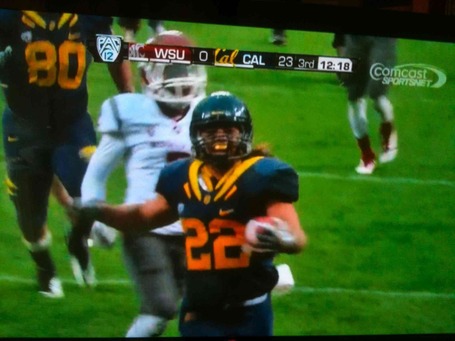 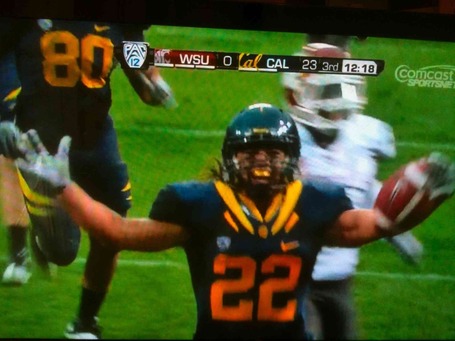 Final Thoughts:  It was possibly my favorite play of the entire season.  Great individual determination and effort by Kapp with plenty of hustle from his teammates.  To see the joy on the players' faces both on the field and on the sideline put a huge smile on my face.  It's for moments like these why I love college football.  Heck, I'm still smiling as I finish this write-up.  Go Bears!