Cal Football Recruiting Wire: Checking in on the class

Share All sharing options for: Cal Football Recruiting Wire: Checking in on the class

I'm trying my hand at once again inadequately filling the shoes of a guy who does his job well, Solarise, and taking the reins of the football recruiting stuff for a bit. With the regular season wrapped up on a positive note and bowl prep not yet underway, we can turn our focus to the future of the program. What's shaking in the class of 2012?

We've got a big recruiting weekend coming up in two weeks, and there will be some big time guys in the house this weekend too. Here's a quick rundown on what's going on with our eight current commits. That number may grow in the next couple weeks, or even days. Next week I'll go through the list of visitors forte December 9 recruiting weekend and discuss what our chances are on each, in my humble opinion.

Reminder, feel free to hit up the Golden Recruiting Board for updated info on all of our prospects. There's highlight videos and stuff! 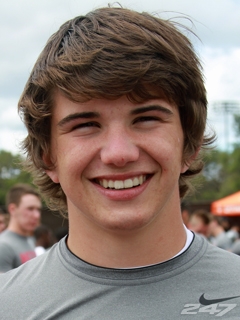 Kline's San Ramon Valley Wolfpack knocked off previously undefeated James Logan 28-14 in the second round of the NCS Division I Playoffs last weekend. Kline threw two touchdowns and rushed for another. His final stats were 18-23 for 223 yards, with 1 INT. On the season, Kline has thrown 32 touchdowns to just 7 interceptions. He's rushed for an additional 6 scores. And he's done it while completing roughly 70% of his passes. Me likey. Next up, San Ramon Valley will face off with crosstown rival Monte Vista. MV beat SRV 34-33 in the last game of the season. Should be a slobberknocker!

Zach was selected to the First Team, all EBAL team at QB (even though Monte Vista QB and Oregon commit was selected as leage MVP...what?). Kline will be on an unofficial visit to Cal this weekend and next weekend to do some recruiting with the coaching staff. He's the best. 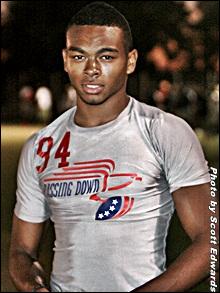 The season came to an end for Treggs and his St. John Bosco Braves in a tough loss to San Clemente last Friday in the CIF Southern Section PAC-5 Division quarterfinal 24-42. Little to hang their heads about though, as this was Bosco's first trip to the playoffs since 2006. Treggs was an absolute monster, finishing the season with 70 receptions for 1377 yards and 11 touchdowns. He notched 3 additional touchdowns on an interception return, a kick return, and a pass. He's really good. So good, in fact, that Rivals bumped him from #100 to #73 in their updated 2012 recruit rankings. He's been First-Team All-Trinity League the last two years, and another one is coming. Insane.

Treggs will take the #1 jersey from the departing Marvin Jones next year at Cal, and it will be well deserved. Like his dad, Bryce is swaggadocious and loves Cal. He'll be up for the big December 9 weekend as well, doing his part to buf up this class even more. 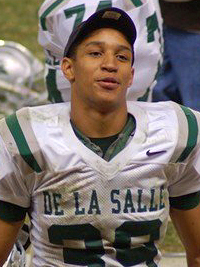 "Spartan + Bear = Barton". Mike's words, not mine. And goddam brilliant too. Mike is the leader of yet another solid De La Salle defense. With their only loss of the season coming in Florida against St. Thomas Aquinas, the Spartans are rolling through the CIF Division 1 Playoffs...dispatching Freedom 70-7 last Friday. They'll face Pittsburg this Friday in the semifinals for a shot to play at the Oakland Coliseum. If they win (which they will), they'll face the winner of the San Ramon Valley/Monte Vista game...two teams they've already handled this year. Not sure how I feel about the prospect of Bear on Bear crime if Kline's Wolves and Barton's Spartans both meet again. Poor Zach got sacked 7 times previously and was running for his damn life.

Barton was selected to the First Team All-EBAL Defense along with his 2013 DLS counterpart Michael Hutchings. Mike also was selected as a finalist for the 2011 Butkus Award, which in addition to selecting the most outstanding collegiate linebacker, is also awarded to the most outstanding high school linebacker. Pretty freaking awesome. Mike will be in attendance for the big recruiting weekend too. 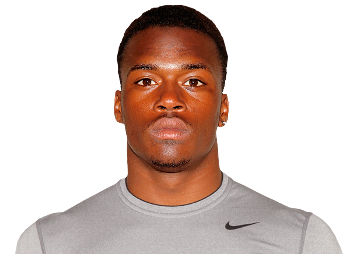 Walker's Kennedy Eagles had a tough year, finishing 4-6 in the BSAL. Kenny was a first team, all league selection though. He was selected as a Utility guy, which pretty much means he's good at everything...which is true. 4.4 speed and good hands mean he'll play WR for Cal though. Maybe he's our jet sweep guy? And you can best believe he can return kickoffs.

I've had a hell of a time finding Walker's season stats. He carried his team through most of the season though. But if you want a little taste of his talent...and his swagger, feast your eyes on this. I think that says plenty. I love this guy: 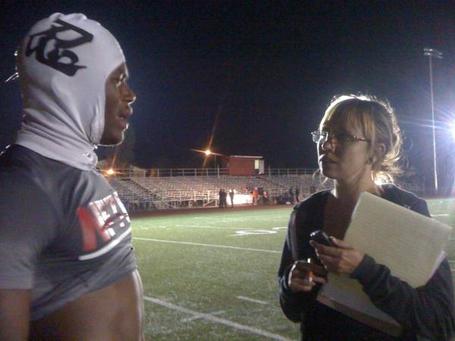 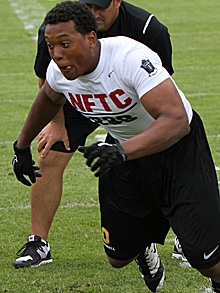 Hardy Junior (and senior actually) saw the Bishop O'Dowd season end with a tough loss to the mighty Campolindo Cougars last week in the quarterfinals of the North Coast Section Division 3 playoffs, 34-17. They finished the season 9-3 after starting 0-2. And with all due respect to both elder and younger Hardy...COUGAR PRIDE! Twist, can I get an amen?! Nickerson and the Dragon defense made Campo earn the win though. After the game, Cougar quarterback Brett Stephens (son of another Cal football alum Mark Stephens) had this to say:

"They had some unbelievable players. Hardy Nickerson (Jr.) is probably the best player I've ever played against. I'm just glad we kept fighting all night long."

Sweeeeeet. Hardy Jr actually had a rushing touchdown in the loss. In fact, he rushed for 388 yards and 6 TDs on the year, serving as the short yardage back for the Dragons. And in the mold of his dad, Hardy was an absolute tackling machine on the year too, averaging 13.2 tackles per game. Ridiculous. HAMMER TIME! He was the HAAL Defensive Player of the Year as a junior in 2010, and was a unanimous selection as a First Team All-League Linebacker this year. Great things ahead for Hardy Jr. 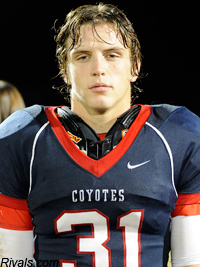 The Hoffpauir's Centennial Team finished the season 11-2, losing 31-30 to eventual champ Chaparral in the semifinals of the Division II AIA playoffs. Chaparral actually defeated Centennial in the state finals the year prior as well, so you know this one stung a little bit. Centennial is a very good program though, (winning state championships in 2006, 2007, and 2008) so they'll be back. Zach was pretty limited during the playoffs due to an ankle injury. He missed one game and saw minimal time in two others...including the loss to Chaparral. Worth noting that he essentially won the game for Centennial in a second round tilt against Deer Valley, when he came in and made two stops on the goalline at the end of the game to secure the win...injury and all. Over the season, The Name was a holy terror on both sides of the ball...rushing for 436 yards and 11 TDs as a slot back, catching 18 passes for 239 yards and an additional TD as a wide receiver, and recording 39 tackles and 4 interceptions as a safety.

He was first team All-State and West Valley Player of the Year as a junior, so I'd expect similar accolades after the way he performed this season. 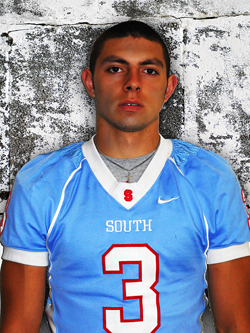 Espitia was a one-man wrecking crew this season for the South Salem Saxons. He accounted for 27 touchdowns on the year; passing for 12, rushing for 14, and catching one more. He tallied 2156 total yards from scrimmage this season. ATHLETE. And at fullback for us!? He's got size, speed, and hands. He was a lone bright spot in a tough year for the Saxons. After being favored to win the Central Valley Conference, they started the season 0-6 amid some serious inconsistency and a bunch of injuries. They rallied to win their next three games, before dropping a playoff game to Central Catholic 51-6 and finishing 3-7.

For his efforts this year, Junior was selected as the 2011 Offensive Player of the Year for the Central Valley Conference, and also was selected as the First Team QB of the CV All-Conference team. This guy is a great athlete and the idea of him playing at fullback for us is awesome. Another weapon, and a big one. 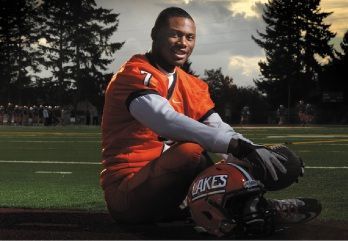 Dozier's Lakes High School team suffered its lone defeat of the season in the quarterfinals of the WIAA 3A Playoffs to eventual champ Bellevue, 35-14. Lakes finished the season at 10-1, and Dozier was a big part of that success. He was all over the field for Lakes, playing quarterback at times, running back at others, but primarily wide receiver and cornerback. Cal will be taking Cedric as a wide receiver. One the season, he caught 28 balls for 479 yards and 5 TDs. He rushed for an additional 291 yards and 3 TDs, and also threw for 3 more touchdowns and 238 yards. As a QB, he completed 17 of the 20 passes he threw. HOLY WILDBEAR! On defense, teams stayed away from him for the most part. He only had 13 tackles and 1 INT on the year. But that was good enough to garner him South Puget Sound League 3A Defensive Player of the Year.

In fact, Cedric was selected to the SPSL First Team on Offense (WR) AND Defense (CB), which is pretty incredible and a testament to what a tremendous athlete he is. Weapon!!!!

Pretty tremendous list of accolades and performances above, yes? While our class is small, its absolutely loaded with talent that can contribute quickly. It will be fun to watch this class grow as well in the next couple months. This is a special group. Apologies for not covering any of the uncommitted prospects in this installment, but that will be better served next week once the visitor list is a bit clearer. Plus, I thought these guys deserved some press of their own.

Thoughts and feelings? Let's hear them. If you guys have questions, I'll try to cover them in the comments.