Share All sharing options for: Fantasy Week in Review and Bowl Pick'em Signups

And here I thought I was going to make my way back up the rankings. Then again, going 9/21 will stop that from happening.

I'd do some Visio or Paint table to show you the playoff brackets since CBS Sportsline is too damn retarded to come up with a playoff system of its own, but I don't have the inclination. Really, CBS? You're going to make me set the playoff brackets and matchups each week manually? Really. Really? REALLY? 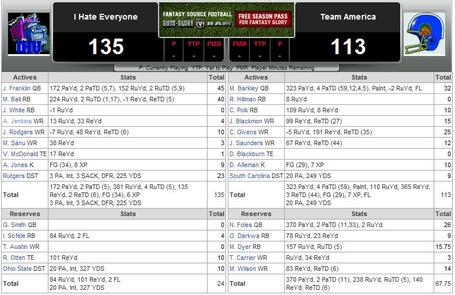 IH8EVR1 walked over Team America 135-113. How, you ask? James Franklin, everybody! Man, I should have just been playing that guy the whole year. Not that Geno Smith has been doing poorly, but he's hardly been as great as I hope he would be. And James White, this is the last straw. You're totally out this week, and Isi is SO in. 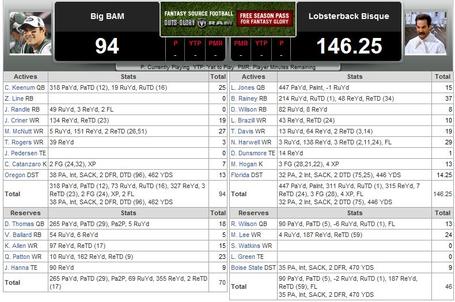 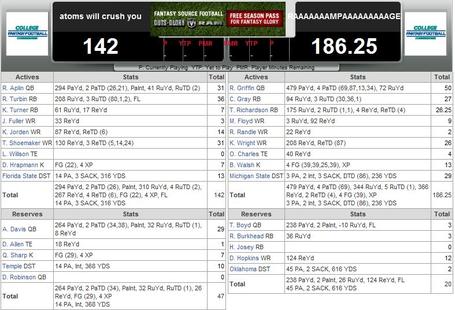 RAAAMPAGGE romped 186.25-142 over atoms will crush you to set up a finals matchup between himself and Lobsterback Bisque. Atoms did reasonably well in getting three 30+ point performances, but the trio of Robert Griffin III, Cyrus Gray, and Trent Richardson was too much to handle. 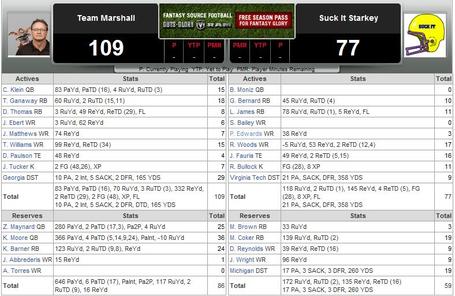 Team Marshall managed a 109-77 victory over Suck it Starkey in the mediocre portion of the bracket, as Starkey seems to have given up on his team after a series of demoralizing losses in the first few weeks of the season despite having been the league's higher scorer for quite some time. The Georgia defense powered Team Marshall, while Bryant Moniz wasn't powering anything other than his barcalounger. 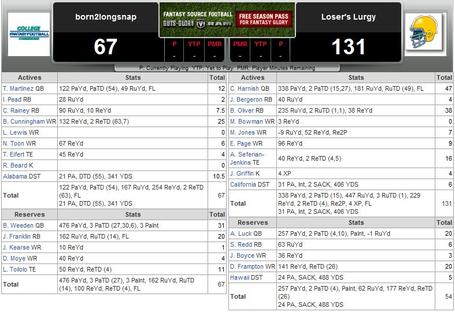 Loser's Lurgy crushed born2longsnap 131-67 in a rematch from last week, behind the strength of two performances which would have beaten born2longsnap all by themselves. 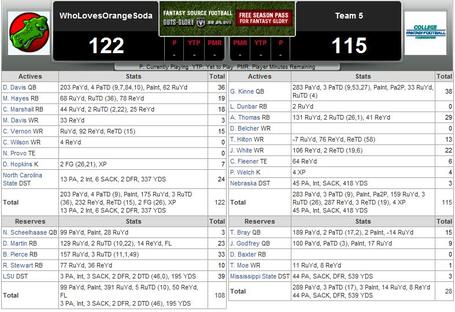 WhoLovesOrangeSoda defeated Team 5 122-115 in a matchup that I'm not sure anyone bothered scrolling all the way down here to read about. Prove me wrong, people.