Cal Football: A Golden Spotlight on Zach Maynard against the Stanford Cardinal

Share All sharing options for: Cal Football: A Golden Spotlight on Zach Maynard against the Stanford Cardinal

Hey gang. I'm going to attempt to fill Kodiak's shoes this week in the Golden Spotlight post. Unfortunately for all of you, I'm neither as good at the X's and O's analysis as he is, nor as savvy with computer stuff and Photoshop. In fact, I don't even know how to add in all the snazzy arrows, words and stuff on the pictures. I tried, but when I couldn't figure out how to change the color of the font I was using I decided it would be a waste of time. Hopefully this significant failure on my part will help everyone appreciate Kodiak's work that much more. Begging all your pardons ahead of time, because this post just might suck.

Obviously a lot to take away from the Big Game performance on Saturday, some bad and some good. I've chosen to focus on two key plays in particular, one bad and one good, starring quarterback Zach Maynard...who had a pretty damn good day in a game where we needed him to be pretty damn good.

Let's start with the bad.

SCENE: It's 4th and 4 with 3:06 to go in the 3rd quarter. We're down 13-28 and our drive has stalled at the Stanford 43 yard line. After going into halftime down 13-14, we've gone deeper into the hole after Stanford scores two unanswered touchdowns. The staff elects to go for it, because at this juncture we desperately need to get some points and momentum.

Cal comes out in a modified pistol formation with fullback John Tyndall lined up on Maynard's left and Isi behind him, while KA is in the left slot and Marvin is out wide. Methinks we might be rolling Maynard left?! Stanford is in their standard 3-4 front, with the two oustide linebackers rolled up on the line of scrimmage. 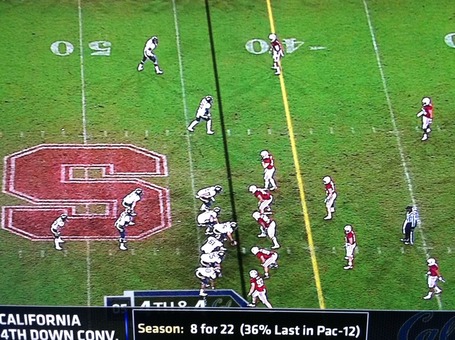 Marvin goes in motion and sets up behind Keenan. The safety rolls up in the seam. 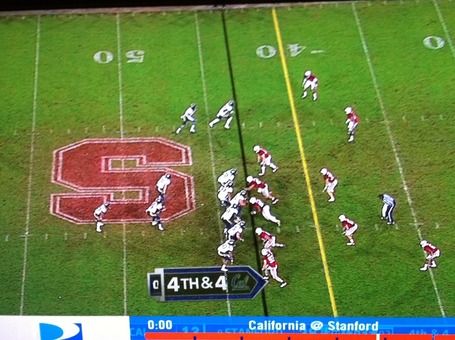 Aaand the snap. It's a pass, and we don't even bother to go play-action. Maynard starts to roll left (!!!!). Schwartz releases to go after Stanford's inside backer (#35) while Tyndall (31) shoots up to the line and engages Furd outside linebacker #44 on the outside. Schwenke and Galas block down and Isi flows right. Outside, KA charges hard upfield, drawing both the Stanford safety and cornerback. Marvin follows him and then starts his cut on an out route right at the first-down line. MONEY! 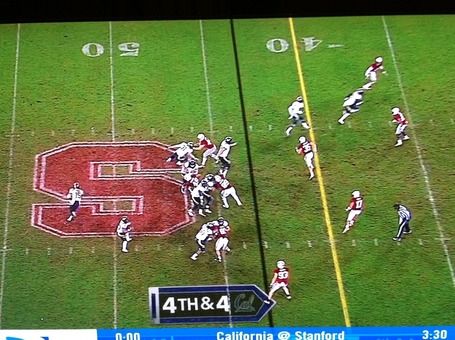 DERP! With both the safety and cornerback on top of Keenan (running a deep out), Marvin slips and stumbles on his cut. Missouri's Faurot Field thinks the Stanford turf was shit on Saturday, but I guess the lack of catastrophic ACL tears speaks otherwise? Zach's arm is cocked but he hesitates when Marvin goes down. DECISION MAKING! 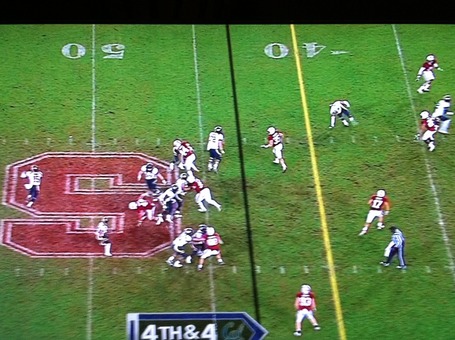 Marvin has regained his balance and is open. Schwartz has stayed on ILB # 35, but the tricky little bastard has pushed his pursuit angle out and gotten himself directly between Zach and Marvin. The throw is there, it just needs a little touch on it. DECISION MAKING? Meanwhile, #44 for the Furd has gotten away from Tyndall and is joining the pursuit of Zach. 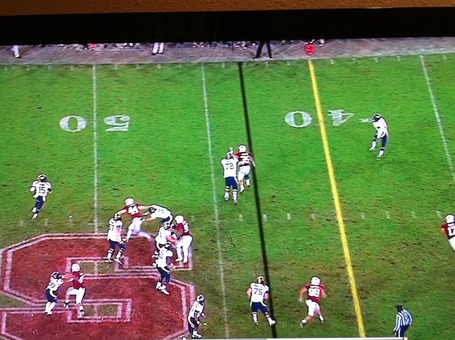 Sigh. The Stanford cornerback (#26) has broken off and closed on Marvin after Keenan continued up the field (not pictured), leaving the safety alone on KA. #35 has beaten Schwartz and is closing fast on Zach. Marvin is running out of room, and the window of opportunity has closed on this route as Zach starts to studder-step and back himself up to reset. 44 is closing hard too. 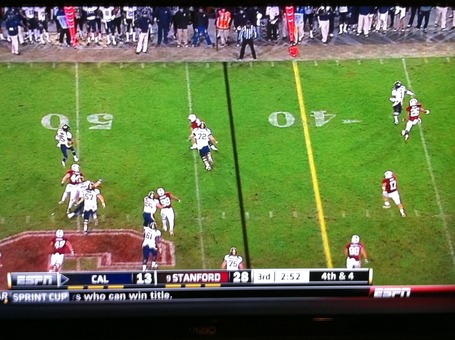 Marvin tries to release up the sideline but the Stanford cornerback is unamused and has blanketed him at this point. Wherever Keenan now is, Zach cannot get it there. 35 and 44 for Stanford are racing to see who gets to Maynard first, and FAIL is coming with them. 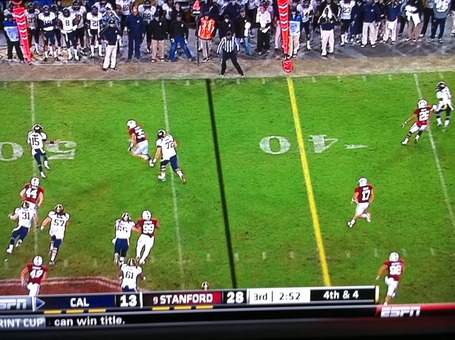 35 wins, and FAIL arrives for Cal. Maynard is sacked at the fifty yard-line, losing 7 yards and turning the ball over on downs. We're still down two scores and now Stanford is set up with great field position. FURK. 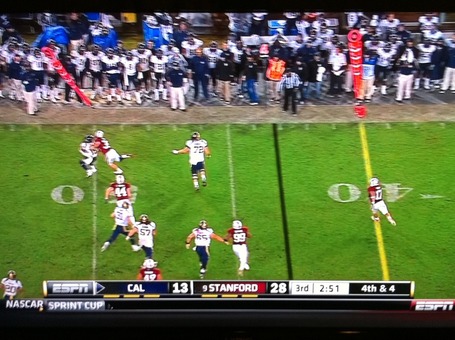 <QUICK ASIDE> This is when I was really hoping to have figured out Photoshop. I was keen on the idea of pasting trollface to the head of the red beret-wearing nerd in the Furd Axe Committee. Alas, these skills are beyond me. Like Andrew Luck, I'm just a simple caveman. Your editing panels and dodge tools frighten and confuse me. Trust me though, it would have been appropriate. <QUICK ASIDE> 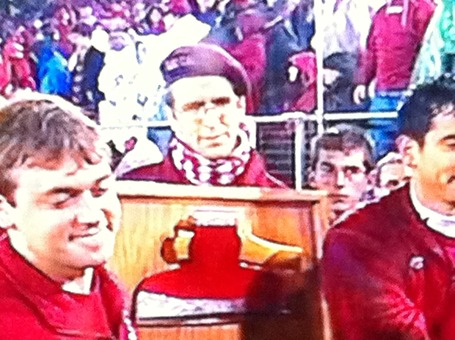 Sadly, this play was there and should have worked. Marvin slipping was one reason for the failure, but Zach still had the opportunity to hit him once he had recovered. This was another instance of Maynard holding onto the ball too long until ultimately the Furd defense recovered and made him pay. In the end, I don't know if converting this fourth down would have ultimately led us to points. But at the very least our failure to convert allowed Stanford to get the ball back and grind even more time off the clock. Time we could have used (or wasted) in the waning seconds of the game (ZOMG FIRE TEDFURD!)

Cal comes out in a double tight end I-formation set (Wark and Miller are the bookends), with Spencer Hagen lined up on the right wing. Maynard immediately motions the fullback Tyndall to the wing opposite Hagen. 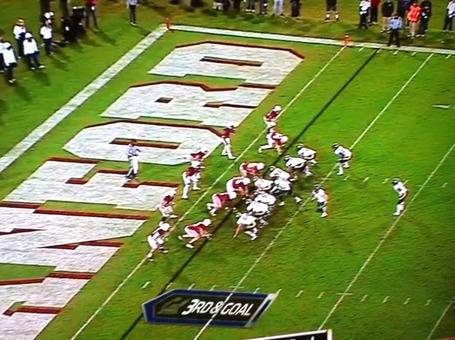 Tyndall gets set, which puts us into a jumbo flexbone formation. We've got CJ Anderson alone in the backfield, making this look like an awful lot like a power run. 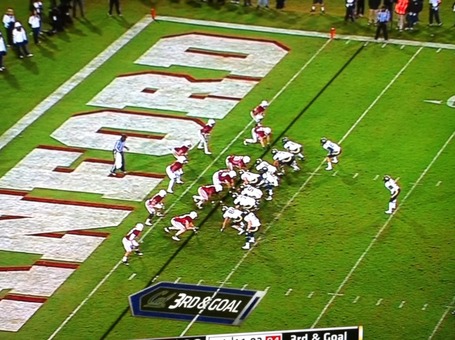 And the snap. Yep, looks like CJ's gonna get it going hard to the right off tackle. Summers Gavin and Cheadle open up a nice hole for him. Hey, where the hell is Spencer Hagen going? 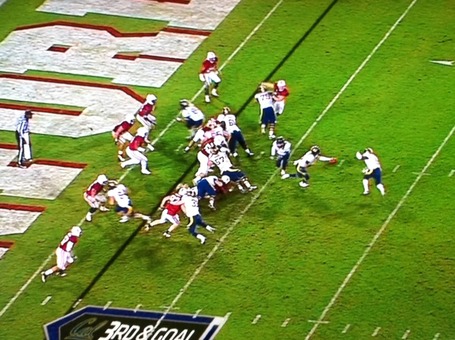 SIKE! Maynard fakes the handoff to Anderson and then rolls out left (!!!!). Miller and Wark release and look for space. Hagen continues dragging left underneath the offensive line. 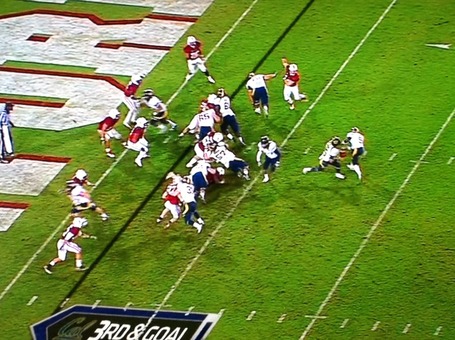 As Maynard rolls out, he looks for his tight ends. Miller is tied up with the Stanford middle linebacker (#17)...in the endzone...RIGHT IN FRONT of the back judge. Hmm. Ladies and gentlemen, PAC-12 refs! It would be funny if it weren't so sad. Hagen is just getting clear of the pileup on the line, but the Stanford outside linebacker (#47) has picked him up. At the bottom of the screen, Wark has run an out pattern and has gotten a step on Stanford LB # 35. Again, Maynard should just put this over Wark's shoulder and into the back of the endzone. Gravy. 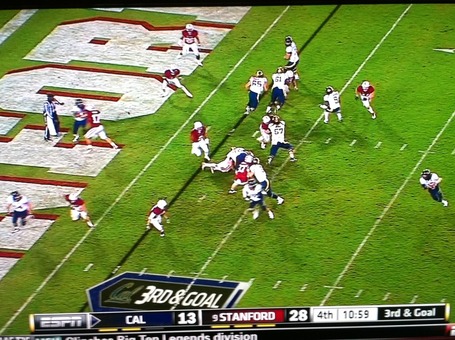 Or not. Furd LB # 35 has recovered and closed the gap on Wark. A throw to Wark will have to be perfectly placed at this point. No longer open, and not a throw I'd expect Maynard to make at this point. Miller's being covered tightly as well, and Hagen is still being blanketed underneath. Stanford LB # 9 and DE #93 are giving chase to Maynard. 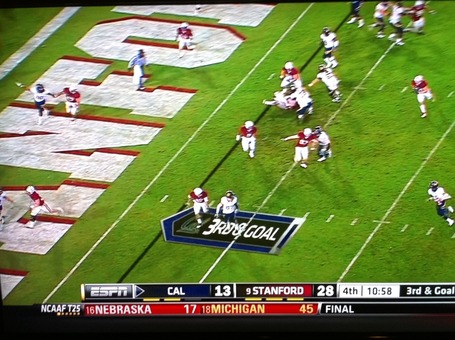 With pressure intensifying and all his options in the passing game covered, Maynard turns upfield and towards the converging Stanford defenders. #9 is closing fast with # 93 behind him. There will be no cutback lane for Maynard. # 47 is still on Hagen, but Maynard turning upfield puts him in the unenviable position of having to make a quick decision. Should he stay with Hagen or close on Maynard? 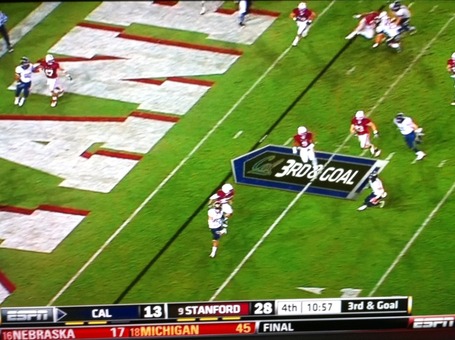 BOOM, ROASTED. 47 takes a single step towards the charging Maynard and leaves Hagen. That's all Zach needed to see. If you don't know who the mark is...you ARE the mark. Maynard flattens his run out and cocks back as Hagen heads down the line. 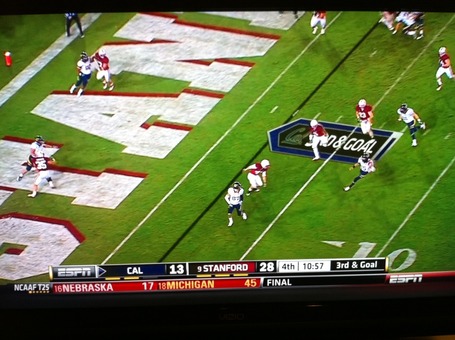 A little flick of the wrist and Hagen is all alone. 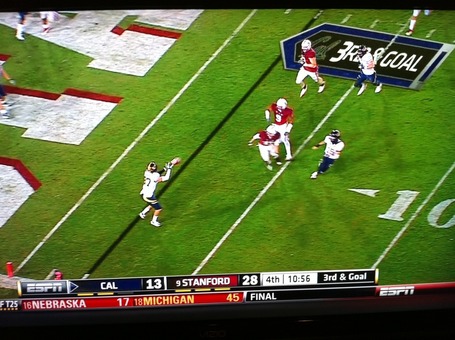 A Cal touchdown? In the fourth quarter?! Tyndall can't believe it either. 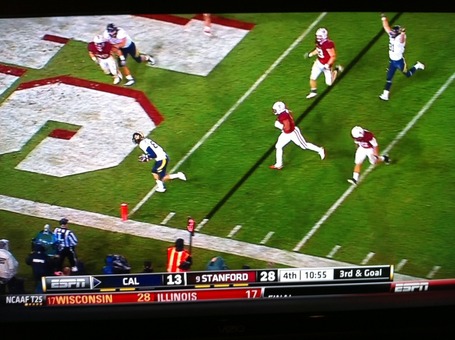 Spencer Hagen pays a quick tribute to Crom for giving him the strength to fight, and also teaching him the Riddle of Steel. Crom laughs at your Four Winds. 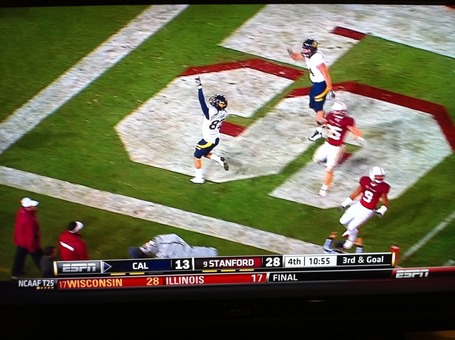 With the two-point conversion after this touchdown, Cal makes it a seven point game at 21-28. We remember what happened from there. I thought this play was a pretty cool showcase of what Maynard brings to the table. Although the touchdown could have been had if he had thrown to Wark earlier, it would not have been nearly as likely of a completion as the ultimate four-yard flip to Hagen. And because Zach does present a threat to run in space, Stanford had to respect that possibility. I had a four second emotional rollercoaster ride as I saw this play develop, and then unravel, and then finally succeed. That's what Maynard can do. And although I'm sure that wasn't quite how the staff drew it up, it's a familiar theme of getting Zach out in space and presenting him with targets at multiple layers of the field. The Hagen wrinkle was cool.

So there you have it. Both bad things and good things can come to those who wait. Unfortunate that this came in a losing effort, but I like the way the team is playing right now, and I think the offensive playcalling has been better in terms of playing to Maynard's strengths as a quarterback rather than highlighting some of his deficiencies. He did far more good things than bad, so that's a positive...especially against a tough defense in wet weather. And I think we'd have won most of our games if that had always been the case. A similar performance against ASU should get the job done.

Sorry again for not being Kodiak this week. Hopefully you can all get over it. He'll be back soon. Go Bears!