Roll On: Previewing The Stanford Defense

Share All sharing options for: Roll On: Previewing The Stanford Defense

Statistically, we are the second best defense that Stanford has faced this year. The first? Oregon of course. And they "held" Stanford to 30 points. The problem is, Oregon can hold a team to thirty points and still win.

ManBearCal has left me with the challenge of convincing you that Cal's offense can get into the 30s. Um.

Exactly two teams have had consistent, meaningful success against Stanford's defense: USC and Oregon. I'm immediately dismissing Oregon because there's really no comparison between their scheme or personnel. But USC. Can we do what they did? I think our skill position players match up reasonably well with what the Trojans have. Their line is probably a little bit better than ours, but if you squint and assume that the line play we've seen the last two weeks has more to do with improvement and coaching than playing bad defense then we're in the same range. What's missing?

Do you think Zach Maynard has a Matt Barkley game in him? Hell, Barkley arguably wasn't at his best against Stanford, but he was mostly mistake free and he kept moving the offense.

But plenty of lightly regarded quarterbacks have come through with winning Big Game performances. If mistake-free-game-manager-Zach and big-play-game-winning-against-Colorado-Zach show up on the same day, there are just enough chinks in Stanford's armor. That's right, I'm saying there's a chance.

Typically when assessing a defensive line I’m looking for sacks and tackles for loss as indications of talent. But this is the first 3-4 team Cal has played all year long, and so they have to be graded differently. Still, Stanford’s starting trio have combined for 5.5 sacks and 17 tackles for loss, solid totals in a 3-4.

Don’t expect to see much from the backup linemen, who collectively average 1.4 tackles/game. But when the starting group is effective you don't need much from your backups, do you? If the three man line is creating problems by themselves, nothing else matters. Game over, man. Game over!

The strength of the defense, even without Shayne Skov. Look for 5th year senior Max Burgen to get plenty of playing time on the inside behind the starters. The spread of individual defensive stats looks like your typical 3-4. The inside linebackers make the bulk of the tackles while the outside linebackers are the guys making the big negative plays. Murphy and Thomas have combined for 11 sacks and 22.5 tackles for loss, and both are explosive playmakers. Thomas in particular is being touted as the likely defensive player of the year in the conference, and he's earned it by making big plays all year long.

It’s unclear exactly how much the loss of Skov hurt this unit and the Stanford defense as a whole, but I think it might be the difference between a good defense (similar to Cal) and a great defense (similar to Oregon). It's a credit to Harbaugh's recruiting that a loss like that hasn't had a bigger impact . . . until this Saturday amirite guys?!?

Considering that Stanford does a great job pressuring the quarterback, and considering that Stanford has had huge leads and can sit back against teams forced to pass the ball, it's amazing to me that Stanford only has four interceptions all year long. And with three senior starters! Howell is probably the best player and his ability to play after missing all of the USC game and most of the Oregon game with various injuries is something to watch.

Honestly, I'm having trouble finding much interesting to say about this unit. They do their job in an unspectacular fashion. There's nothing elite to see here, but no obvious spot that Cal can easily exploit. Keenan Allen and Marvin Jones will get open often enough - they always do. But it's never that simple, is it?

I feel like this is where the game is going to be won. Over the last two weeks Cal’s offensive line (penalties aside) has been dominant, and Isi Sofele and company have looked great. But those two teams have run defenses ranked in the lower half of the nation.

Stanford is hardly invulnerable against the run – both USC and Oregon gashed them for multiple big plays. But Cal’s running game, while solid, isn’t as good as USC’s run offense and isn’t in the stratosphere of Oregon’s. Perhaps the best comparison would be Washington’s run offense, which managed a robust 6.6 yards/carry. Unfortunately, two plays netted 107 yards while the remaining 26 runs only managed 65 yards, and Washington was forced to abandon the run early when Stanford raced to a big lead.

Bottom line – this game is the final test for an improving offensive line. They have the talent to perform just like they did in 2009, but it will take a strong, mistake free effort.

The weaker half (in a relative sense) of Stanford’s defense also happens to be the weak half of Cal’s offense. And while the yards/attempt stat is mediocre, it’s offset by the fact that Stanford averages a tad more than 3 sacks/game. If the offensive line can keep Maynard’s jersey clean there will probably be open receivers – Stanford has given up a pretty high completion percentage – but protecting the quarterback is easier said than done.

The model against the Stanford defense hasn’t changed. Kevin Riley created the blueprint in 2009, in perhaps his best game as a Bear. Controlled, calm, accurate. Hit your receivers underneath, hit your receivers on the sideline, manipulate the pocket, and stay upright. But Stanford’s defense has gotten better since then and most Cal fans probably don’t think Maynard has a game like that in him. This is the week to prove those doubters wrong.

As I said above, it's hard for me to believe that Stanford is 112th in the nation in interceptions. Stanford actually has the 3rd most forced fumbles in the nation. Stereotypically the disparity makes sense – the Cardinal are known for strength rather than speed, so big hits leading to fumbles would intuitively be more common than quick players stepping into passing lanes or catching up to deep balls. But seeing as our biggest debacles of the year coinciding with tons of interceptions, I’m more relieved to see that Stanford hasn’t had many interceptions this year.

Yikes. Even Oregon struggled on 3rd down. I would guess this is presumably a function of an excellent run defense creating plenty of 3rd and longs, but still. Scary.

This is somewhat less scary. Admittedly Stanford is near the top in preventing teams from scoring at all when they reach the red zone, but that is mostly because, bizarrely, Stanford opponents have missed 66% of their field goals (and Stanford has ‘only’ blocked 3 of those 10 misses. It’s bad enough that they’re good, why do they get to be lucky too?!)

In many ways, Stanford’s defense is pretty similar to Cal’s defense. They both run the 3-4 and do a good job pressuring the quarterback. They are generally stout against the run, especially up the middle. There are some weaknesses in the secondary, but those issues are masked by the pass rush.

For Cal, the ability to move the ball will really come down to the tackles. Can Mitchell Schwartz and Matt Summers-Gavin give Maynard the time he’ll need? How will they deal with Stanford’s explosive outside linebackers? Stanford thrives on creating negative yardage plays. It’s one of the main reasons they are so successful on 3rd down. If the line keeps defenders out of the backfield I trust our running backs to get solid yardage. If they keep defenders away from Maynard I think he’s capable of hitting his targets (Capable doesn’t mean it’s going to happen, or even likely – just capable).

Also, we don’t usually talk much about special teams in these previews, but for God’s sake can we win the field position battle for once? I can’t find average starting field position anywhere on the internets, but I’m pretty sure it generally hasn’t been good.

So really, it's quite simple. To win we just need to contain a great power running game, bother the golden boy quarterback, get consistent push against a great run-stopping front seven, have our inconsistent quarterback make some plays, and win the field position battle with special teams. Easy.

You want the best reason to hope? Here it is: 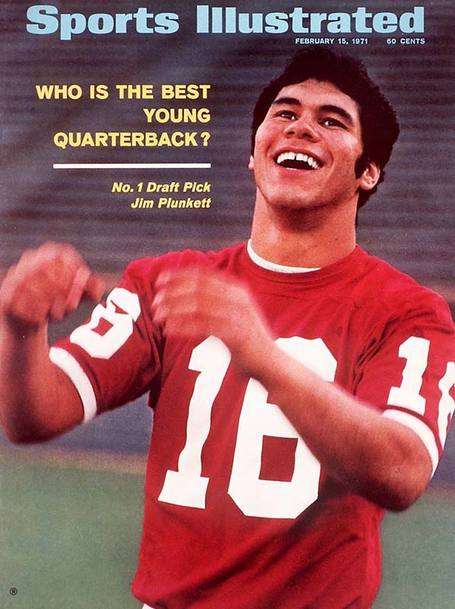 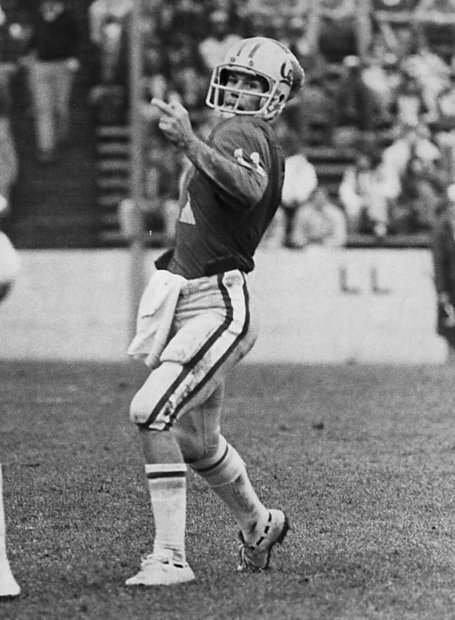 Won a Big Game (and flipped off everybody who didn't think he could!) 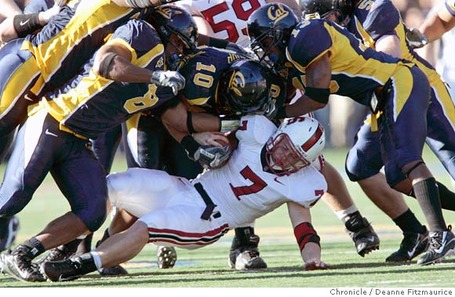 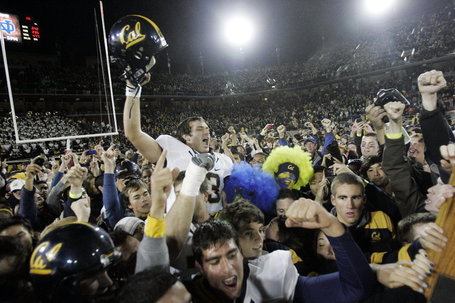 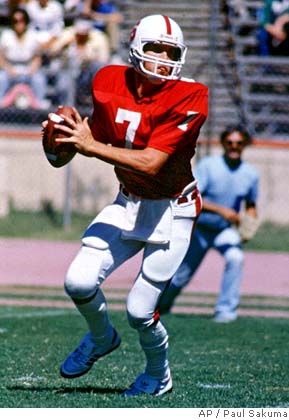