Yeah, aussie_picks pretty much has this thing in the bag.

At least I'm one game up on the Eagles. 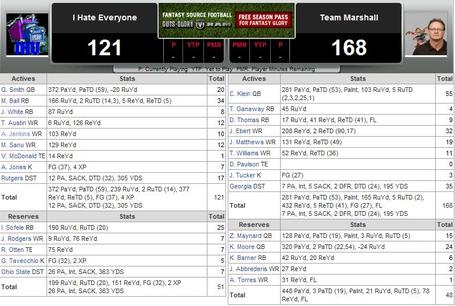 Just who is this Colin Klein character? 55 points?!?!? Are you kidding me? You can't just outpoint Geno Smith and Montee Ball all by yourself and get away with it! On the other hand, I should probably stop playing James White instead of Isi Sofele. His production recently has really been surprising. Not that it would have made any difference this particular week. 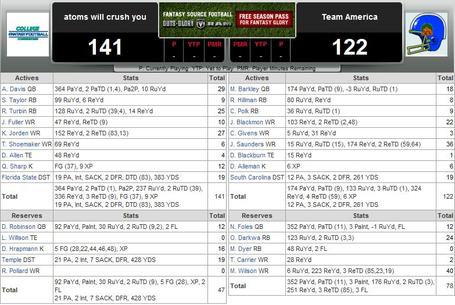 atoms will crush you managed to crush Team America by a count of 141-122. atoms was led by a bunch of guys I've never heard of - really, A. Davis? R. Turbin? K. Jordan? What?Team America put up a game effort, but Chris Polk only putting up 9 points didn't help matters at all. 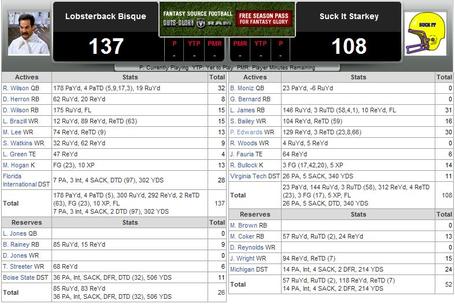 Lobsterback Bisque kept bringing the hurt, defeating Suck it Starkey 137-108 in a matchup where Bryant Moniz contributed a total of zero points.  So did Robert Woods. A bit anticlimatic here. 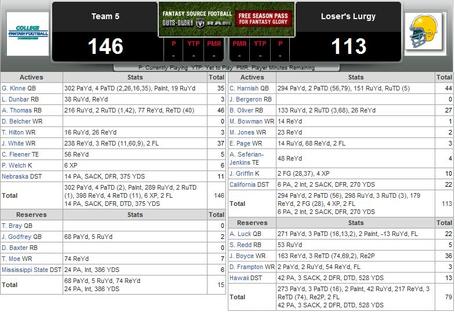 Team 5 awoke long enough to thump Loser's Lurgy 146-115 behind Greg Kinne and two guys I've never heard of who had great days. Way to go, A. Thomas and J. White. Way to go. 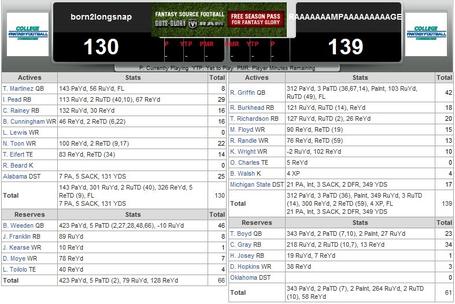 RAAAAMPPPAAAAGGGEEE won the closest matchup of the week 139-130 over born2longsnap. Robert Griffin do what he do, and Taylor Martinez just couldn't keep up. Which was too bad since he got some good help from Isaiah Pead and Nick Toon. 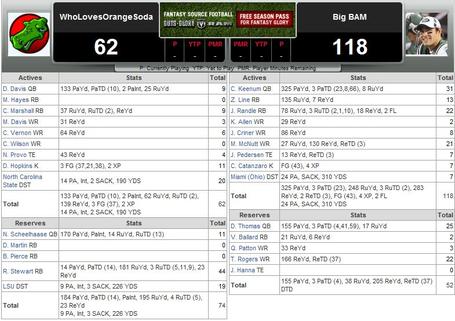 Big BAM pulverized WhoLovesOrangeSoda 118-62 in a matchup where Orange Soda got a grand total of two performances of more than 9 points. From its kicker and defense. That's not a recipe for success any week.