Share All sharing options for: Blog From The Fog Recap + Photo Essay

As we mentioned last week, CGB was given the unique opportunity to participate in ‘Blog From The Fog,’ a social media event put on by the athletic department.  Three of our writers were invited to see the field prior to the game and watch the game itself from a luxury booth.

So like the true professionals we are, Kodiak, Avinash and myself gathered in lot A, got a pep talk from TwistNHook, and departed with our blogging game faces on!  After 5-10 minutes of aimless wondering we met up with our Cal contacts, received nifty field passes, and walked onto the field.  There we met up with the fine folks from Calfootballblog.com and Goldenbearlair.com.  It was an internet football nerd jamboree!

The first impression?  AT&T barely fits a football field.  You already knew that, of course.  We were told not to cross the yellow dashed line, which can be hard to avoid because it nearly reached the wall! 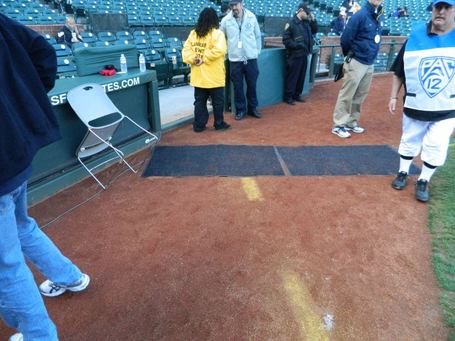 Of course, even if we were inclined to break the rules we were immediately discouraged by the sight of multiple 300 pound linemen warming up for the game.  Guys who are 6’5’’, 325 are intimidating in street cloths.  When you add pads, cleats and a helmet they look a good 5 inches taller and 50 pounds heavier.  Suddenly the jokes about Tiny Moala causing earthquakes on the Hayward Fault don’t seem as far-fetched! 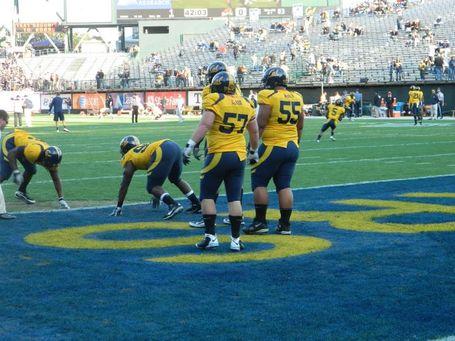 This picture doesn't do him justice 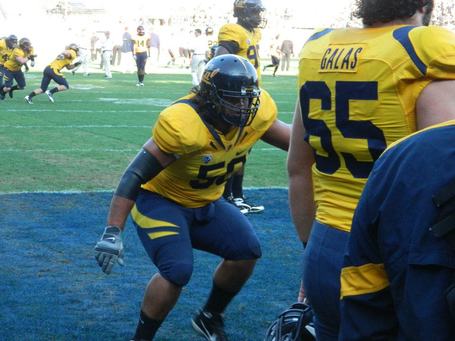 The offensive line and defensive line ran a joint drill that appeared to have them practicing snap reactions.  Watching 9 or 10 big guys surge forward at once is frightening.
We might have had more room to roam, but today was senior day, which meant countless family members were on the field.  Sandy Barbour was making the rounds as well! 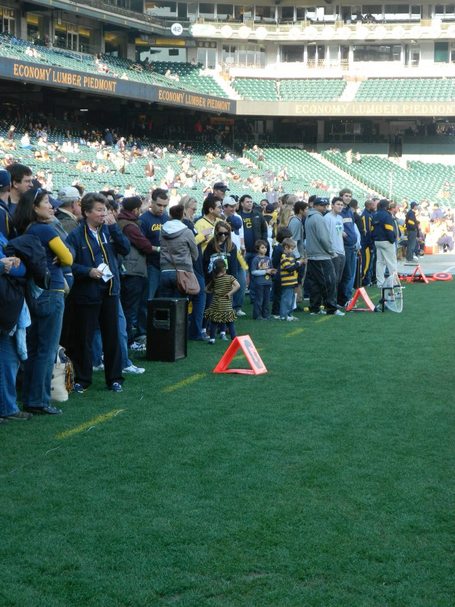 And local Giants-related celebrity Amy G!  Does anybody know what broadcast she was working for? 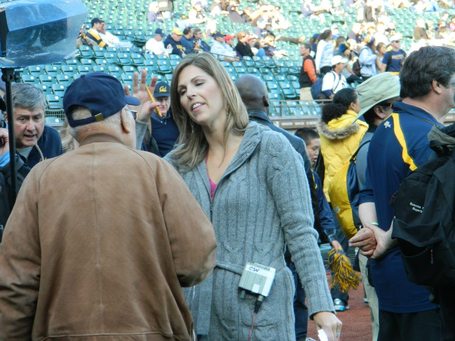 Sorry I didn't get a more flattering shot Amy!

When you’re actually on the field it’s hard to take your eyes off of the players, but I tried to take things in from their point of view.  From the field AT&T Park looks much bigger/taller.  Imagine looking up and seeing ~40,000 people stacked up vertically, all to watch you run around. 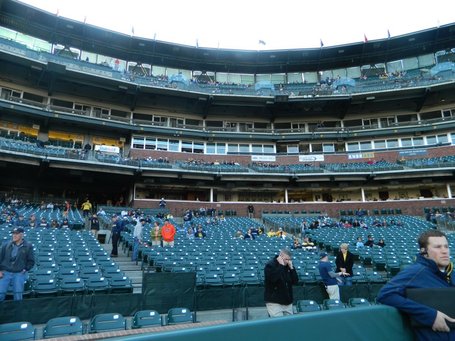 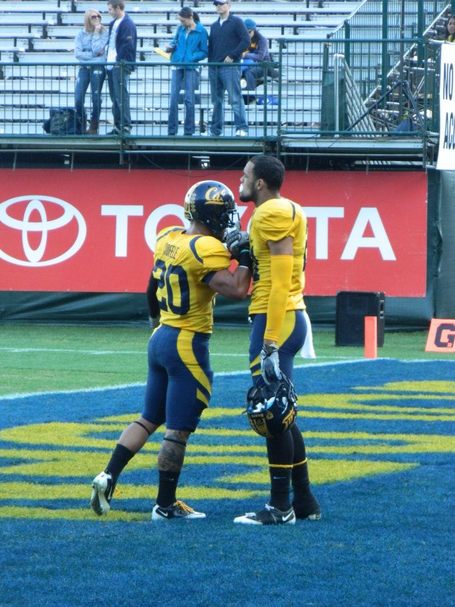 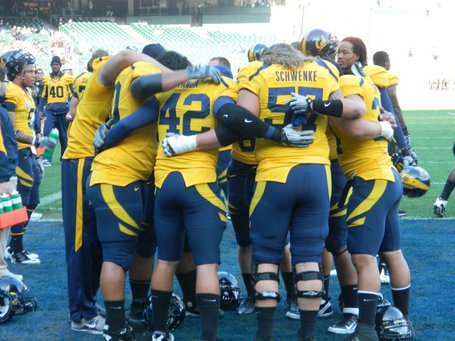 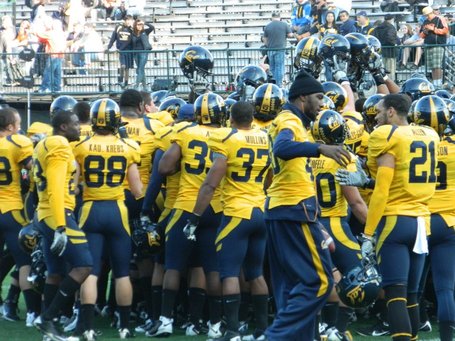 Bummer to see McCain in street clothes but his teammates played well in his absence.  Also, dude is super lanky.

When the players left the field it was time for us to head up to the booth.  We made our way up the aisle and to an elevator, which took us up four stories.  We emerged in . . . a magical land filled with Giants lore in every direction.  Willie Mays, Christy Mathewson, Seal Stadium, photos and artwork.  I may have shed a tear or two. 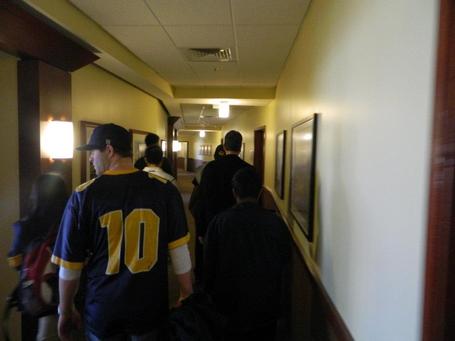 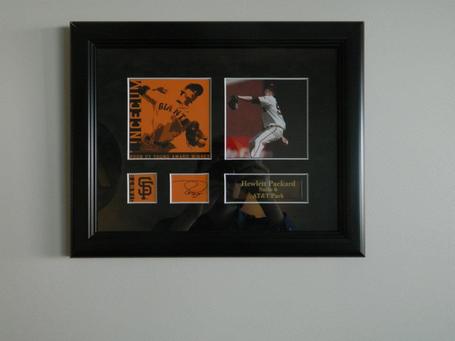 Hewlett-Packard apparently owns the booth we stayed in during baseball season.  Since both Hewlett and Packard graduated from Stanford perhaps it's not surprising that they weren't at the game.  I'm sure they're thrilled to know that a bunch of die-hard Cal bloggers took over their suite while Cal won and Stanford lost! 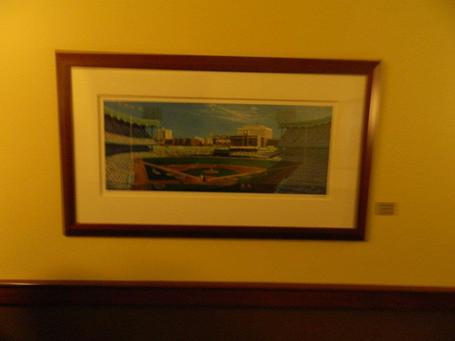 We finally reached our box, and what do we find? 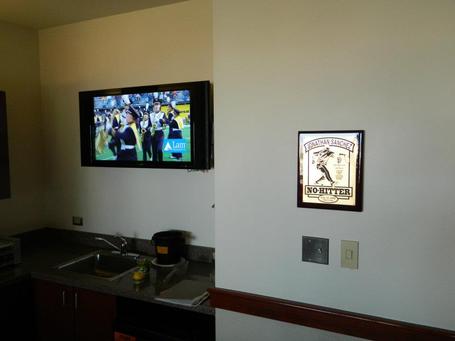 A Jonathan Sanchez plaque!  Awkward!  Will they replace it with a Melky Cabrera memento?  More importantly, there was a nice big screen TV that allowed us to watch Andrew Luck throw interceptions while we simultaneously watched Cal win.  Rapture!

The room was lovely, and had a nice spread of free munchies: 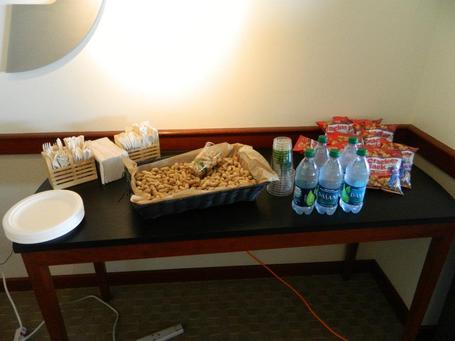 Buy me some peanuts and cracker jacks.

But the most impressive part?  The view.  We could even see the Campanile! 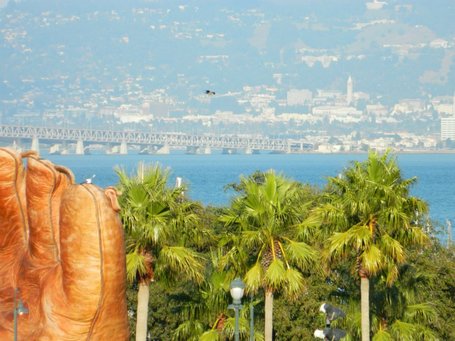 Nearly as impressive?  The bathrooms, which were inexplicably huge.  1% baby! 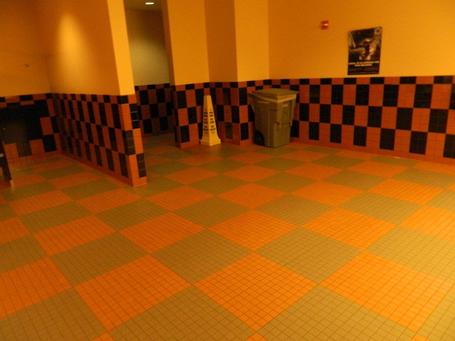 The box had open air seats so that the richy-riches can pretend to mix with the hoi-polloi.  When Maynard threw the early interception and OSU scored first the Beaver fans were pretty vocal and we all worried that it would be a long night.  We didn't hear a peep from them the rest of the game! 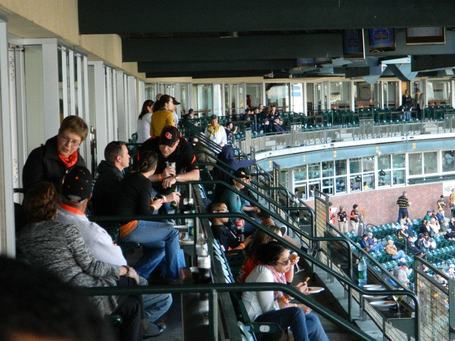 I'm usually in the lower seats, which means I can never see the band formations.  That wasn't an issue here: 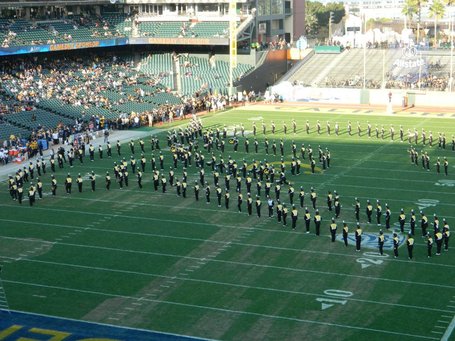 And then the game started . . . and the wireless network went down!  Come on Giants, if you're going to let AT&T put their name on the ballpark you'd better make sure the internet works!  Luckily our hosts made a few calls and got some AT&T staff to fix things.  And from that point on our noses all were buried into our laptops and mobile devices.  Avi updating Pacific Takes and SBN Bay Area.  Kodiak tweeting out the knowledge fast and furious style.  Me . . . well, just watching the game and chatting it up with the nice folks from the athletic department.  I was almost as lazy as TwistNHook!  Kodiak did take the chance to try out some of the eats down below at the club level: 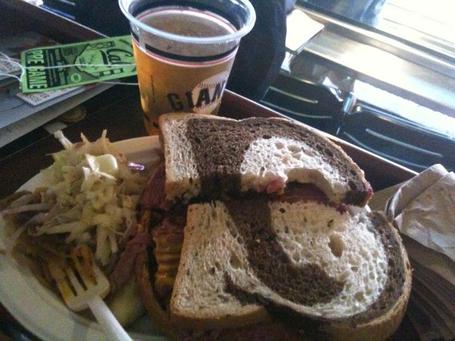 What did we learn from our experience?

-Cal athletics is pretty committed to expanding their involvement and promotion of social media, and that they hope to have more events similar to this in the future.
-Luxury booths might be best for people with short attention spans.  There's the game.  There's the other game on that one TV.  There might even be a 3rd game on a different TV.  There's the food in the box.  There's the food downstairs.  There's your laptop, fully functional.  So many options!
-If you spend an entire football game on your laptop, other people around you are going to think you're just a bit weird and anti-social.  They didn't realize how right they were!

Thanks to Cal Athletics for the opportunity to participate - we'll just keep on blogging and tweeting away!