Cal Football: A Golden Spotlight On Isi Sofele Against the Oregon State Beavers

Share All sharing options for: Cal Football: A Golden Spotlight On Isi Sofele Against the Oregon State Beavers

A steamrolling victory creates a wealth of potential focal points. Do I look at the defense coming up with two goal line turnovers? Or play the Debbie Downer card and look at our "special" teams? Maybe I could look at unicorns, the Tooth Fairy, holding penalties, and other mythical constructs. But if there's one player who has silenced the doubters and deserves his time in the spotlight - Mr. Sofele, come on down.

Let's start with The Most Important Big Play of the Game:

It's first and 10 from the Cal 3. It was a desperate time for the Golden Bears with the future hanging in the balance. Having lost six times in the row to the...Beavers(!?!?), we promptly surrendered a cheap 3 points thanks to porous special teams coverage. Given a chance to counter-punch, Maynard's underthrown interception had Cal fans everywhere reaching for the Maalox. Pinned deep in our own territory, we all prepared ourselves for stuffed run, stuffed run, then either a fumbled snap, interception, or if we're really lucky, an incompletion.

Cal comes out in 20 personnel, (2 backs, 0 TE, 3 WR). This formation forces OSU to take players away from the line of scrimmage in order to match up. They have six in the box with one safety short in run support and one deeper playing centerfield. 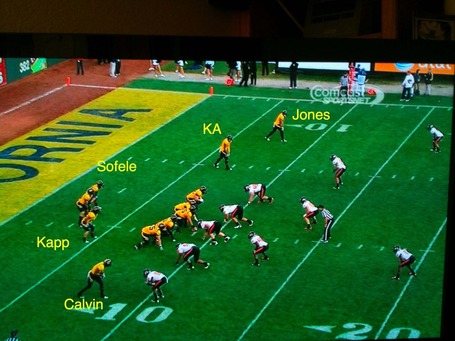 Maynard looks like he's running the zone-read. Kapp starts lead-blocking to the left. Schwenke and Cheadle charge forward to engage 2nd level blocks. Calvin releases their CB and starts heading towards the OSU safety. The OSU DE is trying to figure out whether Sofele or Maynard will get the ball. 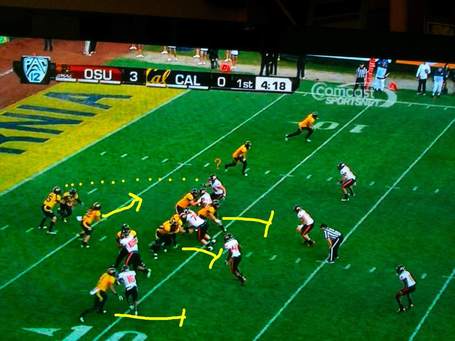 Maynard gives to Sofele, but continues sprinting to the left which forces the OSU defenders to read the action. Kapp heads towards their DE. Meanwhile, Galas seals their tackle, and Schwenke and Cheadle have their LBs locked up. 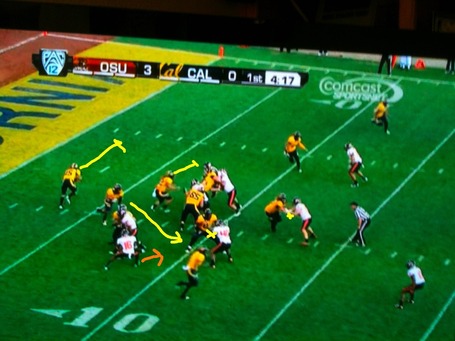 Sofele bursts through the hole created by Galas, Schwenke, and Cheadle. KA has their slot DB tied up. The CB (#16) released by Calvin has a shot at Isi... 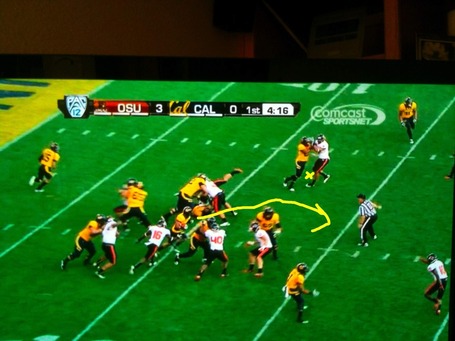 Isi runs through the attempted tackle and leaves #16 eating turf. A trio of defenders are closing in, but he sticks his foot in the ground and makes a fantastic cut... 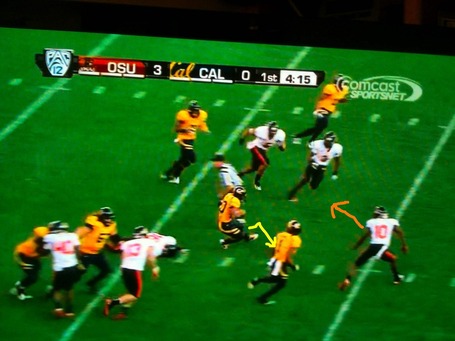 Jockstraps go flying as Sofele jukes back outside. It's all the OSU safety can do to keep his feet. 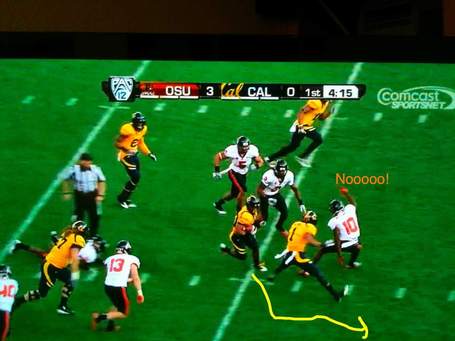 Now it's a footrace. The OSU defenders chase Sofele, but Calvin takes out the closest man and Isi outruns the rest of them until their deep safety takes an angle on him 56 yards later. It's a career-high run for Isi and a game-changer that salvages field position from the shadow of our own goal posts. 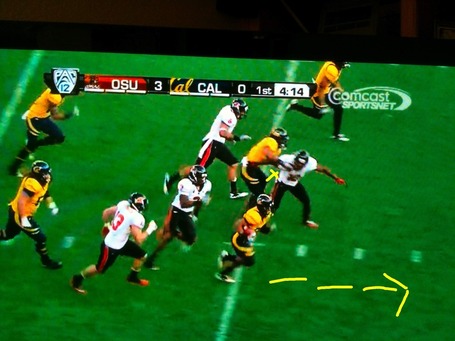 Now, we have the Coolest Designed Running Play of the Game:

It's 2nd and 16. The OSU DE just blew past MSG to sack Maynard on 1st down. Once again, Cal goes with their 20 personnel, two backs, 3WR. This forces OSU to go zone - it looks like a variant of Cover 2. 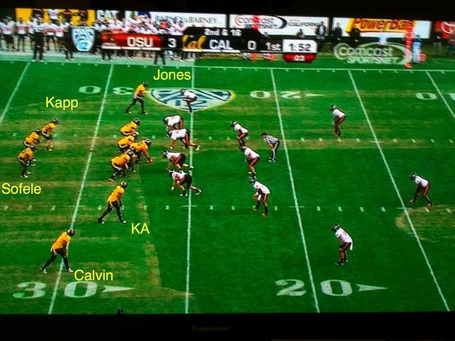 After the snap, both Maynard and Sofele sprint out towards the right. It looks like it's either a designed QB sprint-out, or another sweep to the right. Cal has run this quick outside pitch play earlier this game and in the previous two games with great success. The OSU defenders are forced to shade to the right. (bottom of the screen) 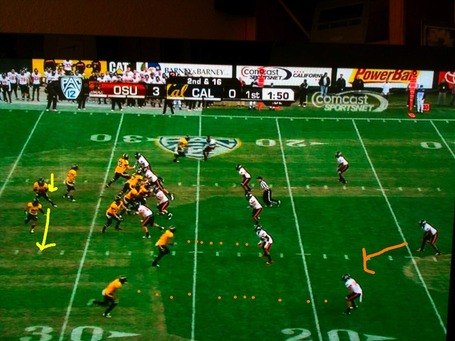 But, Sofele pivots and reverses field. Although the play started with everything flowing right, now Isi takes the hand-off in the opposite direction towards the left. It's a very slick-looking and well-executed play. Very clever of the coaching staff to take advantage of a defense keyed against the run and who had probably scouted Cal's tendency to put Maynard on the run. 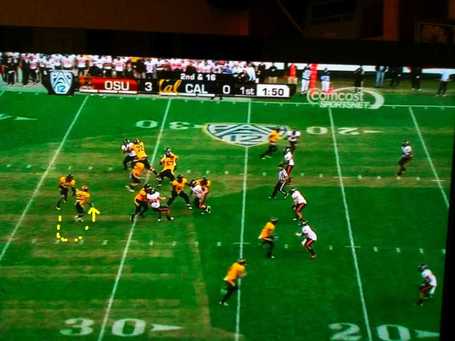 Schwartz has forced his man to take a wide route. Schwenke and Cheadle are locked up. MSG put his guy on the turf. Kapp and Galas are out in front with Jones and Calvin also engaging their defenders. 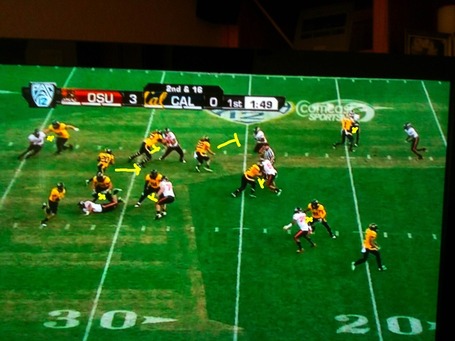 Galas starts to lose leverage, so Sofele cuts it outside. 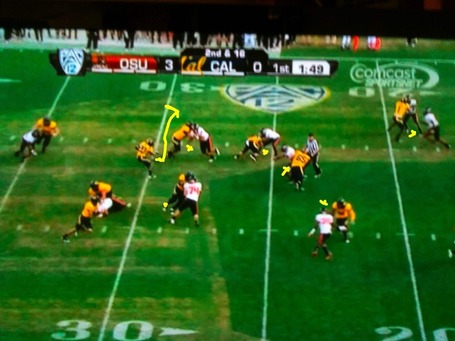 The OSU defender has Sofele squared up. 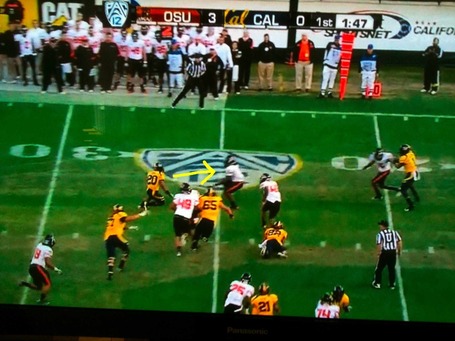 Sofele gets low. The Beaver defender hits him three yards short of the yard marker... 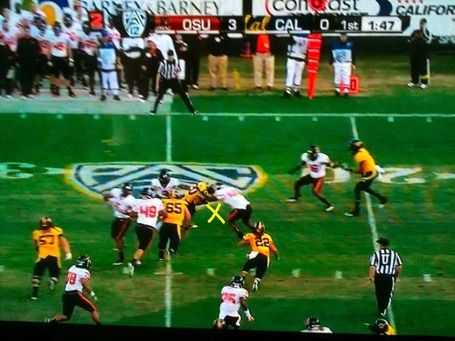 ...and Sofele goes Beast Mode on him. The OSU linebacker loses leverage and gets driven off his feet. 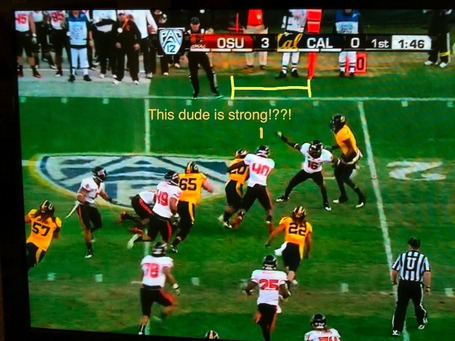 Sofele drags the OSU linebacker forward. A second defender has to jump on his back. He's already move two yards beyond the initial point of contact... 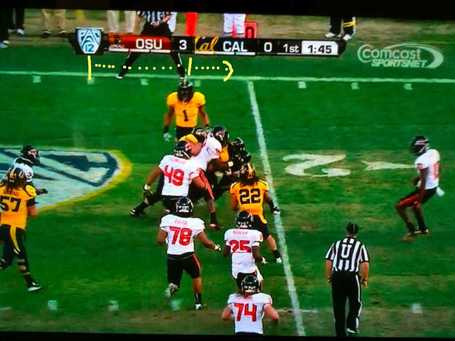 ...they still can't stop him. Sofele drags both guys another two yards until a 3rd defender has to come up and hit him. Because of Isi's extra effort, 3rd and 13 turns into 3rd and 8. The very next play, Maynard hits Calvin on the slant for Calvin's first career TD and a 7-3 Cal lead. Great play design. Solid execution. And an awesome effort from the littlest Bear to make this all happen. 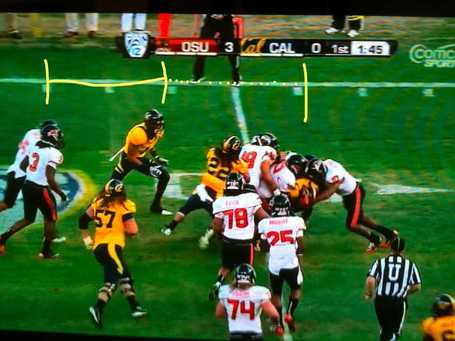 For our last play, we have The Most Fun Carry of the Day:

It's early in the 3rd quarter. Cal has a 1st and 10 at the OSU 20. Cal comes out with 11 personnel, one back, 1 TE, 3WR. OSU stacks the box with 8. They look to be in a variant of Cover 1 with one safety left back in center field. It's strength on strength. Cal shows a strong formation to the left. OSU has their defense shaded to the left. 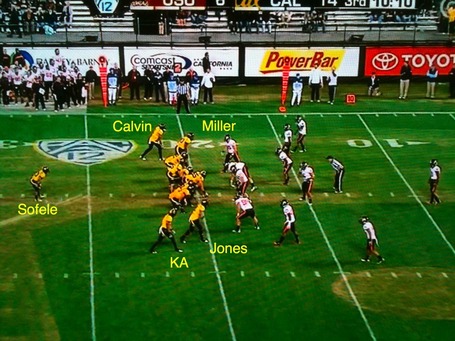 Cal isn't trying to fool anyone. Maynard pitches it left to Sofele. Schwartz pulls. Calvin moves to crack back on their linebacker. Schwenke drives forward and nails two defenders. Miller hits their DE so hard he spins around. 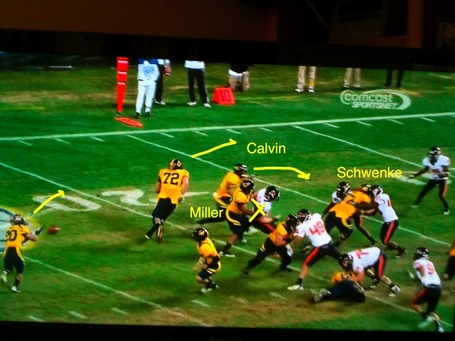 Calvin seals the edge by locking up their linebacker. Miller sustains his block by throwing the OSU defender to the ground. Schwartz is still out in front of Sofele. 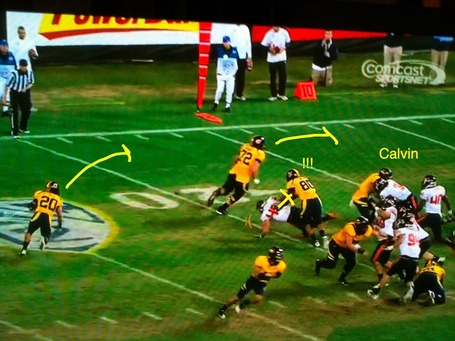 Miller isn't satisfied with just tossing his guy to the turf - he follows up with a full pancake. Meanwhile, Calvin stands up his guy and gets in the way of three additional OSU defenders. Sofele uses his speed to outrun #40 around the edge. 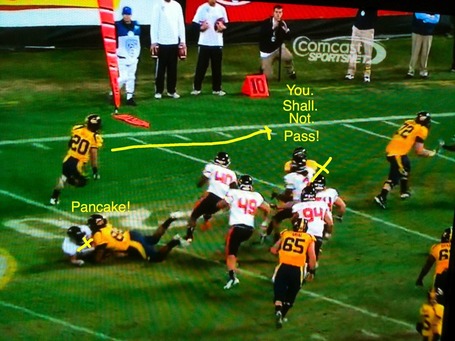 Schwartz lights up both the OSU safety and corner. Bodies fly everywhere. Sofele has an easy cutback inside towards the endzone. 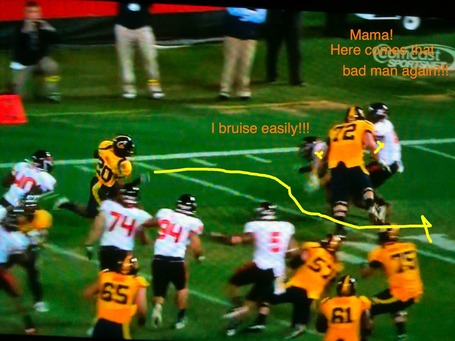 Jubilant beyond reason, Sofele celebrates his touchdown run by leaping to chest bump Justin Cheadle. The laws of physics take a deep breath... 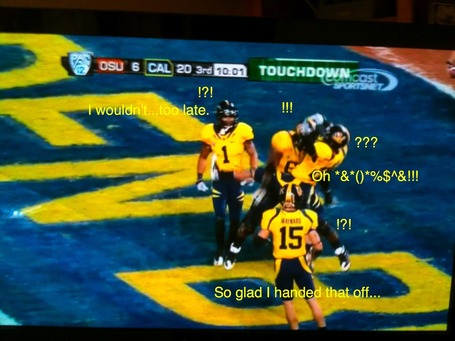 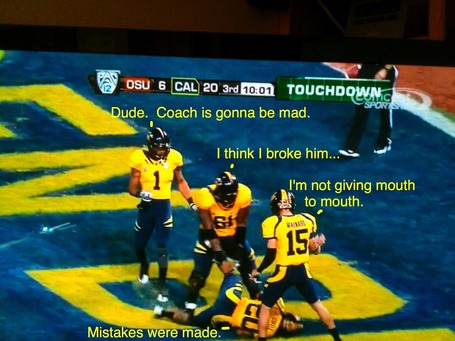 1) It was a fun win, but I can't help but worry that had we not controlled so much clock OSU's offense looked like they were figuring out how to pick us apart. They were particularly effective on the hurry-up. Doooooom?

2) Successful defense of their fake punt aside, let's not kid ourselves. We were dramatically outplayed on special teams. Playing behind the eight-ball with regards to field position will really hurt us in our next three games.

3) Zone Bustin' Part One: OSU was doing a number of clever things to get themselves free. Why did all of those underneath crossing routes keep working? Besides the fact that Rodgers/Wheaton are pretty darn fast and Mannion was accurate, they were sending their TE on an arrow route right at the same LB who was supposed to pick up the WR. The LB was left with the impossible choice of sticking the TE or chasing the WR. We'll need to work on our coverages before next week, or this blind spot will get exploited by a much better QB.

4) Zone Bustin' Part Two: Cal had some cool wrinkles of our own to take advantage of OSU's zone. The Beavers quite reasonably were paying a lot of attention to KA and Jones. To create openings, we put Jones/KA in the slot, ran them high (or deep) and then had the outside receiver (Calvin or a TE) run a quick out low (or short). This was easy money throughout the game whenever we needed to move the chains.

5) Formations: After using a lot of two-TE formations last week, Cal switched things up and went with a lot of 3WR looks. By spreading it out, OSU wasn't able to stack the box. Also, this forced their relatively inexperienced defenders to cover a lot of ground. Because we alternated between attacking the edges, hitting the middle, and showed plenty of misdirection, the OSU defenders were on their heels all game. The Beavers had to pick their poison; they either tried to cover our slot receiver with a linebacker like on the touchdown pass to Calvin, or put in a nickel back and got run over. An overlooked reason for the success of our 3WR formation was Calvin's ability to successfully block linebackers and safeties.

6) Defensive Wrinkles: I was curious how we'd react to having two of our best OLBs out. I thought it was clever to take advantage of our depth on the DLine to bring in more linemen and run more of a four-front look. It was also promising to see Coleman and Jalil getting so many snaps - there looks to be a deep rotation for our big guys. As a change-up, I also saw Pendergast line up an OLB over their center while moving our DT outside. This essentially dared them to run...and they couldn't. On the other hand, they didn't know whether we'd be speed-rushing with our LB right up the middle, or running some type of stunt.

7) Twenty point underdogs? In the Big Game? If that isn't locker room material, then you might as well bull-doze Memorial right now. Stand up, gentlemen. We still believe in you. Go Bears! Beat Stanfurd!