Last we left, Cal was up 14-6 at halftime over OSU. OSU had scored a field goal to get some momentum back right at halftime. However, Cal seemed to generally dominate the game and the OSU team that marched off the field did not seem particularly enthusiastic about its play so far. 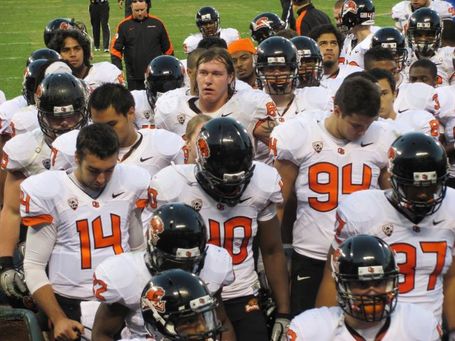 Fortunately, they would not have many more reasons in the second half to feel enthusiastic, either. GO BEARS!

First, the marching band was up to do its thing:

At halftime, they honored some former Cal greats, including Deltha O'Neal! 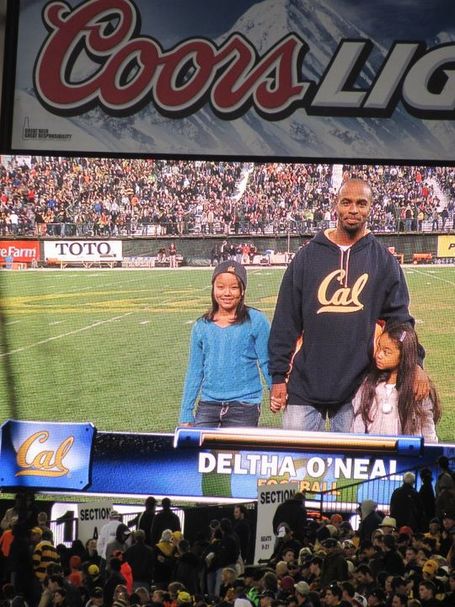 If you've ever seen Mike Riley without the hat, it's a very odd situation. He looks totally different. The Oregon State hat takes like 20 years off his appearance. 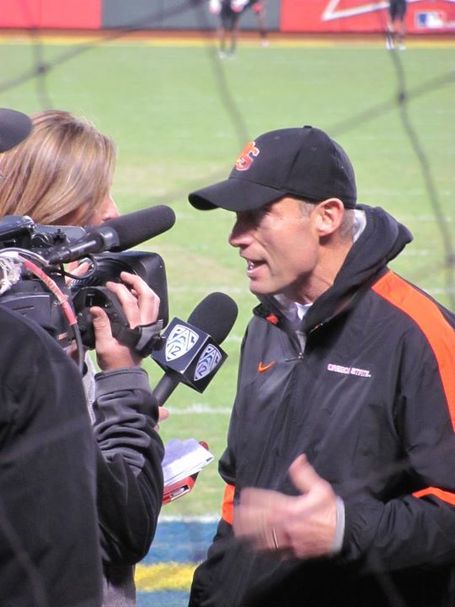 And we're back to game action! 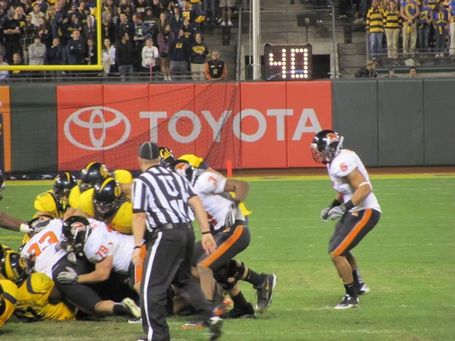 Here, Isi Sofele scores a TD that was NOT called back for a ticky tack holding penalty! In his excitement, he leaps into the air to celebrate with Olineman Justin Cheadle. 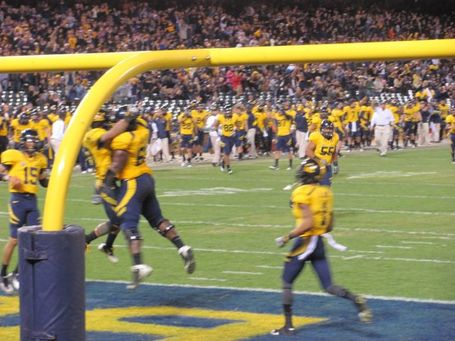 Sofele loses that battle and falls back to the turf. Cheadle has to help him up! 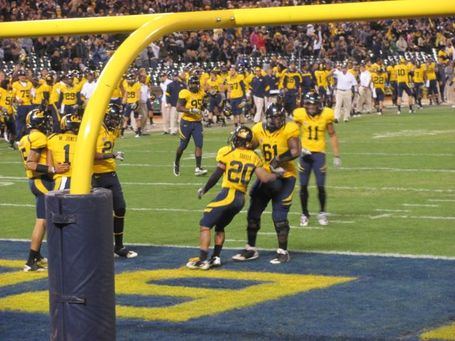 Here, Joe Kapp talks about his decision to go to Cal and his time at Berkeley. 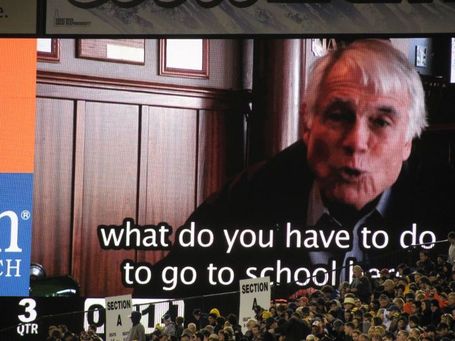 I wish I could put this photo in an art gallery, so I could write the following standard issue bullshit art critique:

This photo is a haunting and poignant reminder of the impermanence of life. Whether you are talking scoring touchdowns or making money, you experiencing the illusory, easily taken from you at any moment without any warning. Truly, this photo is a reflection about the only real item of genuine value in this world: love of friends and family.

Seriously, though, Maynard just looked sad standing next to this flag, while everybody else celebrated (for the moment) a TD. 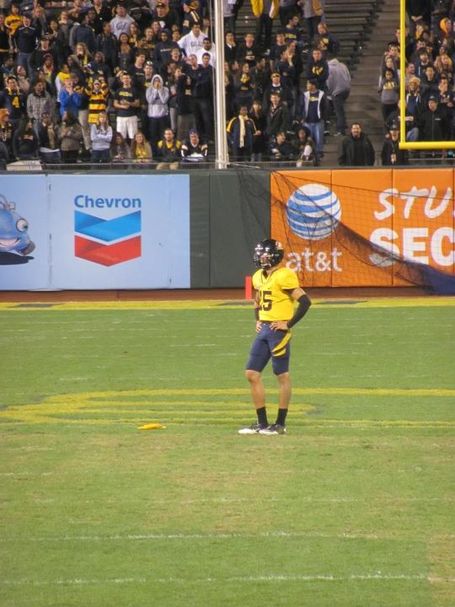 But it wasn't just the offense that was putting the screws on OSU. The D had its moments. Like this drive here: 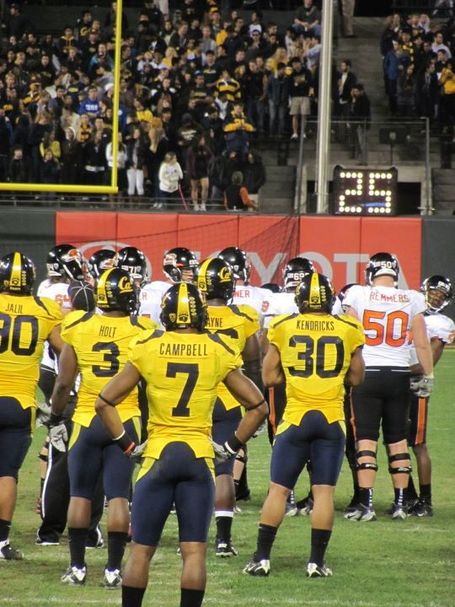 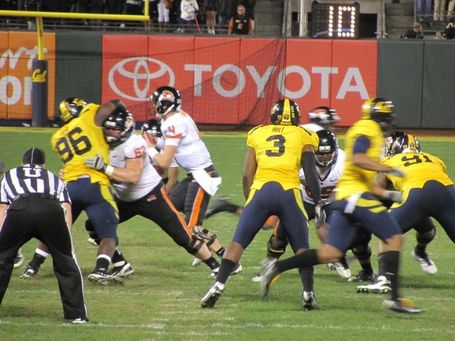 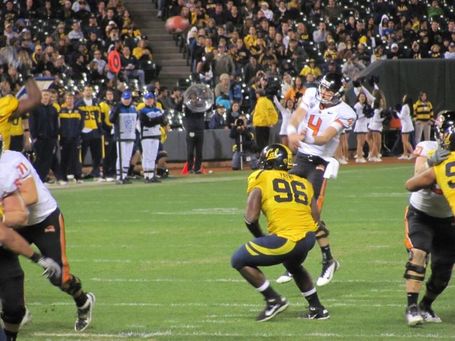 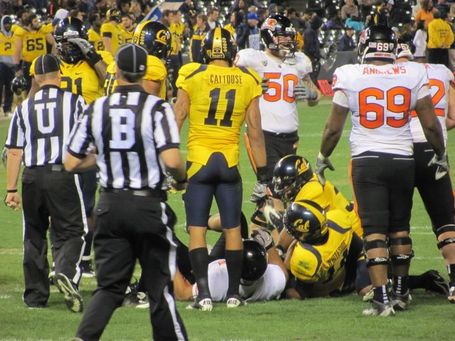 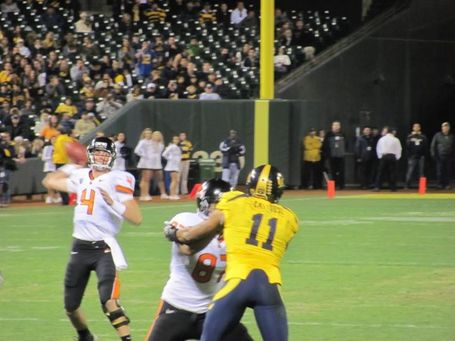 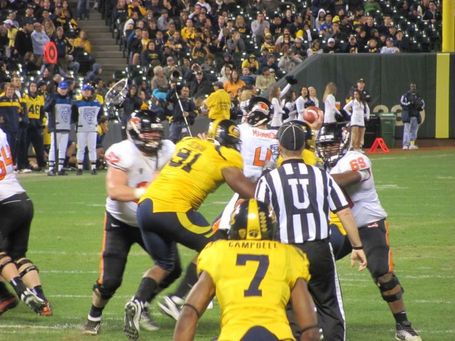 OSU did finally make it all the way down to the goal line. Down to the 1 yard line. But on first and goal, the RB got stuffed. 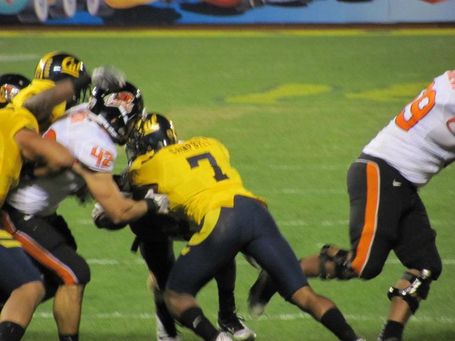 On 2nd and goal, a QB sneak went nowhere. 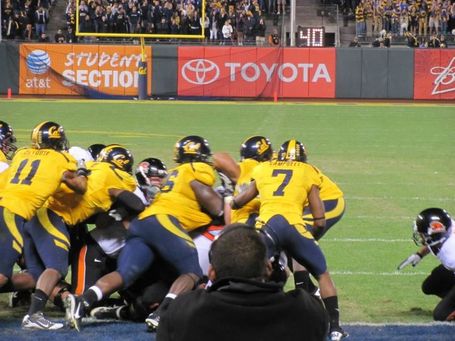 And on 3rd and goal (as you can see by this poorly framed shot), the ball popped loose on the hand off and Cal recovered. I actually didn't realize that, because it was blocked by the giant wall of humanity. So, I got confused when the team went CRAZY when we (my perception) stuffed the RB on 3rd. I thought we still had to stop them on 4th, not realizing Cal had taken over. 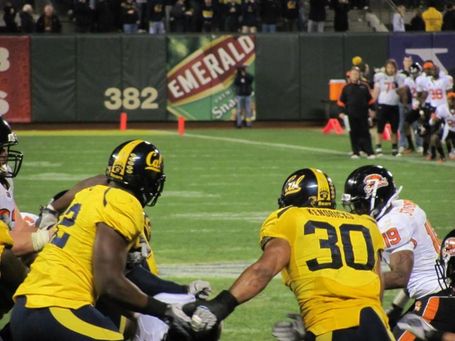 And so we had the ball back! And OSU turned the ball over twice at the goal line. They out-Caled us! 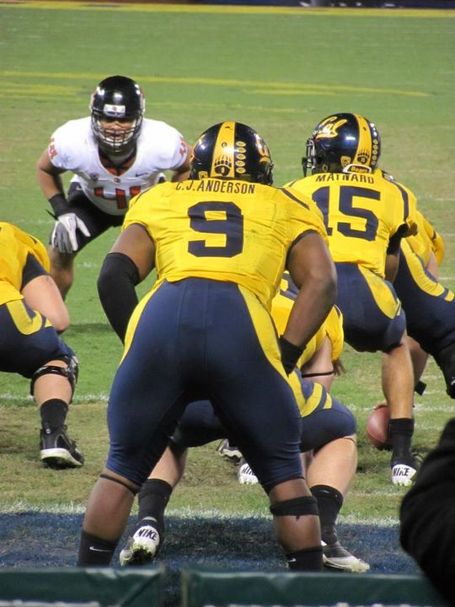 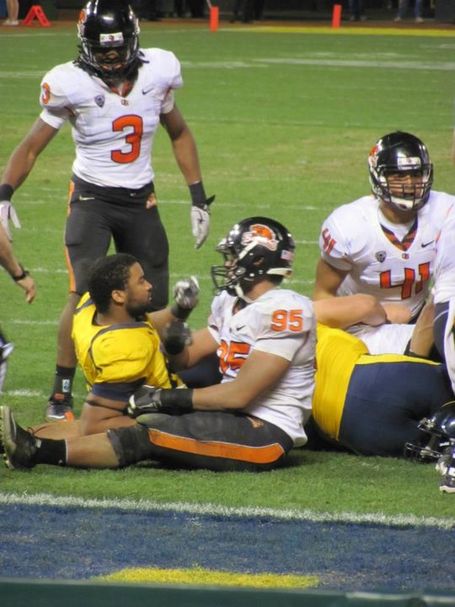 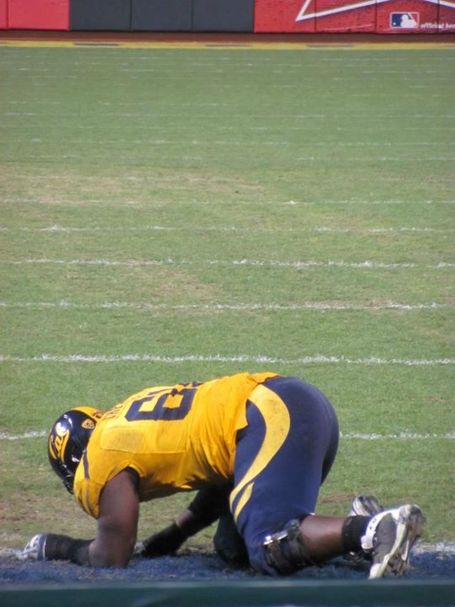 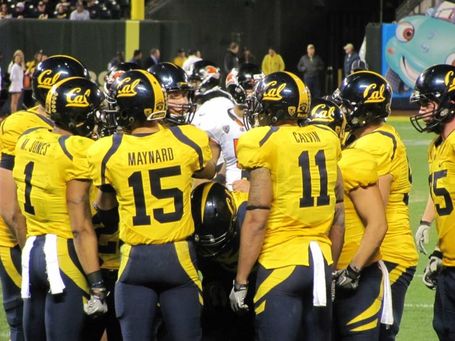 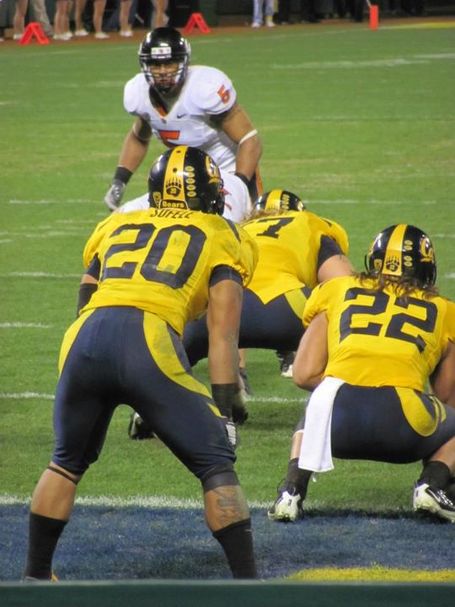 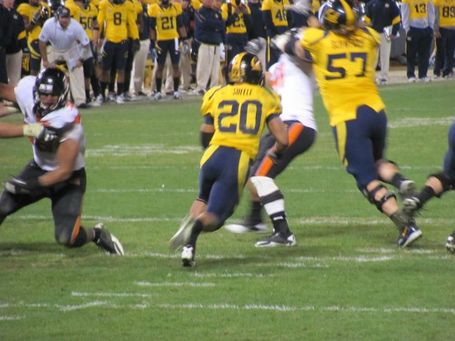 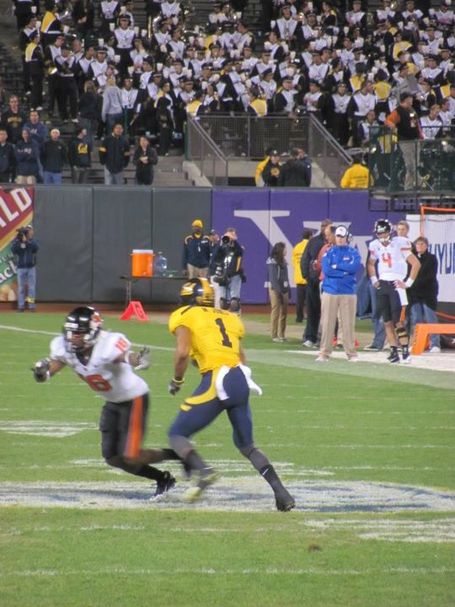 Cal had a great drive after that turn over, if I remember the gameflow correctly. They slowly marched down the field, eating up HUGE chunks of time. We only scored 3 points as many TDs were called back for holding penalties. However, that really wasn't even the biggest focus. Taking the time off of the clock was the bigger focus there and Cal was very successful with that. 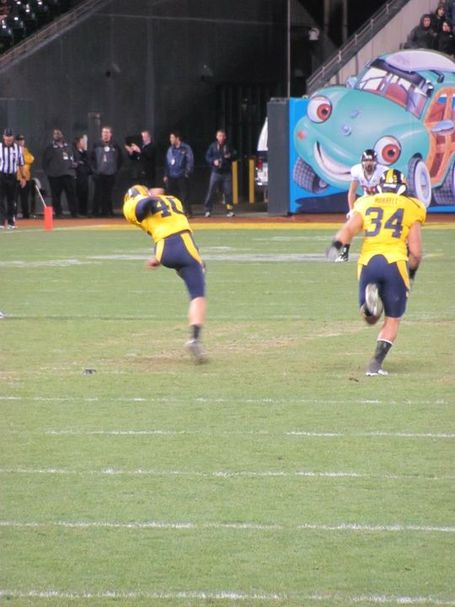 What is this guy pulling??? 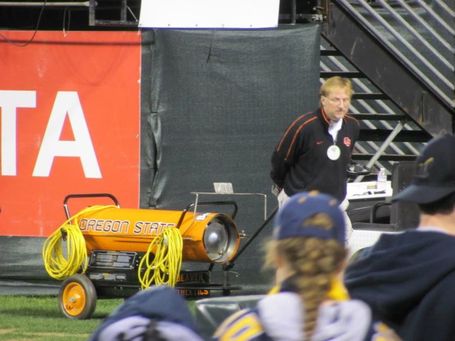 Soon, the game was over and Cal just had to stand around waiting for it to end. 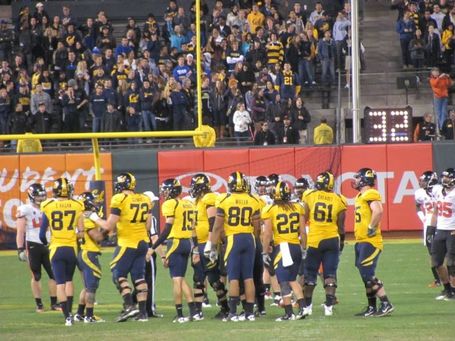 Handshakes! Riley has state troopers that follow him around. Where are Tedford's troopers? 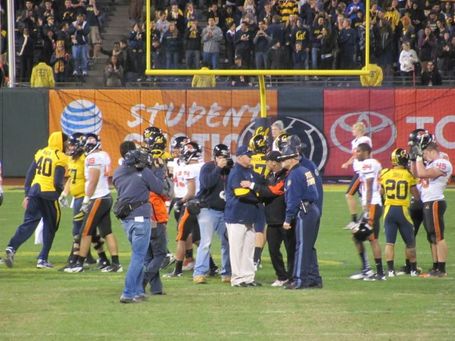 A nice receipt in the final home game at AT & T ever (hopefully!) for Cal! 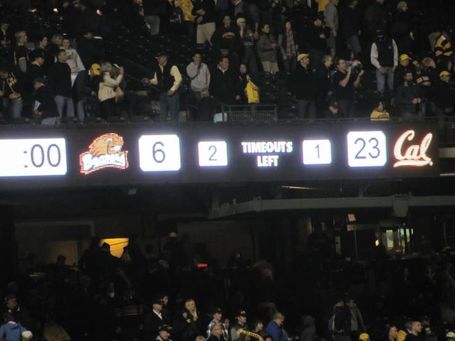 Now that we have had all of our AT & T games this season, what are your thoughts on your experiences there? Good? Bad?