Last year through nine games, the California Golden Bears stood at 5-4 overall after a win over Washington State and needed only one more win to secure an eighth straight bowl appearance under Coach Jeff Tedford. The hardest one to get, however, was the last one: Cal lost three straight games and finished with a losing season for the first time during Tedford's reign as the Bears' coach.

One year later, and here we go again. Through nine games, Cal is again 5-4 overall (2-4 in the Pac-12), is coming off a win over Washington State, and needs just one more win to secure bowl eligibility. The Bears hope that the end of the 2010 season doesn't repeat this time, however, as they look to clinch bowl eligibility today against Oregon State (2-7 overall, 2-4 Pac-12) at "home" at AT&T Park.

But never mind Oregon State's 2-7 record. This game is one that will give any Cal fan heartburn. Cal has lost four straight to the Beavers and has gone 2-7 against them during the Jeff Tedford era (2-6 against Oregon State coach Mike Riley). And with bowl eligibility at stake today, seeing the Beavers roll into town is enough to make you say, "here we go again" and think of Whitesnake.

Though I keep searching for an answer
I never seem to find what I'm looking for
Oh Lord, I pray you give me strength to carry on
'Cause I know what it means
To walk along the lonely street of dreams
-- David Coverdale (Whitesnake), Here We Go Again

Can Cal find the answer it has been searching for against Oregon State? Or will today's game be another in a lonely street of dreams streak of losses to go along with 2007 (falling to OSU when Cal was ranked # 2 in the country), 2008 (when special teams failure cost Cal a chance for an upset), 2009 (Jahvid Best's horrific injury), and 2010 (when OSU ended Kevin Riley's career)?

This is your official game day thread. Use this as your pregame open thread. Watch above and in the comments for the link to the first quarter thread when the game starts. There will also be links here to subsequent quarter threads to follow the in-game action.

Need an internet stream? As usual, prd74 has hooked us up:

As for the game itself, what can we expect? norcalnick previewed the Oregon State defense and how the Cal offense might match up.

"But Nick" you ask, "Surely Oregon St.’s run defense should have an advantage because they know we want to run first, so they’ll stack the box and force Maynard to throw!" Well, that’s a fair point, kind reader. It was my concern as well. But there’s two reasons that doesn’t scare me. For one, our WRs are just too good to allow a team to truly stack the box. KA21 will make you pay.

For another, look at OSU’s game against Utah. The Utes without their starting QB have to be the prototypical ‘stack the box, force them to beat your through the air’ team, right? Yet against the Beavers John White carried the ball 35 times for 205 yards while Jon Hays threw for 62 yards on 16 attempts. Utah ran the ball SEVENTY FIVE PERCENT OF THE TIME and still Oregon St. couldn’t stop them. Color me unimpressed.

Beyond that iffy yards/attempt, Oregon St. has allowed opponents to complete 64.5 percent of their passes, which is pretty bad. That implies to me that the defense tends to play back but allows receivers to come open underneath. That the Beavers have been reasonably successful at preventing big pass plays despite games against Andrew Luck, and Russell Wilson adds some credence to the idea.

But in the end it’s the same story as the UCLA and Washington St. games – guys will be open. If Utah/Wazzu Maynard shows up we’ll move the ball. If USC/UCLA Maynard is on the field we won’t.

So that's when Cal has the ball. What can we expect when the Beavers have the ball? Oregon State starts a redshirt freshman at quarterback, Sean Mannion, a Bay Area product from Foothill H.S. in Pleasanton. ManBearCal previewed the Oregon State offense and gave a scouting report on Mannion:

Mike Riley was quick with the hook, yanking last year's starter Ryan Katz (or as my Beaver buddy likes to call him..."Bag o' Dead Katz") just one half into the season opening upset loss at the hands of the mighty Sacramento State Hornets. Since then, the keys to the Beavermobile have been in the hands of Bay Area native, redshirt freshman Sean "Now You're a" Mannion. He's done a decent enough job too, throwing for 2447 yards, 11 TDs and 13 INTs on 64.3% passing. Thirteen picks is a lot though. Why, that's three more than Zach Maynard has thrown! And like Maynard, Mannion has had a couple solid games, a few "meh" games, and a couple awful ones. He was great against Wazzu, throwing for 376 yards, 4 TDs and 1 INT. Oh, and he completed 76.5% of his passes in that game. He was awful against both Utah and ASU, throwing 7 picks in those two games alone. But he's only had one outing where he completed less than 60% of his passes (55.1% @ Utah). That's better than Maynard's season average (53.7%). Just sayin. He's unlike Maynard in that he's a bigger body guy who's not real mobile. He's most comfortable in the pocket and he's got a big arm. He'll roll out on occasion, but is really no threat at all as a runner. UNTIL SATURDAY WHEN THE BEAVERS UNVEIL THE PISTOL!!! Mannion looks like he'll be a hell of a QB in the coming years for the Beavs, but he's not there just yet.

Expect Mannion to chuck the ball around a lot. He's got two very good receivers and a solid tight end. His line is a bit dinged up, and his running game is pretty poor by Beaver standards. We did a great job against a very similar offense last week vs Wazzu, so I think that unless Oregon State has a lot of early success with the run, we'll be playing a good amount of the same 2-4-5 alignment that we did against the Cougs. Lobbestael and the Cougar passing attack was statistically better than Mannion and the Beavs, but I don't think that means a damn thing. This is OSU we're talking about, and we will potentially be without the services of two of our best pass-rushing OLBs in Chris McCain and Dave Wilkerson. Since we always have to find a way to lose to the Beavers, expect us to not sack Mannion once, and he'll miraculously not turn the ball over at all. Career days all around. DOOM SHAKA LAKA!

"DOOM SHAKA LAKA"? Sounds like someone is trying to appease Juju. I'm okay with that. Cal needs all the help it can get against Oregon State. With that in mind, let's channel the last guy who led Cal to victory over Oregon State, way back in 2006. Maybe that will give the Bears good vibes. 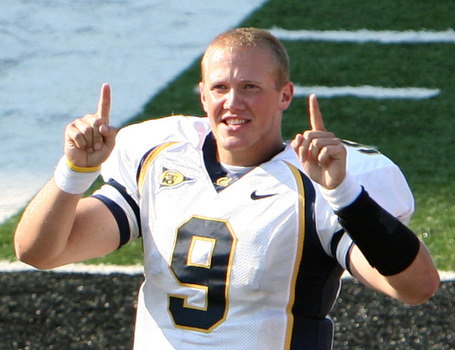 Remember me? I beat Oregon State.