Cal Football: A Golden Spotlight on the Pistol vs. the UCLA Bruins

Share All sharing options for: Cal Football: A Golden Spotlight on the Pistol vs. the UCLA Bruins

The writers at CGB realize that we have reputation to uphold. No matter how dismal or dark the hour grows, we somehow find a way to keep the sunshine pumps on overdrive. And so it was with a heavy heart and several adult beverages that I looked to the game film and tried to find a way to put lipstick on this pig. Sorry, folks. No manner of uber-make-over could make this swine any less hideous...so I punted barbecued.

UCLA goes 11 personnel, 1 back, 1 TE, and 3 WR. Cal counters with a Cover One zone look. Campo is lined up over their innermost slot receiver. Cattouse is playing zone behind Anthony/Campo and matches up with their middle receiver. Campbell is deep in centerfield. It's a bit of an odd choice schematically because you have your best corner (Williams) in run support, and you're leaving your LB/S lined up against two WRs. 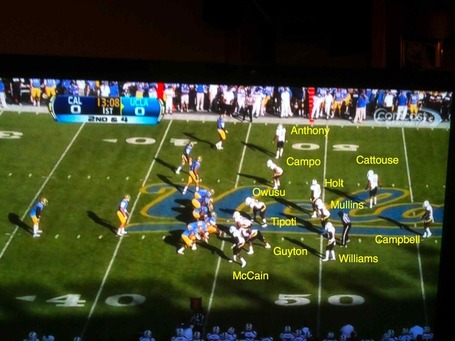 It looks like a run out of the Pistol. Cal is rushing four. Campo rushes instead of dropping into coverage. The Cal middle linebackers maintain spacing and gap responsibility. The Cal secondary drops into zone coverage. 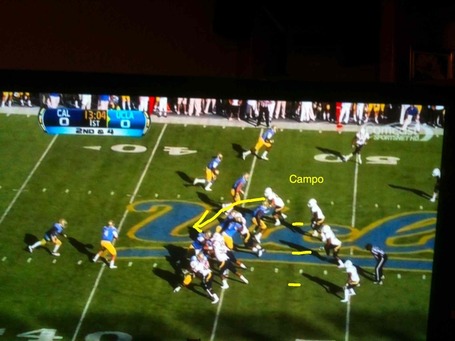 Campo comes crashing down inside on the running back. The rest of the line is locked up with the Bruin Oline. Prince reads Campo and decides to keep it. 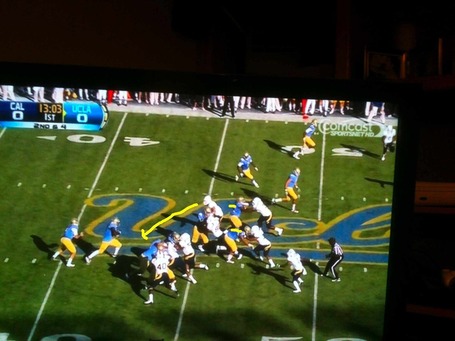 Prince pulls it back and starts off running to the outside. Holt starts drifting laterally, but gets crack-blocked by a Bruin wide receiver. Cattouse has responsibility for the quarterback. 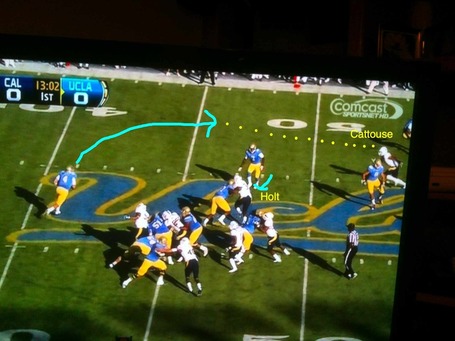 Cattouse reacts decisively, takes a good angle, and makes a sure tackle to stop Prince for no gain. Sadly enough, this play may have put us over our quota for stopping the opposing quarterback on Pistol keepers. 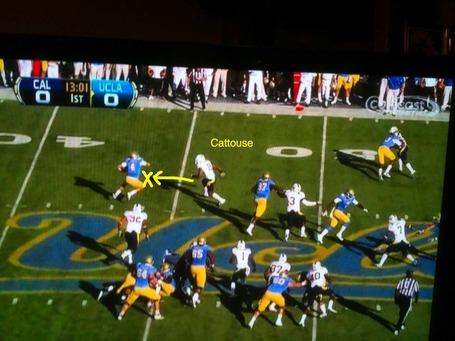 Pistol, part deux. UCLA is again with 11 personnel, 1 back, 1 TE, and 3WRs. Cal is still in a Cover One look with Cattouse matched up on their slot receiver. 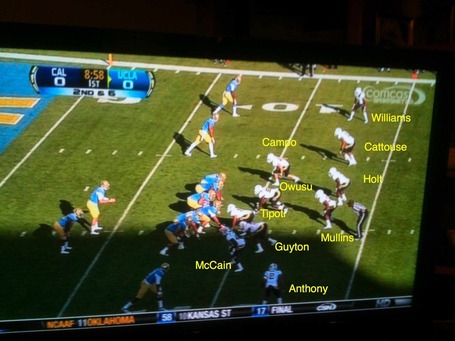 Guyton is left unblocked and comes crashing in to tackle the running back. Prince reads Guyton and decides to keep it. Meanwhile, Cal's middle linebackers have drifted too far to the strong side... 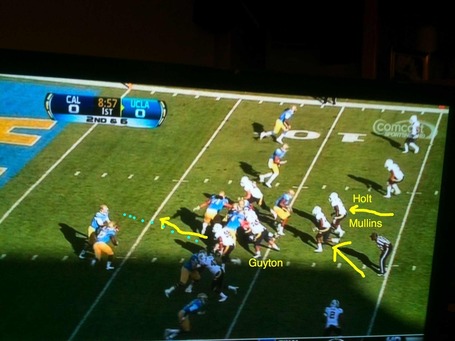 Prince keeps the ball and takes off. McCain can't get off his block. Mullins is now out of position and is caught up in the wash. 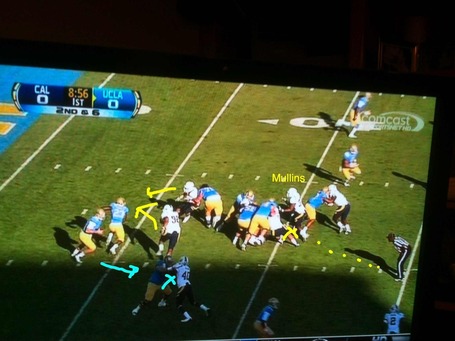 Prince has a wide-open running lane. The safeties and corners are still caught up in coverage. 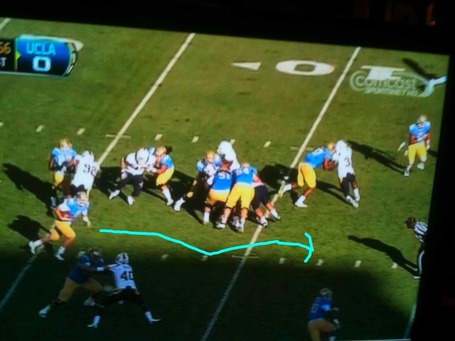 Ten yards down the field, Campbell and Cattouse converge on Prince. 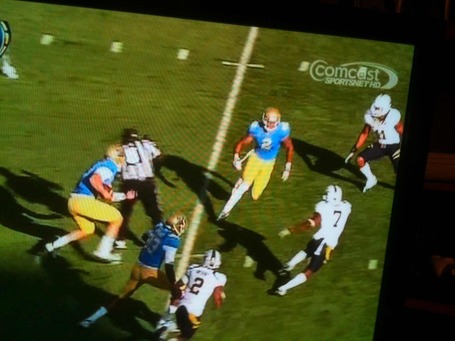 Campbell is blocked out of the play. Cattouse misses the tackle. 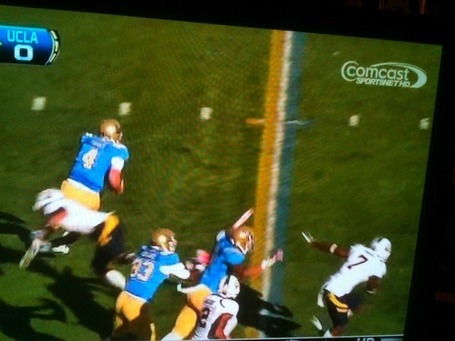 Prince runs another 10 yards, then drops the ball before Williams can tackle him. For those of you scoring at home, this was the same scheme as the earlier stop, but less than ideal execution. 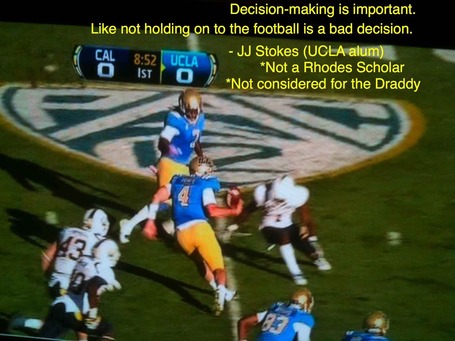 After cleverly lulling UCLA into a false sense of security by allowing their slow-footed quarterback to rumble twenty-yards. The Cal offense took advantage of Kevin Prince's fumble to set-up shop for the Best Offensive Sequence Of The Day.

1st and 10: 5 yard pistol run up the middle with Sofele

2nd and 5: Play-action fake, roll out left, Miller with the one-handed grab to set up 1st and goal

1st and goal: Pistol, play almost blown up from a missed MSG block. Maynard scrambles to the 1.

3rd and goal: Pistol give to Sofele off-tackle and he runs over the linebacker for the score. 7-0 Bears!

Let's take a closer look at how Cal Offense fared the rest of the day:

1) The guys just weren't in the proper mindset for this one. We're not good enough to come out and expect to just sleep-walk over another Pac-12 team. There was almost a sense of "any second now, we're going to flip the switch." That's on the coaches and the team leaders. We know that Tedford's just not a rah-rah guy. Fine. We figured out the past two years that it's a poor fit when he tries to emote and headbutt players. It sounded like Coach Blasquez had done a great job of addressing team chemistry, mental toughness, and accountability during camp. Either it takes more than one year to turn things around, or perhaps there's still an inherent systemic issue.

2) Maynard's big mistakes were particularly noticeable and memorable. But, guys were making execution errors all over the field. UCLA wasn't doing anything fancy on offense or defense. We lost too many one on one battles. In particular, our tackles let their defensive ends run right by them, we got little push up the middle, and our TEs missed blocks on the edges. The inability to run the ball in short yardage situations was highly disappointing and may have influenced the playcalling. On defense, players took turns taking bad angles, blowing gap assignments, and struggled getting off of blocks. In stark contrast to last week, our Dline lost the battle of the trenches. And on the perimeter, their receiving corps and tight ends man-handled our guys all day.

3) The coaches didn't do the players any favors in terms of preparation or with putting them in a good position to succeed. Like he did against Nevada, Coach Pendergast seems to have made a number of fatal assumptions with regards to what our personnel can and cannot do. In some ways, he out-smarted himself by devising an aggressive scheme designed to get TFLs. By sending a defensive end or OLB crashing inside against their RB, it might give you a chance at a big play. But, this assumes that your MLBs and safeties will be able to make the right read and get to the edge in time. More often than not, this just wasn't the case.

4) Round peg. Square hole. Throughout his tenure at Cal, Tedford has been enamored with the dual-threat quarterback. He's brought in athletes like Kyle Reed, Joe Ayoob, Brock Mansion, and now Zach Maynard. In theory, the ultimate college offense is one where the defense has to account for the quarterback instead of having an 11 on 10 advantage. But, not every running quarterback is going to be Tim Tebow, or Cam Newton. And, neither Tebow nor Newton were asked to run the Tedford offense. Is it possible to recruit and develop that type of player at Cal? Maybe. But the odds are apparently against us. If we're going to run a pro-style offense, let's use a pro-style quarterback. If we're going to commit to a spread-style pistol attack, then we need to go all in and run it more often instead of as a change-up. It feels like in trying to do both, we're not able to consistently execute with either style.

I don't think it's in Tedford's comfort zone to abandon his pro-style playbook - so let's stop kidding ourselves. We're a pro-style team. If that's our identity, let's recruit players who fit that style of play instead of trying to mold athletes into something that they're not. If this truly is the twilight of the Tedford era, we'll remember one of the key criticisms was the recruitment and development of the quarterback position.

5) Sometimes, words fail. This game epically stunk. It was perhaps one of the most disappointing efforts that we've seen in the past decade. I'm sure that the players and coaches are as upset and embarrassed as the rest of us. It's on them to decide whether this failure breaks them, or whether they use this as a rallying point to turn it around. As fans, we're at a similar type of crossroads. Some folks only follow the team when they're doing well. Others have a strange fixation on only discussing the team when it's doing poorly. And then there are the sorry Old Blues who may very well be the most confused souls on the planet. Even so, there's something to be said for laughing at Fate, damning the torpedoes, and embracing the unique agony of Cal fandom.

At this point, I simply do not know which way this team and program are headed. Either way, I'll still be proud to be a Cal Bear and I'll be watching every potentially horrifying moment. Go Bears! Please for the love of Oski, let's beat the Cougars.