To discuss all of Saturday's action, check out the gamethreads by scrolling down the front page of CGB or clicking one of the three links: Morning, afternoon, evening games.

To transition away from the Cal-Oregon defeat this weekend for a bit, let's talk the recruiting game. Yes, there's an offensive line update or two, although nothing that'll make you go wow wow wubbzy (and I doubt that'll change much for the next six weeks). But as a bonus, I've linked to video of these guys in their names! Click on the names to watch the highlight reels of the prospects!

View an extensive list of Cal targets on the Golden Recruiting Board! I'll try and get it up-to-date this weekend.

Aziz Shittu, DT, Buhach (Atwater, CA) has a lot of schools interested in him. Has a current top 3 of Cal, Nevada, and Texas A&M according to Dan Hixman of the Reno Gazette-Journal. Cal coaches watched him ($) at a Buhach game during the bye week (and were probably also there checking out his teammate Matt Cochran).

Shittu has also received an invite to the US Army All-American Bowl.

Adams also was named a US Army All-American, along with his teammate Jordan Payton.

After the jump, find out which quarterback Cal has offered! 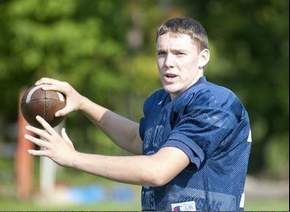 Coaches [and Diggs] offered their opinions on Marshall in a Maryland Gazette article.

"Quarterback is the most important position on the field," Kinnan said. "A quarterback can turn a game around by his play. Brendan made some key throws in critical situations with great accuracy. The accuracy is what won the game for Good Counsel. When his receivers were open, he delivered a catchable ball to them and they did the rest."

Poggie said, "He can get the ball to them on deep throws and he throws the slant very well."

"We brought a lot of pressure on him and we nailed him a lot of times but he hung in there and played really well. He has a big athletic IQ. He understands the game. He has a point guard kind of aura on the football field in how it relates to control and understanding. He is pretty much a complete package."

"He can put that football really anywhere on the field [and] he’s very smart," Falcons coach Bob Milloy said. "There are a lot of plays he’s checking [at the line of scrimmage] and … trying to get us out of a bad play and into a good play. We’re very pleased with his progress."

Stefon Diggs, ATH, Good Counsel (Olney, MD) profile on MaxPreps indicates that one of the top recruits in the country would prefer defense over offense. Cal [thanks to Tosh] has his first official visit.

"I actually prefer defense," said Diggs, who is known for his bone-jarring hits and making acrobatic moves to knock down passes. "I love offense to death because that's what I'm best at. But I love defense, that's where my heart is because you can make a big hit. On offense you can score, but defense wins games. When the defense comes together it looks good."

Matt Cochran, OL, Buhach (Atwater, CA) committed to Auburn. JUST KIDDING!  Shittu (who is a bit of a jokester) underestimated the power of the Internet when he played his little prank on his teammate. Cochran is setting official visits. He'll be visiting UW on October 29th, and will be coming to Cal on December 2nd as the Pac-12 regular season concludes.

Cochran was chosen by the Marines to play in the Semper Fidelis All-American Bowl in Phoenix on January 3rd.

Aaron Cochran, 2013 OL, Buhach (Atwater, CA) is Matt's younger junior brother and the second anchor of the offensive line. At an impressive 6'8", 340 pounds, he could be another player the Bears have their eye on a year from now. Oregon is the school he likes the most right now, but he could take a visit to Cal with his brother.

Ifeadi Odenigbo, DE, Centerville (Centerville, OH) has Cal in his top 5. This ESPN recruiting profile reveals a kid wise beyond his years.

Set to graduate in the spring, Odenigbo has a 3.2 GPA and doesn't plan to use his football scholarship as a means of just getting to the NFL. Odenigbo, who has offers from nearly all of the country's elite programs, has cut his list to five schools. When first looking at his list, it would appear Odenigbo is going to college on an academic scholarship, not football.

"The NFL should be called 'Not For Long,'" Odenigbo said. "The average career is three years. I can just blow out a knee and be done.

"To be honest, I'm not the smartest person. I can get into schools my friends can't get into with 4.0s," said Odenigbo, who wants to study computer science and eventually work for a major Internet company such as Yahoo! or Google. "My mom is a physician and my dad is an engineer, so I have a lot of expectations. A full scholarship to those schools plus good football programs -- I'd be crazy not to take it."

Su'a Cravens, 2013 LB/S, Vista Murrieta (Murrieta, CA) plays running back, wide receiver, linebacker and safety for his Broncos, and was offered by Cal after a MONSTER game (rushing TD, receiving TD, interception, sack) against Crespi--secondary coach Ashley Ambrose was in attendance at the game. It's the 16th offer for the junior, who Adam Gorney of Rivals dubs the best California recruit for the 2013 class.

Chris Harper, WR, Crespi (Encino, CA) names a top three of Cal, Colorado and Oregon. Harper has offers from one of the three schools, but could possibly pick up offers in the process.

Jordan Payton, WR Oaks Christian (Westlake Village, CA) could be announcing within two weeks according to the announcers covering Payton's game on FSN. Payton had Cal & Michigan in his top two, but it looks like he's leaning toward the Maize And Blue .

Freddie Tagaloa, OL, Salesian (Richmond, CA) visited Eugene this weekend for the Cal-Oregon game. Justin Hopkins of Duck Territory said he was having a good time in Eugene. No word yet on whether it was a real good time.

Tagaloa has had a top four of Stanford, Cal, USC and Oregon (in no particular order). No reason to be alarmed, since no breakdancing under a highway overpass was reported.

Taylor McNamara (Arizona), TE, Westview (San Diego, CA) will be taking his official visits to Notre Dame (during Boston College weekend), Cal and Colorado at some point. The Wildcats commit had to postpone the Colorado trip because of the flu.

Jaydon Mickens (USC), WR, Dorsey (Los Angeles, CA) will take his officials to ASU, Cal, Hawaii, Oregon and Washington according to the WeAreSC staff. Mickens had to fill in at at quarterback this season to help keep Dorsey afloat.

Football coach Jon Mack touts his footwork more than he gushes over his bone-crushing strength.

"Jordan is an incredible athlete. He's very nimble with great hands. He could play a lot of positions," said Mack, who has coached four different players who moved on to the NFL. "You take a great athlete and you put him on the O-line and he can be dominant. His ability is what sets him apart. He pushes everything out of the way."

"It was playoff atmosphere," the 6-foot-4, 310-pound prospect from Washington (D.C.) Friendship said of his visit to Tallahassee, Fla., last month for the Oklahoma game. "It was to the point where it was past passion. People were standing the whole game. That's how loud it was. They lost, [so] it could have been better, but other than that it was great."

Cal is one of his top seven schools. Goldman was also named to the Under Armour All-America Game.