For the second night in a row, ESPN puts a West Coast matchup on national television. Tonight, it is 5th-ranked Boise State at Fresno State in a matchup of former WAC brethren down in the San Joaquin Valley.

(What was last night's ESPN game anyway? I forgot.)

If you want a preview and analysis of Boise State vs. Fresno State, you've come to the absolutely wrong place. You want football content? You want analysis of this Battle at Bulldog Stadium? It's up to you to provide. This is your open game thread. Talk about the Broncos and Bulldogs until your hearts' content.

Or, since it's Friday night, talk about high school football if you want. I don't care. Heck, I've got my eye on Dublin (OH) Coffman vs. Hilliard (OH) Darby tonight. I'm rooting for the Shamrocks try to stay undefeated against the visiting Panthers. Hopefully, Coffman won't get caught looking ahead to next week's showdown against two-time state champion Hilliard (OH) Davidson! But I digress.

Okay, so I won't give you a detailed (much less intelligent) breakdown of Boise State against Fresno State. But what I will give you here is a tale of the "what are we famous for" tape. I have chosen an iconic symbol of what Boise State and Fresno State are most known for. What wins?

In this corner, the infamous blue turf (aka "Smurf Turf") on Boise State's home field at Bronco Stadium. 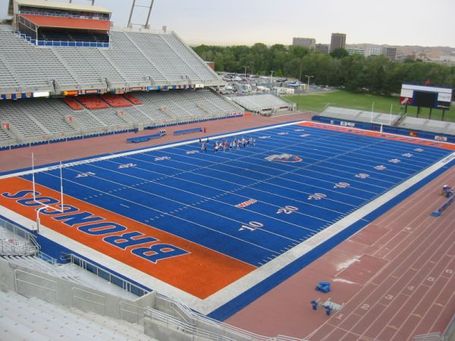 And, in this corner, the iconic totally awesome mustache of Fresno State head coach Pat Hill. 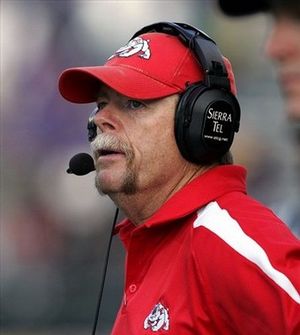