Two years ago, the Cal football team came into Autzen Stadium undefeated, ranked 6th in the country, and entertaining dreams of a conference championship. Meanwhile, Oregon was still trying to find itself under first-year head coach Chip Kelly and still shaking off the effects of a nationally-televised faceplant against Boise State in the Ducks' 2009 season opener.

On that sunny Eugene afternoon, however, Oregon famously (or infamously, depending on your point of view) throttled the Bears, 42-3. And since that day, the fortunes of the two programs have gone in opposite directions: Oregon has won two straight conference titles and played for the 2010 national championship; Cal, meanwhile, went 13-12 in its next 25 games leading up to Thursday night's Pac-12 game.

Cal's return to Eugene on Thursday night was a cold reminder that the Bears have a long way to go to reach the heights to which the Ducks have soared. Cal stayed with the 9th-ranked Ducks for a half, and led 15-14 at halftime. But behind the running of LaMichael James (30 carries, 239 yards, 1 TD) and the all-Thomas pass-and-catch combo -- quarterback Darron Thomas and wide receiver D'Anthony Thomas (6 catches, 114 yards, 2 TD) -- Oregon scored touchdowns on its first four possessions of the second half to take the game by the throat and race to a 43-15 victory in front of a loud Autzen Stadium crowd.

With the loss, Cal (3-2, 0-2 Pac-12) dropped its second straight conference game, marking the second time in three years that the Bears have lost two in a row to start conference play. Oregon (4-1, 2-0 Pac-12) won its fourth straight after its season-opening loss to LSU. But any enthusiasm the Ducks might have about Thursday night's nationally-televised win is undoubtedly tempered by the injury suffered by James early in the fourth quarter.

Though Oregon's offensive onslaught in the second half ultimately doomed the Bears, it is not as if Cal had an answer for the Ducks' running attack in the first half. James ran 14 times for 166 yards in the first half, including ripping off runs of 53 (TD), 47, 39, and 30 yards. In fact, James had broken the 100-yard barrier in the first quarter before the Bears tackled him for an eight-yard loss on the final play of the quarter.

But the Bears hung around with three swings of Giorgio Tavecchio's leg. Unfortunately for the Bears, however, the first two of Tavecchio's field goals (27 and 38 yards), which capped Cal's first two drives of the game, meant that Cal could not finish good drives with touchdowns. And after Oregon answered the first two field goals with ridiculously easy touchdown drives to take a 14-6 lead (on a 53-yard TD scamper by James and a well-executed 17-yard run by De'Anthony Thomas on a reverse), it looked like the Ducks were poised to take control of the game early. 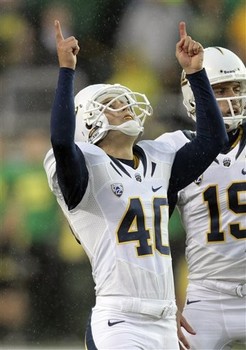 But Cal forced two straight Oregon punts in the second quarter and then got a career-long 54-yard field goal from Tavecchio with 9:40 left in the first half to cut Oregon's lead to 14-9. Then Cal seized further momentum, stopping Oregon on a 4th-and-8 in Cal territory on a nice play by Ernest Owusu, who blew up a screen pass intended for De'Anthony Thomas. Cal capitalized with perhaps its best drive of the game, going 59 yards in six plays, including a brilliant 28-yard reception by Keenan Allen on a 3rd-and-19 play to put Cal in the red zone. This time, the Bears got six points when a scrambling Zach Maynard found Allen again, this time for a 12-yard touchdown strike. Coach Jeff Tedford elected to go for the two-point conversion, on which the Bears failed miserably, keeping the score at 15-14 Cal. And just when it looked like Oregon would score before halftime, the Bears' defense came up with a big stop when safety D.J. Campbell snuffed out a promising drive with an interception and return to midfield. Cal missed a chance for more points, however, when Tavecchio's 40-yard field goal on the last play was partially blocked for the senior placekicker's first field-goal miss of the season. But despite the missed opportunity, the Bears still held a surprising 15-14 lead over the hometown Ducks at halftime.

The Ducks were everything on their first four possessions of the second half. You want methodical? Well, that was Oregon's first possession, an 88-yard drive that started with seven straight running plays (including two conversions of 3rd-and-shorts) and ended with a 23-yard touchdown pass from Darron to De'Anthony Thomas, which was executed to perfection to beat Cal defender Josh Hill. Just like that, Oregon retook the lead, 21-15.

You want quick strike? That was Oregon's second possession of the second half. After a Cal punt, Oregon's next drive was 86 yards on three plays, the last being a 68-yard touchdown jaunt by Kenjon Barner on which there were few (if any) Cal defenders present at the point of attack. An equally easy two-point conversion pass play to De'Anthony Thomas made it 29-15 Oregon.

You want both methodical and big play? Let's look at Oregon's third possession of the half. Quarterback Darron Thomas took advantage of the Bears' concern with James, running for 25 yards on a zone read play. After five straight runs by James, Thomas then found The Black Mamba again: De'Anthony Thomas beat Cal cornerback Steve Williams on a corner route for a 21-yard touchdown. 36-15 Oregon, and Cal was pretty much done.

But Oregon wasn't done quite yet. After a Bears drive ended meekly with an unconverted 4th-and-3 at the Oregon 41, the Ducks went for the throat. The quarter ended with a 41-yard pass play from Thomas to Thomas, which gave the Ducks 256 yards of total offense in the third quarter alone. (The Ducks finished with 563 yards of total offense to the Bears' 465.) Then, on the first play of the fourth quarter, James looked like he had another one of his patented outside touchdown runs when he outran the Bears defense to the left corner of the end zone. But James stepped out of bounds at the three-yard line -- a fact that, on the very next play, showed how football can be a cruel game of inches.

Oregon would ultimately get the touchdown to make it 43-15. But one play before the Ducks scored, James was stuffed for no gain by Cal defensive lineman Mustafa Jalil. As James fell to the turf, his right arm landed awkwardly on the turf, a sight that was difficult to watch on the instant replay. James was carted off the field with an air cast on his right arm. As of the time of this post, his status (and, arguably, Oregon's status as a Pac-12 championship contender) is uncertain. 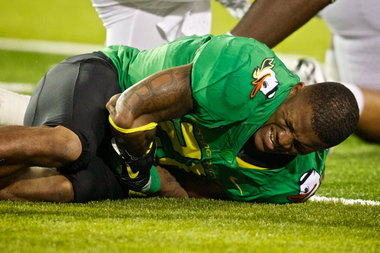 The only thing that could stop LaMichael James on Thursday night was a freak injury. Here's hoping he is all right.

As for the game -- well, that was over. Cal fans got to see Allan Bridgford enter the game at quarterback with 9:49 remaining in the game after Maynard appeared to be wobbly after taking a hard hit on the previous series. Bridgford completed 8 of 19 passes (including several near interceptions) for 103 yards, but could not get the Bears into the end zone.

Before leaving the game, Maynard completed 20 of 41 passes for 218 yards and a TD. He did not throw an interception, but it did not take an expert analyst like Jesse Palmer to see that Maynard struggled with his accuracy. On at least two occasions in particular, Maynard missed wide open targets in the flat on short dump-off passes that would have given Cal much-needed first downs to keep drives alive and keep the ball away from the Ducks' potent attack. There were also times where Maynard seemed locked into his primary receiver, none more glaring than the 4th-and-3 play in the third quarter when Maynard threw incomplete to Marvin Jones along the right sideline (a pass that Jones had no chance to catch inbounds). As noted on the telecast by (ugh) Craig James, Allen was wide open on a crossing route over the middle -- an apparent missed assignment by the Oregon defense left Allen roaming free. Yet, Maynard did not give Allen's side of the field a look, even though Allen was the Bears' most formidable receiving target (9 catches, 170 yards, going over 100 yards for the fourth time this season).

Though the Bears did some good things against a very good team, a 28-point loss is still nothing to feel particularly good about. Cal will need to regroup and gather itself quickly -- the USC Trojans come to AT&T Park in another ESPN Thursday night game next week.

CAL INJURY UPDATE: Marc Anthony, who left the game in the second quarter, has a dislocated shoulder. (HT Berkelium 97)