CLICK HERE TO DISCUSS ALL THE FOURTH QUARTER ACTION!

It is gameday. And it is not just any game: it is Cal at Oregon at the decibel-rich eardrum killer known as Autzen Stadium. It's in prime time, nationally televised on ESPN, with Craig James in the booth providing his meaningful analysis. (Note to self: turn volume down.) And if you haven't noticed, this is not a Saturday. No sirree, Bob -- this is a Thursday night affair, Cal's first such ESPN appearance since the 2003 season (a 31-24 loss at Utah, which we're not going to talk about today).

(There is no truth to the rumor that Aaron Tipoti pulled a hammy while I typed that last paragraph.)

So what can we expect to see from the Quackers up north?

Cal's most optimistic matchup tonight, generally speaking, is the Bears' offense against the Ducks' defense.

On the surface, the #'s are a big drop in defensive production from where they've been the past two years. I'm not overly fond of statistics anyways, but this is really a case where the numbers don't tell the whole story. For instance, Oregon gave up 681 total yard to Missouri State, (416 rushing, 265 passing) but only seven points. Similarly, they held Arizona down 36-9 while the game was still in doubt, and gave up most of Nick Foles 415 passing yards during garbage time. Perhaps a more accurate indicator is to look solely at the LSU game where they held the Tigers to a respectable 240 passing yards and 95 on the ground. Considering how quickly and often the Duck offense scores, some defensive stats will be misleading due to the number of extra snaps that their defense has to play.

The strength of the team is a deep and athletic secondary. Even without suspended corner Cliff Harris, there is plenty of experience in this group. Safety John Boyett is their leading ball-hawk, and Rover Eddie Pleasant is their version of Thomas DeCoud. New starting MLB Dewitt Stuckey is a bit undersized, but has a really shown a nose for the ball.

When Oregon has the ball -- well, that's where it gets dicey for Cal fans. Notwithstanding last year's improbable Cal defensive performance, in which the high-powered Ducks' offense managed just one offensive touchdown, there is little expectation that the Bears will be able to slow down Darron Thomas, LaMichael James, and company.

ManBearCal previewed the Oregon offense earlier today and gave us his take on tonight's matchup between the Ducks O and Bears D.

I'm skeered! After last year, I can't totally rule out the possibility of an upset, but the four guys who made our defense so effective last year (Conte, Mohamed, Jordan and Hill) are gone. That's essentially our top performer at each level of the defense, not to mention guys that all had HUGE games against the Ducks last year at Memorial. We've replaced them with some nice pieces, but this offense is one that requires discipline and savvy. Haven't seen a ton of that from this defense on a consistent basis yet. I'm encouraged that we've had extra time to prepare, but this is still a road game against a very prolific offense. On a Thursday night. On national television. And pardon me if i just can't quite shake the memory of 2009 at Autzen *bangs head on desk*.

As we learned from Kodiak, our offense could have some success against the Oregon defense if we can sustain drives and Maynard can consistently make the throws that have, at times, been so erratic to this point in the season. The Duck defense lost some key guys there. Important to remember that even a mediocre offense could have helped us clinch the upset last year.

BUT...we won't win a shootout with the Ducks. And that is what we would have to do, because I don't see the Cal defense of this season being able to contain Oregon's offense. We're not there yet. Not enough experience. If we keep it respectable...well, I'll still be pissed off. But slightly less pissed than if we get killed. We won't slow them down enough in Autzen. Prediction: 28-42 DUCKS.

This is your pregame thread. Use it to let out your pregame tensions until your heart's content. Watch for the link to the first quarter thread and go from there. GO BEARS! 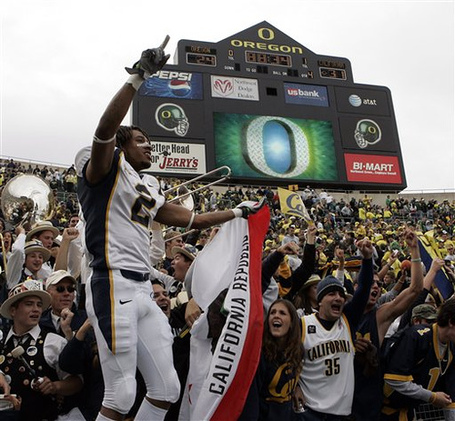 Can Cal pull off another improbable happy ending at Autzen Stadium?

Bears and Ducks. Ducks and Bears. How are YOU feeling?