Hey, look at who's there in fourth! 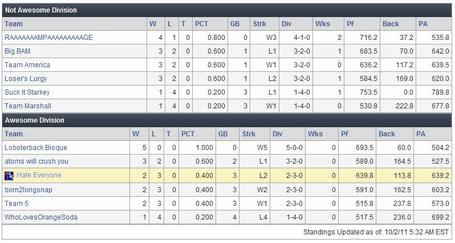 Suck It Starkey is back on the schneid. This is most definitely my favorite theme of the season. 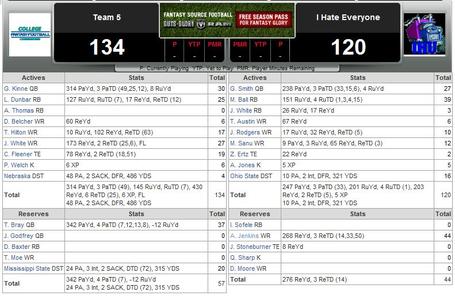 I Hate Everyone fell due to the incompetence of its own manager, as A. Jenkins of Illinois went off for 44 points while Tavon Austin came up with only 67 yards. Come on, man! At any rate, Team 5 somehow pulled out a victory 134-120 behind strong performances from Greg Kinne, Lance Dunbar, and the I-thought-he-was-injured-so-I-picked-up-Zack-Ertz-Coby-Fleener. Ugh. Double ugh. 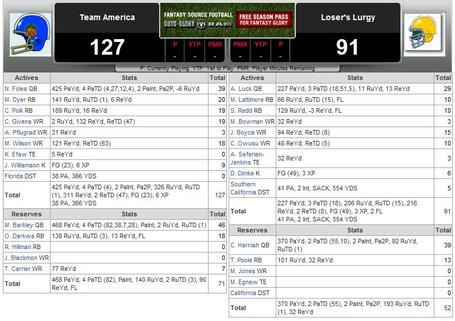 Loser's Lurgy continues to lose as they went down 127-91 to Team America. The Lurgy got a more representative output from its wide receiving corps (though still nothing terribly noteworthy), but this time only came up with 20 points from its running backs, including the normally reliable Marcus Lattimore. Nick Foles went off for 39 points to go with decent complementary numbers from Michael Dyer and Chris Polk. 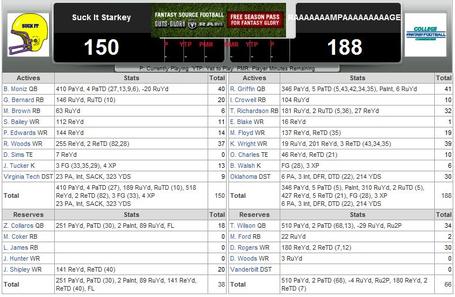 Suck it Starkey had the misfortune of playing the highest scoring team in the league once again, falling 188-150. Robert Griffin was his usual ridiculous self, and Trent Richardson, Kenny Wright, and the Oklahoma defense all put up 30+ point performances each. Bryant Moniz went for 40 points and Robert Woods for 37, but Starkey was one superstar performance short. 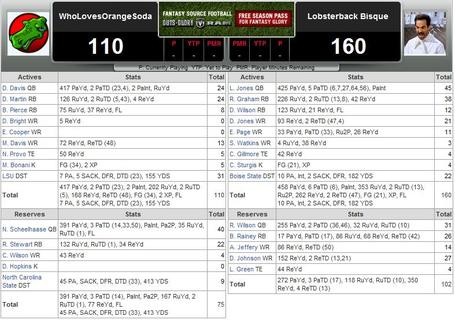 Lobsterback Bisque roasted WhoLovesOrangeSoda 160-110 behind Landry Jones and Ray Graham. Orange Soda got a combined 81 points from Dominique Davis, Doug Martin, and the LSU defense, but a total of 21 points from all of his other backs and receivers. That's not going to get it done. 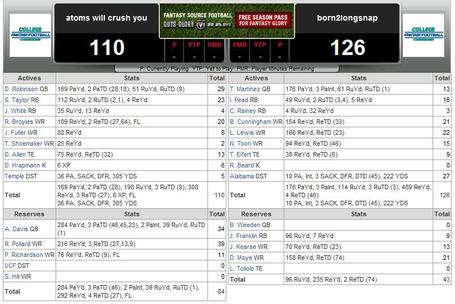 atoms will crush you failed in its mission, falling to born2longsnap 126-110. Denard Robinson was his usual magical self, and Stepfan (sp?) Taylor had a decent 23 points, but born2longsnap got strong efforts from its receivers as well as the Alabama defense to pull out the victory. 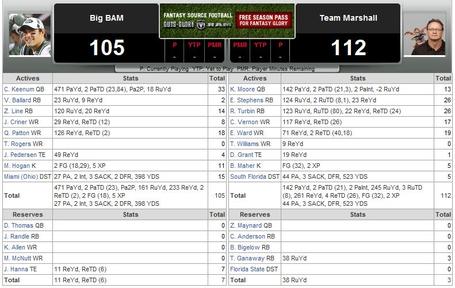 Team Marshall found itself with a victory over Big BAM 112-105 thanks to 11 points from its tight end, kicker, and defense/special teams. Oh wait, that should read, no thanks to its tight end, kicker, and defense/special teams. Big BAM got 33 points from its shiny new QB Case Keenum, but got little otherwise, with Vick Ballard going for a mere two points and Juron Criner only putting up eight points himself.