Joanne Boyle brought a lot of success to Cal.  Consistent winning.  Repeated trips to the NCAA Tournament.  Winning the WNIT.  However, last year she abruptly left for Virginia.  Into her shoes stepped former assistant Cal coach, Lindsay Gottlieb.  Although Cal fans had some knowledge about her from her previous stint in Berkeley, the question remains about how she will continue the winning tradition at Haas.  Will she be able to build off of the years of great recruiting?  Will she be able to take a team without any seniors to the NCAAs?

Yesterday's Tip Off Event was the first opportunity for Cal fans to meet and greet the players and Coach Gottlieb with her staff.  It was our first opportunity to get to know Coach a little bit better and eat some free food! 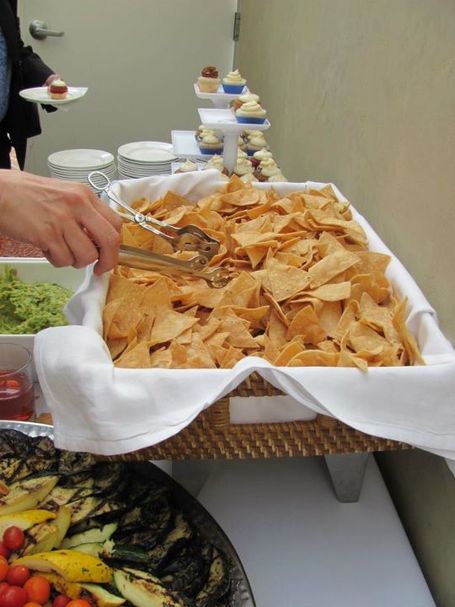 After the event, I can report back to the extended Cal fanbase that we will have a tight knit WBB team in 2011-2012.  Now, I don't know if sharing a lot of laughs and being incredibly personable in October will translate to tons of wins in January, February, and March.  Certainly, nobody does.  But being able to see the chemistry of the team in action and listen to Coach Gottlieb's vision for the team has me believing!

Join NorCalNick and myself after the jump to see more photos from the event and listen to why we believe that Coach Gottlieb can build upon Coach Boyle's atmosphere of success at Cal.  GO BEARS!

TwistNHook: When NorCalNick, AEE07, and myself got to the event, it was part of the meet and greet section of the event.  That was from 3-4 with the program lasting from 4-5.  Being the anti-social introverts that we are, we didn't interact with many other people at the event.  However, we did get an opportunity to chat briefly with Coach Gottlieb.

It's always interesting when you get the opportunity to speak with the Coaches or authority figures.  They always seem distant, almost mythic, when you just think of them as "Football Coach" or "Women's Basketball Coach."  Perhaps it is because Coach Gottlieb is a closer in age to me than Tedford or Montgomery, but I found it really easy to interact with her.  She was very personable and seemed like just a regular person.  Not some sort of "Coach" distant from us plebes.

She even laughed at a joke I made about the movie Juwanna Mann, so she's good in my book. In retrospect I should have asked her if she had the hamstrings to spend 80% of all the coaches in a crouched position like Coach Boyle.  Sometimes inspiration just strikes too late, I guess!

When the program started, Eliza Pierre came out to announce that it was Coach Gottlieb's birthday and that we should all sing happy birthday to her. 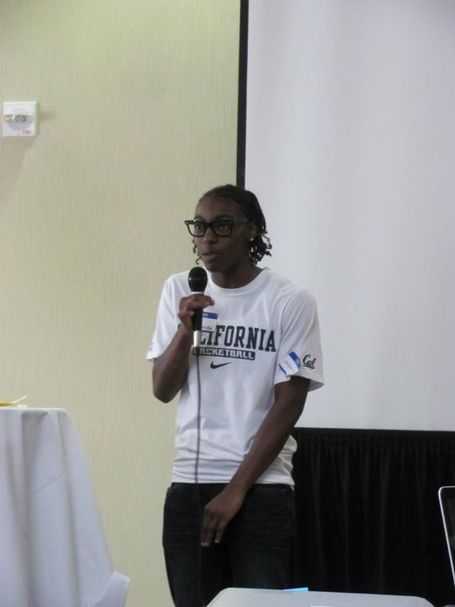 So, we did!  And Coach Gottlieb was happy! 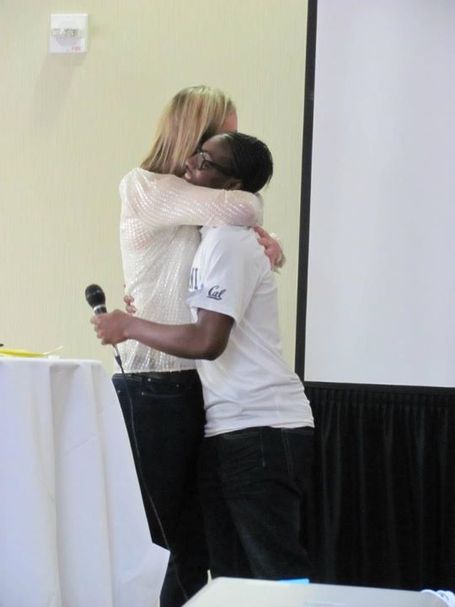 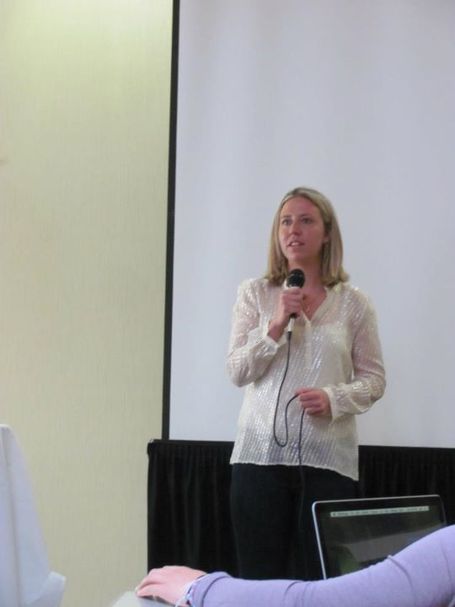 They had a video of the team practicing set to pop music.  There were several videos throughout the course of the presentation. 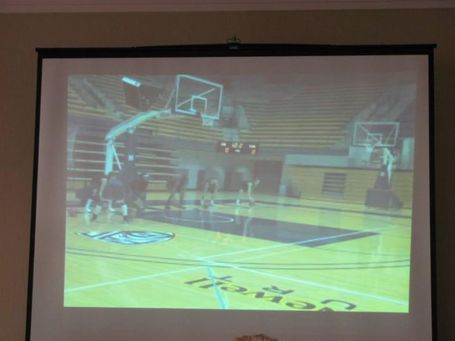 Here is the video:

NorCalNick: She spent at least 15 minutes just thanking everybody for everything, which was really sweet and humble. Most of the people she thanked were the usually suspects (Director of Operations, Assistant Director of Operations, Marketing people, etc.).  But one person stood out.  Cal has hired a former marketing director who worked for the Minnesota Lynx and the WNBA as a marketing consultant to help grow the Cal women's basketball brand.  Unfortunately, I wasn't taking notes and thus don't remember her name.  But she had an impressive resume and it's just another example of an outside-the-box idea from Coach Gottlieb.

TwistNHook: She discussed the Cal Triple Threat program, which is a fan program to help support the team.  It is not about donating money (although that is important), but also about being an ambassador of the team to everybody else.  Representing the team well and even helping assist the team etc etc.  In return, you can get access to practices, pre and post game events, and other great Cal WBB opportunities.  All for just $50!

NorCalNick: One of the interesting sounding parts of joining Cal Triple Threat is that they view you as a 'part of the team' in more than one way.  I think the exact quote Coach Gottlieb used was "if you want to help, we'll find a way to use you." If you're an engineer and one of the players wants to major in engineering, they might call you for advice! I have no idea how they're planning on managing that, but it's a neat idea.  I plan on helping out by writing about the team, but if they ever want to call me and ask for advice on how not to get paid for blogging I'd be happy to help!

TwistNHook: The Director Of Operations came out to discuss how to support Cal WBB.  She also implied that audio streams of all away games would be free this year.  NorCalNick said that they were charging for it last year.  The Director kept saying that they were going to do the streams, but never quite stated if they would be free.  I implied from her statement that they "listened to the fans" there that they have changed them from paid to free, though.

NorCalNick: Yeah, it wasn't entirely clear to me either. Certainly the team had gotten complaints from their core customers about having to pay to listen to a road game radio feed. But those same people probably all attend home games, and thus wouldn't have had to pay for home game video.  At the very least, free radio is a step in the right direction and would ensure that we can follow the game in some fashion in the last year before the Pac-12 network goes live.  I mentioned streams to a staff member, so at the very least they are aware that many aren't thrilled with Cal All-Access. 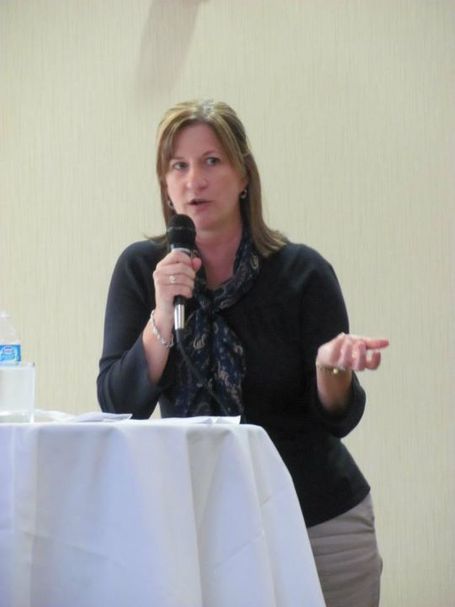 TwistNHook: Then Coach Gottlieb brought the team out.  Each player was tasked with introducing another player on the team and saying complimentary things about them.  While some seemed nervous and a bit stressed by the public speaking assignment, most were entertaining and personable.  Again, laughing a lot in October doesn't mean they'll win the National Championship or anything.  But it can't hurt! 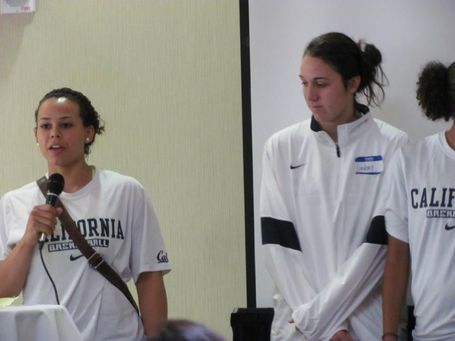 NorCalNick: Sophomore guard Mikayla Lyles started things off by introducing sophomore guard Lindsay Sherbert.  Coach Gottlieb said that Mikayla's future is as a broadcaster, a la Rebecca Lobo on ESPN - except she'll be a shill for Cal instead of UConn!  Mikayla praised Lindsay's 'do anything to help the team' attitude and her sense of humor 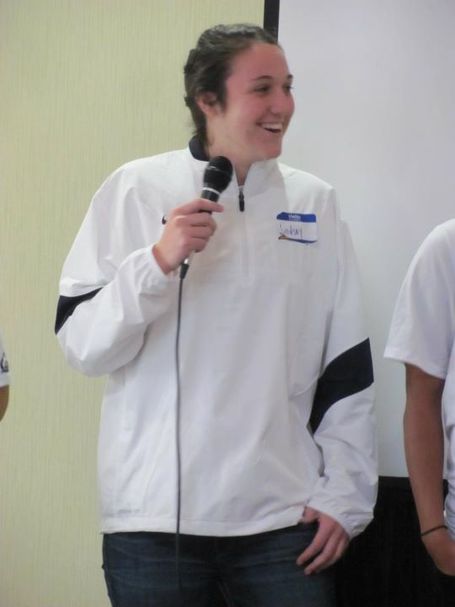 Lindsay in turn introduced junior guard Layshia Clarendon, who 'hates to lose.'  She also appreciated that Layshia's serious attitude towards academics.  That's why they're in school, after all! 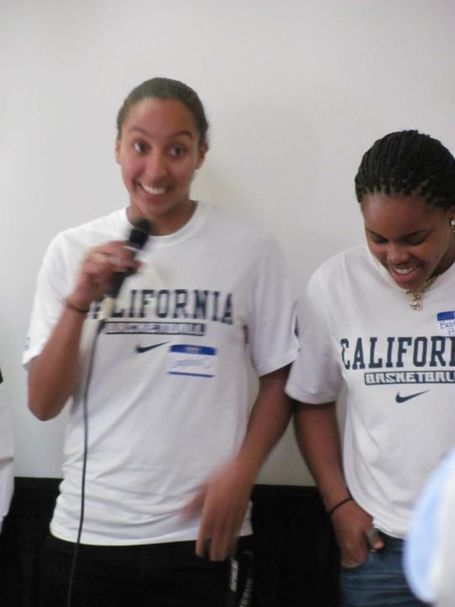 Layshia introduced freshman point guard Brittany Boyd, and in one of the funnier moments of the day, sounded incredibly relieved to have another true point guard on the roster so that she can move back to shooting guard. 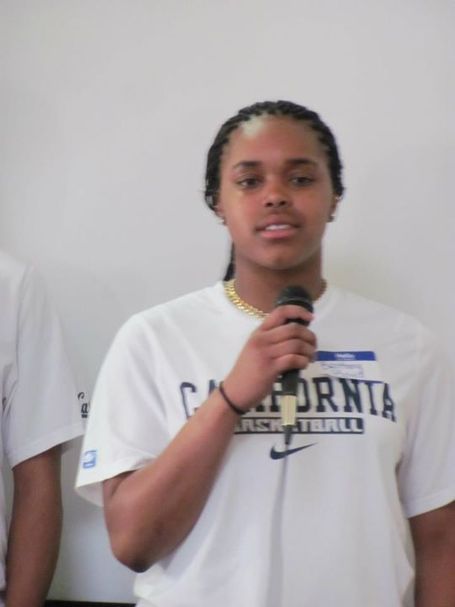 Brittany introduced junior guard Eliza Pierre, highlighting her defensive prowess.  I know it's not a new look, but I love EP's glasses. 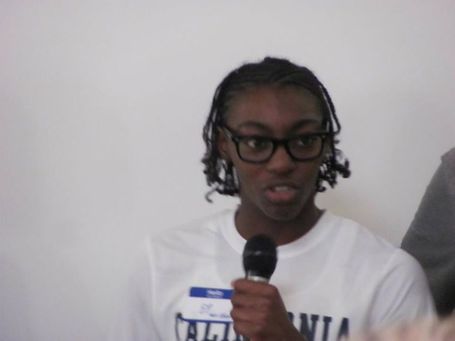 Eliza introduced freshman forward Justine Hartman, noting that she was clearly 'a post' as Eliza looked up at a player who has a good 7 inches on her.  She said that Justine is the player that Cal will look to at the end of a close game, because nobody can stop her scoop shot. 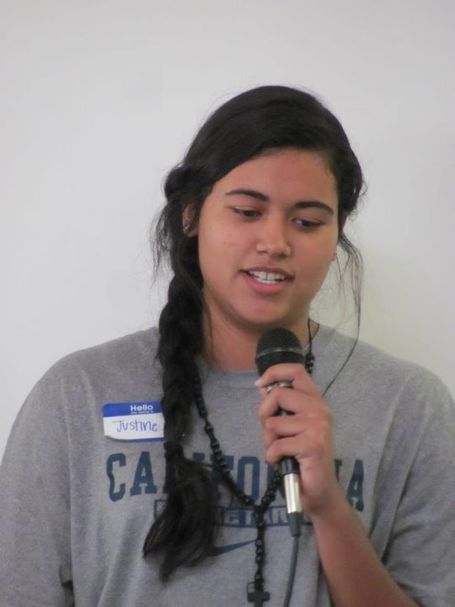 Justine introduced redshirt sophomore Gennifer Brandon, specifically noting her intensity and incredible jumping ability on the court, and her incredible kindness off the court 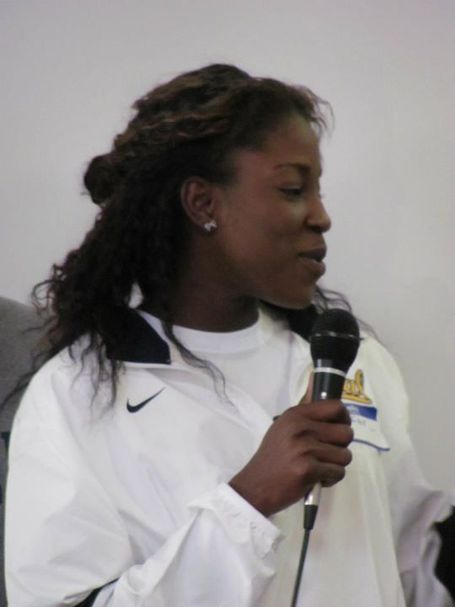 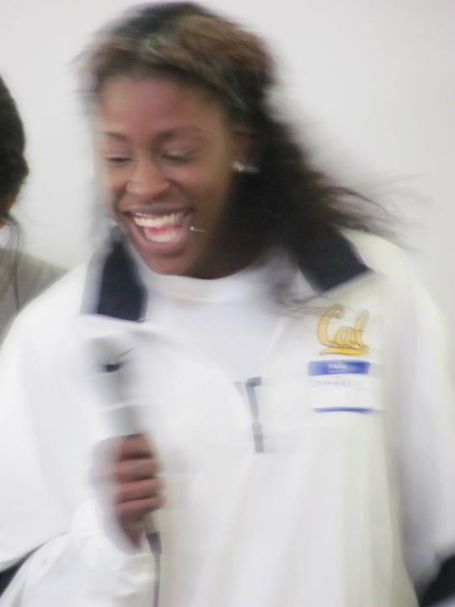 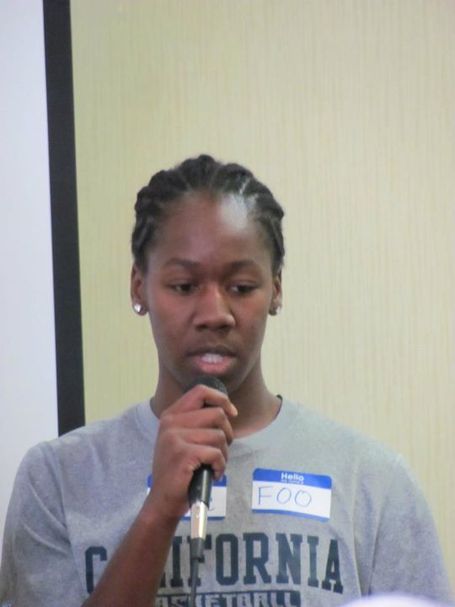 Foo got to introduce us to Junior Tierra Rogers, an extra coach during games and practices, and a great listener off the court. 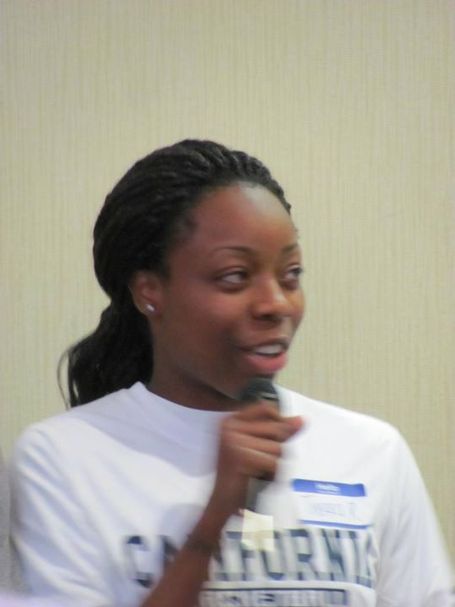 Tierra introduced Avigiel Cohen, emphasizing multiple times that she likes to talk (which was not denied by Avigiel) and praising her leadership skills.  Both on and off the court, players have learned from the fresh perspective she brings as a foreign player. 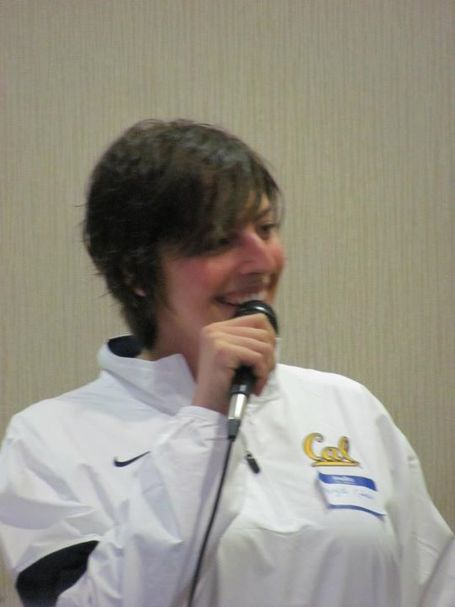 Avigiel introduced the only other non-Californian on the roster, freshman guard Erika Johnson out of Seattle.  She's impressed with the height and length she brings as a guard. 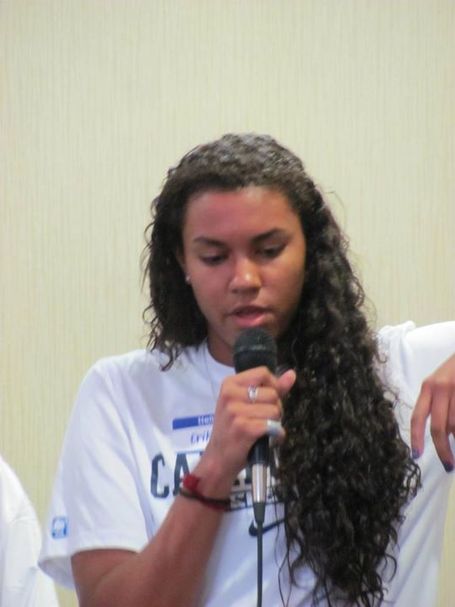 Erika introduced fellow freshman Reshanda Gray, a forward from L.A., and based on their interactions I think they've become fast friends. Reshanda has an infectiously gregarious personality and Erika also mentioned that she hates trying to rebound against her. 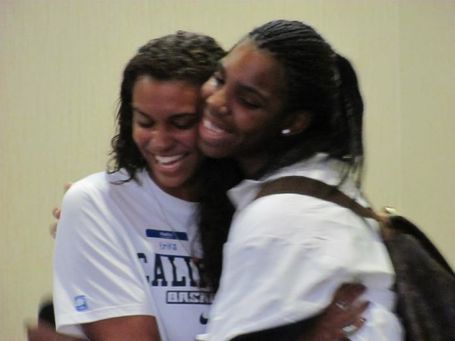 Reshanda introduced junior forward/center Talia Caldwell, and thanked her for helping her learn her position as one of the veterans on the team. 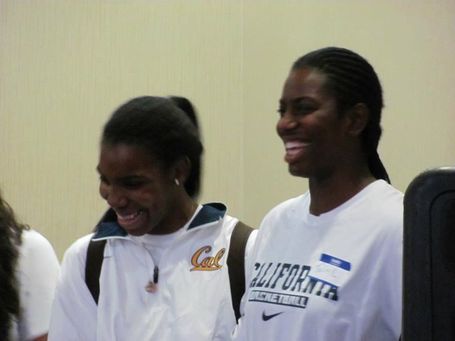 TwistNHook: Then, Coach Gottlieb came back out and continued discussing the Cal Triple Threat program.  She finished up talking about her goals for the team.  She talked about how they are going to try to be as transparent as possible.  Photos.  Videos.  "Have the iPhones rolling" she said about giving behind the scenes access to the players.  Really helping the fans feel invested in the players and the team. 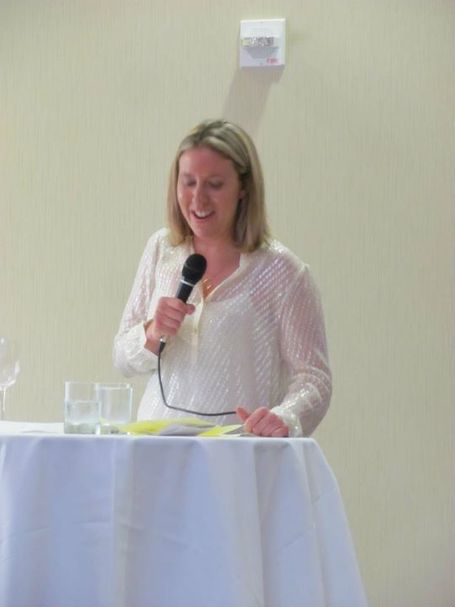 She announced a website, ThisIsCalBasketball.com.  This site would be where fans can go and learn more about the players and see the process of the season unfold.  They had a video of some of the activities that is going to be on the site.  Photos.  Videos.  Not sure what else.  We will find out on October 24, apparently.  It is an ambitious goal, but I hope it works out.  Here are a few scenes from the video: 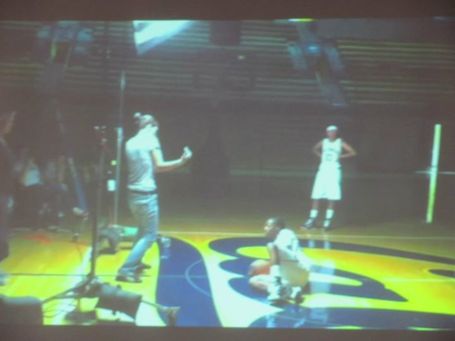 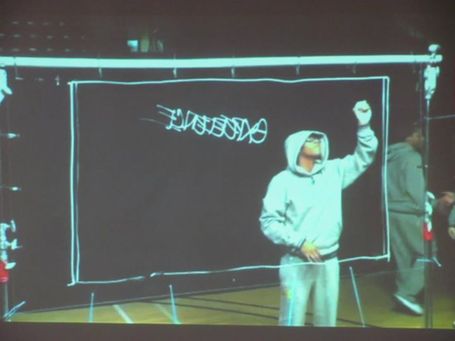 Finally, she took some questions.  This led to a conversation with some of the players about a dance video of the coaches.  This was confusing to a lot of the fans there, who had never heard of the video, so they showed it.  It is of the coaching staff dancing around at the retreat a few weeks back.

NorCalNick: I believe it was Brittany Boyd who asked (demanded?) that they play the video, and before finally agreeing to do so Coach Gottlieb said that in the past, she blamed every one of her gray hairs on Devenei Hampton . . . but now she's starting to think that Brittany Boyd and Reshanda Gray are the ones creating gray hairs these days. 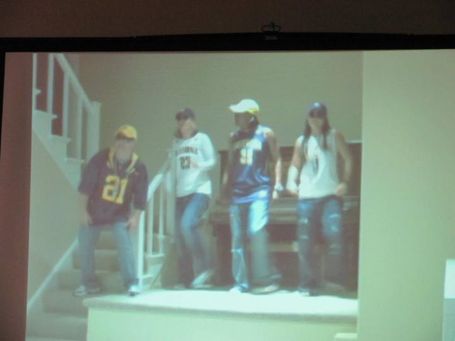 Here is the video:

TwistNHook: All in all, Coach Gottlieb laid out a modern twist on the WBB team.  It's not just about winning, although obviously she wants to achieve success here in Berkeley.  It appears more about helping the fans feel ownership over the team.  Building the fanbase, so that Haas is packed and rocking.  Making us the fans feel like it's not just the basketball team winning, but us winning, too.  We'll see how it all turns out when we get into Pac-12 play in January.  But Coach Gottlieb certainly does not lack vision.  We hope to do what we can here to support her in her mission to spread the gospel!  PRAISE OSKI!  HALLELUJAH!  GO BEARS!