Ok, maybe I'm not making it back up to first anytime soon. 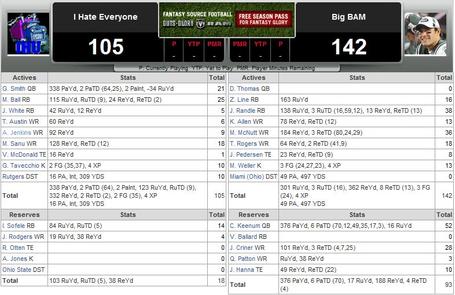 Yes, I got my ass kicked by Big BAM 142-105. And it would have been even worse had Scoots subbed in Case Keenum for Darron Thomas. Maybe I shouldn't have spent my third round pick on James White. What a loser. On the other hand, hey, Montee Ball is pretty awesome. And so is my man Mohamed SANUUUUUUUUUUUUUUUUUUUUUUUUUUUUUUUUUUUUUU. Inexplicable loss to Louisville aside. Maybe Greg Schiano should stop playing true freshman QBs every year. 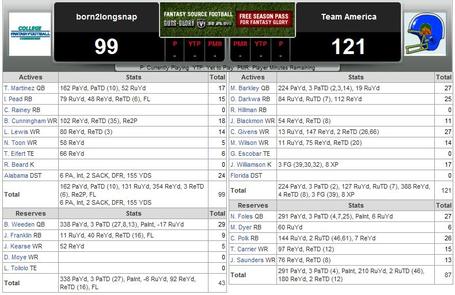 Team America got by born2longsnap 121-99. How, you ask? Well, wouldn't you like to know?!? Mostly because of Matt Barkley, and some other guys whose names I honestly don't recognize. O. Darkwa? C. Givens? Who? What? Taylor Martinez and the Alabama defense combined for 41 points for born2longsnap, but, well, that was about it. 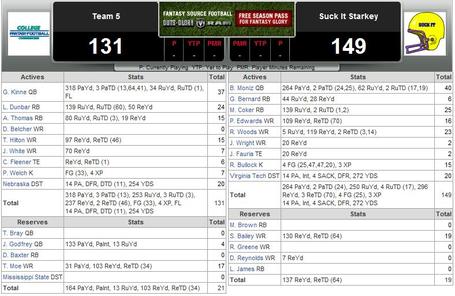 Team Starkey almost fell to the bye week know as Team 5 before winning 149-131. Bryant Moniz would not let his team lose, going off for 40 points, and barely outdoing his counterpart Greg Kinne. And how he decided not to start my man Stedman Bailey is beyond me. Totally a better play than Tavon Austin. But of course I had to go and read too much Bruce Feldman before the year started who went off touting how Austin could be a darkhorse Heisman candidate with Dana Holgorsen in town. Man. 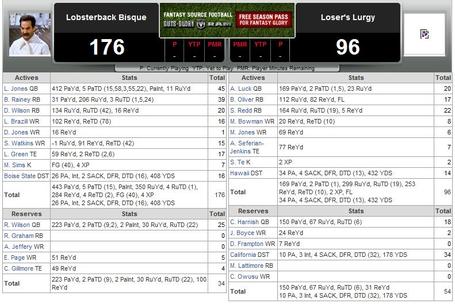 Lobsterback Bisque absolutely throttled Loser's Lurgy 176-96 in the beating of the year. Pretty sure that's the worst margin we've seen. Memo to royrules: stop starting the kicker on an absolutely dreadful offensive team. It's Mohamed Sanu or bust in New Brunswick. Meanwhile, Landry Jones put up nearly half his opponent's point total by himself. 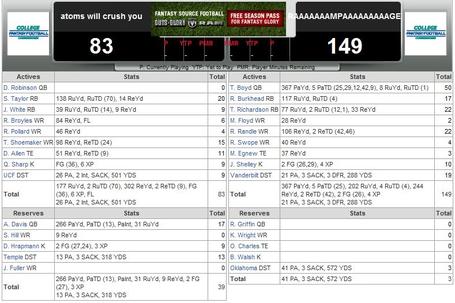 RAAAAAMPAGE crushed atoms will crush you 149-83. Denard Robinson was on a bye, and Tajh Boyd went off for 50 points. That's pretty much all you need to know. 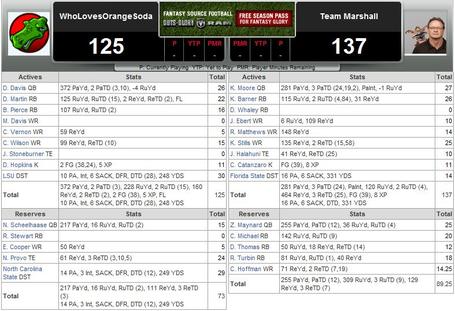 Team Marshall pulled off a win 137-125 over WhoLovesOrangeSoda and the record setting Dominique Davis (oh, Aaron, we hardly knew your record) behind Kellen Moore and Kenjon Barner. They crank out RBs like they're Nike shoes up there in Eugene! Would have been worse had Marshall been able to sub in Christine Michael for the inactive D. Whaley as well.