Cal Football: A Golden Spotlight on the Defensive Dominance Against the Utah Utes

Share All sharing options for: Cal Football: A Golden Spotlight on the Defensive Dominance Against the Utah Utes

We all knew it was coming. After a strong effort last week, our defense was ready to make a back-up QB look like a Heisman candidate. It's the Cal way. The last time we faced a struggling offense that had just given up a heavy dose of sacks, we put Tyler Hansen and Paul Richardson into the record books. But lost in the hand-wringing over the past two weeks has been the quiet improvement of our young defenders. More importantly, the entire defense is starting to play some solid ball as a cohesive unit.

Let's take a closer look at some of the highlights:

We played our base look against their power running formations early. When Utah switched to more of a spread look, we countered with our 2-4-5 nickel package.

Utah is in 11 personnel, 1 back, 1 TE, 3WR. Cal has Wilkerson and McCain up on the line as rush-backers next to Tipoti and Guyton. Hill is in as a nickel back covering the slot. 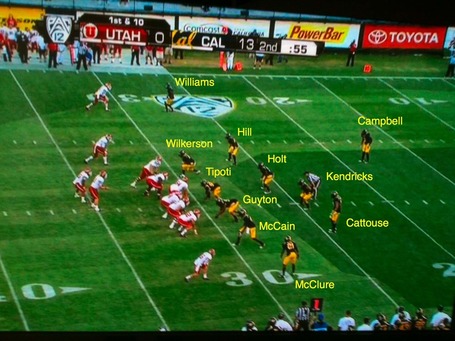 As an interesting wrinkle, the Cal defensive backs did a lot of pre-snap shifting. They would set up at one depth, and then move just before the snap. It appeared to be an attempt to disguise their coverages and confuse the Utah QBs reads. After initially lining up with McClure tight and Cattouse in the box (looks like Cover 1, tight man on the outside), they back off into more of a Cover 2 look. 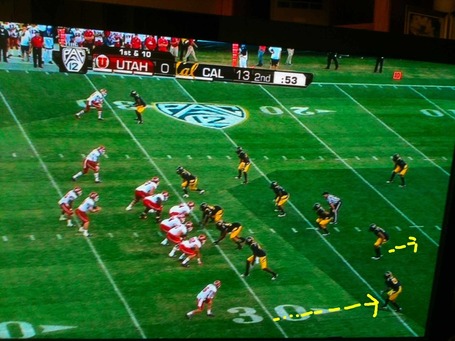 Cal rushes four. The linebackers and Hill drop into a 3 underneath zone coverage. 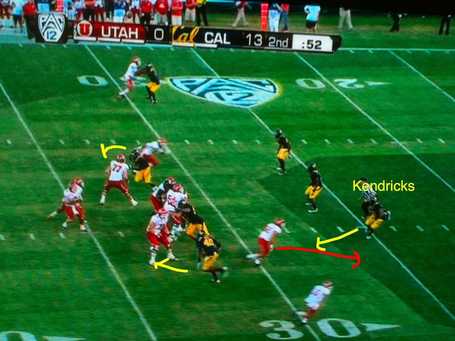 As McCain and Wilkerson start to collapse the pocket, we see that the Utah QB doesn't have a lot of places to go. Williams has their outside WR locked up. Hill and Holt have their slot receiver in double coverage across the middle. That leaves McClure with safety help(Cattouse) off screen. The Utah QB has to check down to his TE running an underneath out pattern. 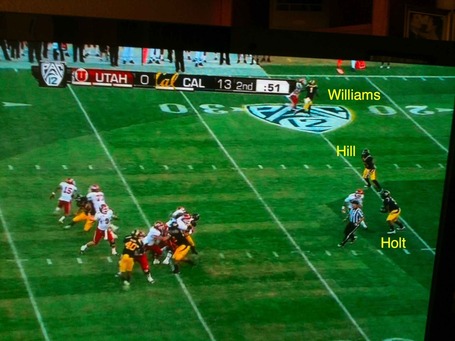 But Kendricks drives on the ball and jumps the route. This is the same type of play that victimized us earlier in the year against Colorado. Kendricks has clearly gotten more comfortable playing inside. 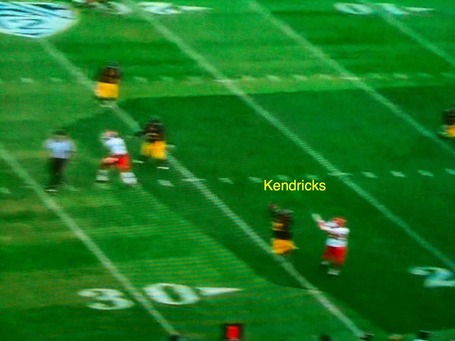 This play happened because Cal was able to get pressure on the passer with just four guys. That left our best corner in single coverage, double coverage on their other two receivers, and still a safety back deep. Kendricks runs the route better than their TE and makes a fantastic play. This interception set up another Cal touchdown which blew the game wide open. 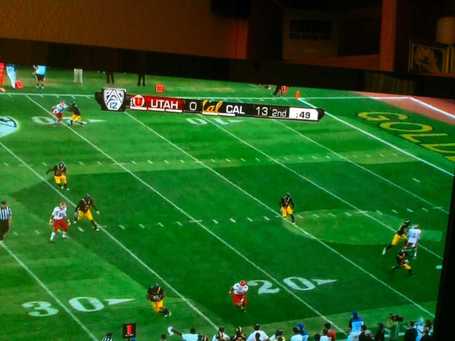 After benefiting from a series of Cal penalties, the Utah team appears ready to threaten for their first points. Utah has 20 personnel, two backs, no TE, and 3 WR. Cal counters again with their 2-4-5 nickel package. It looks like McClure is in man at the bottom with Williams laying off in zone at the top. 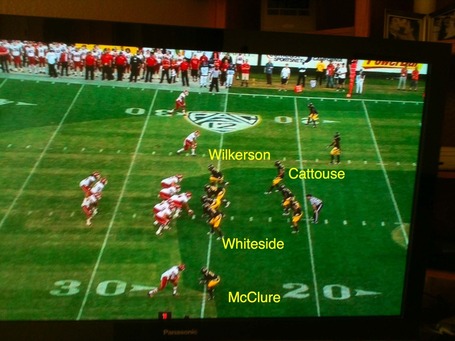 Right before the snap, Hill shifts towards the line of scrimmage and Cattouse drops back out of the box into zone. 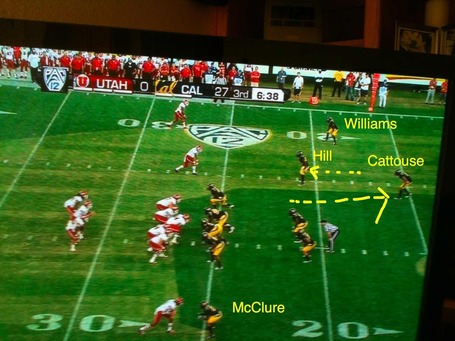 Cal rushes four, but run a stunt with Payne and Whiteside. Hill starts to jam their slot WR. McClure jams his man and prevents an easy release. Utah keeps both backs in as part of a max-protect package. This is seven guys trying to block four. 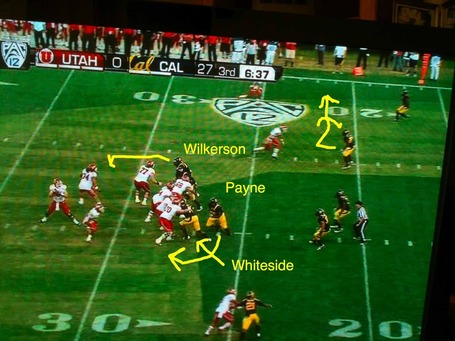 In an interesting wrinkle, Hill releases the slot receiver and drops instead into zone coverage underneath near the sideline. He passes the slot WR over to Williams/Cattouse deeper. *Spoiler alert* This may be an NFL trick that Coach Pendergast is using to switch up coverages mid-play. 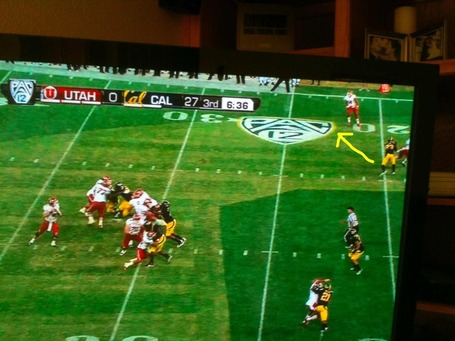 Payne completes the stunt and forces his way up the middle to flush their QB. McClure is all over his man, but also releases him to settle into an underneath zone. Campbell takes over deep coverage. Holt continues to drop deep to bracket McClure's man underneath while Kendricks comes up in support to cover their outlet backs. 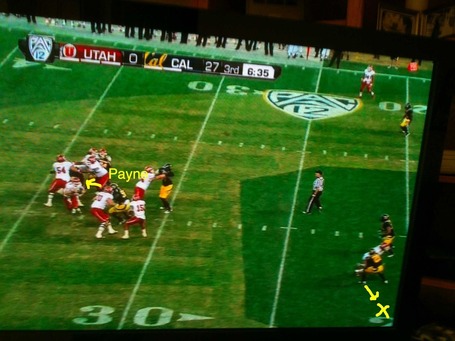 Despite being double-teamed, Wilkerson is relentless. He fights off the blockers and goes in pursuit. 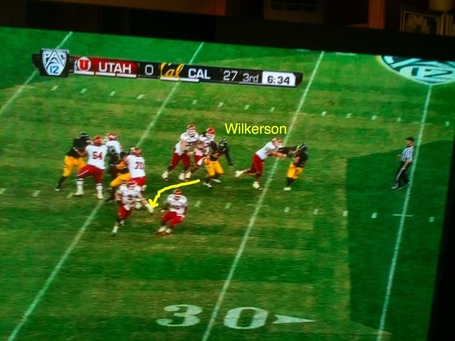 Wilkerson hits the Utah QB right as he is throwing. The ball flutters... 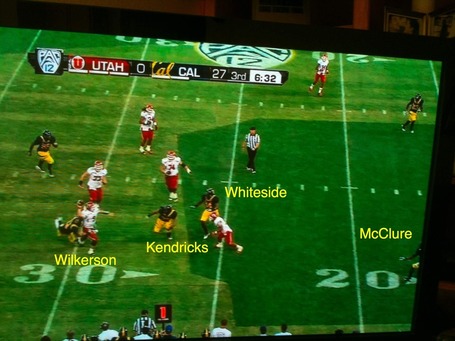 And goes right to McClure who was sitting in an underneath zone. Here's hoping it's the first of many interceptions for this outstanding young corner. 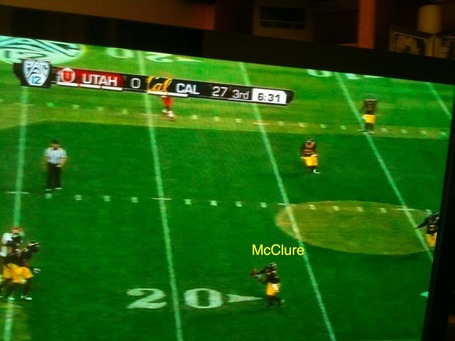 It's the last play before the 4th quarter and the Cal defenders are smelling blood in the water. Utah lines up in a power I with 20 personnel, 2 backs, 0 TE, 3 WR. Cal once again counters with their 2-4-5 nickel look. 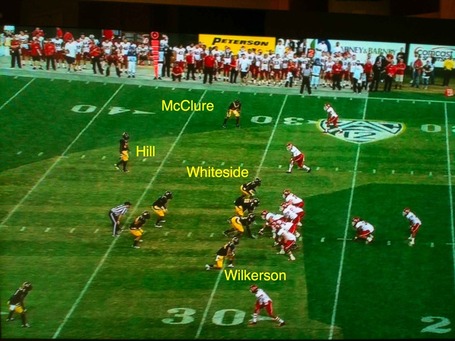 Right before the snap, McClure drops out of tight man position, Hill moves closer to the line, and Cattouse moves in to provide safety support over Hill. 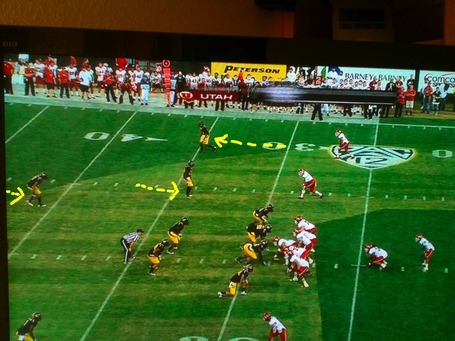 Utah runs play-action. Cal rushes four, and the rest of the defenders are disciplined in their assignments. 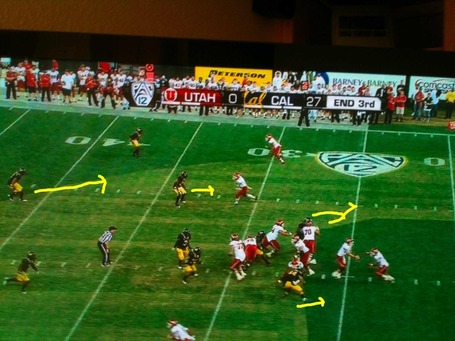 Whiteside beats his man. Meanwhile, the Utah QB has locked onto his slot receiver. Hill reads the quarterback's eyes. 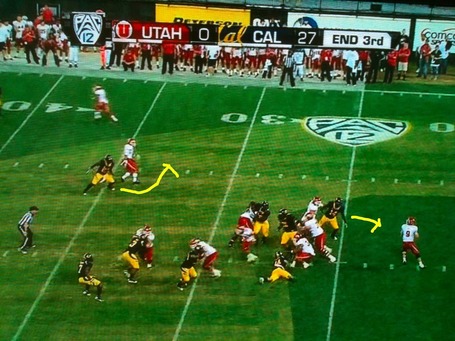 Whiteside leaps and forces an early throw. Meanwhile, Hill cuts underneath the route knowing that he has safety help (Cattouse) over the top. 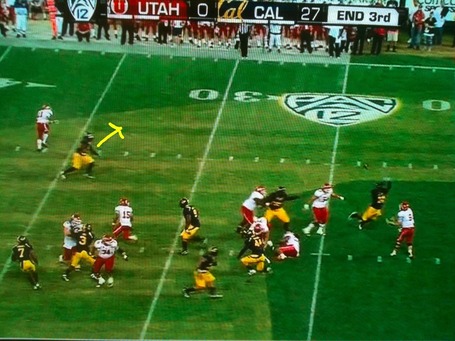 Hill climbs the ladder and makes a great leaping interception. 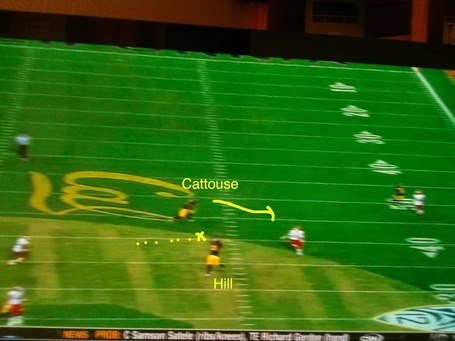 And then puts the nail in the Utes' coffin by taking it to the house. 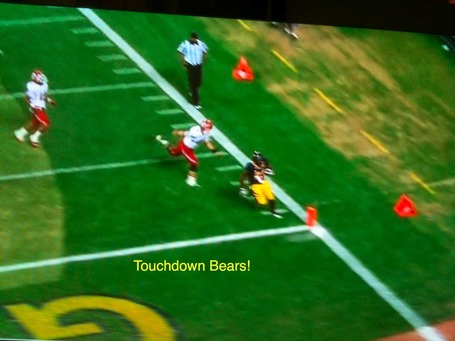 1) This was the best performance by our Dline so far. Guyton, Owusu, and Tipoti were able to control the line of scrimmage all game long. Although we started out stacking the box and sending pressure, we were able to back off an use more of a base look once it was clear that our front 7 was up to the challenge.

2) It was incredibly promising to see us able to pressure the quarterback on a consistent basis rushing only 4. Because Wilkerson, McCain, and Whiteside were able to provide a threat off the edge, it allowed Coach Pendergast to mix up his coverages and provide plenty of safety help.

3) Williams is showing signs of turning into a lock-down performer. If he can hold down his side of the field, it allows a wider variety of blitzes and plenty of safety help on the other side.

4) McClure had a few missteps but continues to show improvement. The coaches are showing a lot of trust in his ability. Instead of always giving him safety help, they mixed up which side was going to be in man and which was going to be in zone to keep Utah guessing.

5) Although Utah didn't have the equivalent of Colorado's Hansen to Richardson combo, they tried to do some of the same things offensively. It's a tribute to the coaching staff that our defense learned from their mistakes earlier in the year and were much tighter in their coverages.

6) It won't show up on the stat sheet, but our safety play was much improved. Many of the errant throws or sacks came because Campbell and Cattouse were doing a great job in coverage.

We knew that our team had inexperience at some key positions. It's great to see the young players continue to improve and start to come into their own. Go Bears! Let's pound the Bruins!