Cal Football: A Golden Spotlight on the Evolving Offense Against the Utah Utes

Share All sharing options for: Cal Football: A Golden Spotlight on the Evolving Offense Against the Utah Utes

Going into this game, there was a lot angst and furrowed brows at the prospect of our inconsistent offense taking on one of the better defenses in the Pac-12. Could our rehabilitated Oline deal with their stout front 7? Would Maynard be able to make them pay for over-playing the run? Would Tedford have something up his sleeve schematically? Thank Oski, the offense stepped up to answer all questions with an unequivocal "yes."

Let's take a closer look at some of the offensive highlights.

It's 3rd and goal from the 5. Cal goes with 21 personnel (two backs, 1 TE, 2 WR) in a Pistol formation. Utah has their goal line package in and looks to be playing an underneath zone. 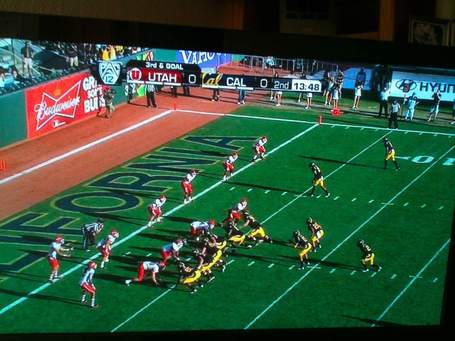 Cal runs the zone-read. It's a gutsy call from the 5-yard line, especially considering that Utah's defense had been very stout against the run up to this point of the game. Maynard reads their star DE Shelby who stays to the outside, and prompts a hand-off to Sofele. Meanwhile, the Oline is getting a great push and open up a lane between Galas and Cheadle. 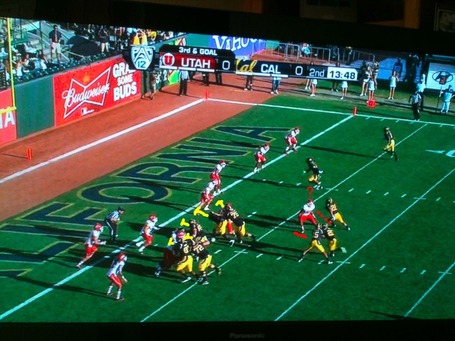 Galas engages their man-mountain DT, MSG seals his guy, and the rest of the line holds firm. 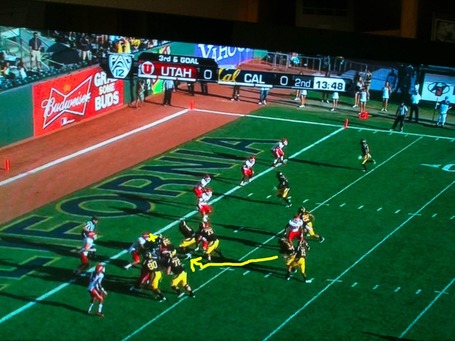 This play should be stopped at the two yard line. But with a tremendous burst, Galas drives his man backwards and knocks back a second Utah defender who is trying to fill the gap. Sofele goes low, absorbs contact, and keeps driving his legs to power into the end zone. This is a statement play against one of the best D-lines in the league. 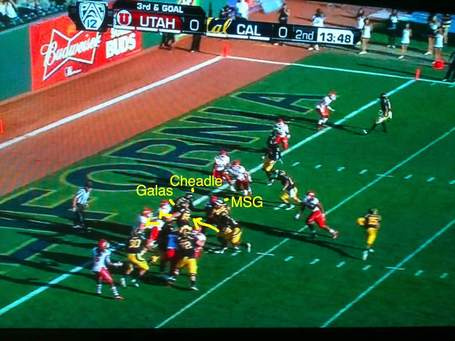 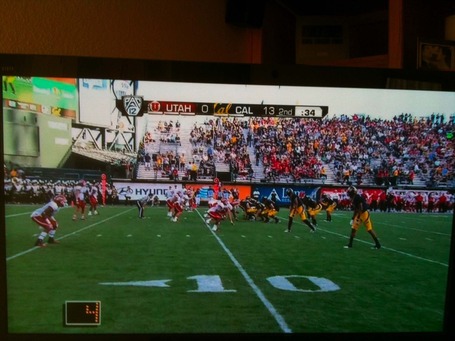 Maynard drops back and starts staring down Jones at the bottom of the screen. This draws the safety out of the middle. Cal ran this play earlier in the game and threw to the wideout on the strong side of the formation on the quick receiver screen. Meanwhile, Sofele leaks out to the backside in a pattern. Utah has a weakside linebacker blitz called. 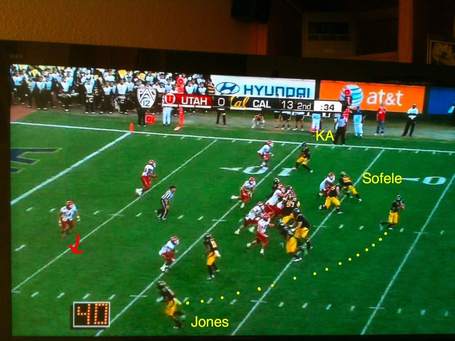 MSG cuts his man leaving an open throwing lane. Maynard looks back and finds KA on the quick hitch. Sofele moves past KA to pick off their CB. 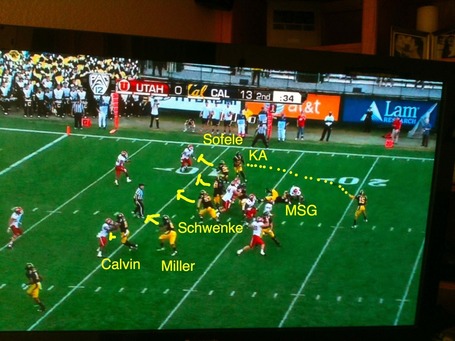 By the time KA catches the ball, he already has a convoy of blockers with Cheadle, Schwenke, and Miller all charging downfield. Sofele keeps his man locked up as does Calvin. 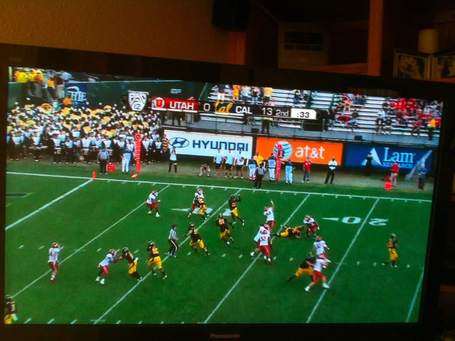 KA gets hit by two Utes at the 5 yard line...But he refuses to go down and continues to drive, drive, DRIVE! Sofele continues to stay after his man. 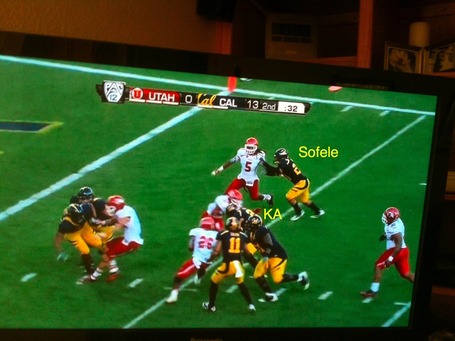 Sofele drives his man back and with one last push, puts the Ute on his backside in the endzone. This becomes significant moments later when KA is able to slip free. Because the last Utah defender is falling down, there is no one left to stop KA from staggering into the end zone. It becomes a decisive 20-0 lead going into half. 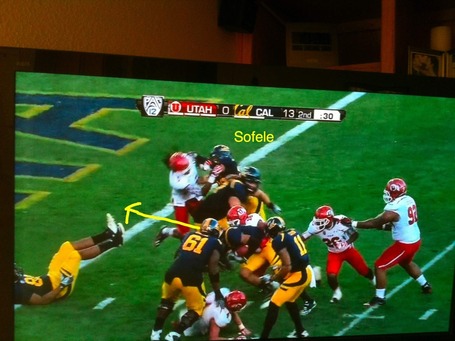 After their D forces a 3 and out, the Cal offense goes on their best drive of the game. Mixing up option plays, zone-read, power running, and play-action passing, the Bears are eating clock and wearing down the Utes.

Cal puts out an interesting spread formation: Debo lined up at a wing fullback, Maynard in the Pistol, Kapp as the deep back. Utah has 8 in the box and look like they're threatening a blitz off the edge. 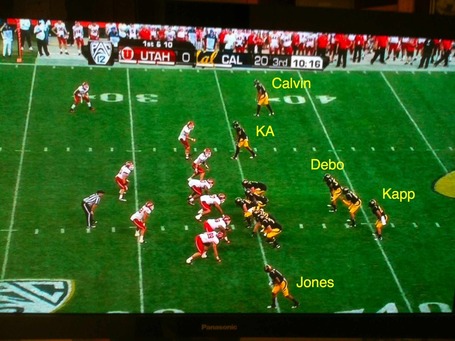 Maynard fakes the zone-read to Kapp. The Oline drive-blocks towards the top of the screen. Meanwhile, Debo leaks out in a pattern towards the bottom. The fake draws the Utah linebackers towards the line of scrimmage. The slot defender who was line up on KA either completely bites on the fake and charges upfield or was coming on a corner blitz. 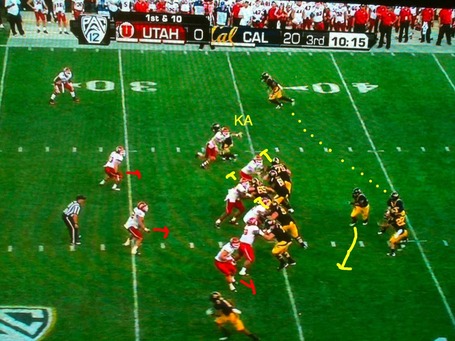 Maynard pulls the ball back and does a quick half-roll. He sets his feet and surveys the field. Calvin is open at the top, KA has run past the linebackers in the middle, and Debo is about to come free underneath. 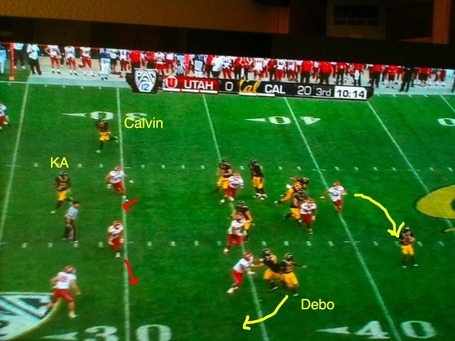 Maynard delivers a Zito strike - the ball is high, outside, and behind Allen. 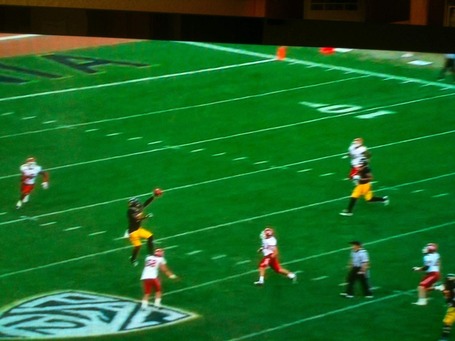 But KA is able to bring the ball in with one hand while spinning backwards. It's one of the best catches you'll ever see. Roll on you Bears! 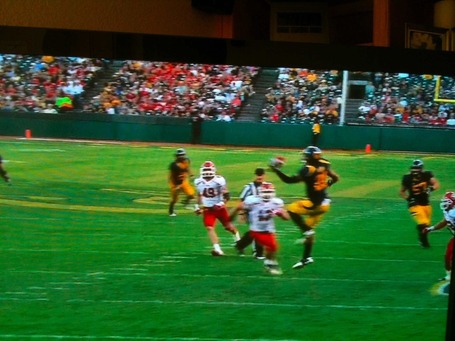 A few plays later, the Bears are threatening at the goal line. The Utah defense just stuffed a CJ Anderson strongside power run on 1st down. Cal has 21 personnel, 2 backs, 1 TE, 2 WR and lines up in the Pistol with Kapp as a wing and Sofele as the back. Utah shows an overloaded strong-side formation and appear to be threatening a run blitz. 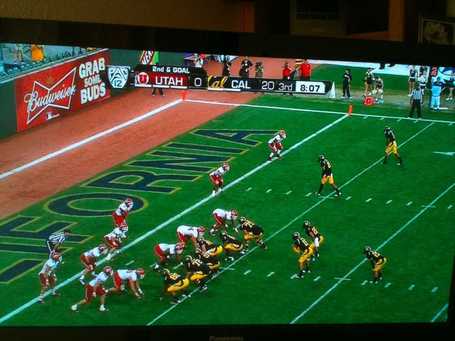 Instead of running strongside power this time, it's a zone-read! Maynard reads the defensive end. This time, the Utah player drifts inside towards Sofele. MSG and Cheadle have completely sealed their edge. Meanwhile, Kapp runs past the DE and looks towards the 2nd level. 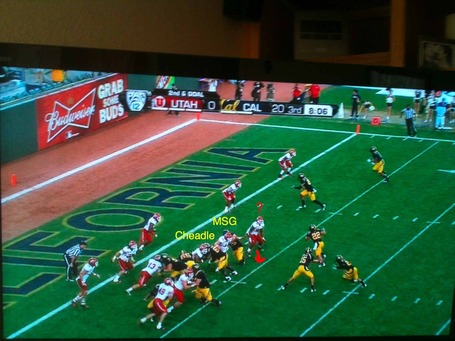 Maynard keeps it and heads around the end. Jones draws off the defensive back by running a corner route. 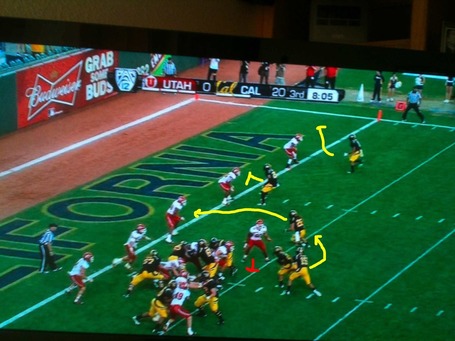 KA engages his man and Kapp takes on the safety. They create a wide-open running lane. 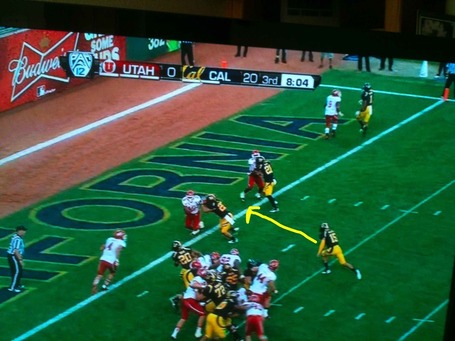 Maynard all but walks in. It's a great call against a defense keying on the strongside run and even better execution. Touchdown Bears! 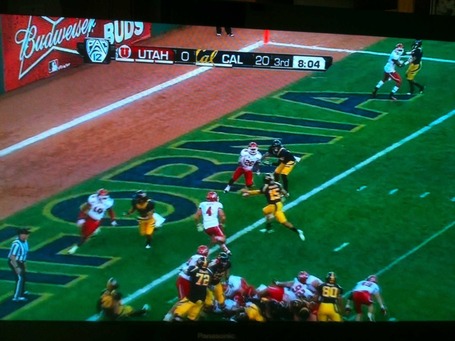 1) The Utah defensive line was as good as advertised. There were plenty of running plays that got stuffed for little gain when they only had 6 or 7 in the box.

2) Tedford did a really nice job attacking the edges of the defense early. By making their Dline run, it seemed to wear them down in the 2nd half.

3) It was really creative how many different ways and places they lined up KA besides his customary spot out wide.

In order to force mis-matches, they put either Miller or Calvin out wide and moved KA into the slot. This forced Utah to either play a nickel back, or use some type of combination zone coverage with LBs and safeties. I suspect that Tedford saw that the Utah defense didn't play a lot of man and wouldn't disrupt their formation by trying to keep their best corner on KA.

There were also plays when KA lined up in the backfield, and then motioned out to the slot. This stopped Utah from keying on him pre-snap, and also showed when Utah was in zone coverage.

And, there was a sequence of plays where KA went in motion back and forth along the line. On one of these plays, he continued the motion to release into a short swing pattern. On the counter play, he stayed in to block and helped spring Sofele for a long run.

4) That long drive at the beginning of the 3rd quarter was the Tedford offense we've been all waiting to see once we heard that Maynard was named the starting quarterback. He mixed up option runs, zone-reads, power-runs, play-actions, pro-style passing, and roll-outs. It was a diverse attack with a great rhythm that really kept the defense off-balance, and controlled a lot of clock. More please.

5) Breakout games for both Miller and Calvin. Both of them were tough all game long with blocking on the edges. On of the advantages of lining them out wide is that it creates an instant blocking mis-match against a smaller DB for quick passes or runs to the outside. Every ball that Calvin caught was for a first down - that's a nice bounce-back from a couple of tough games. Miller didn't have as many opportunities, but he did a nice job hauling in a deep ball while having one hand held by the defender.

6) Time to pick some nits - If we are going to use more designed QB runs, it might be a good idea to get your backup more playing time. At 34-0 with a dominant defense, I think that you'd want to give Bridgford at least a couple of series where he could run the full offense. The flip side here is that perhaps the coaches still feel like Maynard needs all the snaps he can get.

7) Okay, back to pumping sunshine. Maynard looked significantly more poised. His feet were quieter. He checked down when his primary targets were covered and threw it away when necessary. There were far fewer stare-down-of-death locking on moments and fewer forced passes. I thought that Tedford did a nice job of playing to Maynard's strengths and helped to keep him in his comfort zone.

I hope that this game was a growing moment; both for Maynard's development as a quarterback and for the coaching staff in figuring out how to best use him.

Next up: We'll take a look at some of the defensive highlights. Stay tuned... Go Bears!